Ohio was left out of the NCAA Tournament for the fourth consecutive year last season. The Bobcats felt they deserved a ticket to the dance after bringing a resume that included a 27-5 record, a Mid-American Conference East Division championship and a second-place finish in the MAC Tournament.

But it wasn’t enough. The selection committee favored the likes of other teams, and Ohio settled for the WNIT and fell to Northwestern in the Round of 8.

Ohio finished its historic year with the best record in program history. The Bobcats want more next season, and they’ll probably get it.

Here’s five reasons why Ohio will make the 2020 NCAA Tournament.

Coach Bob Boldon’s relaxed personality was a great mask to cover his disappointment when Ohio was left out of the 2018 NCAA Tournament. But Boldon is a man who knows what could have been. Last year, he often talked about how the 2017-2018 season hurt because the Bobcats were two wins away from the WNIT. Maybe the Bobcats missed out on the NCAA Tournament this season because it had one too many losses. Who knows? Boldon probably lost sleep over it. He’s built the Bobcats for a prolonged period of success, and that success still showed last season. The six-year head coach believes in his system but isn’t afraid to tweak to ensure the Bobcats have the best shot at winning.

At the end of a great season there’s always a dejected feeling because a team will never be the same. Seniors graduate and the top of a roster can take some heavy blows. But the damage to the Bobcats next season is minimal — they lost only three seniors. The loss that hurts the most is forward •Dominique Doseck, who was Ohio’s best 3-point shooter, smartest player and had strong leadership role in the locker room. The Bobcats also lost •forwards Olivia Bower and Kendall Jessing. At 6-foot-1, Bower provided Ohio with size and 3-point shooting, while Jessing produced rebounds and was one of the Bobcats most-respected voices in the locker room. Ohio will have to address those absences if it hopes to take another step, but the Bobcats are still young and talented. The future is still bright. 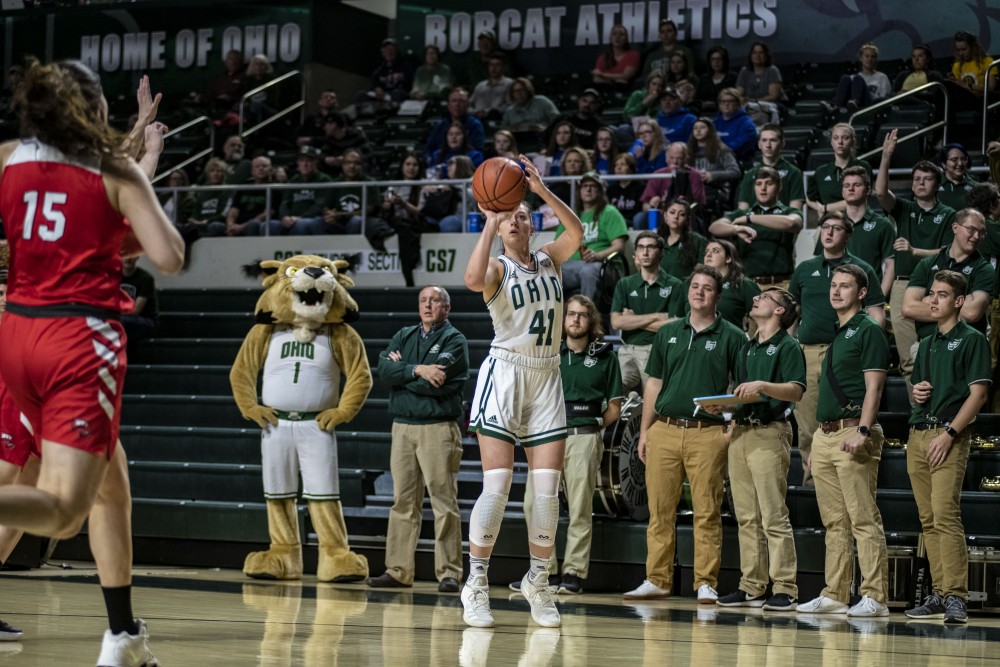 While the Bobcats will miss Doseck, Bower and Jessing, the amount of talent coming back is enough to make fans blush. Cece Hooks, MAC Defensive Player of the Year, will return. Erica Johnson, the first player in MAC history to ever win Freshman of the Year and Sixth Player of the Year is also back. Amani Burke, a 3-point sharpshooter, will round out the trio of top talent. Ohio will also have healthy versions of Gabby Burris and Katie Barker, who Boldon calls the best shooter on the team. The team will also be deep with Deesh Beck, Kaylee Bambule, Abby Gardner and transfer guard Caitlyn Kroll off the bench. Ohio proved it can win with a young roster last season. With those new players transitioning to veterans, the Bobcats are one of the most lethal teams in the MAC.

To go along with Ohio’s returning talent is some fresh faces. Peyton Guice and Ella Pope hope to continue the string of great Ohio freshmen that Boldon has produced. They won’t be expected to produce much early, but expect at least one to find themselves some minutes.