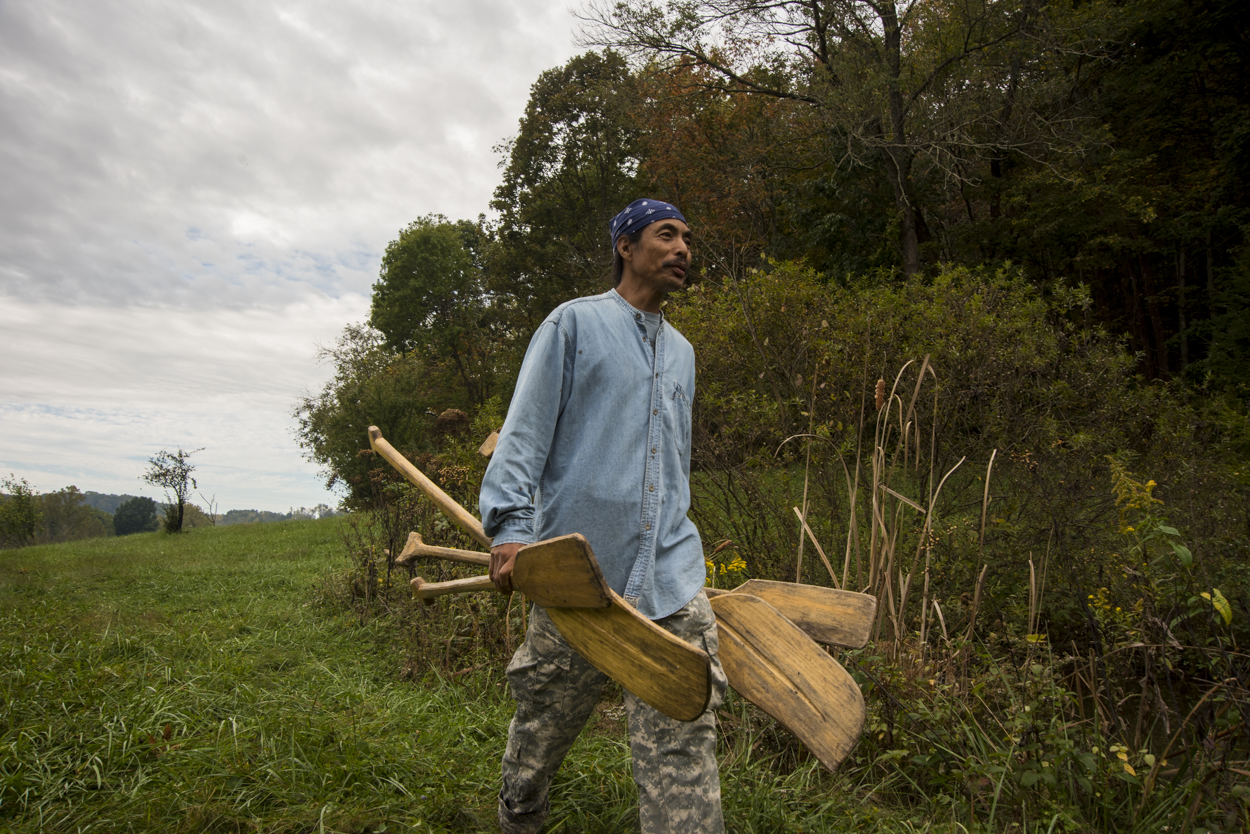 A life more valuable with less


Tracking down Mamerto Tindongan in the rolling landscape of southeast Ohio is no easy feat.

With no phone or daily routine, catching Tindongan can be tricky at best. However, as soon as you do locate the 59-year-old Philippine native, his warm, embracing welcome makes the challenge worth it.

A good place to start searching for the seemingly illusive man would be his wooded property in Albany. He will likely be found outside and barefoot, moving materials for his next project all while smiling. 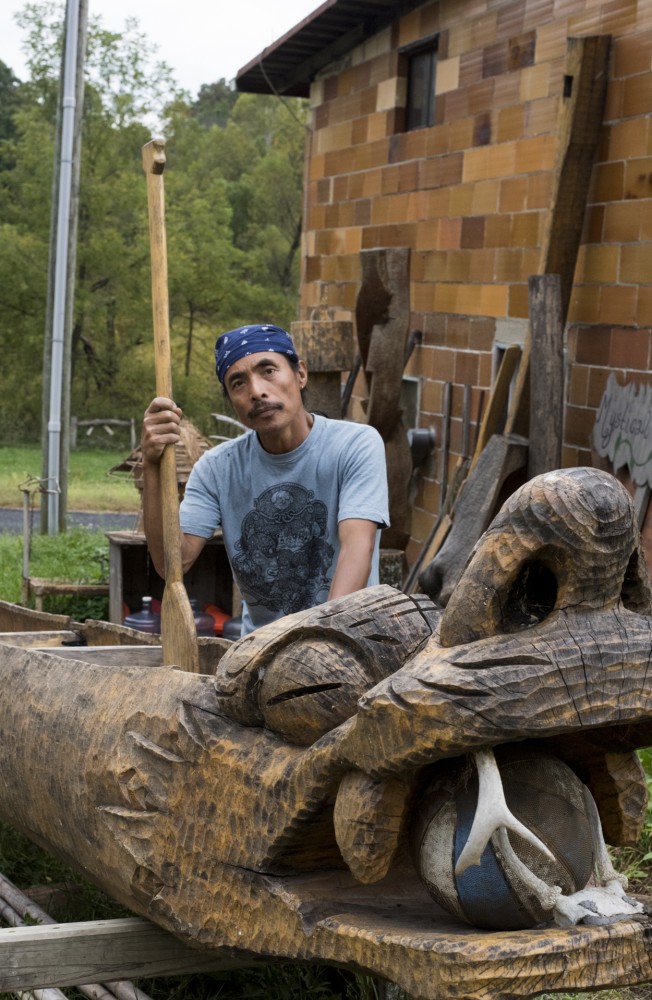 Mamerto Tindongan poses for a portrait with his hand carved canoe.

“He doesn’t want to go around and solicit people to follow him. You know, people just come to him,” said D.j. Fuller, owner of Athens Yoga and Seasons Holistic Arts in Amesville.

Tindongan, born and raised in the Philippines in the Ifugao tribe, is a man of many passions. Most people familiar with his talents call him a healer. Above all, he is a friend to many.

Since moving to the U.S. in 1991, Tindongan has been using his talents to inspire and heal anyone who would come to him seeking help. To name a few, Tindongan is a devoted practitioner of Kolaimni, the ancient healing art of light. He is a master woodcarver, a “world-class competitor in the ancient art of atlatl or spear throwing.”

His home and studio is always open to visitors and those wanting to learn something new. Tindongan said he is often asked by professors how his work is all connected.

“A professor asked me how is this hut, the canoe, the spears are related to healing, and I told them, this simple way of life — when you are doing it — it helps you remember who you are,” Tindongan said. “Simpler lives in the past I think people were happier.”

The lives he’s affected in the Athens area are many. Since moving to Albany, Tindongan has healed as many as 20 people a week and takes walk-ins.

“What I love about Mamerto is he’s very very humble,” said Patricia Minor, founder of Soul Purpose. “He’s very sincere and all he really wants to do is share his gifts and his art and his way of life.”

“I see Mamerto as coming full-circle,” Minor said. "He came here, went to university. He made it in the eyes of intellectuals and the scholastic community. And then I think that he really felt that … like there was still something left undone for him.”

After an unfortunate diagnosis of Meniere’s disease, a disease of the inner-ear that causes vertigo, years ago, Tindongan would discover through his illness what it was he was supposed to do in life.

“It’s the hardest thing for me,” Tindongan said. “You have to stay still. You don’t move any muscle. Even just moving your eyeball is enough to throw up.”

In 2005, he decided his illness would, in fact, be used to his benefit. It would improve his meditation, teach him discipline to avoid certain triggers of vertigo and be a way to connect to his high-self.

“Now I actually don’t see it as something bad — I see it as a blessing because it served as a warning, an antenna. … Now when I get (vertigo), I stay still, just sit down and meditate,” Tindongan said. “I learned how to do still meditation because of it, I had no choice.”

Turning a bad situation into a positive is on par with all other aspects of his life. When speaking to Tindongan, his stillness washes over everyone he meets.

Even his methods for creating wooden works of art, that being either a canoe, an ancient weapon or even an abstract piece. He approaches the wood with its nature in mind.


“He doesn’t really need to put on or create a special environment — he is the environment.” D.j. Fuller, owner of Athens Yoga and Seasons Holistic Arts in Amesville


“Even if you have a plan, the characteristic of the wood may actually change,” Tindongan said. “When you use machine, you can just cut straight but when you use simple tools there are times when you can not do what you want to do. … You work more with the wood versus what you want the wood to be.”

His skills for hand-carving masterpieces goes back to his deep Ifugao heritage. He first learned the craft of woodcarving when he was just 8 years old.

“There was no such thing as going to a classroom. Everything was just a way of life,” Tindongan said. “When you are a child, whatever interests you, you start to observe, to watch your elders.”

When he was young, Tindongan grew increasingly enchanted by the transformation of rough wood into something beautiful.

“I was fascinated by the way (elders) formed things,” he said. “Chopping, and then later on you see a figure coming out, and it evolved into something pretty.”

While Tindongan worked his way through his bachelor's degree in the Philippines and later graduate school in the U.S., woodcarvings were simply a way for some form of income. It became more of a way of life when he met former Ohio University professor David Hostetler in 1994.

Renowned for his own woodcarvings and bronze sculptures — Hostetler created the “The American Woman” outside of Alden Library — Hostetler and Tindongan bonded over their similar techniques.

“So David saw how I used my tools and said, ‘Oh, I’m going to hire you until I die,’ ” Tindongan said.

Tindongan would carve over 400 pieces for Hostetler during their years working together. For Hostetler, Tindongan said he was the young set of muscles that Hostetler no longer had but still needed to execute the sculptors.

After Hostetler died in 2005, Tindongan’s passion for woodcarving would shift from being a means of income to a part of a much bigger picture. Woodcarving would be just one way Tindongan would help those on the path toward healing.

“My interest went in a full cycle. At first, when I worked for David, it was for survival,” Tindongan said. “But then something happened to me that brought me back to that childhood way of perception or doing things.”

For many, this could be interpreted in many different ways. For Tindongan and those his work touches, it’s simple: The goal is to be free of fear.

“We were whole, we had everything we needed. We just forgot. We were mislead by this capitalistic and materialistic world,” Tindongan said. “So when you let go of that fear of not having enough you go back to your original makeup that’s made of beauty.”

The philosophy can be seen in all aspects of Tindongan’s lifestyle. His simplistic home, his possessions, the friendships he’s built and the healing work he now does around the community. 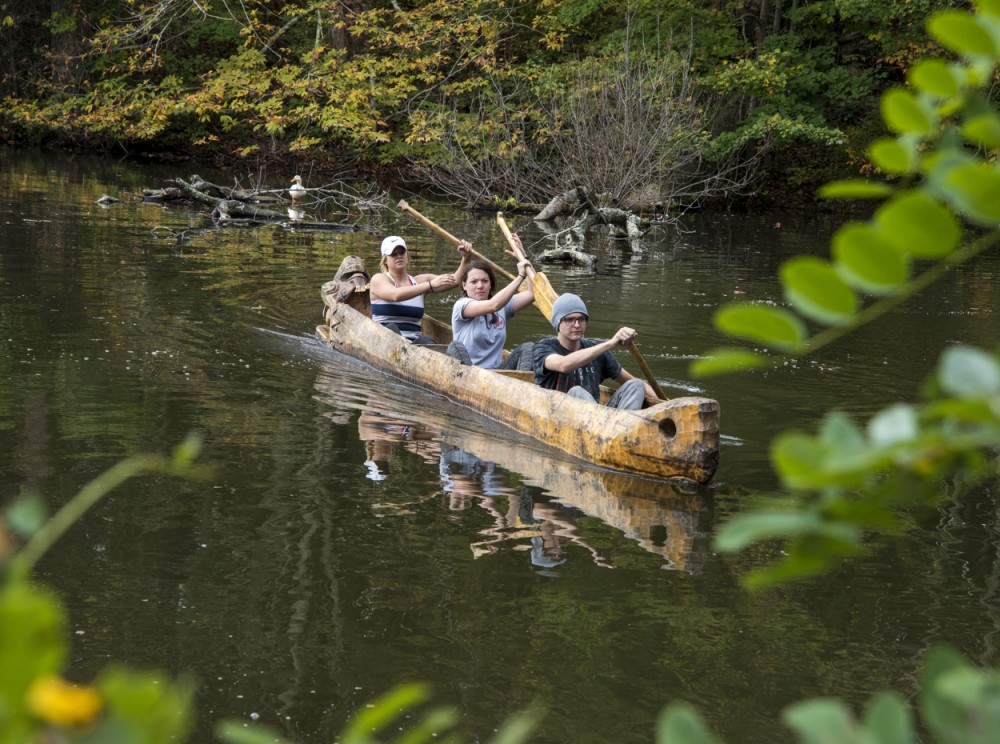 Student’s of Hocking College’s Eco-Tourism class take Tindongan’s canoe out on a pond to try out. The dragon’s head is at the back of the canoe to protect the riders from any dangers.

“If I needed a tooth pulled, I would go to the dentist — just like I would go to Mamerto for energy work,” Fuller said. “Whatever he can to help people get closer to their happiness and peace.”

When welcoming groups, students or anyone for that matter, enter his home to facilitate and teach the art of healing using one of his many techniques, a monetary exchange is not always even necessary.

“I don’t want money to deter people from getting the help,” Tindongan said.

As simplistic and wholesome Tindongan’s life seems, some sort of income is a necessity, however. So, as he plans to host more and more groups to his home for healing sessions, monetary donations are how he plans to move forward.

“He doesn’t really need to put on or create a special environment — he is the environment,” Fuller said. “It’s not like he puts on a suit and tie and goes to work to do it. Mamerto lives it.”