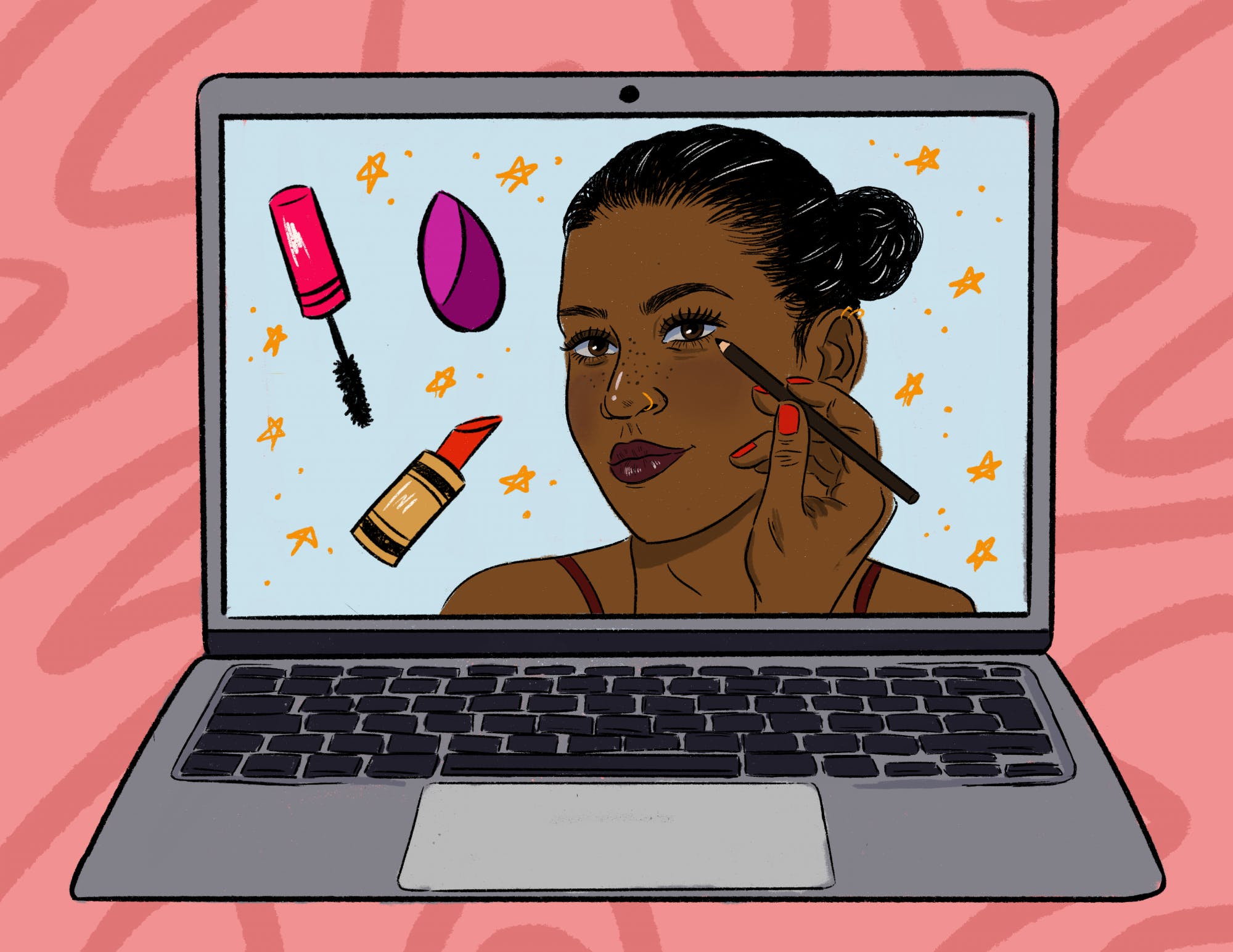 "There were no differences beyond the color of our skin," Volcy said. "And that's when it clicked to me … there's a reason (the TikTok algorithm is) pushing her content more than it's pushing my content."

Volcy is a Black content creator with over 120,000 followers on TikTok. She hosts the podcast Chat with Cat and is a 22-year-old college student from the Washington area. Similar to other creators, she started making TikTok videos about a month into the COVID-19 pandemic.

She started creating wellness and self-care content "randomly," she explained. At the beginning of the COVID-19 pandemic, Volcy was barely eating or getting out of bed, and creating videos helped her take care of herself.

"I was definitely targeting Black women and girls because there's not enough Black women on this app doing self-care things," Volcy said.

Volcy said Black women are usually seen in entertainment and not necessarily in beauty and wellness.

On top of her white counterparts earning more views on carbon copies of the same video, Volcy said she deals with blatant racism and racial microaggressions in the comments section.

"I'm a Black creator," Volcy said. "I'm speaking on Black issues [and] Black topics. Sometimes … (people) like me as a person that speaks to wellness and things that they need, but they don't necessarily want to hear me speak about Black issues."

With the viral nature of videos on TikTok, trends quickly pop up in the beauty community. The "That Girl" trend, commonly seen in self-care videos, encourages viewers to eat clean, practice self-care and wake up early. Creators say it is a trend that overwhelmingly represents white women, with the hashtag #thatgirl garnering six billion views on TikTok.

"It's a very pretty, white girl who's really thin, wearing … $250 workout sets and making her all-white bed," Eli Rallo, also known as @thejarr, a TikTok creator with over 540,000 followers, said. "And then having her juice in her perfect glass and her perfect toast and then doing one 10-minute workout. We don't really know what she's eating or doing in her real life."

Rallo, a college graduate living in New York City, said the frequency of this type of content has become ridiculous.

"When we are on the internet, everything is – at some level – directed," Rallo said. "People aren't showing you the fight they got in with their boyfriend this morning."

Rallo used Emily Mariko as an example of the "That Girl" aspiration. Mariko, a creator on TikTok with nearly 12 million followers, became popular for her recipe videos on the app: specifically, a spicy salmon rice bowl . In short, Mariko fits traditional beauty standards.

Rallo said if this lifestyle actually reflects your personality, that is fine.

Rallo also pointed out that very few videos in this trend are made by women of color, plus-size women or trans women.

"None of them are falling into any minority communities," Rallo said. "They are the beauty standard. It started to frustrate me because if I tried to make that video, I can't explain to you how much it would not f––ing work. My sheets are purple, and there is blood on them because I can't get it out … I love glitter, my American Girl (dolls) are sitting right to my left, I have stacks of books everywhere."

Instead of aspiring to be "That Girl," Rallo's motto is to focus on "This Girl." The message is one of self-love, self-worth and acceptance.

Rallo also spoke on how trends such as "That Girl" lack diversity and are rooted in misogyny. If a "That Guy" trend existed, Rallo thinks it would look like rock 'n' roll, sex, money and power.

For women, becoming "That Girl" encourages girls to shrink themselves, to become not only physically smaller but also lead a minimal lifestyle, Rallo said.

"Sure, on some level, there would be some toxic stuff," Rallo said. "You would still see the money, that wouldn't go away – the classism that's embedded in this."

Matthew Campos, a creator on TikTok with over 454,000 followers, creates short daily vlogs of his day that often feature self-care content such as his skincare routine, cleaning and meals. However, Campos said there are not nearly enough self-care resources for men.

Campos said he started creating videos on TikTok in October 2021 because he has always been interested in photography and videography. He started getting into self-care through his mom, sister and girlfriend.

Campos said he is not sure what kind of content box he fits into, but his wellness and skincare are what get the most attention.

"Just seeing how many people question me on a day-to-day basis on my videos, 'Hey, what's your skincare routine?' or 'Hey, what products do you use?'" he said. "And shockingly, it's mostly men. I think it's because they see another guy doing it and they can relate to that."

Campos said he interacts and follows men of color who create self-care content. Nevertheless, he agreed the space needs to be more inclusive.

"My family are immigrants, so I just always gravitated toward that," Campos said. "I just followed creators that either look like me or I would be friends with, people that I'm similar to or that [I] relate to."

Alexis Ky, a senior at Ohio University studying nursing, said she sees an increase in diversity and wellness content online, specifically in Asian representation. As Thread Magazine's makeup director, she consumes a ton of beauty content on social media.

"Because I am of Asian heritage, I would say [my social media] is pretty diverse because I go out of my way to look for it," Ky said.

She attributed an increase in representation to aspects of Asian culture becoming more popular in the U.S. Trends such as Korean skincare routines, bucket hats and Chinese street fashion are becoming more mainstream, she said. Despite this, Ky still feels like she has to search for it.

"We do not focus too much on where our trends are coming from," Ky said. "Like Gua Sha – we know it's an ancient Chinese beauty routine, but I feel like a lot of people don't actually know the history behind it. Same with other fashion trends like body chains, people don't focus on where that originated from … My issue with stuff like that is that we just go along with it, but don't appreciate how it came to be."

She encouraged others to research these trends and ask questions to those part of specific cultural groups. In turn, this fosters cultural appreciation rather than appropriation.

"Not everyone's culture should be a trend," she said. "If you're only doing it because you like the way it looks, you're not actually appreciating where it's coming from and the way people live."

"Now, I would say I start to watch a lot on TikTok and Instagram, those are definitely my top two," she said. "I definitely see myself consuming both of those not only for entertainment purposes and education, but just to see what people enjoy so that I can apply that with my job."

Serbia is also the president of El 787, a club created for students of Puerto Rican descent.

"Being Puerto Rican, I see a lot of Puerto Rican content creators, especially in beauty since that's something I really do enjoy," Serbia said.

Serbia said that as a white Latina, she relates to content creators who receive similar comments.

"It does shock people sometimes that you can be white and Latina," she said. "Now, I'm seeing more Puerto Ricans that look like me … They always get the, 'Oh, you don't look Latina' comment all the time.'"

In addition to this representation, Serbia said she also sees trends that are not inclusive or appropriate. She cited the "clean girl aesthetic " trend on TikTok that encourages gold jewelry, a neutral color palette, a fresh face and slicked-back hair.

"A lot of Latinos, specifically women, are voicing their opinion on how that was what they grew up looking like with the slick back bun," Serbia said. "All this 'clean girl aesthetic' stuff that now is popular because white girls did it."

The solution? Increased transparency. Serbia said this is why influencers like Emma Chamberlain are so popular, because of their authenticity.

"Of course, your day-to-day life doesn't look like that," Serbia said. "Now with the influx of people wanting to be influencers and content creators, you can tell when people are being disingenuous … if you're lying about that stuff, think about all the girls who have eating disorders or are self-conscious about themselves because they see that [content] and think it's real."

Serbia also encouraged creators to listen to their followers who are a part of minority groups when taking part in trends with cultural roots. She also said creators should be held accountable online.

"You need to be talking about and drawing attention to this, and you also need to be simultaneously holding the door for creators that don't have the same privileges," Rallo said, speaking from a creator perspective.

Volcy echoed Rallo's concerns that wellness content can not only be unachievable and unattainable, but especially harmful to young users.

"They are extremely impressionable," Volcy said. "They are like, 'Hey, I don't look like that, so I can't be that.' To me, it can distance wellness from people … I've never not once captioned or hashtagged 'That Girl.'"

Volcy said she understands why this content continues to be perpetuated by creators because it gets views. Still, Rallo encourages other creators with privileges, should they be white, thin or conventionally attractive, to use their influence for good.

"If you have a day where you sleep in, or you don't feel good, or you don't work out, or you eat f––ing McDonalds, for god sakes, that's all allowed," Rallo said.