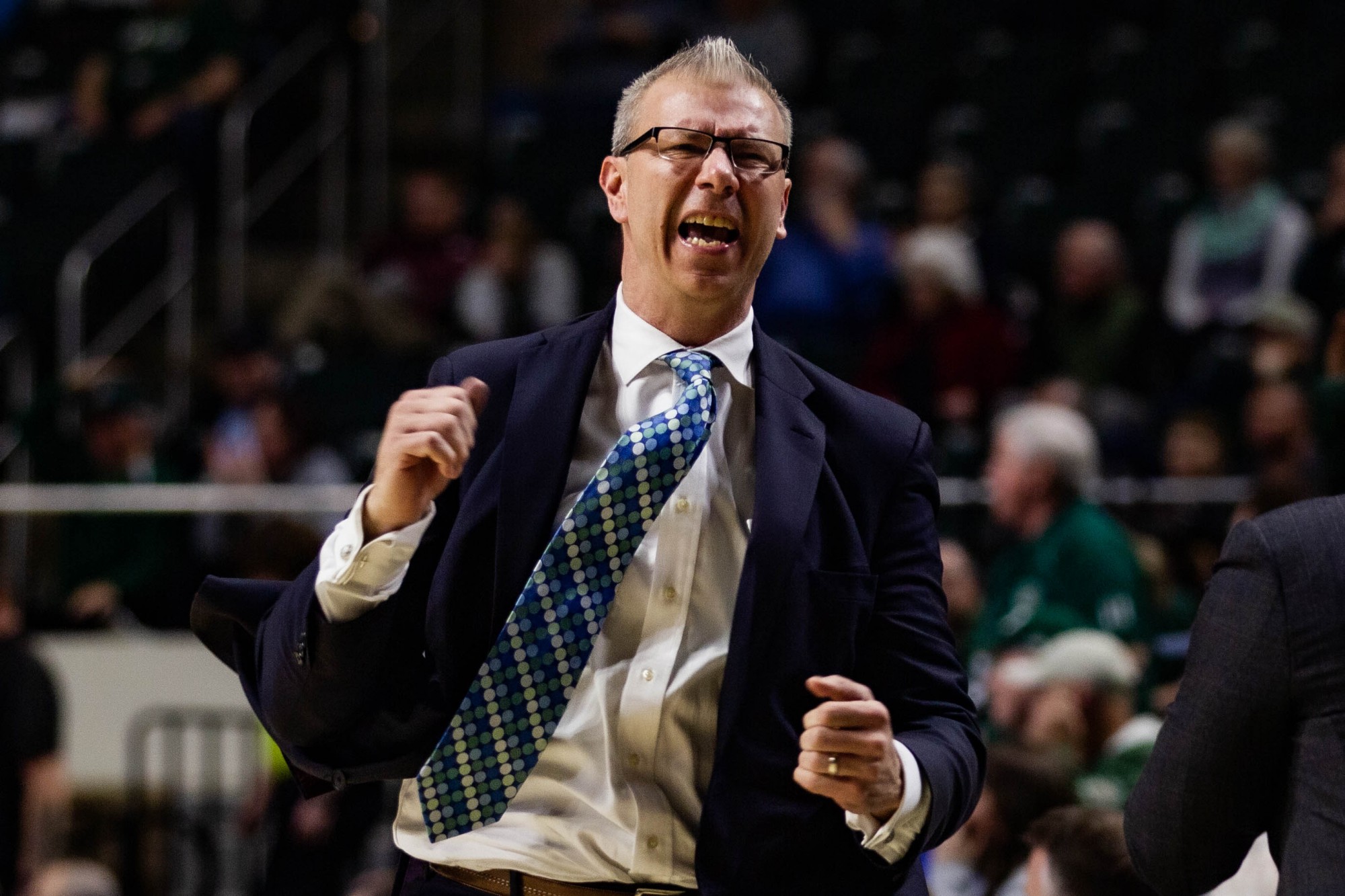 Head coach Jeff Boals cheers during a conference game against Central Michigan University at the Convo on Tuesday, Feb. 18, 2020.

What do fans think of the first season in a new era of Ohio basketball?

H undreds of Ohio fans sitting in the sections behind the home team’s bench are attentively tuned into the Bobcats’ game against Central Michigan at The Convo.

Most of the people are Athens locals. They’re locked into the action on the court and observing the work of coach Jeff Boals, who’s nearing the finish line of his first season with the Bobcats. Ohio will end what was supposed to be a transitional season in the bottom half of the Mid-American Conference standings.

The fans, for the most part, are OK with that. They understand where the program is and — hopefully — where it will be in the future under a new coach. They’ll be at The Convo regardless, eager to see when the basketball program will turn a corner and ascend back to one of the conference’s dominant teams.

“You got to give new coaches some leeway and some breaks,” said Rick Hartung, who’s been attending games from his seat a dozen rows up from Ohio’s bench since the ’70s. “I think Jeff’s done a wonderful job.”

Most fans would agree with Hartung. Ohio is 6-9 against MAC opponents this season with three games to play and is 4-3 in February. Four of the Bobcats’ MAC losses have been decided by one possession.

Sure, some of the close finishes have been frustrating for the fans, but they know that Ohio is capable of winning those games soon. The Bobcats entered the season carrying eight freshmen and will only graduate two players, Jordan Dartis and Sylvester Ogbonda, after this season.

Boals was hired in March after coaching Stony Brook for three seasons. He didn’t receive a full offseason to recruit players for his new program but still hauled in a class of promising recruits, which included 2018-2019 Ohio Gatorade Player of the Year Ben Roderick.

He’s also helped returning players who were recruited under previous coach Saul Phillips, who’s now the coach at Division II Northern State, take the next step in their game.

Sophomore guard Jason Preston has spent most of the season top five in the nation in assists. Redshirt sophomore Ben Vander Plas is 10th in the conference in points per game. Dartis, a redshirt senior, became Ohio’s all-time 3-point leader Feb. 8 against Miami.

But the Bobcats have seen growth in their newest additions, too.

Freshman guard Lunden McDay has become one of the Bobcats’ better defensive players and has flashed potential on the offensive side of the court, too.

Roderick, meanwhile, scored a career-high 21 points Tuesday against Buffalo. He opened that game with three quick 3-pointers and was arguably the best player in Ohio’s biggest win of the season.

“A lot of these guys were in high school last year,” said Heather Cumbo, who’s attended games for the last two decades. “They’re doing really well. Coach Boals is just wonderful. I think he’s going to be here for a long time and be a really good coach.”

If the Bobcats win Friday against Kent State, they’ll surpass their win total from last season. Ohio is currently the ninth seed for the MAC Tournament, but if the Bobcats can win two of their final three games and move up just one spot in the standings, they could be in position to host a first-round game at The Convo.

“We all wish we had a better record right now,” Hartung said, “but we’ve lost a lot of close games. We’ve seen improvement from the first game to today. I think Jeff will do well here, and I think he’ll be here a while.”

From the fans’ perspective, things appear to be going up. Most of them believe the Bobcats should be back at a competitive level in another season or two.

By then, their current crop of young talent could develop into one of the premier teams of the MAC.

“Maybe in a year or two,” said Myles Kiphen, who’s been attending Ohio games for over 35 years. “I think the players he’s brought in are great. He plays as many people as he can, and their intensity is good. I think they really like playing for this guy.”