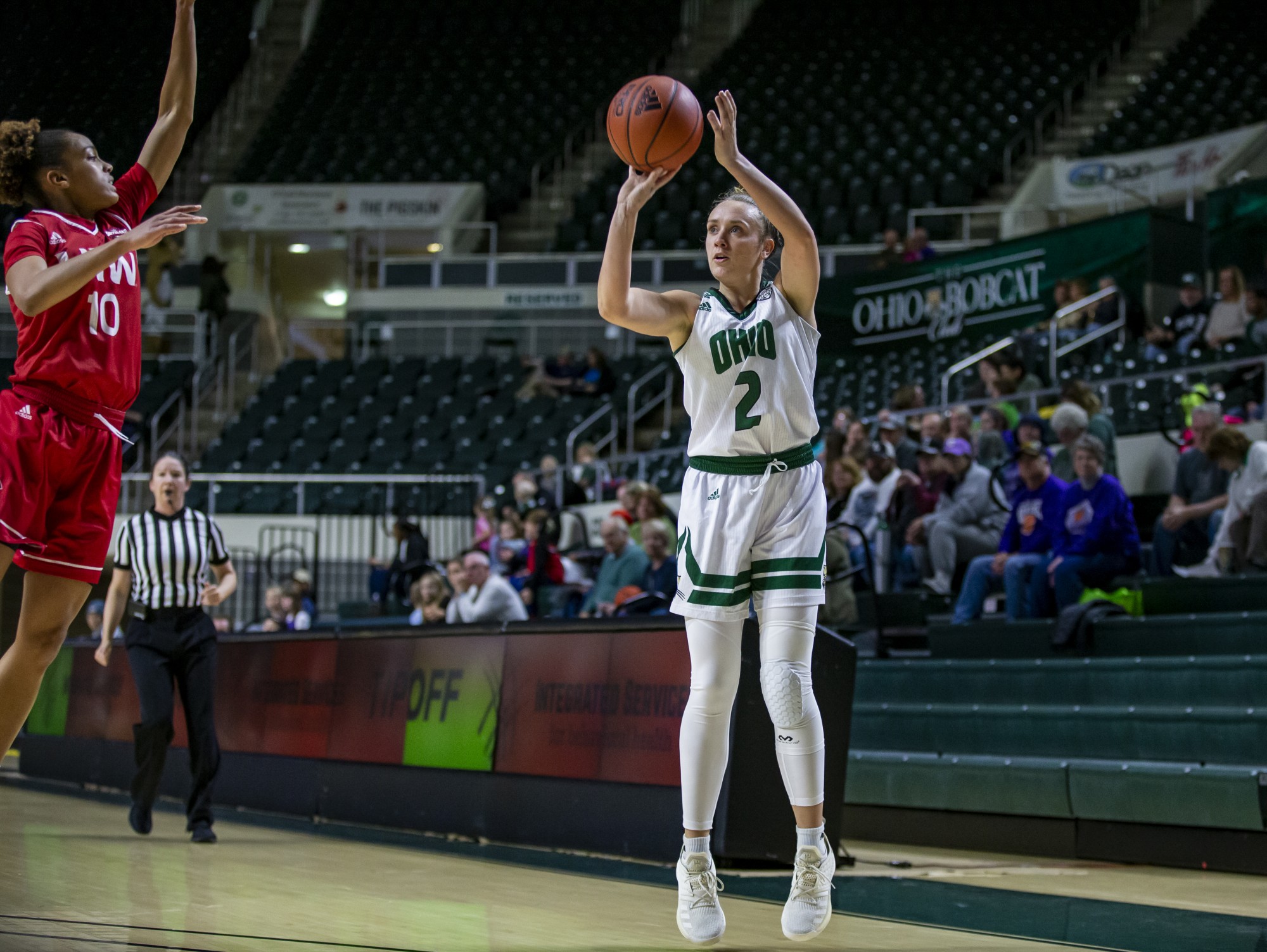 Ohio University guard Katie Barker (No. 2) shoots with pressure from The University of the Incarnate Word guard Victoria Jackson (No. 10) on Nov. 23, 2019.

T o Katie Barker, basketball is a matter of life and death.

The sport has given her joy since she was a little girl growing up about an hour outside of Chicago. It's allowed her to see the world and meet amazing people.

But as Barker held an MRI scan inside the Wexner Medical Institute in Columbus in November 2018, all she could think about was the possibility of a basketball-induced death.

“It was more scary than anything,” Barker said. “There was a point in time when you know it was a life and death matter.”

Since her days playing at Cary-Grove High School, the Ohio shooting guard has battled through a slew of injuries.

In her sophomore year in high school, she faced a torn meniscus in her right knee.

During senior year she was plagued with pain in her left knee.

She missed her freshman season at Ohio because she needed platelet-rich injections in her left knee to ease more pain.

During her redshirt freshman year with the Bobcats, literal blood, sweat and tears followed Barker into the training room due to the pain of a torn labrum in her left hip.

She came back, and she still played 30 games that season.

So, when Barker went to get her stitches taken out following surgery for another torn meniscus last season, she knew she’d be back, too.

But that trip to the doctor only uncovered another battle for Barker to face. The MRI scan in her hands was bright red. Blood clots were scattered throughout her lungs.

“My chest was lit up like a Christmas tree,” Barker said.

The pain in Barker’s chest sharpened. Her blueish grey eyes started to swell. Tia Jameson, Ohio’s director of Basketball Operations, could see the fear as she tried to console her.

“She doesn’t show when she’s scared and nervous,” Jameson said. “But I knew genuinely that day she was scared.”

In the midst of her fear, though, Barker knew she was blessed.

Six days earlier, Barker suspected she had a blood clot in her leg after sitting in the car for hours following surgery on her meniscus, but the doctors didn’t find it. When she went home that night, she treated the pain in her leg like a muscle strain. The heat from that improper treatment was what dislodged the clot into her lungs.

Now that Barker knew what she was fighting, she could prepare for battle. The doctors immediately gave her blood thinners and needed her to solely focus on recovery.

“I wasn’t even thinking about basketball,” Barker said. “I was just thinking, ‘I have to get healthy and make sure I don’t die.’”

Barker wasn’t thinking about basketball, but her team was thinking about her. The next day, Barker’s friends, teammates and Jameson were there by her bedside. Coming back wasn’t going to be easy, but she had support.

“The fact that I was able to be there at that moment for her was a blessing for me,” Jameson said.

The next few months for Barker felt tougher. The thinners took care of the clots, but the anxiety from the ordeal weighed on her. A bulky cast from the surgery impeded her ability to walk. Her chest ached from the scars in her lungs. The worst part was she couldn’t do what she loved.

“It was definitely my hardest recovery process,” Barker said. “I would come out of shooting drills with a purple face from the lack of oxygen.”

Basketball was teasing her constantly. Why did she have to be the player on the team plagued with injuries? Why couldn’t she be the one making 3-pointers from the corner to the cheers of fans in The Convo?

Instead, Barker was confined to the bench. It would be weeks before she could even start rehabbing. The urge to return back to the court was overwhelming at times. Barker saw how Ohio was thriving and running teams out of the gym.

She desperately wanted to be a part of that. It wasn’t jealousy, though. Barker knew her time was coming, and when she finally returned, she would only enhance the special team Ohio was putting together.

So she rested. She watched how Erica Johnson ran the offense, how Cece Hooks grew as a player and how Gabby Burris utilized her versatility. Barker knew her 3-point shooting would be a magnificent fit.

Once the cast came off, Barker was free to return to the court. She was far from being able to practice with the team, but she knew she was on her way back.

Hours before games, Barker was often the first on the court. Sweat dripped off her blonde hair as she shot 3-pointer after 3-pointer. She’d put on a show for any fans arriving early.

She didn’t have to be out there. She could have relaxed on the bench and cracked jokes, but basketball meant too much to her.

“It’s resilience,” Jameson said. “The fact that she’s that resilient, that tough and has that much passion is a true testament to her.”

Not everyone could come back from a life-or-death injury, but nothing has ever kept Barker permanently off the court.

It had been a long time. Barker’s journey was marred with pain, sadness and frustration. It took a lot more than a few steps to make it from the end of the bench back into the starting lineup.

Now, as a redshirt junior, she’s averaging 7.1 points per game for an Ohio team inching its way to a second consecutive Mid-American Conference East Division title.

Barker shows no signs of a player that’s had multiple surgeries and a death scare. She’s all smiles when she’s on the court.

The meniscus tears, the torn labrums and blood clots can’t stop her. Basketball is in her blood.

And she will come back.