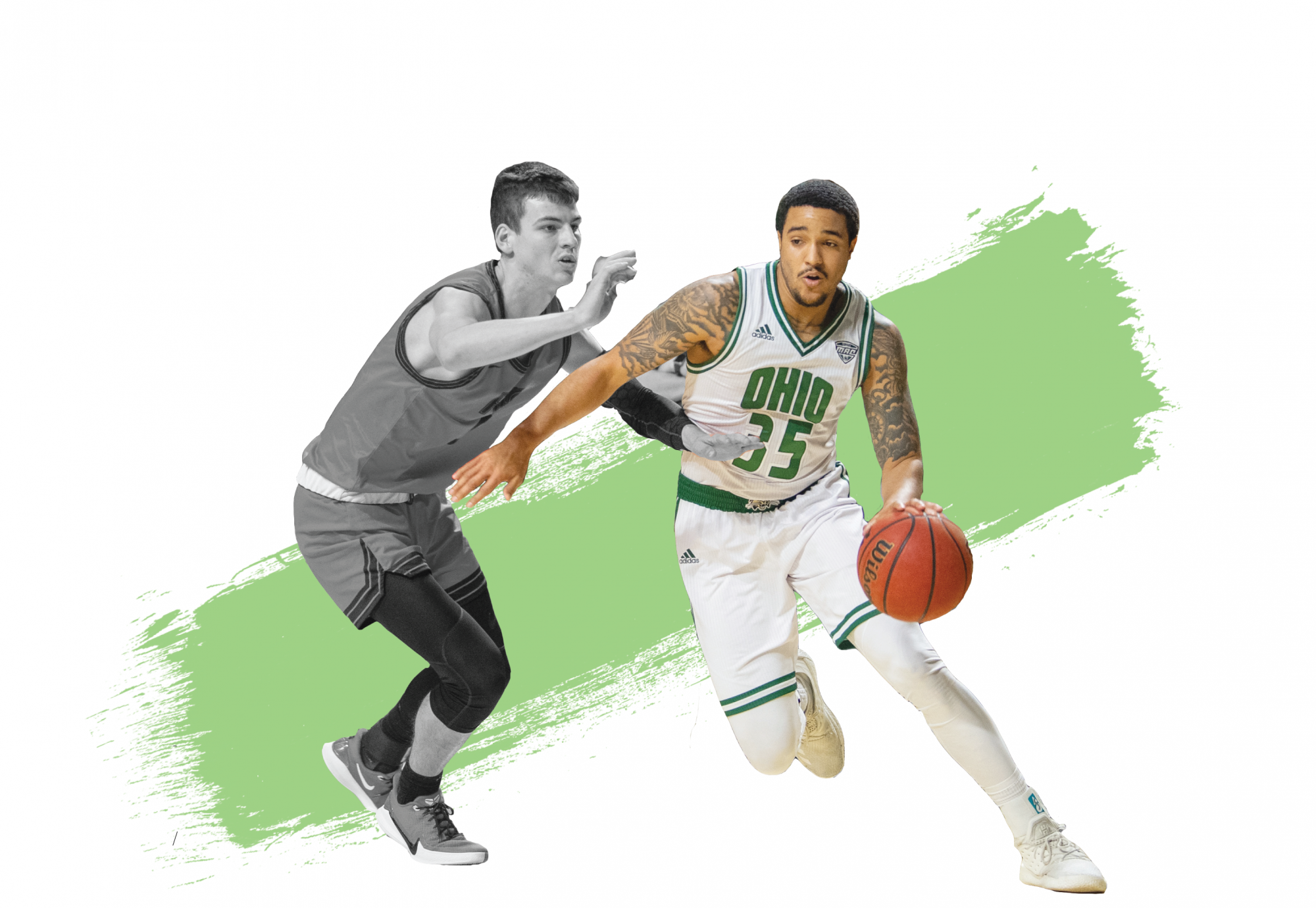 Jordan Dartis, the “Old Man” and lone survivor from a rocky era of Ohio basketball

J ordan Dartis seems at ease as he coasts through his pregame rituals. Walking from one end of The Convo floor to the other, he flashes his pearly white teeth as he shares laughs with his Ohio teammates.

One of the few in sweatpants, Dartis, 23, is the oldest player on the floor.

Teammates and coaches tease him about his age, too. Some call him “Old Man,” a nickname that fits because he’s two years older than almost everyone on the youngest roster in the Mid-American Conference.

“Ah, the ‘Old Man!’” Dartis said. He laughs heartily and shakes his head. “We’re just clowning, man. We’re having a good time. It just takes me a little longer to get warmed up.”

After seasons of injuries, transfers and adversity that have put him in a position for a final ride he didn’t have to take, Dartis, a redshirt senior, has become the unquestioned leader of the Bobcats.

In the big picture, he’s proved a survivor. He’s the last man standing from an era of Bobcat basketball that featured substantial shifts from sky-high hopes to disappointing finishes.

“I’m just blessed to be back,” he said. “It’s my fifth year, and I feel good. I’m just grateful to have the opportunity to play again.”

It didn’t take long for Saul Phillips to fall in love with Dartis when he made his first visit to Newark High School in 2014.

A school custodian approached Phillips as he walked into the school’s gym to scout Dartis.

“Who are you?” the custodian asked.

“Oh, Jordan,” the custodian said with a smile. “He’s one of the nicest kids that has ever come through here.”

Phillips recalled the conversation six years later. He could see why the custodian complimented Dartis as soon as he met him.

Dartis always emitted an abundance of kindness and positivity, and the qualities seemed genuine. Those weren’t traits Phillips had always seen in high-school recruits.

“It just came to me within seconds of stepping foot (in the school),” Phillips said. “Jordan had the qualities that brought everybody into him. I liked to coach that kid a lot. Not only was he talented, but he was the kind of person I wanted to be around.”

Dartis was talented on the court, too. He was a mainstay in Ohio’s starting lineup by the end of his freshman season, and he developed a knack from the 3-point line during his sophomore season when he led the team in 3-pointers per game.

But the solid foundation of talent that Phillips assembled under Dartis began to crumble after his second season.

Antonio Campbell, who led Ohio with 17 points per game in Dartis’ freshman year, ended his career after breaking his foot midway through his senior season. Jaaron Simmons, who averaged over 15 points per game from 2015-17, transferred to Michigan.

The two players who anchored the Bobcats before Dartis arrived had left earlier than expected. Phillips had promising prospects who could potentially fill the gaps, but for Dartis, the landscape was different.

Despite the change, Dartis remained positive. He continued to joke with teammates in warmups; he built relationships with team personnel; and he exuded the same charm Phillips saw from his high school workout.

“Sometimes, you feel like he’s putting on a show for you,” Phillips said. “But he’s like that when nobody is watching. That’s just how he is. He’s got a gift with people.”

Obstacles for Dartis were still ahead of him.

The next one proved out of his control. It was his left hip, and it was bothering him.

Originally, he felt the pain in high school, but it subsided in his first two seasons at Ohio before it picked up again in his junior season, Dartis said.

His left hip started to bother him again when he made a push-step while on defense in a preseason practice. Phillips walked over and offered a hand to lift him to his feet, but Dartis couldn’t take it.

“I need a sec,” Dartis remembered telling Phillips. “This is pretty painful.”

Dartis stood up a few seconds later, but the pain never went away.

Then, he injured his right hip.

It happened in November of that season in the Charleston Classic against Indiana State, Ohio’s third opponent in the three-day tournament. The Bobcats needed four overtimes to win one of the longest games in program history, but Dartis — who played 54 minutes — was in serious pain.

Dartis didn’t stop playing. He felt as if he couldn’t.

He knew that Ohio needed him to lead a team of inexperienced players who lacked a replacement for freshman Jason Carter, who emerged as a reliable option alongside Dartis in 2016-17 but who suffered a season-ending leg injury three games into the season.

So Dartis underwent a series of cortisone injections and occasionally missed practice to nurse the lingering pain.

That’s when Dartis began to change — not necessarily in his play, but in his mind.

“Mentally, it was so draining,” he said. “At that point in time, basketball wasn’t fun for me anymore. I was just reaping the benefits of college and having my education paid for.”

Dartis limped his way through the rest of the season. But his offseason required two surgeries and a lengthy timetable for recovery. He missed his senior season, which could only be salvaged with a redshirt.

And without Dartis on the floor, the prospects for Ohio in the 2018-19 season were even more unknown.

The low point for Dartis came in the summer practice.

He was sitting, not playing, when the Bobcats held their first practice in what eventually became a pivotal year for the program.

He couldn’t smile in warmups or joke with teammates or bring positivity to the court because he wasn’t on it.

“Just seeing them work all summer and just not being a part of it — that was a big moment where I was feeling sad,” Dartis said. “When the first game started, it was just surreal that I wasn’t going to play that year.”

He watched as the Bobcats crumbled. They were inconsistent and lacked the identity Dartis helped build when he joined the program three seasons earlier. He couldn’t do anything to help, though.

His positivity was apparent when he was around his teammates. He still struggled when he thought about what was next.

“Sometimes, you feel like he’s putting on a show for you ... but he’s like that when nobody is watching. That’s just how he is. He’s got a gift with people.”- Saul Phillips, former head coach of Ohio University's mens basketball team

Not for the program, but for himself.

“There were thoughts about it,” Dartis said. “Well, not about should I quit, but is it worth it? Is it worth going that extra mile?

Ultimately, he decided going the extra mile was worth it, but he didn’t feel confident in that decision until last spring when he could finally return to the court.

To play again, however, he needed to cope with more changes.

Phillips, who now coaches at Division II Northern State, was out after the Bobcats went one-and-done in the MAC Tournament and finished the 2018-19 season 14-17.

Carter, Teyvion Kirk and Anthony Cowart Jr. also left. All three were frequent starters in Phillips’ final season, and all of them transferred upon the arrival of new coach Jeff Boals.

Ohio had new players — eight of whom were freshmen — and a new coaching staff. The Bobcats were rebuilding. They were unlikely to be any better than the teams Dartis previously played with.

For the new era of Ohio basketball, he would be the only constant.

Dartis holds no ill will toward teammates who left the program.

“I hope the best for them,” he said of the transfers. “I think they made the best decision for themselves.”

Now, Dartis has a new supporting cast, and he’s embraced his role as the veteran on a young team. He’s OK with that role, too.

He’s back playing for a school he’s devoted four years to. His current teammates have embraced the “Old Man” among them and have helped make his last season at Ohio memorable.

On Feb. 8, Dartis became the program’s all-time 3-point leader when he splashed his 291st. At the next timeout, teammates showered him with cheers and high-fives, and his achievement was celebrated with a pregame ceremony in the next home game.

To Dartis, the record reflected more than his ability to shoot 3-pointers. It showed his resilience. He fought through pain — both physically and mentally — as he underwent near constant change around him.

With the record, his name will long be remembered.

“When I look back, it’s like, man, I’ve been at OU for four years,” Dartis said. “Why would I want to lose something that’s so pivotal to me?”

Dartis could be resentful of his teammates who gave up on the team. He could also have regrets for not opting for surgery sooner in his career when he first felt pain in his hip.

Looking back at his college career, the “Old Man” can only discuss all of its ups and downs in a positive way.

“That made me who I am today,” Dartis said. “There’s a fan base here, and I got a lot of respect here. I wanted to give them one last show.”