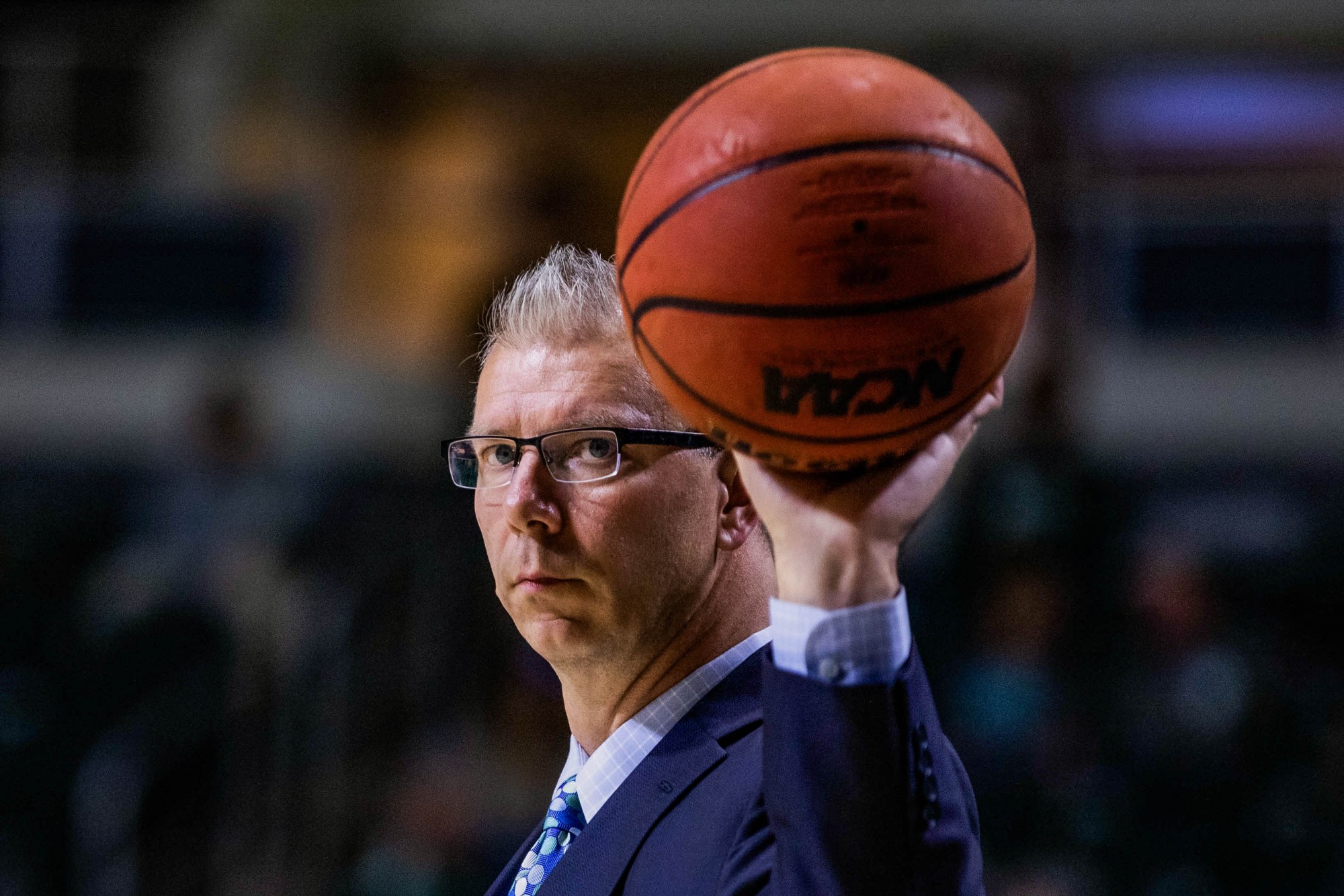 Jeff Boals, the new Head Coach for the Ohio Bobcats men's basketball team, catches the ball after it bounces out of bounds in the first match of the season against Capital University in the Convocation Center on Saturday, Nov. 2, 2019

Jeff Boals is living out his dream

J eff Boals sat in his office in The Convo on an unseasonably warm February afternoon.

Dressed in a green Adidas polo with the Bobcat logo above his chest, Boals shifted from his chair to one of the two black leather couches that were parallel to one another.

A loud hum from his personal refrigerator pierced the room, ensuring that his 24-pack of Aquafina water and two logs of Johnsonville summer sausage remained cool.

“You can just see it in him every day...The energy that he brings every day to practice, to every film session, to every team thing we have. He just loves being here.”-Vander Plas

He never initially wanted to be a coach, but when his former head coach Larry Hunter offered him a spot on the staff after Boals’ playing days at Ohio were done because of injury, he took the opportunity and hasn’t looked back.

Once he took that opportunity, it was his dream to one day come back to Athens and be at the helm of one of the most storied programs in the Mid-American Conference. Ohio was his home: it had given him basketball lessons and lessons about life.

Now, after experiences where he was a one-man show to graduate assistant spots to a high profile assistant spot and job rejections, Boals is doing what most people in life unfortunately don’t get to do: live out his dream.

Days after Ohio lost to Northern Illinois in the first round of the MAC Tournament, then-coach Saul Phillips’ contract wasn’t extended, ensuring his exit and the entrance of someone and something new.

Nearly 600 miles away in Long Island, New York, where Boals was the head coach at Stony Brook about to cap off his second season, his phone rang with a familiar area code.

On the other end was Schaus, and it was a conversation that has happened before.

The first-year coach at Ohio has been in the interview process for his current position twice. The first time after John Groce left for Illinois, and the second was after Jim Christian darted for Boston College.

So when the phone rang on a Wednesday afternoon, he answered calmly and cooly.

“I was calm because I knew I had a great job. I knew that we had a great team coming back (at Stony Brook),” Boals said. “It was going to have to take something really good for me to leave there, and once I talked to Jim at length, they wanted to interview me.”

Busy preparing for the Seawolves’ first game in the College Basketball Invitational, and more importantly, his daughter Sydney’s 16th birthday, Boals put off the interview and made it on his time.

“They wanted to interview me on that Friday, but my daughter’s sweet 16 was on Friday, and I know if I had interviewed on that day and I wasn’t there for the party, I’d be divorced,” Boals joked. “So we delayed it to Saturday, and Dr. Nellis and Schaus flew out to Long Island, and we talked for about an hour and 15 minutes.”

That Saturday was March 16. The next day, it was announced that Boals would become the 19th head coach in Ohio history.

After his introductory press conference, Boals met with the players he inherited. They talked about the vision and the direction that would take place moving forward.

Of all the players that Boals immediately made an impression on, it was Ben Vander Plas.

“I remember we came in the locker room, and we sat down and he talked to us for a while,” Vander Plas said. “He talked about how accountability is non-negotiable, the fact that he cares about us going to class and getting our education. He was just talking about a lot of things that kind of line up with how I look at things, and so it was just really good to hear.”

In the days since that meeting in the locker room, the redshirt sophomore’s feelings about his coach have elevated, and it’s clear that all he wants is to play for Boals.

“You can just see it in him every day,” Vander Plas said. “The energy that he brings every day to practice, to every film session, to every team thing we have. He just loves being here.”

That type of commitment has shown from both players and Boals. The ups and downs of the pilot season have been evident in point differentials and the record, but neither side has given up.

The message Boals gave back in March is now a piece of his team’s core identity, and it only will get stronger over time.

Fans, critics, the media and a slew of others awaited the early glimpse of the Bobcats.

They were about to take the court for the first time under Boals in The Convo, and despite the fact that they had an exhibition game the week prior, this was for real.

“You get butterflies thinking you’re going to coach your first (home) game,” he said. “We got a trial run with our exhibition game, but this was real, and one of those days you thought would never happen.

His opening day in The Convo wasn’t soured, as the Bobcats defeated Heidelberg 88-50.

He took in the crowd. He recalled how the Marching 110 gave him chills, and the memories of him and his teammates back in the mid-’90s winning MAC championships flooded his brain.

With his first game under him, the nerves have since settled. It’s been about finding ways to win with a young team. Implementing a new culture within a locker room that only returned a handful of faces from the year prior. Establishing and recreating a program that can withstand the ins and outs, daily nuances of the lives of student-athletes.

He’s handled those things with an outside-the-box approach. Ohio was on a four-game losing streak, the fourth loss on the road at Ball State.

On the bus ride back home, with the atmosphere in blue, Boals announced they were going to Dairy Queen

How the Bobcats have been unable to close out games when they have halftime leads has also been an issue this season. Prior to their game against Buffalo on Feb. 25, Boals ran a halftime simulation where the team went through halftime procedures like it was an actual game.

The Bobcats opened the game on an 18-0 run and never lost the lead in an 11-point victory.

Itching to change out of the green polo and dress slacks for his standard practice outfit — a gray or black “Ohio basketball” crewneck and a pair of shorts — Boals looked around his office as if he couldn’t believe it was truly his.

He stood up and reached for a bottle of water, eyeing the sausage, but opted not to. As he sat back down on the couch, he let out a sigh that only is familiar with a few people.

Those who get to live out their dreams.

“It’s been really cool,” he said. “There’s not too many people who can say that they’re coaching at their alma mater, and I think this is a start. We aren’t where we want to be, but it’s awesome.”