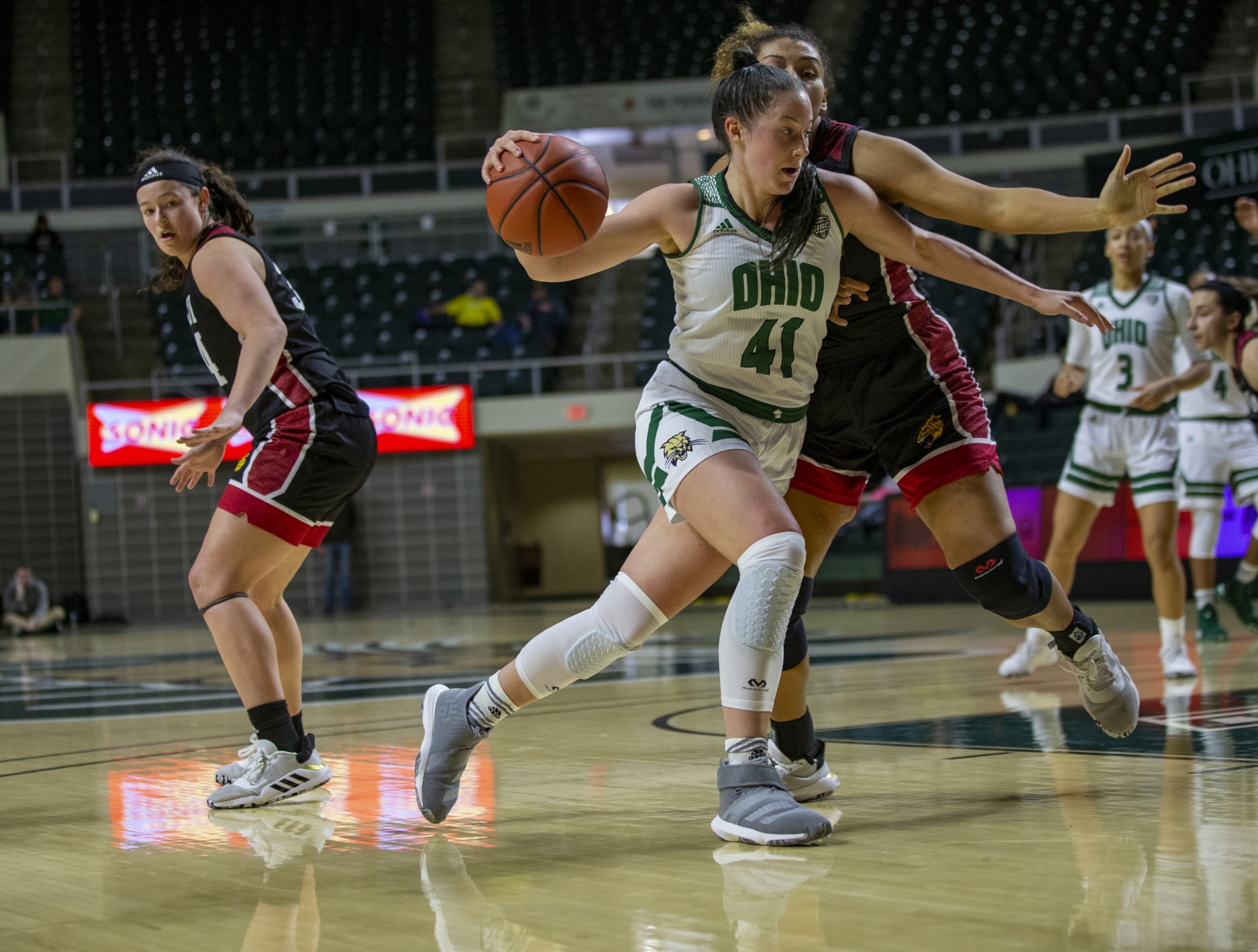 Gabby Burris Does the Dirty Work

Gabby Burris plays with grit so the Bobcats can gleam

G abby Burris walked off the court with her head high but her pride low.

Surrounded by exuberant teammates in the locker room, Burris celebrated with the Bobcats following a 70-57 win Jan. 29 over Akron. It was a good team win. Burris couldn’t deny it, but she also couldn’t suppress her personal disappointment with her final stat line.

She only scored one point and was 0-for-2 from the field. That was very different from the stats she used to put up.

Burris has gotten buckets her entire life. She averaged 22.3 points per game in high school and was the Player of the Year her senior year. So when the highly-touted recruit from Baltimore, Ohio arrived on campus two years ago, it was expected that her scoring ability would follow her.

It did. She just doesn’t get to utilize it.

“My game definitely has changed since coming to OU,” Burris said. “Being around a whole new team and a new family makes your game change.”

Burris shares the court with two of the best guards in the Mid-American Conference and one of the best 3-point shooters in school history. The Bobcats are deep with talent, but there’s only one basketball to go around, and rarely is it headed Burris’ way.

The transition from a star to role player has been tough — and smooth — at times for Burris, a junior. While one-point nights aren’t exactly highlight worthy, Burris’ willingness to rebound, defend and do Ohio’s dirty work has been a bright spot for the Bobcats this season.

“I think everybody wishes they could get more shots, and I don’t fault kids for having that mindset,” coach Bob Boldon said. “I also think there is an understanding that ‘I have to do what’s best for the team.’”

Burris had a team-comes-first mindset from the moment she stepped in The Convo. All she wants to do is win. She was happy when she made the MAC All-Freshman team, but she was also upset when Ohio failed to go deep in the postseason. Heading into Burris’ sophomore season, the expectation was she and point guard Cece Hooks would be Ohio’s duo of sophomore sensations.

But things change. Erica Johnson was a breakout star as a freshman last season. She started off the bench, quickly became a starter and and has since cemented herself as one of the most talented players to ever play for the Bobcats. If Ohio was going to succeed with its best players in their best positions, Burris would have to take another role as a potential third or fourth scoring option.

Now, Burris doesn’t touch the ball as much. The best way she can help is by playing within the system.

The decrease in touches forced her to morph into a different type of player. She plays more off-ball. Catch-and-shoot 3-pointers and tough finishes under a crowded rim have become her game. At times, the process aggravated Burris. Boldon’s been there to help with the adjustment.

“If I feel like I’m not producing enough, he’ll (Boldon) pull me aside and let me know the things I do still matter,” Burris said. “It’s just a little reminder is all you need.”

For Burris, those reminders have been critical. The numbers on her stat sheet don’t show she’s the most disciplined player on the team. On defense, she commands her gaps and knows all her assignments.

“She’s somebody that her teammates can count on to be in the right spot,” Boldon said “It’s very refreshing to know that spot will be covered correctly.”

On offense, Burris is the team’s second-best rebounder with 5.9 rebounds per game and provides space for Hooks and Johnson to pull off their highlight worthy feats. Her placement is just as valuable in Ohio’s sets.

It’s thankless work. Even though Hooks and Johnson have been on a tear this season, teams still guard Burris tightly because they know about her potential. Oftentimes, games feel like a track practice. Moving a defender out of the paint isn’t fun for someone who used to score at will.

That’s why on some nights, Burris gets to take a night off from her role and let loose.

In a game against Eastern Michigan on Feb. 5, Burris exploded for 19 points and six rebounds in a 75-65 win. It was a performance similar to her days when she first arrived with the Bobcats.

But the days of Burris needing to score 20 points every game are gone. Her role as a defender, passer and rebounder is what Ohio needs.

If Burris needs to step up and go back to her old ways, though, she’ll be happy to.