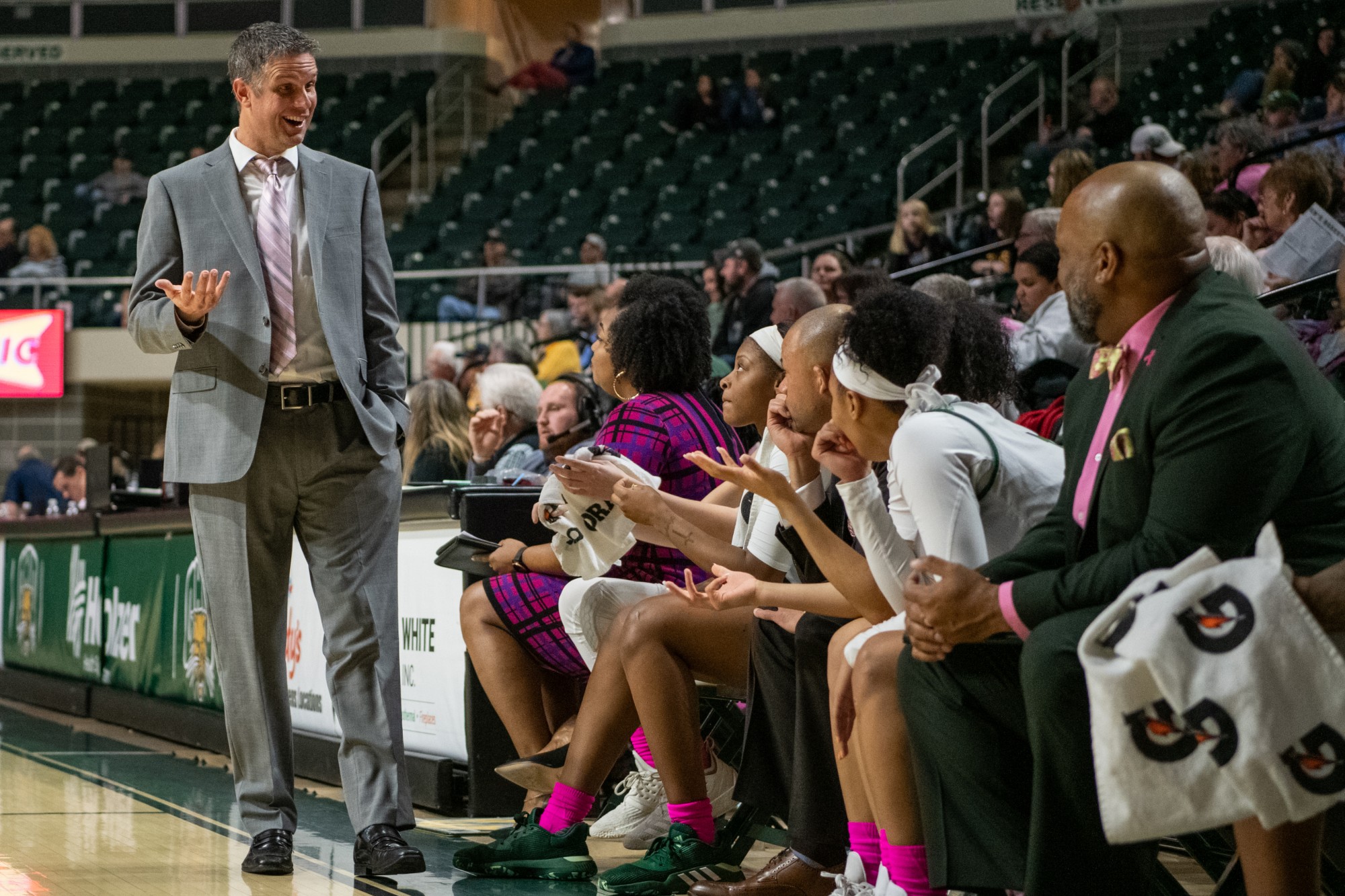 Ohio University coach Bob Boldon speaks to players during the Ohio versus Toledo game in The Convocation Center on Wednesday, Feb. 19, 2020. Ohio won the match 86-58. (FILE)

T he Bobcats have one of the highest-paced offenses in the Mid-American Conference. When they can score fast, they take over games.

Toledo saw that happen when Ohio rattled off a 14-0 run in what was a close game in just three minutes. Cece Hooks and •Erica Johnson led the team up and down the floor, knocking down almost every shot.

Coach Bob Boldon thinks the Bobcats were missing some of that speed in the second half of the 79-76 loss at Akron.

“I wish we would play a little faster,” Boldon said. “It’s hard to complain about that when we’re 32nd in the country for scoring. It seems like a silly thing. Maybe I should pick something else to complain about, but we’ve been better when we play fast. We never look bad playing fast.”

It’s hard to play fast at this point of the season. In late February, teams are worn down from playing for the last four months. The Bobcats have been practicing and playing games regularly and have fallen into a routine.

That’s why on Monday, Ohio’s practice was filled with games of 3-on-3. Hooks, Johnson and Amani Burke, the Bobcats’ top three scorers, were all on different teams for the competition.

Not only did this competitive play spike the players’ attention — it also forced them to play fast. With a 12-second shot clock, the players had to play faster on both sides of the ball. Boldon was also looking for quick transitions between offense and defense, something he thought needs improving heading into the final stretch of the season.

“They started to develop some strategies to work with a quick clock, get both good offensive shots and get matched up on defense,” Boldon said. “I didn’t think we did a really good job of that Saturday.”

Ohio (17-9, 10-5 MAC) might need to use some of that quick clock management in the upcoming MAC Tournament. All four of the Bobcats’ conference losses have come by one possession. Their average margin of loss in the MAC is two points.

The team will look to Hooks and Johnson as they have all season to up the tempo on the floor.

The problem with that for Boldon, however, is that he is already asking for so much from his two guards.

“It’s also more taxing on your point guards to play fast,” Boldon said. “There is a limited amount of things I can ask Cierra and Erica to do. So, it’s kind of a fine line of I wish we could play a little faster, I think if we’d play faster, we’d have more success. But the offensive side of things is fine. It’s just defense we’ve got to pick up a little bit.”

Luckily for the Bobcats, they have the fastest player in the conference — who also happens to be the best defender in the MAC — in Hooks. The star point guard has averaged a career-high 3.8 steals per game, which is fourth in the nation, and leads Ohio with 18.4 points per game.

The defense will be tested in the final two weeks of the season, with three of the MAC’s top six offenses on Ohio’s schedule. Hooks will be key, but she can’t do it all.

The Bobcats failed their first test by falling to Bowling Green on Wednesday and gave up 82 points to the No. 10 offense in the conference. That performance may serve as a wake-up call for Boldon’s players, who dropped back-to-back MAC games for the first time since 2018.

Ohio still has three games left against Buffalo, Kent State and Miami. The Bobcats defeated each of those teams in their previous East Division meeting this season, but they can’t afford to slip any further if they want to win their division for the second consecutive season.