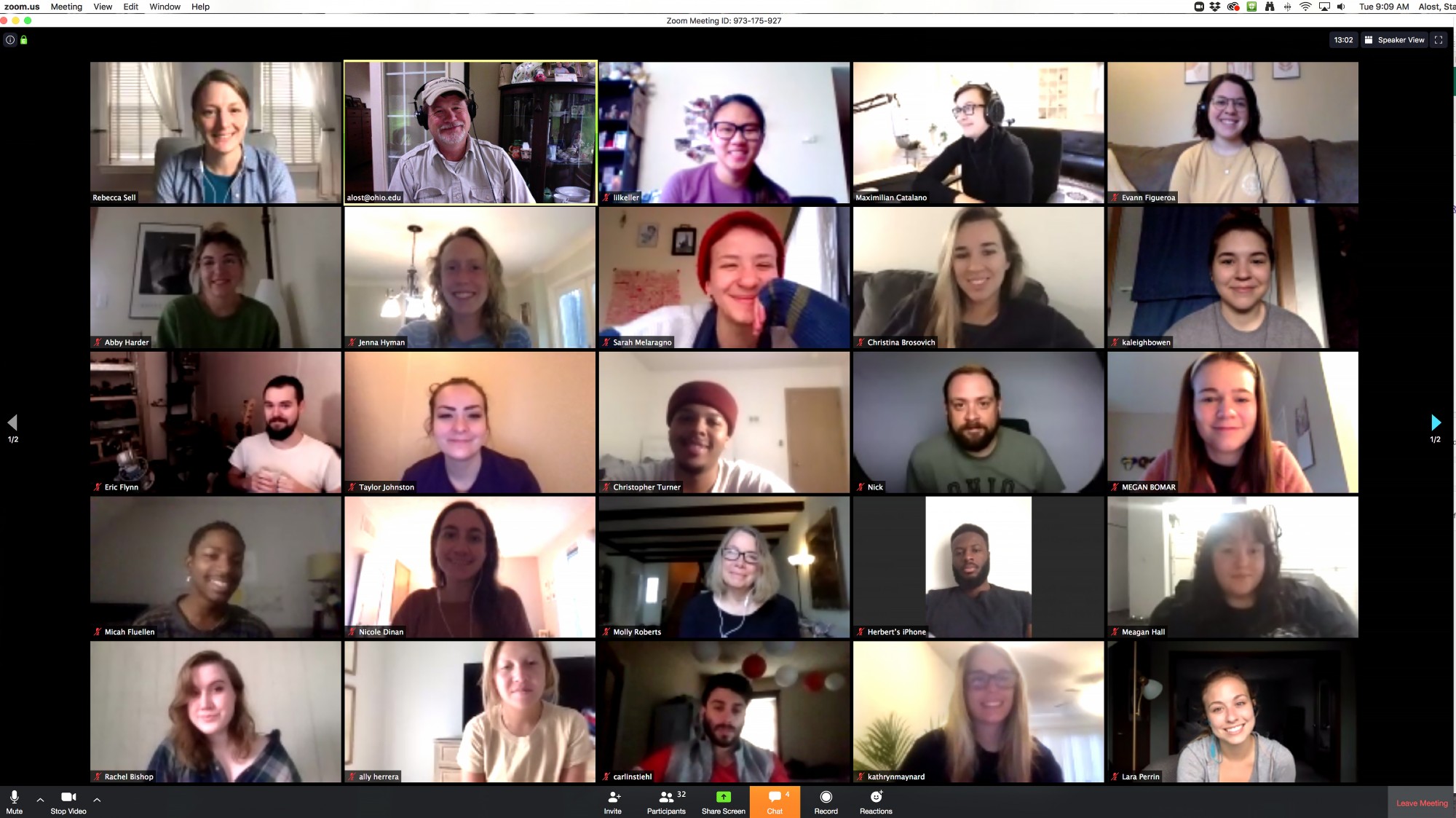 Soul of Athens students pose for a "virtual" group photo during their 9 a.m. class meeting on Zoom. Taylor Johnston and Meagan Hall work for The Post.

Putting Their Souls Into It

W hen Stan Alost and Rebecca Sell handed out the topic assignments for the Soul of Athens project this year, they never expected the challenges they’d face or the overwhelming connection the students would create.

For 13 years, Ohio University’s visual communication program has provided an opportunity for undergraduate and graduate students to work together on a project where teams of students explore different areas of Athens culture that make up the place students and residents know and love.

“It’s an opportunity for students –– not just VisCom students –– and what we try to do is take what students have been learning and give them the chance in a publication environment to do it,” Alost, one of the instructors for Soul of Athens, said, “to figure out all the ins and outs of how do you start up this project from scratch, how do you figure out what kind of content to give to the audiences and then how you’re going to deliver it.”

For all of the students involved, Soul of Athens has been an incredible learning and life-changing experience. But it didn’t just appear over night. Building and maintaining the project takes hard work, dedication and a lot of soul.

Though the project is born out of two courses, it’s a student-run production. The project is guided by Alost and Sell, two professors who help to determine the project topics and assist with questions but mainly gear the lesson toward letting students figure out how to collaborate among themselves.

“While I am technically an instructor of record for the class, we really hand over the reins to the students, and they take it and go,”-Stan Alost, instructor for Soul of Athens

The projects begin when the students are grouped together by the instructors based on their skill sets. The goal of splitting up the students into groups is to even out the playing field so there’s at least one designer, one person who knows how to code and one content provider. Once the groups are arranged as evenly skilled as possible, they’re ready to choose the topics provided by the instructors.

Evann Figueroa, a graduate student, is a part of the religions group. The group’s plan was to find people within the community who are involved in different religious faith or spiritual groups and highlight why their religions are important to them and to Athens as a whole. The point is to showcase Athens as a microcosm of religion compared to the surrounding area and how it’s easy to be accepted within the Athens bubble.

“That’s a part of what makes Athens unique,” Figueroa said. “You can come here, no matter what you’re practicing, and be accepted and able to find people similar to you.”

The group is now working on expanding the three interviews they obtained before spring break to make an interactive story that highlights each individual faith group of their sources.

Lara Perrin, a senior studying visual communication interactive design, is in the veterans group and has weathered the challenge of taking such a broad topic and narrowing it down for a more effective project.

Her group’s story will focus on 9/11 and post-9/11 era veterans because they felt those veterans can be underrepresented.

“You think of older people, I think, when you think of vets, so we wanted to focus on the experience of that younger generation and then tying in the resources or lack thereof for veterans in Appalachia,” Perrin said.

A lot of their research came from seeking out what Athens provides as resources for veterans, and they found two gentlemen who had served recently and did an individualized story about them in the context of their larger research.

Some students have had such a positive experience with Soul of Athens that they’ve taken it multiple times. Nick Bolin, a graduate student, is on his fourth round of taking Soul of Athens. He took the course during his undergraduate degree and is taking it again now in his second year of graduate school.

“Everyone thinks I’m crazy, but it’s a class that every time you take it it’s different ... there’s different people and different stories, and it challenges you to think in different ways of using different storytelling methods.”-Nick Bolin, graduate student

The semester-long project seemed to be going along swimmingly. Everyone had a handle on their topics and sources, and both Alost and Sell were proud of how everything was progressing.

That is, until they were hit with the challenges of the coronavirus pandemic.

Once the coronavirus shut down in person classes at OU, Alost and Sell had to scramble to figure out an alternative.

“It happened right at a point where they really hit their stride as a collaboration. They really understood where they were heading. They had their plans together ... So all of the sudden having to go online and not in person with that has been a big adjustment,” Sell said.

The students were already about 10 weeks into their projects, so no one wanted to stop there. They quickly transitioned into online classes, with meetings through virtual services, like Zoom and Microsoft Teams, and working on the projects through Adobe Creative Cloud.

Though some students like Figueroa had sources fall through last minute due to the chaos of the pandemic, most of the groups have been able to take the research and interviews they already had before they left for spring break and expand on them to finish their projects.

“All those things that they had figured out: how to work together, how to collaborate, how to communicate, the types of projects and stories they want to tell, those have maintained,” Sell said. “I’ve been so impressed with how they’ve held on to that.”

Though the pandemic proves to be a challenge with communication, some groups are working to incorporate the pandemic into their projects as a way to make the best of a bad situation. All of the students are working hard to stay communicative and collaborative with their peers, an aspect that Alost and Sell greatly admire.

For undergraduate seniors like Perrin and Nicole Dinan, it’s been a heartbreaking experience to have to finish the remainder of the project and college in general virtually. However, with all of the progress made on their projects, they know it’s important that they put their disappointment aside to finish what they started.

“It’s super disappointing to have the last part of the semester change so drastically,” Dinan said in an email. “We already put a ton of time and effort into creating these projects, and we all want to see our hard work be rewarded.”

Putting their souls into it

Alost, Sell, Bolin and Figueroa agree with Perrin and Dinan that though the semester’s end is not as they had anticipated, the tradition of Soul of Athens deserves to be executed as if nothing stood in their way.

“I think it’s a matter of creative problem solving,” Figueroa said. “I don’t think anybody ever thought, ‘This is it. We’re not going to finish this semester.’ I think because of our specific field, there’s so many options that there was no way we could have ever been halted completely.”

Not only do the professors and students feel it’s important to continue with the projects, but they also have appreciated having that connection with each other during this chaotic time.

“It’s really helpful to see people’s reactions and hear their voices,” Perrin said. “I don’t think I really understood how important that was until this situation happened, and now it’s like, ‘Oh, my God. I can’t wait to be back in person with these people.’”

All of the past projects for Soul of Athens can be found on its website, and all of the 2020 projects will launch on the website on April 21.