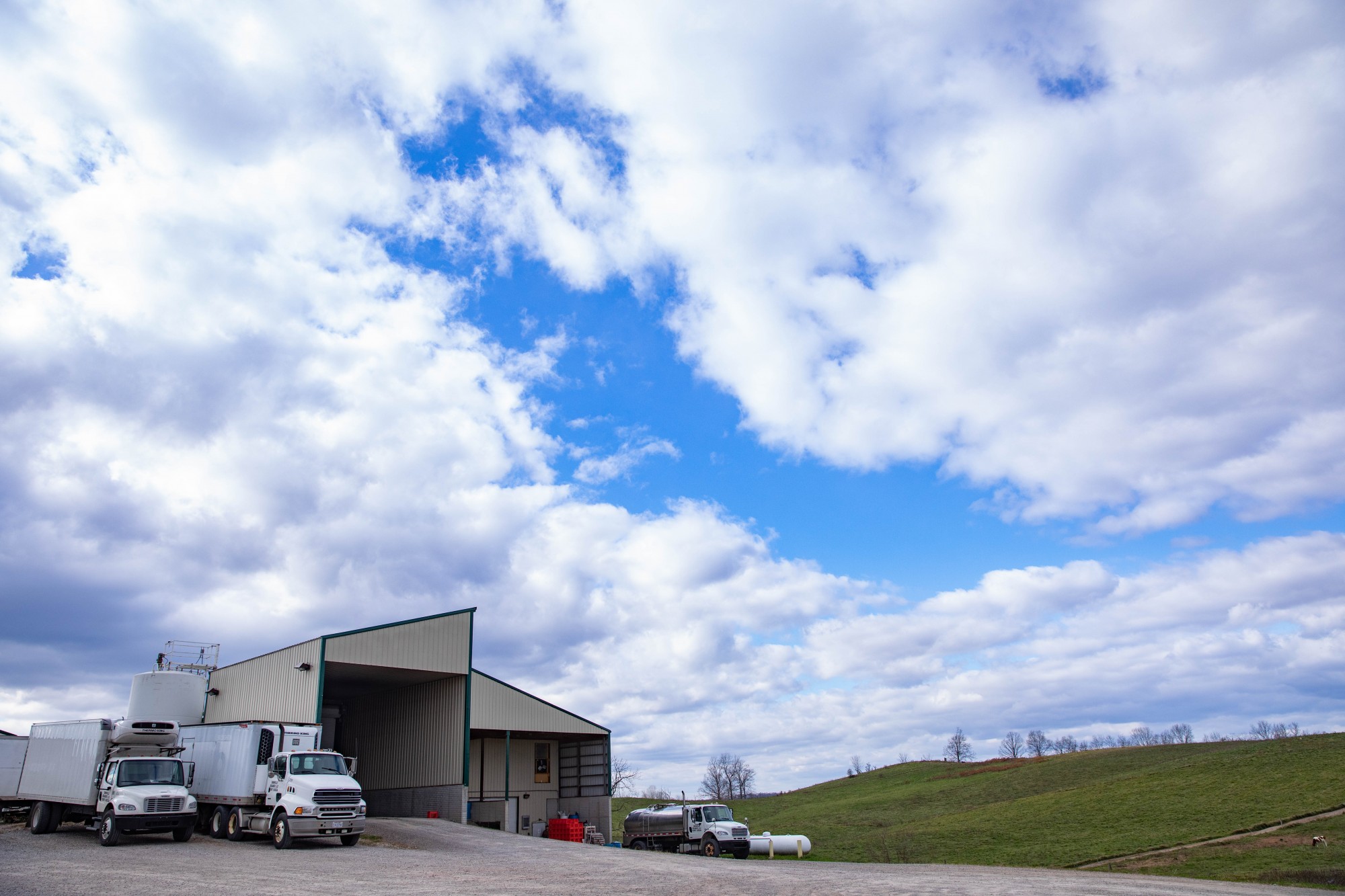 Snowville Creamery, the organic dairy supplier in Pomeroy, Ohio, is nestled between its hills dividing the main plant from the farmland.

From Farm to Fridge

Today, Kozak rarely milks them himself, instead working on overseeing his 12 employees who aid in milking his 420 cows. He and his wife, Sharon, rent the 600-acre farm called Clover Patch Dairy in Millersburg.

Kozak said in order to meet the demand for milk and make a living, more cows are needed to compete with farms that have been consolidated by large milk suppliers.

“We’re a little bit in no-man’s land for us,” Kozak said. “We’re too big to do a lot of the work ourselves and in some ways too small to be really efficient. That’s all livestock. It’s been that way from pigs to pork to poultry to beef.”

In order to make his living, Kozak has worked with Snowville Creamery for about four years. Right now, he’s its only supplier for milk. Snowville Creamery, a milk processing company based in Pomeroy, produces milk, cheese, yogurt and cream.

About one-fourth of Kozak’s milk goes to Snowville twice a week; the rest is sold to Alpine Cheese Company in Winesburg. 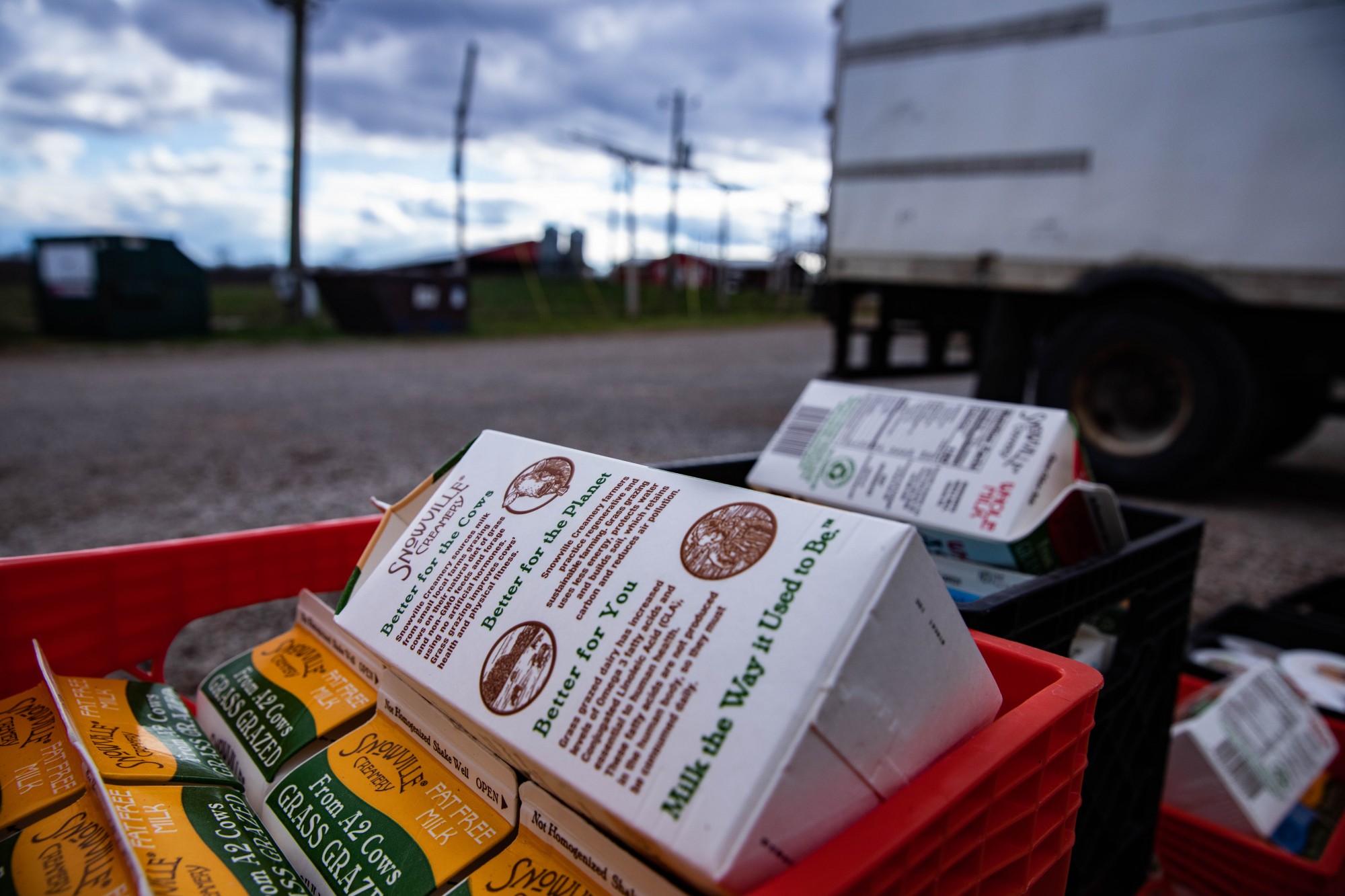 Crates of milk prepared and packaged at Snowville Creamery rest in rows outside its plant, ready for shipment on Monday, Nov. 16, 2020.

Snowville Creamery was founded in 2013 by husband and wife duo Victoria and Warren Taylor.

“It’s important to us to leave the Earth better than we found it,” Victoria said. “In farming, like most things in this world, you can either contribute to the betterment of something or to its demise. We choose to support farmers that take care to manage their lands in a way that builds soil health, reduces runoff and sequesters carbon from the atmosphere.”

Kozak, who grew up near Pittsburgh, has been farming since he was 9. Now 58 years old, he’s been around the block a couple times when it comes to raising dairy cows.

Kozak went to Pennsylvania State University for dairy and then worked for Pennsylvania Guernsey Breeders’ Association and the American Jersey Association. Both associations focus on aiding dairy farmers. After moving away from home and meeting his wife in Oregon, he decided to move to Pennsylvania to start his own farm.

After one year in Pennsylvania, he moved to Wayne County in Ohio, which was the No. 1 dairy county in Ohio at the time. He later moved to his current farm in Millersburg and has been there for 24 years.

“When I graduated from Penn State, there were about a quarter million dairy farms in the US,” Kozak said. “And today there are about 35,000 dairy farms.”

Farming has drastically changed over the years. Kozak said there has been a problem with larger farms shrinking the dairy industry for some time now. About 50% of the milk in the nation is produced on 3% of farms.

“A very small percentage of cattle don’t even get off concrete their whole life,” Kozak said. “A farm that farms like we do can only get so efficient.”

Approximately 97% of farms in the U.S. are family owned, but large family farms (those with $350,000 or more in annual revenue) contribute to 60% of agriculture production, according to a 2014 report from the United States Department of Agriculture.

It’s hard for farmers to make a living when they are outcompeted by farms with triple the cows, Kozak said, which often comes down to the ethical question for farmers: do they allow their cows to roam free in a pasture or make more money and have more cows and smaller space?

When a cow walks through a pasture, they burn more energy. This often means a farm might be less efficient, but more humane, if cows are allowed to graze in fields.

“I call my wife the ‘Mother Teresa of feeding calves.’ She goes to feed them: ‘How are you doing today girl? How you doing? You ready to drink?’ Even I talk to the cows,” Kozak said. 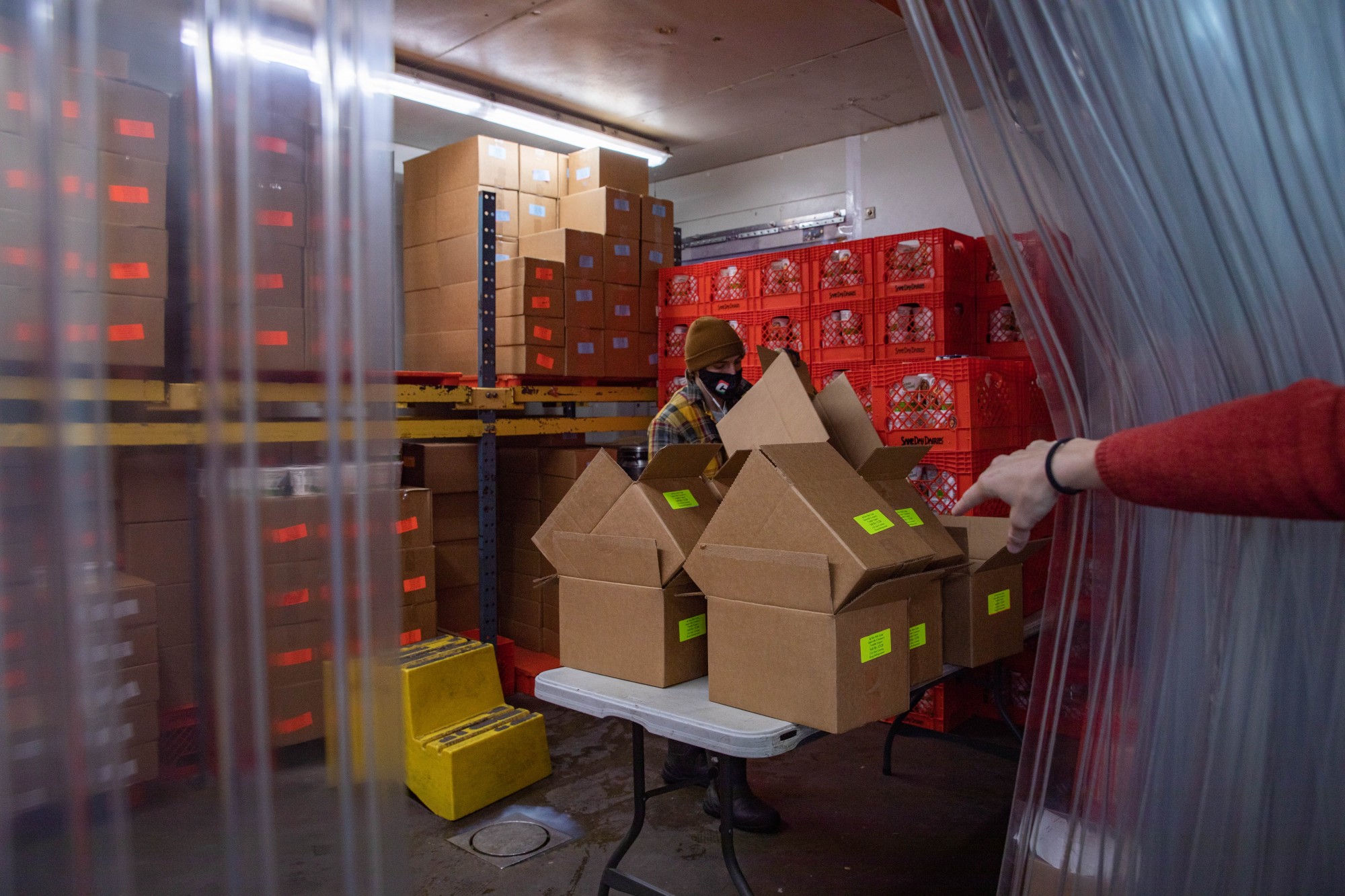 Marketing and Sales Director for Snowville Creamery Heather Fuston draws the plastic dividers to reveal Cass Simpkons on duty with packing its products on the afternoon of Monday, Nov. 16, 2020.

The difference between cheap milk and more expensive milk, Kozak said, is likely because of farm treatment and sustainability. Smaller farms often have higher prices per gallon than larger ones.

A U.S. Senate bill is currently in the air to fight agricultural operations that stem from mass production. The Farm Systems Reform Act, sponsored by Sen. Cory Booker (D-N.J.), is aimed toward eliminating concentrated animal feeding operations, or CAFO, over the next 20 years. According to the bill, CAFOs are animal feeding operations that include a minimum of 700 dairy cows, 1,000 beef cattle, 2,500 pigs weighing more than 55 pounds, 10,000 pigs weighing fewer than 55 pounds, 500 horses, 10,000 sheep or lambs and/or 55,000 turkeys.

American taxpayers currently pay about $22 billion per year to fund agricultural subsidies, with most of the funds going toward corn and soybeans farmers. The bill’s goal is to provide farmers with the tools to become more profitable without the help from the American taxpayer.

About half of Kozak’s farm is pasture, and he will allow his heifers, or cows that have not given birth yet, to graze on the fields. During the fall, they will graze on the corn stalks.

“Every two or three weeks, they will go back around and graze it and let it regrow,” Kozak said.

One-hundred acres of his farm make up hay, and about 150 acres are cornfields. During the winter, he said he will plant a cover crop, which is usually rye grass.

“It’ll pretty much be alive all winter, whether it’s growing or not depends on the temperature,” Kozak said. “But it helps hold the soil and the nutrients in place. It gives the organisms in the soil something to interact with. Healthy soil is a symbiotic relationship between the organism in the soil and the plants that are grown there.”

Heather Fuston, the sales and marketing director for Snowville, said farms that sell milk to Snowville must also be sustainable. In rotational agriculture, the animals manage the land by eating one patch, then move onto another. This cycle continues and mimics the natural herd movements that cows would take. When the cows defecate, it will go back into the soil and help grow more grass. The cows are not kept in one area for long or forced to be gathered in small areas, unlike conventional farming, where cows are often kept in barns for their entire lifespan.

“Our farmers really consider themselves to be grass farmers first,” Fuston said. “So they work really hard to make sure that soil health is being built up.” 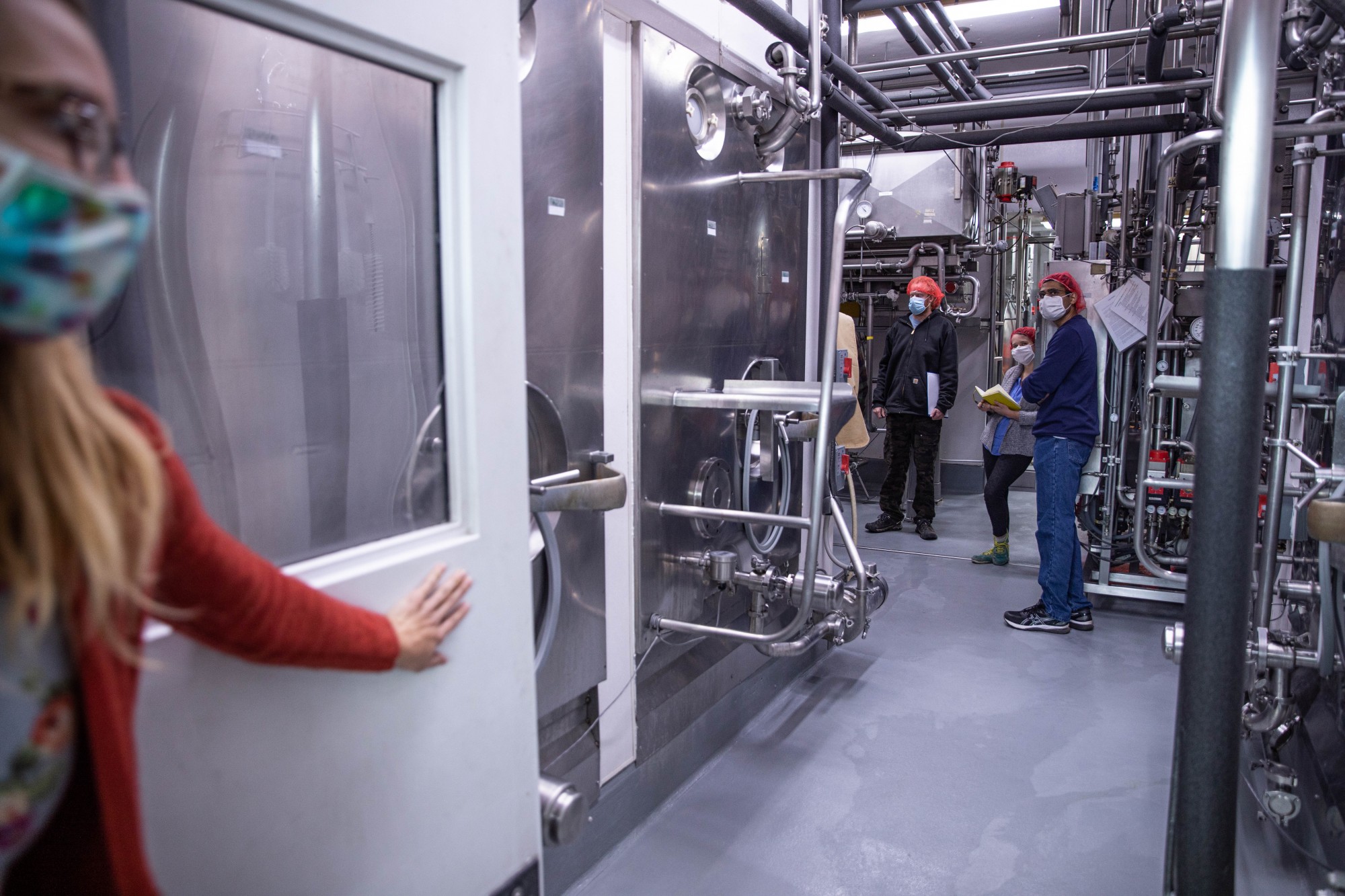 A team meeting is held inside a processing room inside the Snowville Creamery plant in Pomeroy, Ohio, on Monday, Nov. 16, 2020.

Rotational grazing also benefits the soil because there are no pesticides used, and the cows naturally fertilize the soil. When the soil becomes enriched with manure and is provided with minerals, the soil releases carbon, which plants use for photosynthesis. The food system, including feed, fertilizer, pesticides, processing and waste disposal, accounts for 30% or more of total annual global greenhouse gas emissions, according to the Rodale Institute, a research institute on organic agriculture. Healthier soil helps to counteract these gases.

“People are starting to realize that our old ways of stripping nutrients from the soil, and polluting our land to produce food is backwards and counterproductive,” Victoria said.

“Rotationally grazed pasture is the gold standard in my opinion,” Kozak said. “Soil loss in the U.S. averages seven ton per acre. This is not sustainable.”

Not all of Kozak’s cows are normal cows. Some cows produce a specific protein called the A2 protein, and this is the milk he sells to Snowville. This A2 protein is found in human, goat and sheep milk and is a mutation of the milk protein beta casein. While lactose intolerance varies in people, regular cow milk is made of both A1 and A2 proteins. Cows with the A2 mutation only produce A2 proteins.

Kozak has both A1 and A2 cows and is shifting the herd slowly to A2, he said. His milk isn’t organic, but it is non-GMO verified. 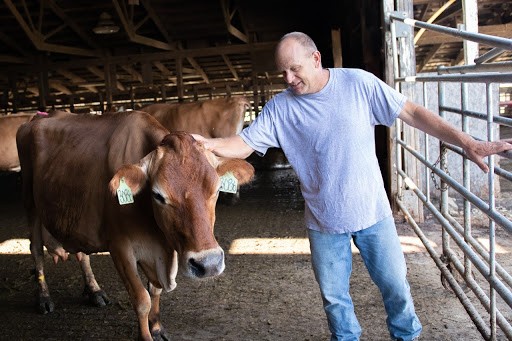 Fuston said all of the milk purchased from farmers must be certified A2-only. Cows with the A2 genes are specifically bred with one another to ensure the animals have this gene. Snowville sells its products at supermarkets and online, along with institutions and groups. Ohio University is one of those customers.

Erin Robb, the procurement and contract manager for culinary at OU, said the university purchases half gallons of milk, yogurt and cheese products to sell in the three markets. It also purchases the milk to use in drinks at all five of the campus cafes. For the first half of the year 2019, OU purchased about $234,000 worth of “neighborhood food,” which is food that is raised or produced within 250 miles of campus.

“We know that many of our students prioritize the purchase of local food, so we strive to provide local food options in our retail venues,” said Robb. “We also incorporate local food into our residential dining program when it’s economically feasible to do so.”

At the end of the day, Snowville Creamery aims to buy from farms that support sustainable farming and create milk that is both healthy and good, Fuston said.

“We really feel that milk is such a perfect food, and (nature has) evolved it to the perfect thing,” Fuston said.

But sustainable farming often takes time. Kozak said he never started out intending his farm to be sustainable or regenerative, but over time, that is what made the most sense.

“It just became apparent over time, especially on the land that we farm, that having a growing crop or at least a substantial dormant crop holding the soil in place was the right thing to do.”