How small businesses work to stay open during COVID-19

B usinesses come and go in Athens as much as Ohio University students do, but some restaurants find a way to stick it out and serve the community for years and even decades.

Owning a restaurant in Athens, especially on Court Street, appears as though it’s a safe business venture, as it’s a footpath along the main drag for OU students. That was not the case, however, for some restaurants like Franco’s Pizza Place and LOTSA Stone Fired Pizza, formerly located on 42 S. Court St. and 14 S. Court St., respectively. LOTSA Pizza closed in late June 2019, and Franco’s closed in early July 2019.

On the road less traveled for most students, there are a handful of restaurants well-loved by the rest of Athens. Larry’s Dawg House, Miller’s Chicken and Tavolino all sit further from walking distance for most Ohio University students yet remain popular.

A common thread for each restaurant's success exists: each restaurant has a low employee turnover rate, quality service, loyal customers and parking.

Some of the successful restaurants in Athens recognize the importance of treating their employees well. Emily Christine, owner and a chef at Tavolino, believes in paying employees what they deserve.

“A lot of the same people have worked here for a really long time, so I think that draws customers in,” Phillips said. “I think people really enjoy having the same people wait on them and know them and have a relationship with the customers that come in here.”

During a pandemic, though, it’s even harder for restaurants to conduct business as usual. COVID-19 has shut down restaurants and bars, resulting in carry-out only, per the orders of Ohio Gov. Mike DeWine. Businesses have had to completely change the way they serve their small number of customers.

At Bagel Street Deli, 27 S. Court St., the dining room is now closed, and everything is served through the front window. A chip reader is 8 feet away from the register for customers to pay. Customers may not pay in cash, and employees are having their temperature taken by Linnevers before each shift.

“We’re open mainly to give our employees a paycheck,” Lori Linnevers, the Deli’s general manager, said. “Yeah, we’re not making a whole lot of money right now, if we’re making any.”

Linnevers said she is confident in safety within Bagel Street Deli because everyone there is following proper sanitary procedures.

“There are days when you’re a little uneasy about it (the virus),” Linnevers said. “We’re doing above and beyond everything what we possibly can to stay safe in here and to keep all the employees safe when it comes to wiping everything down all the time, constant hand sanitizing, staying 6 feet apart (or more).”

Court Street Coffee, located at both 67 S. Court St. and 2131 E. State St., has also been forced to restructure its entire business model. Currently, Court Street Coffee has adjusted its hours and has cut its employees to one person per location. Debby Fulks, the owner, said because of the large counters that offer a lot of space, drinks can be made, served and picked up either inside or curbside. Fulks said she makes sure to wash and sanitize her hands before making each drink.

Tavolino, 9 N. Shafer St., also drastically changed its business model. Tray and carry-out orders are being accepted for anyone looking to continue to support the business. 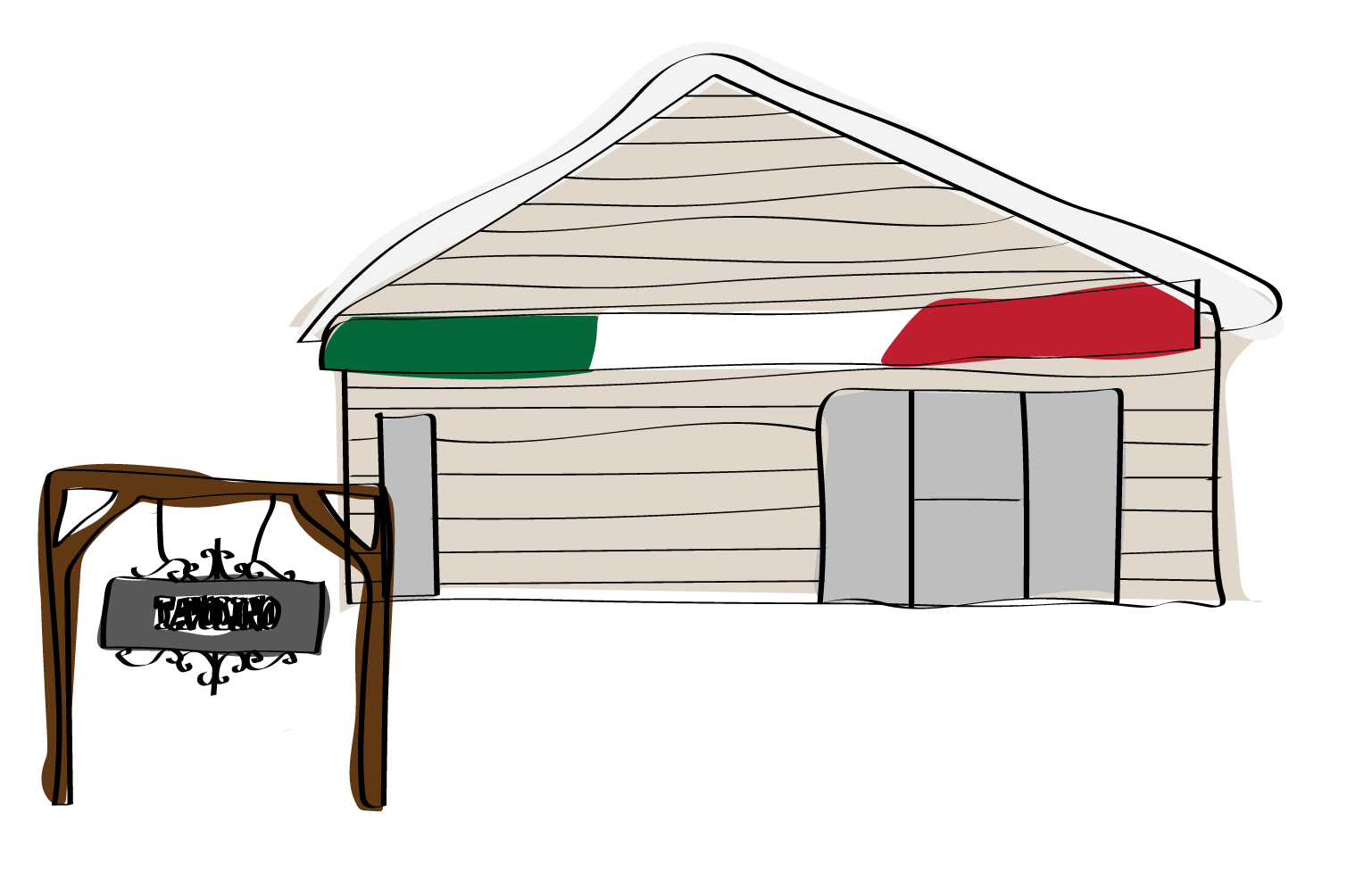 “I’m doing OK. I’m not doing fantastic, but I’m doing OK, and I’m feeling good about it if I can maintain this,” Christine said. “It’s been amazing to see everybody coming out to support.”

Financially, many restaurants are just trying to break even. Restaurants in Athens are selling gift certificates and gift cards, but Christine said she is wary of the effects of spending those purchases all at once when restaurants can serve people again.

“That is so kind and wonderful of the customer base. However, when all of this is over and all the restrictions are lifted, I’m afraid businesses are going to be left with all the gift certificates. So, in a sense, we won’t be making any money at that point,” Christine said. “I hope that people are very careful of utilizing the gift certificates afterwards and try to do it slowly to give them a chance to recover because that alone would be a very big thing to deal with.”

Christine said she hates there are businesses failing and that there’s only so much that can be done about it right now.

“I don’t want to see my friend’s businesses go down because of all of this, and I understand why we’re doing it, and I appreciate why we’re doing it, but I can’t sit here and do nothing while they go down,” Christine said. “I can’t let that happen.”

For every restaurant, though, community support is incredibly important. Restaurant owners and operators understand that it is hard for people to support businesses in a time when it’s financially difficult to support restaurants and when people are being told to stay home.

Linnevers said it does make her a little nervous to see so many people lined up outside the Bagel Street Deli window.

“Typically, when I feel the most uneasy about it is on Monday when I haven’t been here for two days. I live out in the country, and I don’t have to see people ever if I don’t want to,” Linnevers said. “So, on Mondays, I get a little uptight when I see a whole bunch of people outside the window because you kind of feel like ‘you guys aren’t supposed to be out.’”

Keeping customers will be important for when the pandemic is over. Anyone who spends money to dine out at a restaurant expects a certain quality of service pertaining to wait time, friendliness of employees and staff and, most obviously, food quality. At Larry’s Dawg House, 410 W. Union St., General Manager Dillan King said he makes sure the customers have a great experience and are taken care of. He’s worked there for 16 years.

Orders are ready four minutes after being placed and everything is made fresh, King said.

“We try to take that extra few seconds to minutes, even, to talk to people (and) get to know them,” King said.

Christine also believes that quality service, among other factors, is important in running a restaurant.

“I think that the biggest part, to me, is quality of service, quality of product and, honestly, interaction,” Christine said. “If you are standing there saying ‘this is an extension of me,’ then people see that you care and that you want the best for them, for your employees, for everyone and that you’re trying hard.”

Another component of keeping regulars is serving both Athens residents and students equally. Linnevers said she believes the residents are just as important as the student population of customers.

“We’ve always put the townspeople first because they’re your business all year round,” Linnevers said. “When you close down when the students are gone, it kinda just tells you that the townspeople don’t matter and that definitely doesn’t sit well with a lot of the townspeople.”

Parking is another element that affects business that is often overlooked. It is nearly impossible to find parking in Uptown Athens, especially during the school year. That’s why Christine is glad to be able to provide parking to her customers.

“The limited parking that is available is having to be used by people that are going to work or that are picking up whatever or delivering,” Christine said.

Larry’s Dawg House, Miller’s Chicken and Tavolino all have accessible parking for customers wanting to eat at any of those businesses.

Some Court Street restaurants face some other issues, though, that are difficult to address. King thinks having so many restaurants on Court Street can be overwhelming because it can be hard to choose where to eat with so many options.

“I think that there’s way too many restaurants on Court Street,” King said. “I think when you give people that much selection, it almost deters them.”

Christine agrees, saying that having too many similar restaurants in one spot can make it hard to succeed.

“If you have 10 businesses within two blocks of each other, you’re competing with all the ones that are similar to you,” Christine said.

Faulks said she disagrees that there is competition. When it comes to cafes in Athens, she said she does not see her business as a competition.

“I’m not in a competition,” Faulks said. “It’s just everybody is unique with what they offer.”

At the end of the day, uniqueness is important to what keeps a business continuously opening their doors.