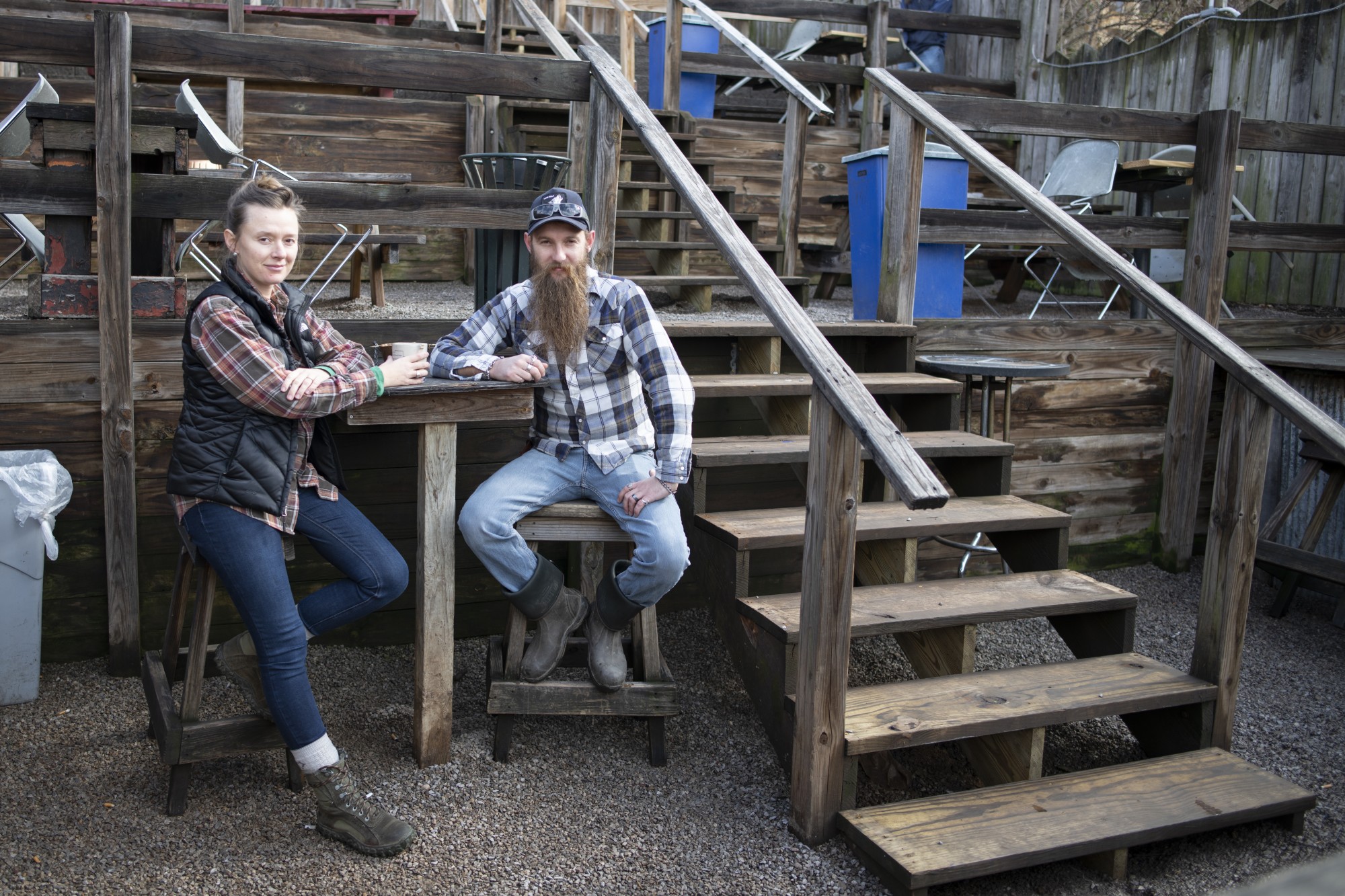 Sibilings Adrienne Whitney (left) and Locke Wolf (right), pose for a portrait on the back deck of The Skull in Athens, Ohio on March 3, 2020.

The culture of the Smiling Skull Saloon

D espite it being 9:30 a.m., Locke Wolf leaned across the counter of the Smiling Skull Saloon, watching outside. The saloon isn’t open yet, but there are people outside smoking cigarettes and waiting for the doors to open.

“They’re ready for us to open,” Wolf said. “It’s like that every day.”

He’s drinking black coffee this morning as he does every day. His dark red beard is long enough to nearly touch the bottom of his stomach, and part of it is covered by the black flat cap on his head.

While not being directly on Court Street with the plethora of other bars in Athens, the Smiling Skull Saloon, or “The Skull,” remains a long time staple of the town. Inside, the bar hasn’t changed much from when it opened 27 years ago. It’s decorated with many skulls and neon signs. A 1990s Pac-Man Arcade Machine sits in the corner. Patrons who choose to sit at the bar sit on upright barrels. 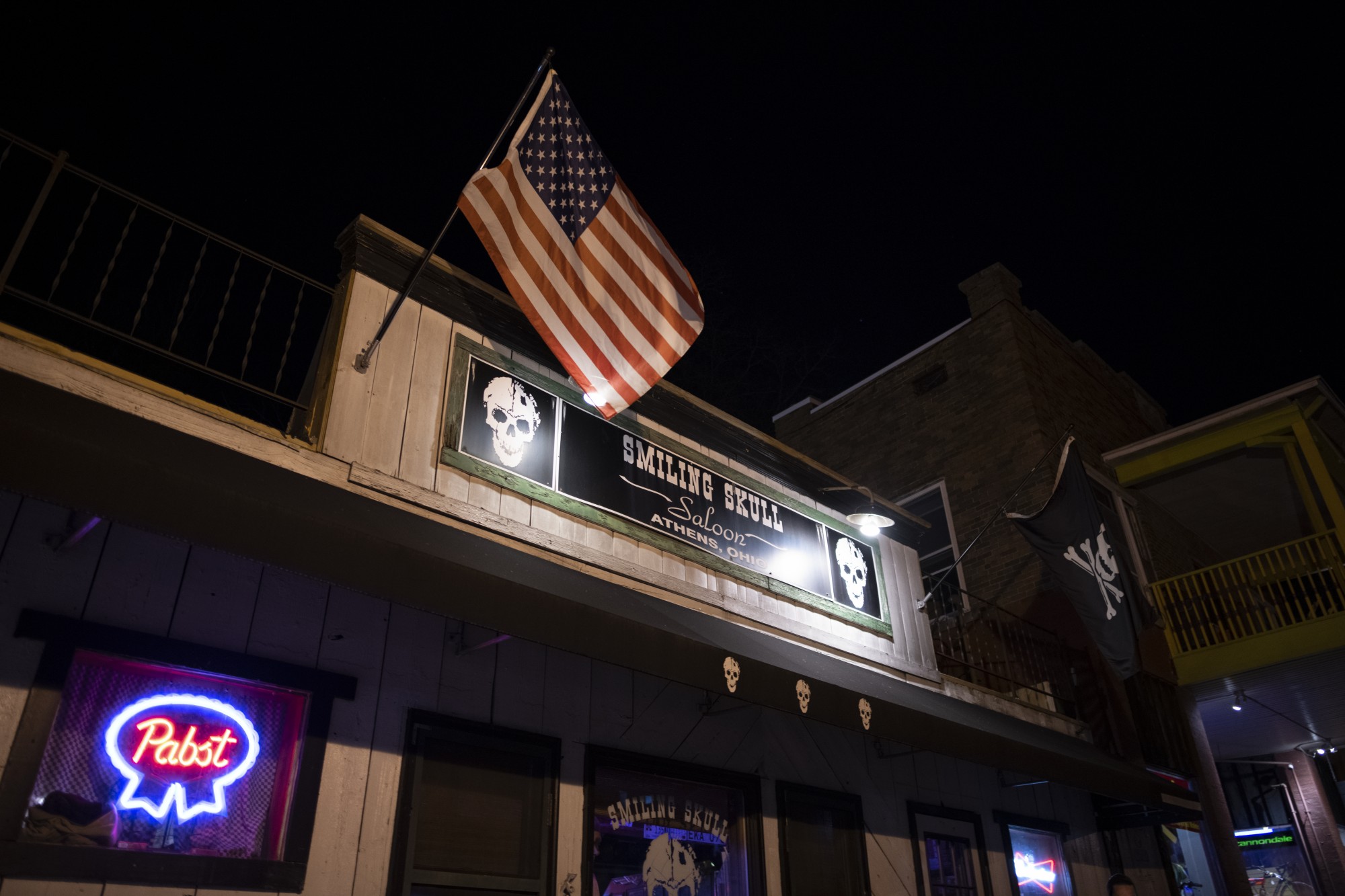 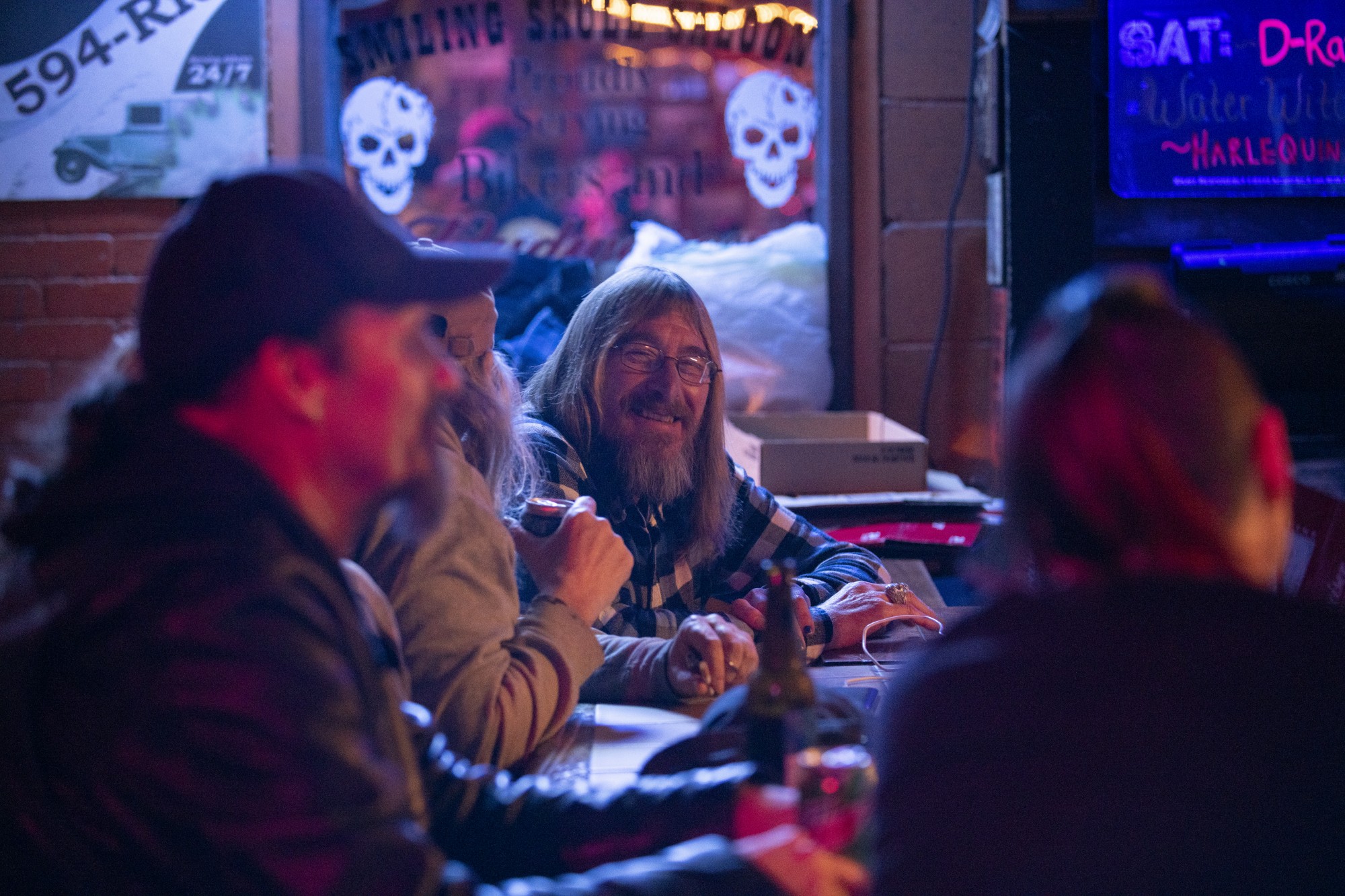 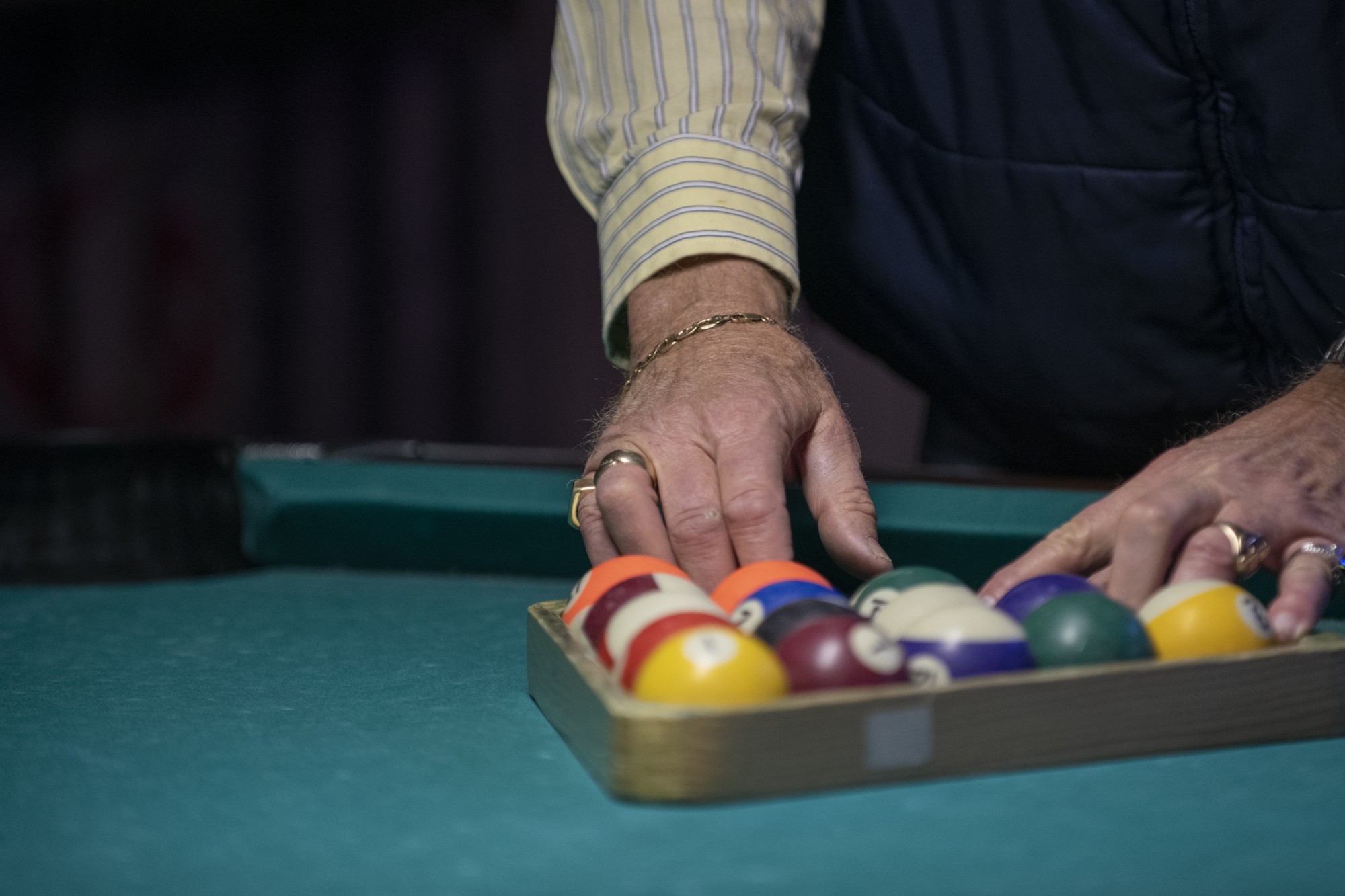 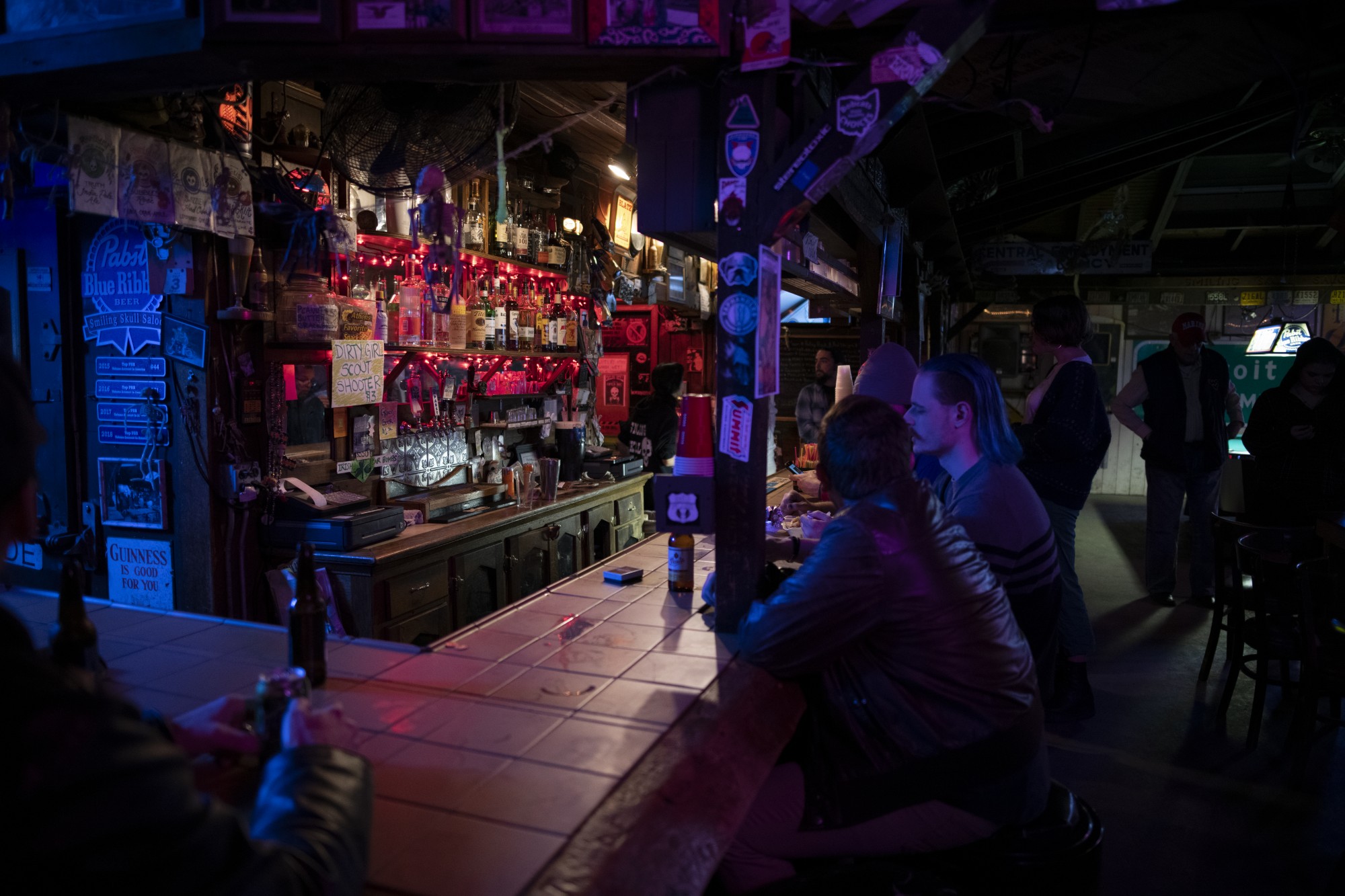 Wolf said being at 108 W. Union St. is a lot different than having a bar on Court Street because there is not usually a huge abundance of students, besides on Wednesday night when the bar does karaoke.

“This one is different than any other, I think. I’m speaking for a lot of people when I say that,” Wolf said. “Bikers for the summer, karaoke singers all winter long.”

Lauren McCain said she likes going to the Smiling Skull because it has a different vibe than the rest of the bars Uptown. She likes hanging out with the locals.

“It’s different from the bar scene here because it’s actually fun,” McCain, a sophomore studying journalism, said. “It’s so much more fun than being around other college students.”

Locke, 32, is part owner of the bar with his older sister, Adrienne Whitney, who is 35. Their father, Chris “Detroit” Wolf, started the bar in 1993 and ran it for 23 years before dying of cancer three years ago. After Chris died, Locke and Whitney decided to continue running the bar.

Although it wasn’t unexpected for them to take over, Whitney said it never crossed her mind until she got older. Whitney began bartending in 2005. Shortly after, Wolf began standing by the door and also bartending.

“It’s not changed much at all, and it probably won’t in the future,” Wolf said.

Both Wolf and Whitney were both born and raised in Athens. They also have an older sister who now lives in Cleveland.

Although Wolf has three kids, two boys and one girl, he said he wants them to get an education instead of taking over the bar. 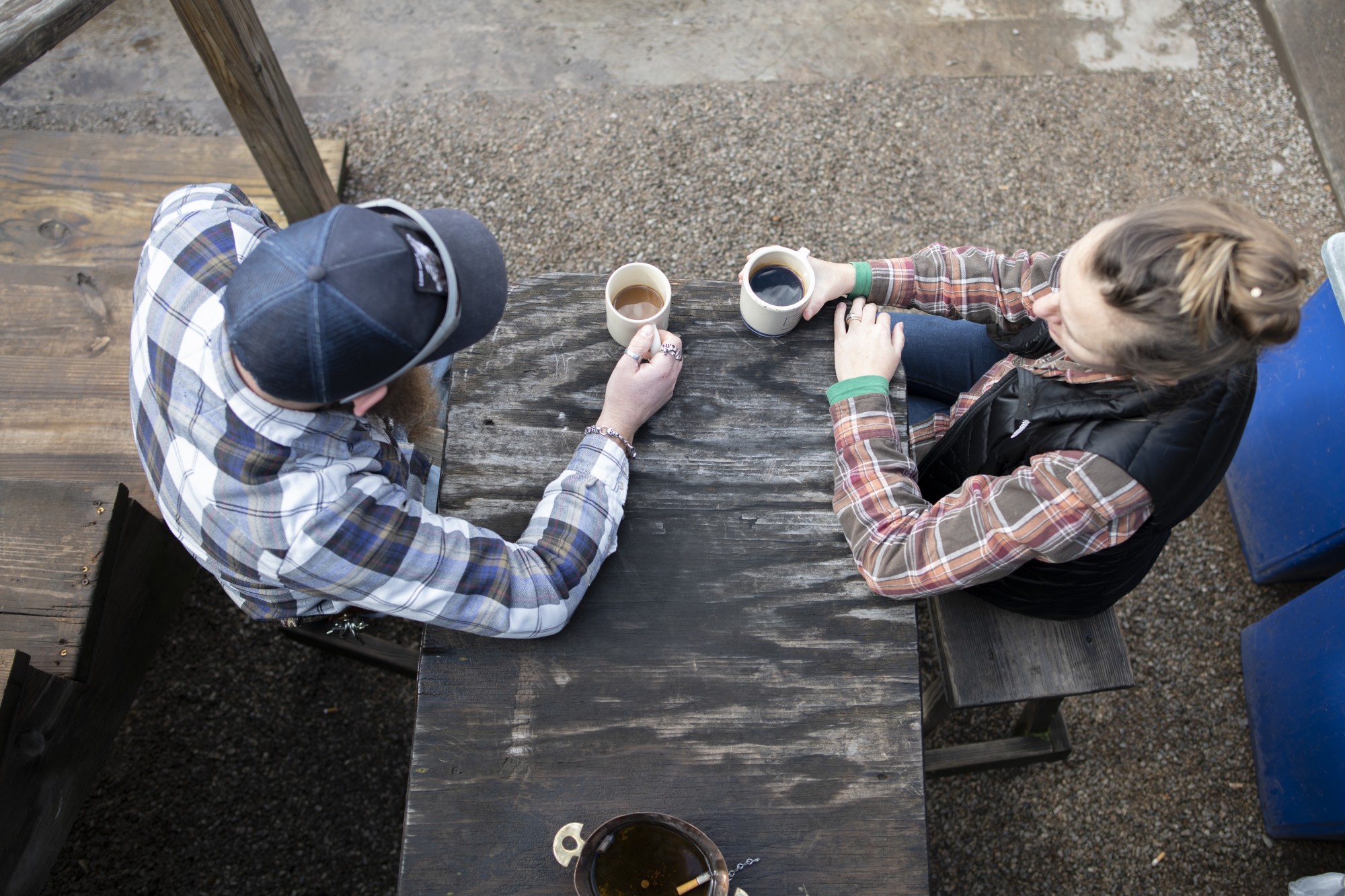 
“It’s tough,” Wolf said. “You gotta have thick skin sometimes. Mine isn’t thick enough sometimes, but on a personal level, I want my kids to go and get an education and go find something they have a love for and not just something that has been handed to them.”

Grasping his black coffee mug with fingers that have up to three skull rings adorned on each of them, Wolf tapped to the beat of the music coming from speakers. On his right wrist is a silver chain bracelet with a large silver skull on it. Through and through, Wolf is a biker.

“Our dad was into bikes I think before even having this place,” Wolf said. “Back in the day, it was a bunch of older guys who got together and went bar hopping. There’d be poker runs and benefits for people who have lost loved ones or people who are ill or a veteran.”

Whitney said biking often has a reputation for a “tough guy culture,” but really, it is just people being themselves and hanging out. While Whitney herself doesn’t ride, she often sits on the back of her husband’s bike while he does.

“You get to drink and act reckless,” Whitney said with a laugh. “Everybody loves to do that.”

When Wolf isn’t working, he’s riding. He said he often goes out west to places like Las Vegas or California. This August, he said he’s hoping to go to Sturgis, South Dakota, for the 80th Sturgis Motorcycle Rally. The trip is about 20 hours.

“You get a patch,” Wolf said excitedly. “Sounds ridiculous, but yeah. It’s really just getting on the road and forgetting about everything else and going somewhere new maybe. I've been riding since I was a kid.”

During the summer, bikers who are Athens residents or are touring through often make a stop at the Smiling Skull. When the weather is cold outside and is not good enough to bike, Wolf said he still sees a large number of regulars.

“We've known all these people since we were kids, and a lot of them are still our patrons,” Wolf said. “We've seen some of them go, come and go, or die. So there's a lot of sentimental value here.”

Michael Pack is one of those regulars who has been coming to the bar since it first opened its doors. He even met his wife, Amanda, at The Skull while she was bartending there while in college.

“It’s a cross between the typical Athens mentality. A little biker thrown in there. A little hillbilly thrown in there,” Pack said. “But most people that come here are from Athens. They have lived in Athens for a long time. Everybody that comes here knows everybody else.”

Like most patrons, Pack is also a biker. He said everyone who goes to the bar is his friends and family.

“This is the only biker bar around,” Pack said. “We like to line up out front occasionally, about five times a year at least.”

In total, he estimates there are about 100 regulars that traverse The Skull, coming in between when it opens or after work. The busiest time is around 3 p.m. when happy hour begins.

Wolf said the Smiling Skull is one of few bars in Athens that opens at 10 a.m. Most open in the afternoon around 3 p.m.

“It’s always been this way and always will be,” Wolf said. 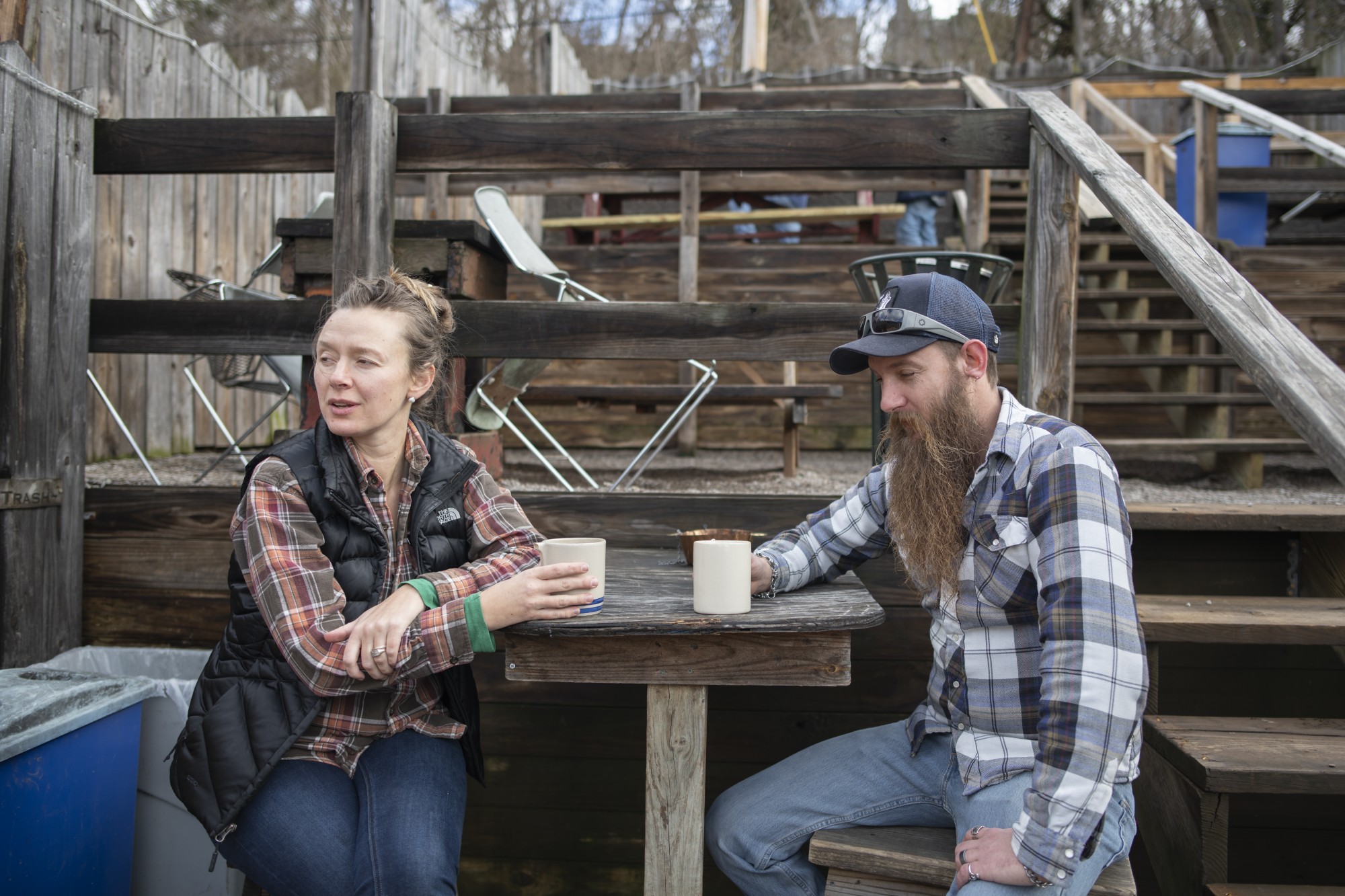 
Jed Anderson has been coming since he was a child. Now, he works as a bartender.

Sporting tattoos and wearing overalls, Anderson said he loves the bar and describes it as “one big, messed up family.” He has been bartending at The Skull since July but worked at the door before that.

“My mom used to come here, and she would bring me when I was a kid,” Anderson said. “I’ve known them all since I was 4 or 5 years old. We still have the same people coming in.”

As more locals gather outside, waiting for the clock to strike 10 a.m., Wolf finished up his coffee. Whitney is behind the bar organizing glasses. Wolf said a lot of the people who come through the bar are people he’s known for years.

“You have coffee drinkers and whiskey drinkers at this hour,” Wolf said. “We do count on them to get it going, but the nightlife is where it’s at. Dad always said, ‘Open the doors, and they will come.’”