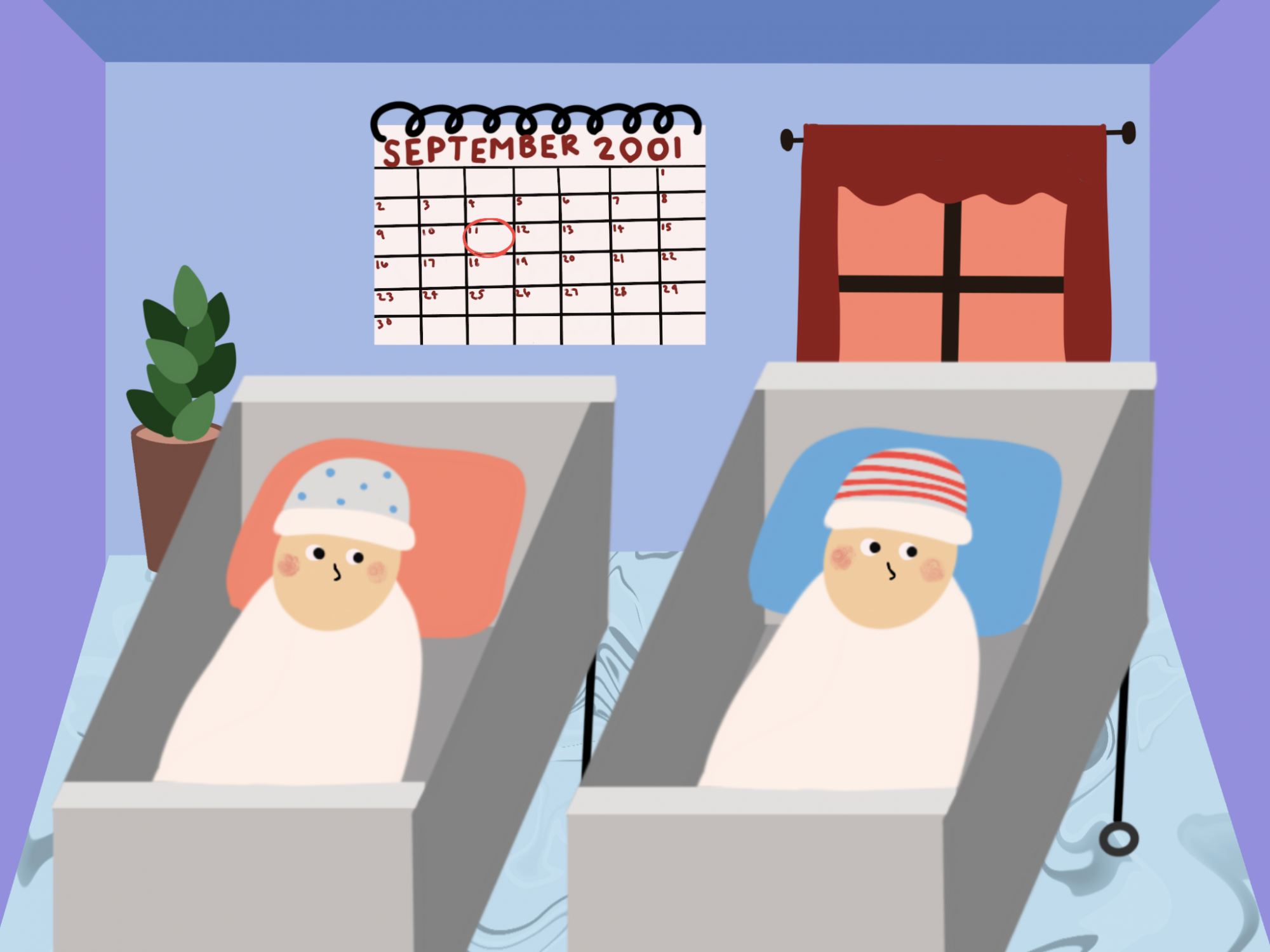 20 years later, 9/11 can still have an impact on current OU students

S am and Sophia Spinale have been together every year on the birthday they share, and this year will be their first apart.

The twins are both sophomores beginning their first full in-person year at Ohio University because of the COVID-19 pandemic, studying journalism and early childhood education, respectively. Sam will be out of town visiting her boyfriend, and Sophia will remain in Athens.

However, what won’t change is their commemoration for the people who died 20 years ago on their birthday: Sept. 11, 2001.

“We always make it a point on our birthday every year,” Sophia said. “My mom always said, ‘We lost a lot of lives that day, but we also gained two more.’” 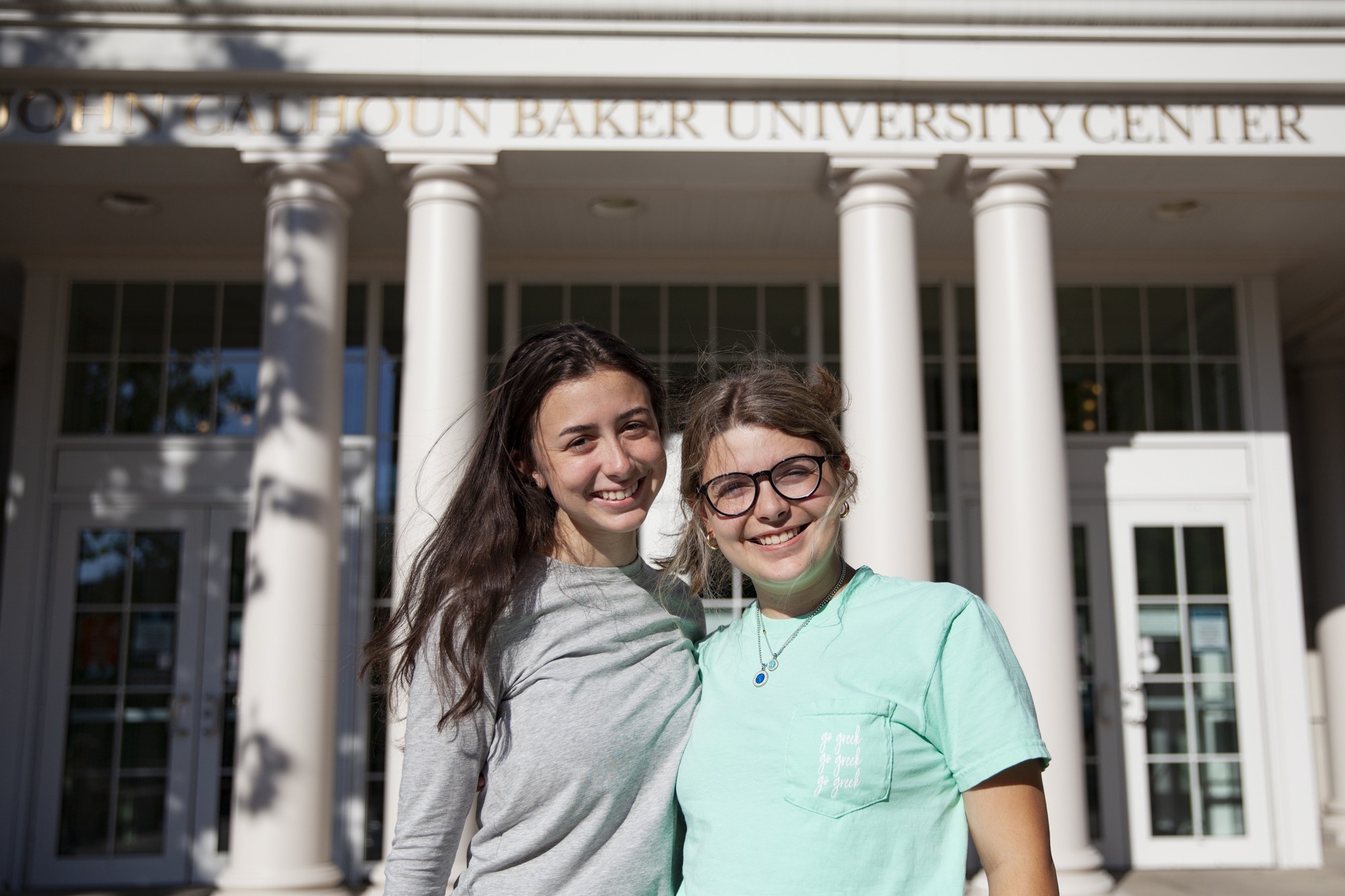 Twins Sam, left, and Sophia, right, in front of Baker University Center at Ohio University on Tuesday, Sept. 7, 2021. The twins were born on Sept. 11, 200,1 and have felt personally tied to the events of that day for their entire lives.

Over 20 years later, it can be a balancing act for OU students who share their birthday with a day of national tragedy and mourning. But those born on 9/11, as well as those born around that time who may not have firsthand memories of the events, have felt the effects of that day ever since. Despite this, the effects of 9/11 are not as direct on students now as they were for the generations who actually remember the day.

“I feel like now that we're older that it's like any other big tragic event,” Sophia Spinale said. “The farther away, the longer ago it happened, I think the less people realize that, ‘Oh, it's 9/11.’”

Ella Bathory-Peeler is a freshman studying dance through the Honors Tutorial College who was also born Sept. 11, 2001. Bathory-Peeler agrees the events of 9/11 don’t often come up as part of normal conversations.

“I think, in general, it's something that we don't talk about,” Bathory-Peeler said. “I think a lot of that has to do with the fact that we don't have that comparison.” 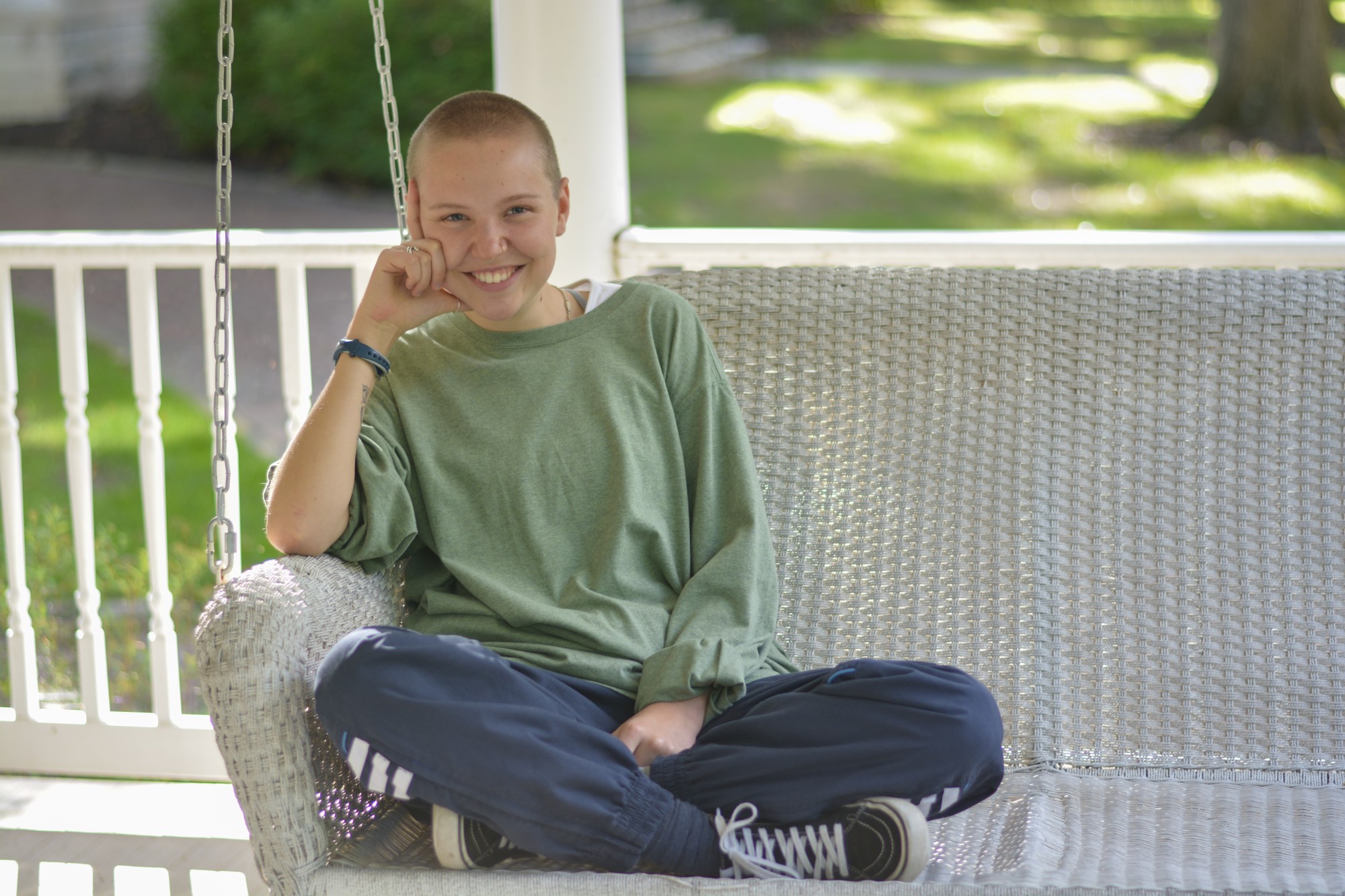 Those sharing a birthday with 9/11 don’t always have the choice for discussing the attacks because sharing that with an American tragedy can have lifelong impacts.

“I'm about to turn 20,” Bathory-Peeler said. “I don't really know how to unpack, or feel, about it. I think that's probably going to be a lifelong process of how do I celebrate me on my day, but how do I also honor and remember and continue to educate myself about what happened?”

Despite the lack of common discussion among most younger adults, 9/11 videos and media are still frequently shared in classroom settings, especially so on the actual day of the attacks.

Sam Spinale said one of her classes watched a documentary Tuesday, and over the years, both Spinale sisters remember the attacks being acknowledged during their K-12 education.

Noah Meade, a sophomore studying psychology who also shares his birthday with 9/11, said he feels like his peers don’t look upon the day as harshly as older adults do. 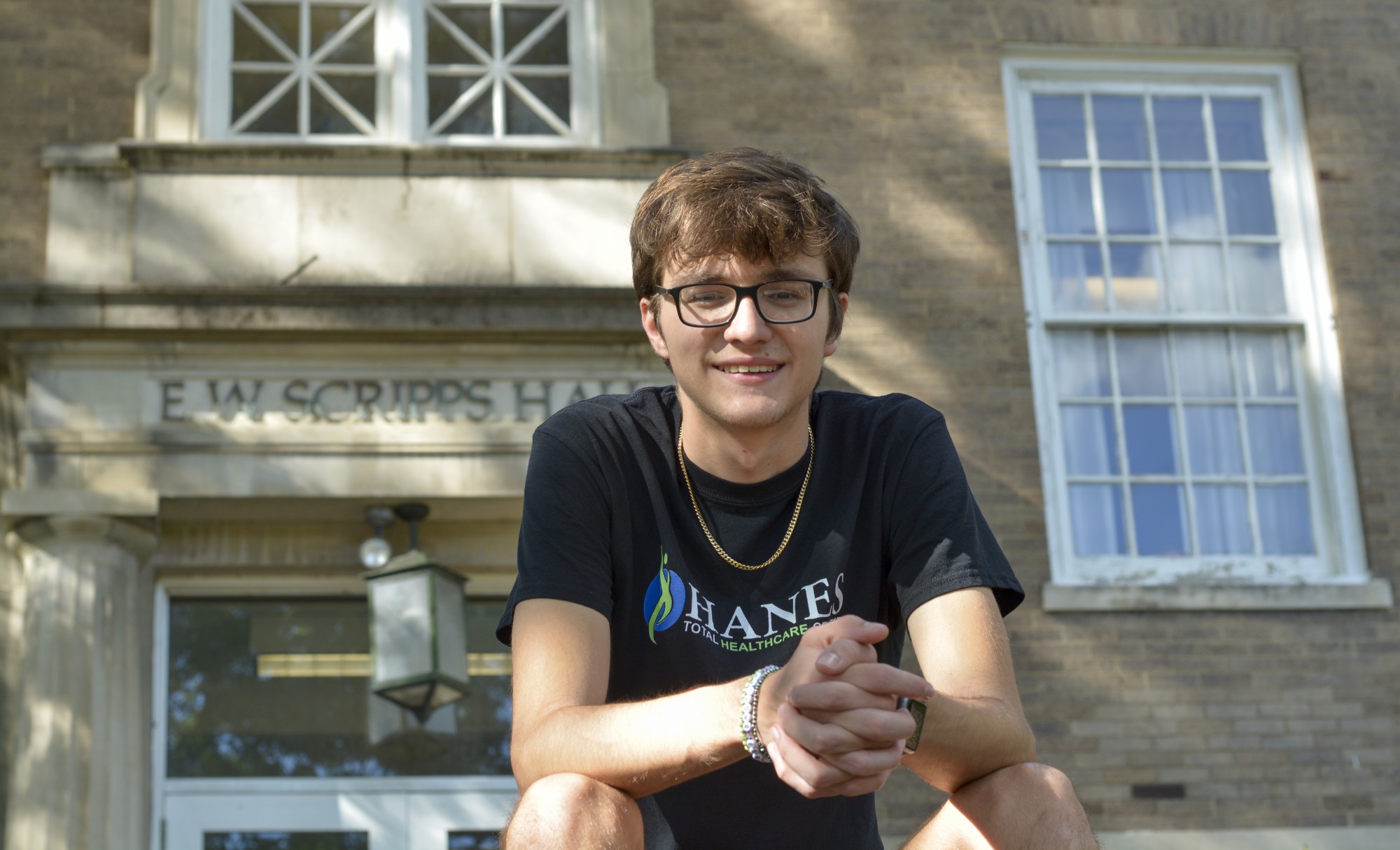 “But my peers still understand that it was an important thing and that we need to remember it,” Meade said.

Lurking below the more visible changes to American life after the events, like airport security, are a number of other factors at play for the generation born too late to remember the day.

“Memory is not just our firsthand experience of an event,” Chester Pach, an OU associate professor of history, said. “It's what we absorb in the context of daily life.”

The events, and the way they have persisted in popular culture in the past 20 years, have contributed to a sense of vulnerability that has permeated American society.

Nicholas Allan is an assistant professor of clinical psychology at OU and explained that added vulnerability and anxiety affected the way some parents have raised their children.

“Parents, and particularly anxious parents, who experienced an event like that are likely going to adapt and, potentially, in ways that aren't exactly beneficial to the children,” Allan said. “They might see the world as more dangerous, and they're going to talk about it in a way where kids who are susceptible to anxiety already, they're going to kind of internalize that more.”

The events led many parents to believe the world was a more dangerous place, and they raised their children accordingly, Allan said.

“There's also this element of uncertainty, right?” Allan asked theoretically, “Because it's not just dangerous, at least to their perception, but it's also uncertain. This could happen again.”

"My mom always said, 'We lost a lot of lives that day, but we also gained two more.'"—Sophia Spinale

Pach said part of the reason 9/11 has been so apparent in the lives of Americans who don’t remember the tragedy is because of its appearance in popular culture, from documentaries to the internet, and discussions about firsthand accounts from family members and relatives.

“It seems to me that 9/11 has generated so much interest that people just have watched movies or documentaries, whether it's on the History Channel, or something else about the terrorists, about the victims, about the first responders, about any group associated with it,” Pach said.

For Bathory-Peeler, the musical Come From Away, which tells the story of people diverted to Gander, Newfoundland, during the uncertainty of air travel on Sept. 11, 2001, has always stuck out. Cultural references have often come with an emotional response, Bathory-Peeler said.

For Sophia Spinale, she likes watching documentaries as a way of educating herself and looking at it from the positive perspective of heroism, she said.

“You're looking at all these heroes that were fighting for others,” Sophia said. “They did this for us.”

Sam Spinale said, in some ways, the twins have become historical advocates of the event because they share the day with the tragedy.

“When people ask us about it, we almost always have an answer and almost always know a ton of facts about it because it is interesting,” Sam said. “You can't help but research it when it's your birthday.”

From a young age, the sisters began watching documentaries and other media about 9/11, both on their birthday and throughout their childhood. Their mother never wanted to hide what happened that day, Sophia Spinale said.

Meade said every year on his birthday, he invariably makes an effort to watch the commemoration and the reading of the names of those who died in the attacks.

When he thinks of the legacy of the day, Meade said he always notices the national unity he feels the event brought, and still brings, today.

“We've also learned to appreciate ... people who do their jobs and do their duty in ways that maybe we may not have noticed that have had dramatic effects on saving lives and changing lives,” Pach said.

He mentioned the example of turning on a ball game and seeing first responders or members of the military sitting in an honored position and people in service jobs receiving more admiration in society as well.

Pach also noted the impact of having the U.S. at war for over 20 years in Afghanistan. Even if the war was not always on the front page of the newspaper or the highlighted story on the 6 o’clock news, Pach said many people who may not remember the events of 9/11 are still likely to pay attention to developments and conflict in the Middle East. There are also many with family members who served overseas in the conflicts related to 9/11.

Another large point today for many college-age students is understanding and combating the effects of Islamophobia stemming from the attacks in 2001.

Loren Lybarger, a professor of Islamic studies at OU, said in the wake of 9/11, discrimination against Muslim communities, as well as those who fit a certain appearance or are simply from the Middle East, greatly affected people across the country and still impacts the lives of young Muslim American people born after the events of 9/11.

Today, Lybarger feels as though many in the younger generation have lost interest in learning about the Islamic faith and the people who practice it, and this has been reflected through a drop in numbers for his classes on the subject. Despite the lack of interest in learning at OU, Lybarger said anti-Muslim rhetoric has still been prevelant in politics in recent years, with a very visible example being the Trump administration.

“This is something that is not going to go away, and we have to continue to be interested,” Lybarger said. “We have to be continuing to be aware of anti-Muslim racism, the legacy of Orientalism, and continue to develop our self-critical awareness and knowledge.”

Bathory-Peeler thinks the legacy left from the generation born on and after 9/11 will be fighting Islamophobia and racism toward people from the Middle East and feels the topic of 9/11 is most often brought up in discussions about racism, xenophobia and Islamophobia.

“As we continue to try to break race barriers and bring everything to the next level, I think, if anything, that's what our generation is going to continue talking about,” Bathory-Peeler said.

“Never Forget” is a phrase often associated with 9/11, and while those who share a birthday with it certainly never will, there are different thoughts on how 9/11 will be treated moving forward from the 20-year mark by the group of people too young to remember it.

Allan thinks because of the impact COVID-19 has had on the group of people who don’t remember 9/11, it will be a more prominent memory, and stressor, than 9/11 because of the firsthand experiences.

“We're going to talk about COVID,” Bathory-Peeler said. “We know the effects of it. We understand the difference. We understand how it affected our lives. But for us, and for my peers, for people that were born in 2001, 2002, I haven't experienced it coming up in conversation because we don't have that direct, stark comparison.”

Just because the COVID-19 pandemic has had a prevalent spot in the generation’s memory does not mean 9/11 won’t be remembered at all, however.

“Only because our generation was born so close to when it happened, it's hard to forget,” Sam Spinale said. “I mean, people still remember Pearl Harbor to this day. That was a very long time ago.”

Meade said he feels it shouldn’t be forgotten because it still could happen again.

“I think everybody needs to remember it's just an important day, and we need to know that it can always happen,” Meade said.

At least four OU students will remember 9/11 this Saturday, and every birthday, for the rest of their lives.

Mixing remembrance and festivities, all four will observe the painful impacts of the day in some way, from documentaries to processing memories to discussing with family and friends.

That doesn’t mean that each of them won’t celebrate themselves, though.

Sam Spinale will be traveling to see her boyfriend while Sophia Spinale will take in the day with friends in Athens. Noah Meade said he hoped to get dinner and spend time with his friends as well. Ella Bathory-Peeler plans on taking a video capturing life as it is today and tucking it away to be watched upon turning 25.