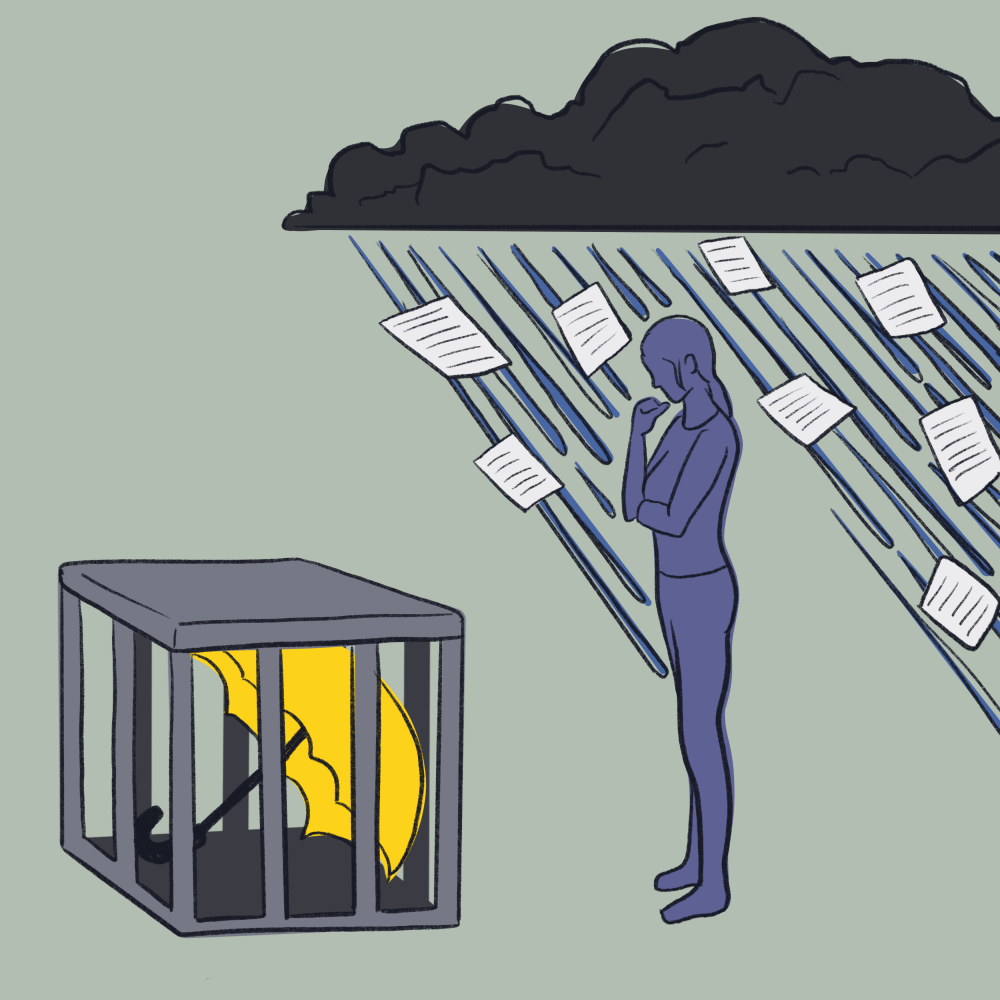 Receiving accommodations for mental health conditions may be difficult

When someone gets sick, they expect to be able to take care of the problem, rest up and return to working soon after. But for Eva Holtkamp, she could do nothing but sleep. She was so sick with mono that she needed her tonsils removed.

But in one of her classes, she missed more than five sessions and wasn’t going to receive any participation or attendance credit for the semester. She cried to her doctor, and the assistant dean of students had to email all of her teachers saying something one would think professors would know: You cannot punish a student for getting mono.

“It’s something that our generation particularly is becoming much more accepting and talking about, but it’s hard to further the conversation and make it more inclusive if the people who are giving us our grades are not accommodating.”Eva Holtkamp, a senior studying strategic communication and political science

“I was in a situation where I could advocate for myself,” Holtkamp, a junior studying strategic communication and political science, said. “But so many students are not comfortable enough to advocate for themselves or be confrontational with a professor because they’re in a superior position to you. And if you don’t do that, it’s highly, highly possible that you will basically get screwed over, which sucks.”

Holtkamp had a physical illness and was able to handle the situation herself. For some students, advocating for themselves isn’t always easy, and for students with mental health conditions, that process can become even more difficult.

“They’re not lying to you if they say they have (a mental health condition). It’s not a bulls--t excuse,” Holtkamp said. “It’s something that our generation particularly is becoming much more accepting and talking about, but it’s hard to further the conversation and make it more inclusive if the people who are giving us our grades are not accommodating.”

OU Student Senate President Maddie Sloat said although she doesn’t have specific personal experiences that she can speak about, she has worked as a resident assistant and an assistant resident director and has seen how counselors at Counseling and Psychological Services and the Let’s Talk hours can advocate for students.

“However, we continue to face the challenge of these resources not being able to keep up with the demand of students for mental health services, meaning that students could go for weeks without the services they need,” Sloat said in an email. “I’m not positive about (generally) how receptive professors are to issues relating to mental health, especially in relation to class absences, but I think we can always do more to prioritize mental health and support our students.”

For Darragh Liaskos, seeking accommodations is seen as taking action for her life. Last year, Liaskos was diagnosed with borderline personality disorder. She has been working with psychiatrists at Counseling and Psychological Services to understand that diagnosis and see if borderline personality disorder is the correct one, or if it could be “bipolar disorder or whatever or if (she) was just going through a rough time.”

Liaskos said for a while, she didn’t see her mental health condition as a disability. Now, she’s come to terms with the fact that it affects how she goes to class, how she gets out of bed in the morning and how she lives her day-to-day life.

In some of her classes, Liaskos, a senior studying media and social change, said her mental health has affected her performance “100 percent.” Last fall, she was set to graduate early but instead needed to leave school because she didn’t know where to turn for resources or how to access them. Now, she is set up with Student Accessibility Services because of the way the condition affects her life.

Sometimes, however, those accommodations aren’t always taken seriously, she said.

“It’s frustrating when you’ve gone to the lengths to go through all of the stuff that you have to go through to get Student Accessibility Services and for them to throw it back in your face,” Liaskos said. “They’re not actually allowed to do that, and you can file a complaint, but in my personal experience, nothing really gets done because you can’t change a professor’s biases, so even if they can’t legally discriminate against you, they can make your life a lot harder than it needs to be.”

Liaskos said she is very open about her mental health condition and what it’s like for her. It doesn’t bother her to talk about it, but not everyone is like that when it comes to talking about mental health.

“I just know that if I was a different person, I might not want to go through all the effort, but it’s kind of necessary,” Liaskos said.

Student Accessibility Services says its mission is “to ensure equal opportunity and access for members of the Ohio University community.” About 1,100 students come and go from using the services each year, Assistant Dean for Accessibility Carey Busch said. Of those 1,100 students, about 8 to 10 percent will be registered because of a mental health or psychological condition.

When it comes to figuring out if a student needs accommodations and what kind, there’s no checklist or formula. Instead, the department looks at the way the disability impacts the person and how it influences their learning. Two students who have the same diagnosis could be affected in very different ways, so it comes down to a case-by-case basis, Busch said. Often, mental health symptoms may come and go over the course of a semester, so it’s not as easy to plan for as other disabilities or conditions.

“We may be looking at creating almost a contingency plan, so if everything is fine, this might not be needed, but if they start experiencing more symptoms, it’s there as a safety net,” Busch said.

Under the law, the university is required to provide reasonable accommodations for people with disabilities. Those accommodations, however, “cannot fundamentally alter the course outcomes,” Busch said. Because of that, there is some variability between how different classes and departments can accommodate students. A class where one is learning a language or public speaking, for example, relies significantly on a student’s participation and attendance to demonstrate how they are mastering the material. A bigger lecture class or a class focused on going through notes and involves more passive learning, however, could have some greater flexibility.

Students who struggle with mental health conditions could get some accommodations with attendance or deadlines. They need to meet with their accessibility coordinator to go over their course syllabi to understand what the expectations are. That process, however, can seem monotonous to some students.

“I think the process they have is definitely necessary,” Liaskos said. “It can seem a little tedious going through all the paperwork and having to submit your syllabi and getting your professors in contact with them and vice versa and all that stuff. But I don’t really have a solution on how to make it easier.”

Stigma still surrounds mental illnesses, and it can be difficult to combat people’s differing opinions on top of navigating a new diagnosis. Liaskos, for example, has felt like she’s been perceived as lazy or like she’s not doing enough when she’s talked to professors. 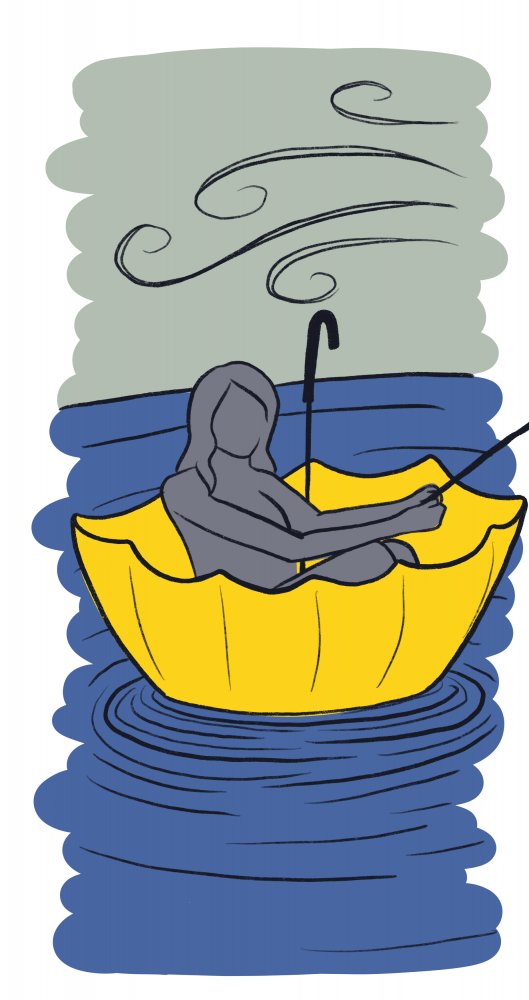 “Going up to your professor … to talk about this is extremely terrifying for some people,” she said. “I remember the first time I went up to a professor to ask about accommodations, and they were very dismissive. I ended up getting the accommodations, but they were like ,‘You already have these many days in the syllabus. I don’t know if I can go any more.’”

Many people agreed that there’s always room for improvement when it comes to how students and the university handle adjustments for mental health. Liaskos thinks it takes agency, and people have to go out and find resources for themselves.

Busch thinks part of it could come down to resources as well. She thinks it could be challenging if a student doesn’t connect with the accessibilities office, and some of it is on the office and faculty members. She thinks there are ways all of those factors — student, Student Accessibility Services and faculty — could work together.

When it comes to what students could do, Busch thinks they don’t always anticipate needing that extra flexibility. Sometimes, students don’t seek accommodations until they reach a very difficult point.

“I think with our office, it comes down to resources and staffing,” Busch said. “It takes … a lot of intense time to coordinate, and so sometimes it takes a little bit of time to move through those conversations with faculty. And … the third element … is for faculty to really engage in our conversation with (professors).”

Madeline Baker, a senior studying public advocacy and communications, said one way to help with getting professors and faculty to understand the need for accommodations is to talk about it on evaluations and in general more often.

“If you want to take the mental well-being of students seriously, you need to be seriously looking at those evaluations,” Baker said. “If it’s a repeated thing that it’s shown that a professor or specific department is not accommodating students, that needs to be talked about.”

The National Alliance on Mental Illness thinks students should start the conversation early and let the school know as soon as possible before any serious challenges happen in classes.

“It’s not, ‘Oh, you’re so brave.’ You’re taking action for your life, and people with mental illnesses … aren’t asking for attention,” Liaskos said. “We’re just normal people who have deficiencies in certain areas, and it’s like you don’t know who could be next to you dealing with these issues.”