Ohio University’s telescope, located inside the observatory at the top of Water Tower Drive at The Ridges, underwent extensive work to its appearance before it was able to be used by the public.

Originally, the 10-inch J.W. Fecker refractor telescope was installed in 1950. The telescope is an American treasure, and it appears to be the very last of the great refractors ever to be built in the world, Thomas O’Grady, a part-time astronomy assistant, said. Many were built in the 1800s and into the 1900s, but none were made after the one OU currently owns.

George Eberts, an astronomy instructor and outreach specialist, said the telescope was first accessible to the public on the roof of the Research and Technology Center.

There were events that O’Grady recalls early in his career that attracted viewers to the telescope.

O’Grady worked with Eberts and the telescope in 1986 to show the Halley’s Comet to over a thousand people.

“It was between 10 and 15 degrees out and people waited in line for a long time to see Halley’s Comet,” O’Grady said in an email. “They had heard about it since third grade and now it was here.”

Then, in the summer of 1994, Eberts and Grady showed Comet Shoemaker-Levy 9, a comet that broke apart in July 1992 and collided with Jupiter in July 1994, O’Grady said.

“People got a chance to see Jupiter with two huge black spots on it,” O’Grady said in an email. “It looked like Jupiter was looking back at them. That telescope proved to be a real workhorse in the 1980s and 1990s.” 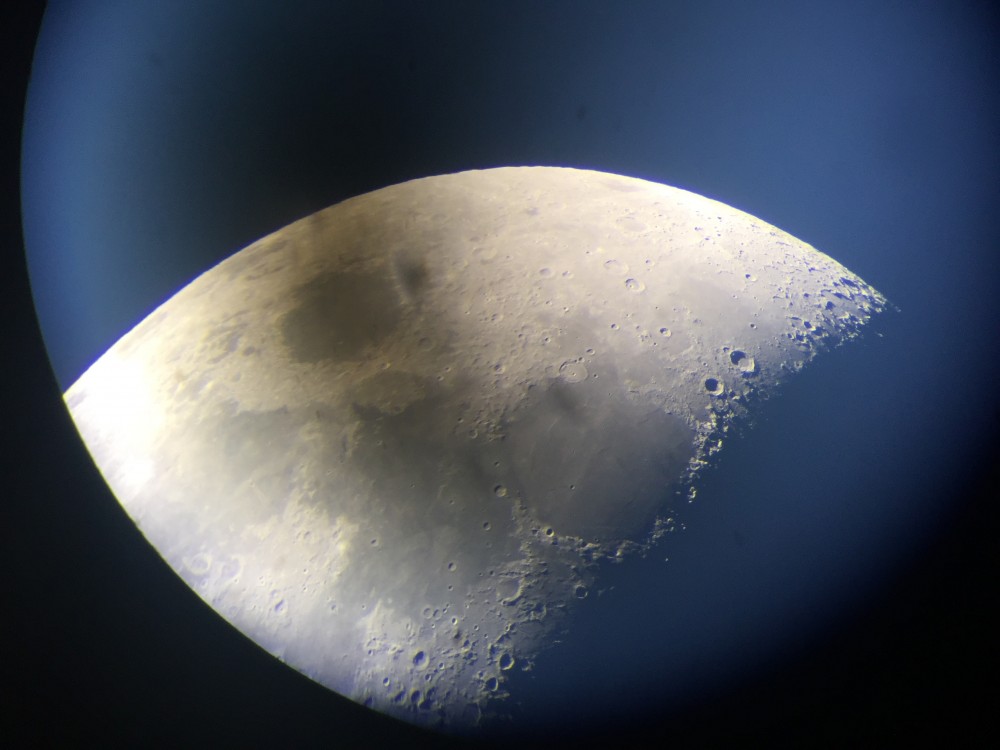 The roof of the Research and Technology Center had a wooden shed, which had accordion doors which would roll the roof backward and allow the telescope to look into the sky, Eberts said.

“This shed was a piece of shit, it was bad. It had cracks in the ceiling … ,” Eberts said. “So, the soot and the rain got into the shed, the motor stopped working very well. Finally, the telescope slowed way down.”

A math professor at the time attempted to fund a dome for the telescope, so the shed became a temporary shelter, Eberts said.

“(The shed) lasted unfortunately over 50 years,” Eberts said. “From 1981 on, I was using it for my classes but it just kept slowing down and getting harder to deal with.”

Finally, in 2006, Doug Shafer, a mechanical system technician for the department of Physics and Astronomy, met on the roof of the building with some of his colleagues to discuss the future of the telescope.

“At that particular point in time, we hadn't really established a new location to bring it down off the roof and prepare it for a complete restoration,” Shafer said. “They asked if it could be done and I said yes.”

Shafer had taken apart other machines before, but this was his first time taking apart a telescope, he said.

“I had my own machine shop for close to 20 years, so this wasn't something I knew I wouldn't be able to do,” Shafer said. “It was not feasible to try to just take the whole telescope, assembled, and bring it off the roof. It had to be completely disassembled in its entirety in order to properly refurbish it.”

So, Shafer began to work on the telescope when he could fit the time in around his other responsibilities at his job.

“I've been accused of reverse engineering, because I am. We don't have time to talk about my past.”-Doug Shafer

Shafer started by dismantling the telescope, piece by piece, down to the last nut, bolt and screw and transported them all to Clippinger, where he had a room dedicated to rebuilding the telescope. 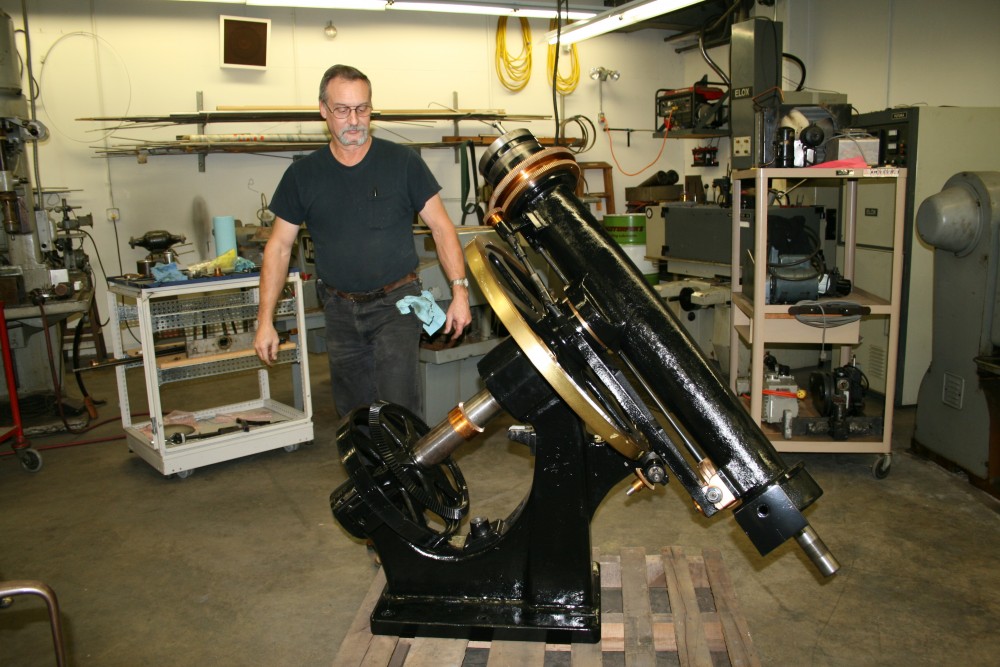 Doug Shafer with the dial of the telescope in the basement of Clippinger.


“I just took it apart and put it back together,” Shafer said. “I've been accused of reverse engineering, because I am. We don't have time to talk about my past.”

There were many small pieces and parts of the telescope that took time and care to fix. Shafer said he cannot give a definite time when the refurbishment process was complete, but it was done before the grand opening of the Observatory.

While the Observatory has been open to the public since May 2017, Shafer said he is still working on other small details on the telescope. He also maintains upkeep and helps with anything the instructors might have questions about.

“It's beautiful when it's restored and it's a challenge because it's old technology,” Eberts said. “An engineer, machine shop guys, really feel their roots coming out when they mess with this stuff. This is what their fathers and grandfathers worked with. And telescope restoration is sort of a thing within itself. It's a cool thing to do.”

Eberts, O’Grady and other faculty and students help to host public viewing nights at the observatory.

“The nights scheduled are always dependent on clear skies,” O’Grady said in an email. “It is difficult to plan clear skies ahead of time so we get some cancellations. Otherwise, we use the telescope for our classes.”

“An engineer, machine shop guys, really feel their roots coming out when they mess with this stuff. This is what their fathers and grandfathers worked with. And telescope restoration is sort of a thing within itself. It's a cool thing to do.”-George Eberts

O’Grady said his favorite part about using the telescope is listening to the reactions of the viewers.

“They are all over the map. Some have no reaction. Some have a great ‘WOW’ and that is the best,” he said in an email. “When we show people the rings of Saturn, we often hear someone remark that it looks fake. The real crowd pleasers are Saturn, Jupiter and our Moon. The craters on the Moon are almost always the most exciting for people because it is so big and close.” 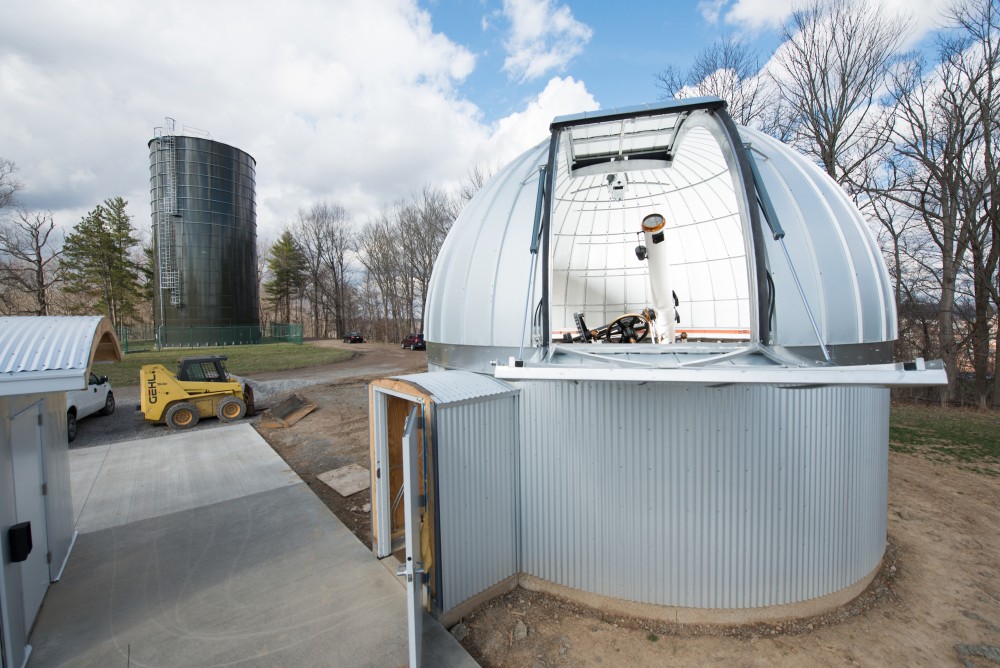 The telescope sits in the observatory in 2017, waiting to be opened to the public.


Shafer said many people come to the public viewing nights.

“It's good to see how many people appreciate it … ,” Shafer said. “They'll have crowds of 60 to 100 people. It's finally become a real useful instrument and it should be that way for many years to come.”