ApoA-IV is a protein that will tell the brain to stop eating, then converts fat to energy.

Ohio University researchers at the Heritage College of Osteopathic Medicine, or HCOM, have discovered a new protein strand that will fight obesity and Type 2 diabetes.

Chunmin Lo, an assistant professor of biomedical sciences, is the principal researcher. Lo first discovered a new biological function of the protein in 2013 but did not begin her research at OU until 2015.

The research focuses on the effects of the protein that naturally occur in the body. 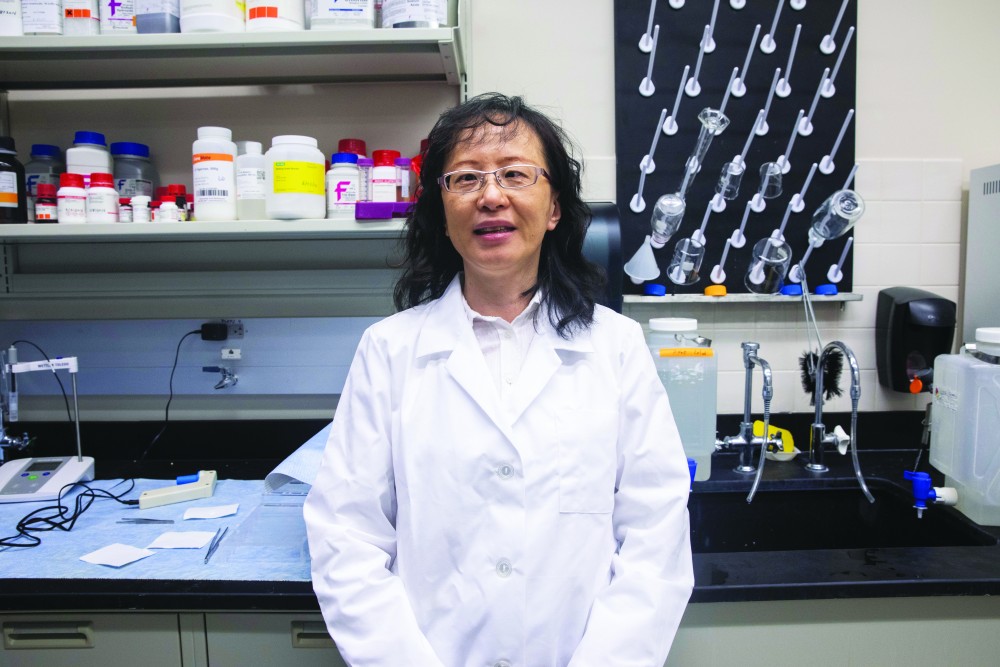 Dr. Chunmin Lo, who teaches biomedical sciences at Ohio University, began her research study in Cincinnati, OH a decade ago, which is hypothesized to fight obesity and Type 2 Diabetes. She stands in her research lab for a portrait on March 5, 2019.

“When a person eats a meal high in fat, the small intestine secretes a glycoprotein called Apolipoprotein A-IV, or ApoA-IV,” Lo said.

ApoA-IV is a type of satiation protein, which means the protein will send signals to the brain telling it to stop eating.

“Our hypothesis is that the protein can decrease food intake and increase energy expenditure,” Lo said.

The main focus of the research is to examine the way brown adipose tissue, or BAT, converts fatty acids into energy, specifically heat. The conversion of fatty acids to heat energy helps to fight obesity.

“In the first phase, we want to know is it possible that this protein could increase the energy expenditure and breakdown of lipids in brown adipose tissue and generate heat,” Lo said. “The second part is we want to know about the neural systems involved.”

ApoA-IV creates heat production in BAT, which may involve stimulations of neural circuits related to BAT. Neural circuits are a large group of neurons which interconnect to send large signals to the brain.

The research is to correlate ApoA-IV with food intake as well as stimulating BAT to produce heat.

“Overall, this research examining how a particular protein (ApoA-IV) may have such a large impact on metabolism is groundbreaking,” Leslie Consitt, an associate professor in biomedical sciences, said in an email.

Consitt became a part of the research in 2015, assisting in measurements of mitochondrial respiration, or how energy is produced.

When it is discovered how BAT produces energy, researchers will be able to identify if ApoA-IV plays a role in fighting obesity.

In the United States, obesity, a condition associated with having an excess amount of body fat, is a growing problem. Health care professionals are even classifying it as an epidemic.

According to the Center for Disease Control and Prevention, or CDC, about 40 percent of people in the United States are considered to be obese.

The CDC also states obesity is a large constituting factor to other diseases. Heart disease, stroke, Type 2 diabetes and some cancers are all examples of obesity-related conditions.

While the CDC does not say obesity is the cause of death for any person, it does claim obesity to be the main contributor to heart disease. Every year, 598,000 people die from heart disease, making it the number one killer in the U.S, which is 1,000 more people per year than all cancers combined.

Obesity is also a main contributor to Type 2 diabetes, according to the Obesity Society Program. About 90 percent of people with Type 2 diabetes are obese.

“Obesity leads to Type 2 diabetes, and we want to fight both,” Lo said.

Type 2 diabetes is caused by a lack of insulin consumed by the pancreas. This is largely in obese adults, but can also be found in children, according to the CDC.

Due to the mass importance of the project, Lo and her fellow researchers received a $465,000 grant from the National Institutes of Health to perform further research on ApoA-IV.

Lo and her colleagues are testing ApoA-IV in the bodies of small rodents, like mice and rats. The rodents have been given high-fat diets to force them to be obese.

The protein is injected in the rodents to see if Lo’s hypothesis is correct. The researchers are still examining the rodents and ApoA-IV’s fight against obesity.

“Ultimately, our primary goal is to prevent or treat diabetes,” Consitt said in an email. “If ApoA-IV plays a role, it could ultimately provide great advancements in diabetes care and treatment.”