How an infestatious pest has killed Eastern Hemlock trees across Appalachia

On the underside of an eastern hemlock tree rest hundreds of white fuzzy insects. Over time they slowly suck the sap out of the tree, eventually killing it if left untreated.

All of the insects are female and are able to make clones of themselves. They can produce up to two generations per year and don’t require sexual reproduction, Joe Moosbrugger, assistant preserve manager of Crane Hollow, a state nature preserve in Hocking County, said.

“If you have one woolly adelgid that makes it to springtime, it can make 200 copies of itself. Those 200 copies later make copies,” Moosbrugger said. “It can expand exponentially. It’s great when we get these polar vortexes that will kill 98 percent but the problem is if you get one that survives, the numbers can completely ramp back up.”

Moosbrugger said the issue is that while there may be native predators to the hemlock woolly adelgid, there are not enough to curb the issue.

Susan Calhoun is Ohio University’s landscape coordinator. She said she has not yet seen hemlock woolly adelgid on OU property, but it is in Athens County and will likely be here soon.

“It will come closer the more local trees get it,” Calhoun said. “It’s all around us. The one good thing about the treatment is that it’s systemic. If (the adelgid) comes and it bites the tree, it dies.”

Last year, Calhoun and an environmental studies graduate student, Meg Little, started to locate all of the hemlock trees at OU. There are about 90 hemlock trees currently present.

She said the best time to look for the pests are in the winter because they are present on the underside of the leaves. They are a black beetle, and in the winter they form woolly masses to protect themselves from the cold. In the summer, you can barely see them. 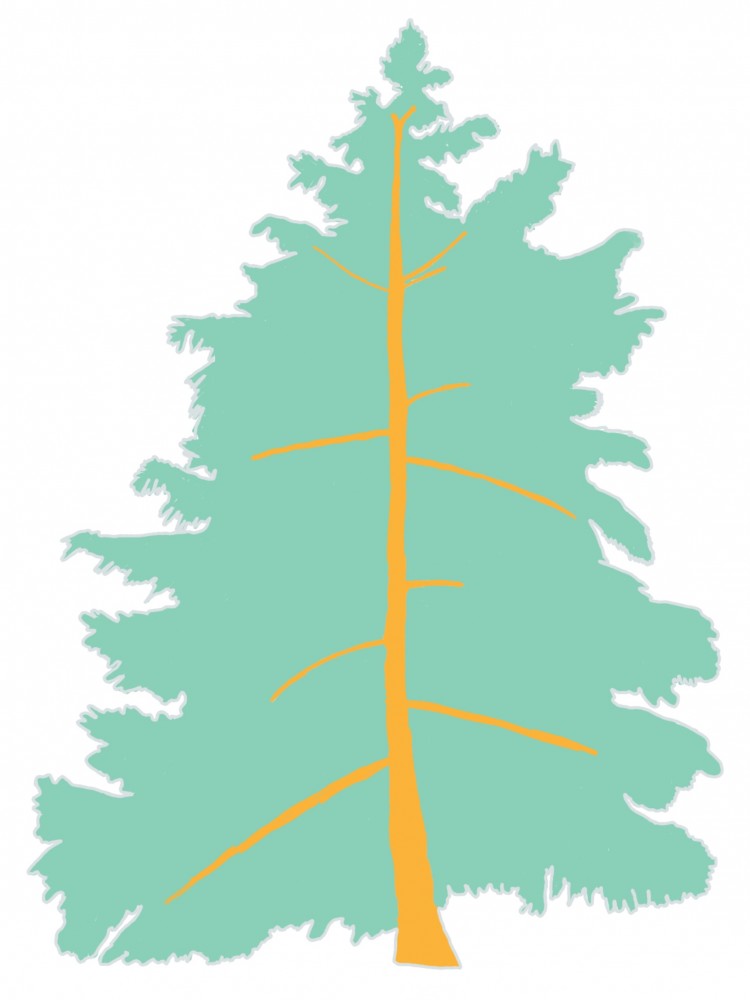 ”We’ve done our first pass and we’re OK so far. I’m feeling pretty good because we’ve been watching and we’re going to be ready,” Calhoun said. “Every winter we will go now and look.”

Little said an invasive species comes from somewhere else and doesn’t have any natural predators in the new environment, which makes it easy for the population to explode.

Hemlock trees are one of the native evergreen species in the region and tend to grow on streambeds. They play an important role in temperature regulation of streams, Little said. Ninety-six avian species and 47 mammalian species depend on or use hemlock trees for habitat or food.

“If they get wiped out, they are not an aggressive grower, so it could potentially take thousands of years for them to come back, and then we have climate change contesting with that,” Little said. “It’s scary to think about what these ecosystems would be like without hemlock because they are a dominant species.”

Hemlock is patchy where it grows, Tom Macy, the Forest Health Program administrator for the Ohio Department of Natural Resources, said. The largest concentration of hemlock in Ohio is the Hocking Hills area, and the second largest is in Jackson County outside of Lake Katharine State Nature Preserve.

Crane Hollow is a private nature preserve used for research and education purposes about a 45-minute drive from Athens. Last March, Crane Hollow found adelgid for the first time.

“We don’t have too many native tree species in Ohio,” Moosbrugger said. “They really change the light regime and the moisture regime in the forest. In a lot of broadleaf forests, you’re going to get a lot of sun hitting the forest floor.”

“Loss of trees in a community can be directly linked to reduced age and health. You have these communities where trees are cut down and greater instances of earlier death and depression. People need forests. ”Jesse Webster

In 2016 the ODNR Division of Forestry hired people to look for adelgids, but they were unable to find any. In 2018, the state forest hired more officials who found several in different areas of Hocking Hills.

Moosbrugger said Crane Hollow has had it light compared to other regions, such as Hocking Hills.

“If we were to do nothing though, the whole ecology of the area would be diminished. Some of it depends on the area and how quickly these are found,” Moosbrugger said. “In Appalachia it seems that hemlock woolly adelgid really just wiped things out when it doesn’t get as cold because the adelgid can really just take off.”

To treat the adelgids, Moosbrugger said he uses tablets designed to kill invertebrates. They’re easier to carry into the woods than liquid chemicals. They also have used a liquid foundation that is put into the ground, which he said is primarily what the state of Ohio is doing.

“We don’t want to over treat things so there’s a limit to how much pesticide you can put in a specific area,” Moosbrugger said. “We weren’t able to treat every last tree. We’re going back in 2019 to finish treating the area.”

If hemlocks are close to a stream, however, he said they will inject the tree with the treatment to avoid putting pesticide in water.

Over 12 counties in Ohio have infested hemlock forests. Most are in southern Ohio, but some have also been east of Cleveland. He said he has not seen a decline in the number of trees yet from the adelgid because the infestations are in the early stages.

“We’re focusing more of our survey and treatment work in Hocking Hills because it is such an important area ecologically and for tourism,” Macy said.

Macy said while chemical treatment is the most effective, it is not long term. Instead, ODNR has released a predatory beetle as a long-term biological control.

“Those are tiny beetles that specialize in eating adelgids,” Macy said. “Where we have these spot infestations popping up, we mainly use beetles to try to eradicate the insect and slow the spread of it. There’s enough infested trees that we may not be able to treat every infested hemlock tree.”

There are two beetle species that have been approved to be released, as the beetles will not become a pest themselves in the environment, Macy said. They don’t have a common name, such as the stag beetle or ladybird beetle, and are both in the genus laricobius.

“In some areas they appear to be effective and it looks like the biocontrols are working,” Macy said. “It’s hard to tell how effective they will be. It’s still early. Trying to establish a new insect in an area is pretty difficult, and it’s going to take years of these releases for them to take hold.”

Even when beetles are released, ODNR will often still use pesticides to ensure the trees will live, Macy said.

The adelgid is not just in Ohio, but all around Appalachia. It has affected the Great Smoky Mountains National Park, which is one of the places that was quick to fight it. There are over 16 million eastern hemlock trees in the Smokies.

Jesse Webster, coordinator for the hemlock conservation program at the Great Smoky Mountains National Park, has helped the hemlock trees, as well as has trained others who are treating them. He taught Macy how to help Ohio with the adelgid.

He said the park has treated more than a quarter of a million trees, and if they hadn’t the majority of them would be gone.

The Smoky Mountains first found hemlock woolly adelgid in 2002, but they were likely present in the late 1990s.

“You’re looking at the loss of millions of trees that are a foundational species,” Webster said. “They’re the great moderator of hydrologic processes. There’s really a cascading effect across the landscape that is still playing out. It’s changing the landscape in the grand scheme.”

The adelgid is also causing physical damage, as the trees are coming down in campgrounds or on facilities, Webster said.

“Visitor protection is our number-one priority. Then you get into the greater conservation of the park,” Webster said. “We’ve made a tremendous amount of positive effects.”

The loss of trees can be detrimental to a community and create health issues, Webster said.

“Loss of trees in a community can be directly linked to reduced age and health,” Webster said. “You have these communities where trees are cut down and greater instances of earlier death and depression. People need forests.”

Macy said his goal has been to preserve high-priority areas, such as Hocking Hills, because they are high in tourism. Luckily, he has been able to learn how to treat the trees from people’s experiences, such as Webster’s, and others.

“It’s not a pest that is going to go away,” Macy said. “We’re doing all we can and we’re early in this. There’s not a lot gone yet.”

Although it is cold enough right now in Ohio to kill some of the adelgid, climate change may stop aiding as a pesticide in 10 to 20 years, he said.

“Right now these hemlock trees are big things and adelgids are pretty small, and it’s not going to kill (the trees) in the first year,” Moosbrugger said. “It’s going to be kind of a slow death.”

Webster said that the adelgid are becoming resistant to the cold and moving further north, which is why it is now in Ohio.

“It’s a chronic disease,” Webster said. “It doesn’t happen overnight, but in 10 to 20 years from now 80 percent of what is left will be gone. Over time, (the hemlock trees) will all disappear.”