Dysart Woods holds the natural legacy of more than 300 years

In the past year, Ohio University-owned Dysart Woods was inducted into the Old-Growth Forest Network, which is a non-profit network of old-growth forests around the country.

OU uses the more than 400 acres of woods as an all-natural laboratory. Although there are about 50 acres of old-growth forest, or natural forest that has developed over a long period of time, the rest of the land is younger-growth forest and abandoned fields.

The forests that are inducted into the national Old-Growth Forest Network are chosen because they are excellent "representative" forests for their specific locale. Forests inducted into the nationwide Network have exceptional ecological integrity and are among the oldest known native forests in their county, the Old-Growth Forest Network website reads.

“There’s very few of these remnants left in the landscape and they really replicate a snapshot of what these forests look like when Ohio used to be the Northwest Territory and when it was first settled,” Brian McCarthy, a professor of environment and plant biology, said.

Dysart Woods is the only old-growth forest in Southeast Ohio, so it is the only place in the region where people can see what woods looked like up to 400 years ago.

“It’s within the last .004 percent of old growth forest of Ohio,” long-time activist and founder of Dysart Defenders Chad Kister said. “The trees there are just incredible. It’s beautiful. All the old trees – it’s breathtaking … Dysart Woods is what makes Ohio such an incredible place.”

A forest is a "collection of stands," meaning that it is a comprehensive community of trees uniform in composition, structure, age and size class distribution, spatial arrangement, site quality, condition, or location to distinguish it from adjacent communities.

“Trees come and go and stand changes over time but those are natural processes, so it really does sort of represent an interesting control in the landscape where it’s being managed all around it,” McCarthy said.

McCarthy studies dendrochronology, or the scientific technique of dating events and environmental change by using the characteristic patterns of annual growth rings in timber and tree trunks.

Through that, McCarthy studies the frequency of disturbances in the forest, such as blow-downs or fires, which show up in tree scars.

“I study tree cores and so I can kind of rebuild the history of sites,” McCarthy said. “You can really study the tree rings and understand what’s happened over the last 400 years.”

Because Dysart Woods serves as a control in the landscape, research has revealed the rich history of colonial times and how people have historically interacted with the land. 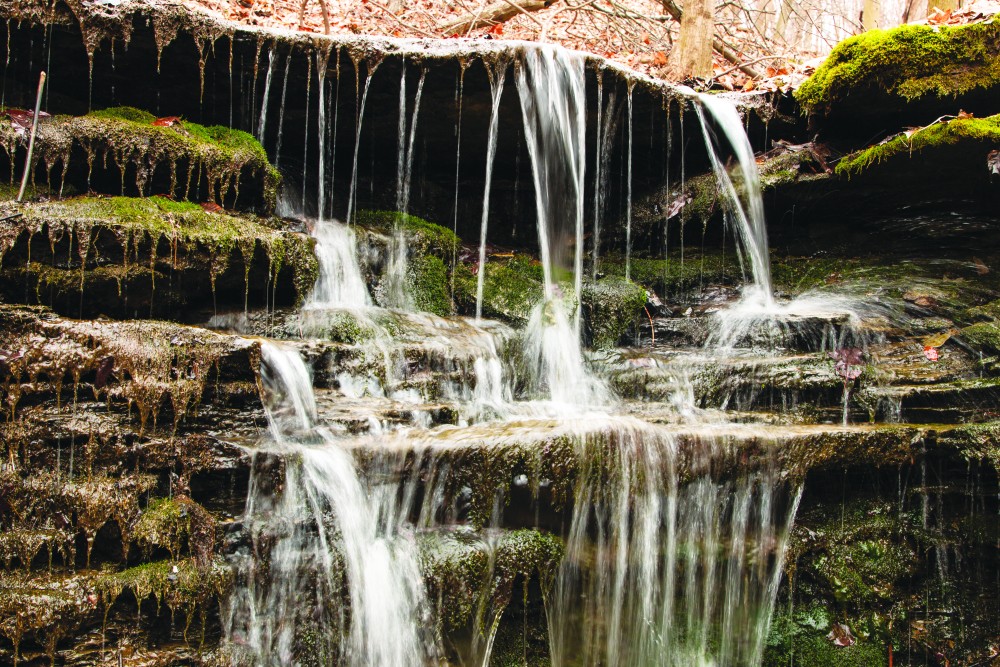 The Dysart Woods, located in Belmont, Ohio, is an old growth forest owned by Ohio University.

“We were able to discern that most of the fires that occurred followed Anglo settlement, so it was actually white settlers who originally cleared the land and plowed fields and built homesteads there that caused most of the fires in the landscape,” McCarthy said. “So this idea that Native Americans were burning the landscape constantly may not actually be true.”

There’s a lot of useful information that people can get out of the stand like that because people can only get information like that from trees that are three to 400 years old. Dysart Woods is a “very unusual niche in the natural world” because so few old-growth forests still exist in Southeast Ohio, McCarthy said.

The heritage of the woods is not only a point of interest for scientists because of the historical significance of the forest.

“It’s not what you normally experience,” McCarthy said. “This idea of national heritage is something that, in my mind, is sort of a connecting point for people who may not be scientists.”

Because Dysart Woods, located in Belmont, Ohio, is about 10 miles away from the Eastern Campus and about 2.5 hours away from the Athens Campus, students and faculty from multiple campuses are able to utilize the land.

“It provides a backdrop or a setting for students and faculty to do a wide-range of observations,” McCarthy said. “I’ve got a long-term study monitoring how the vegetation changes over time, and so there’s different people doing different things up there.”

In the early 1960s, The Nature Conservancy deeded the land to OU for $1 because it didn’t fit into the conservancy’s land-based strategy for the state of Ohio.

“At the time, Ohio University had been looking for a sort of land laboratory where we could do long-term experiments, long-term studies and have a place where we could take students on field trips, and this just kind of popped up all at the same time,” McCarthy said.

Since OU’s acquisition of the land, mining has taken place at Dysart Woods. In May 2004, the Ohio Valley Coal Company began mining coal north of Dysart Woods, according to a previous Post report.

“They did unfortunately put in a room-and-pillar mine,” Kister said. “If they did it right it won’t collapse for a few decades so they could backfill it, but if it collapses there could be major impacts.”

Room-and-pillar mining is supposed to hold up the land, however, since the mining began many of the old trees died.

“There wasn’t the political will to do anything about it because mining in that area is kind of a big deal,” McCarthy said.