Gabe Fisher, the sole chef at Purple Chopstix, didn’t exactly get an extended paternity leave when his wife, Aysha, had a baby.

“Even when I had my child, he really only got one night off,” Aysha, who runs the restaurant located at 371 Richland Ave. with Gabe, said. “She was born on a Friday night and so he took Saturday night off but he was back here on Wednesday.”

The restaurant is small but full of life with different local art, much of it made by Passion Works Studio, displayed in every corner. It opened in 1989 by Gabe’s father, Ed, who still owns the place. The restaurant is a popular staple in the town, and it stands out from other restaurants due to its eclectic design and friendly staff. However, even when all is running smoothly, if Gabe is sick or out of town, they have to close.

“There are parts of it that kind of suck,” Aysha said about the family-owned restaurant where she has worked since she was 15.

When a couple of people start a restaurant, they create a certain type of relationship with one another. That relationship can be further complicated when those two people are spouses.

“It’s challenging. … I think it’s good to have a core friendship first,” Aysha, who was childhood friends with Gabe, said. “He’s my best friend. Of course, at times, we can get on each other’s nerves, but communication is key.”

The lives of families who own restaurants are intertwined with the owners themselves and co-workers who come to feel like part of the family. Regardless of who’s in the kitchen, restaurants have one purpose: creating colorful dishes their customers can enjoy. 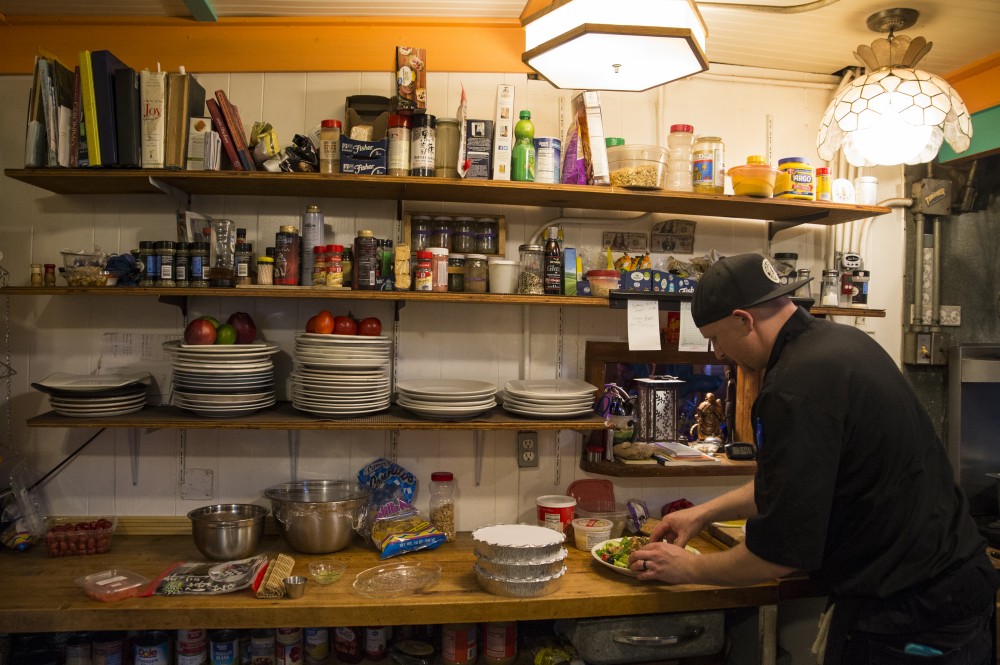 Gabe Fisher, the cook at Purple Chopstix, prepares a salad in the kitchen on March 30. 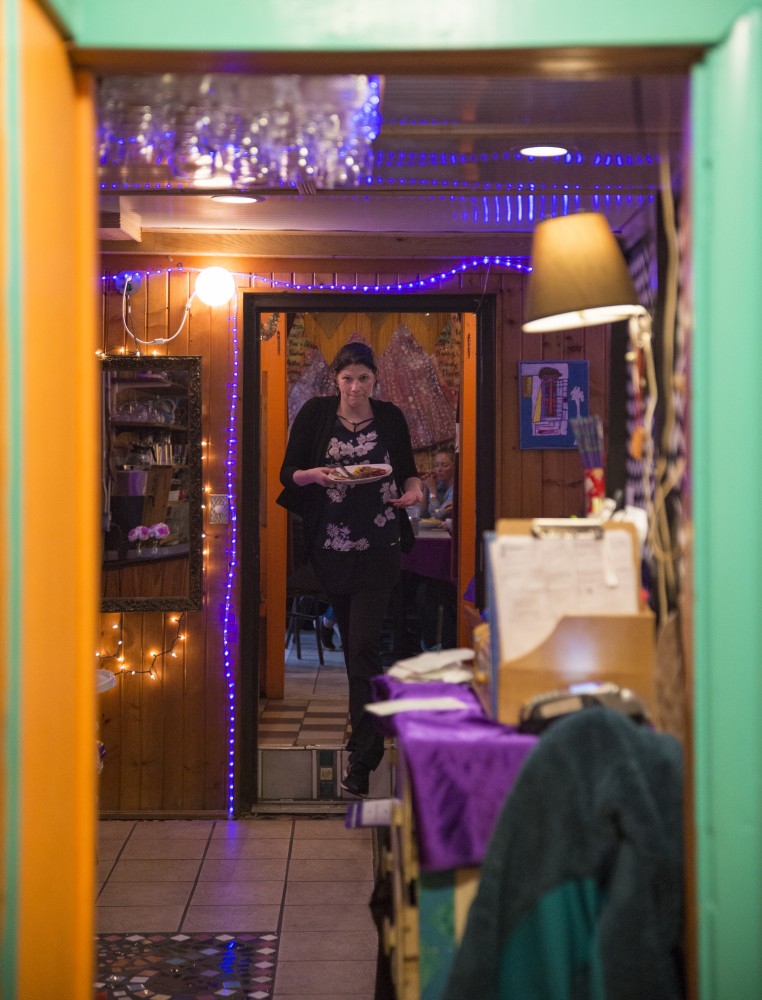 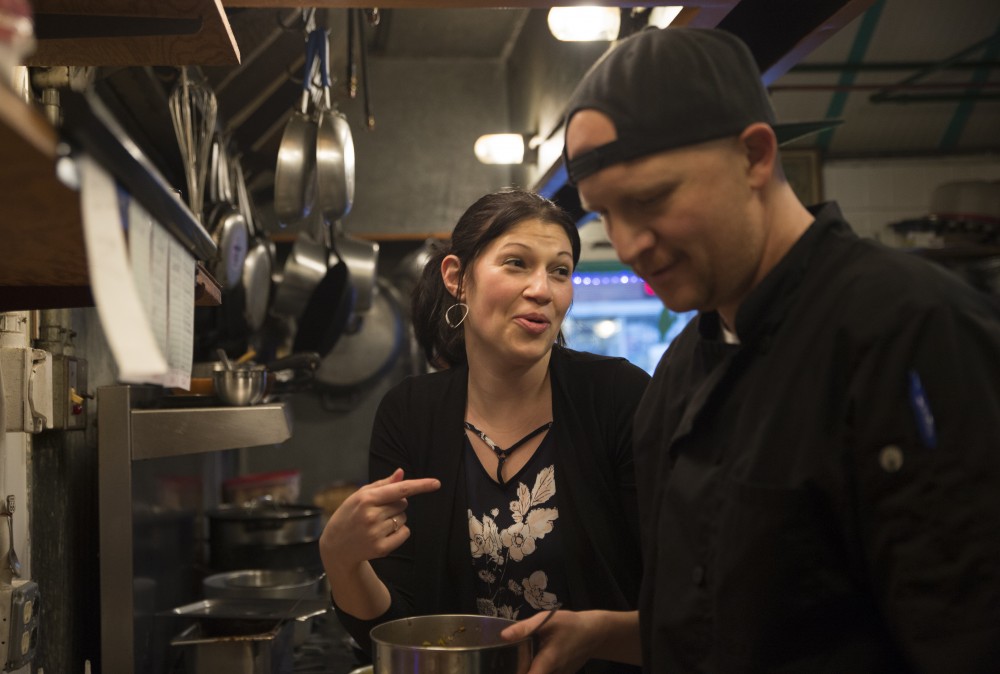 Aysha Fisher laughs at something her husband, Gabe Fisher, whispered to her in the kitchen of Purple Chopstix on March 30. 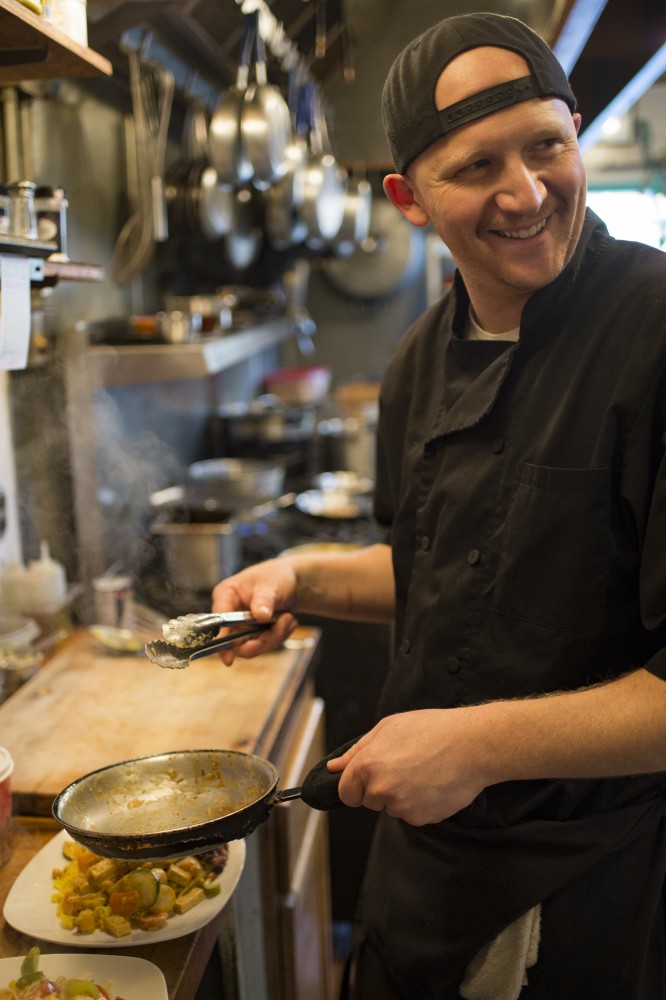 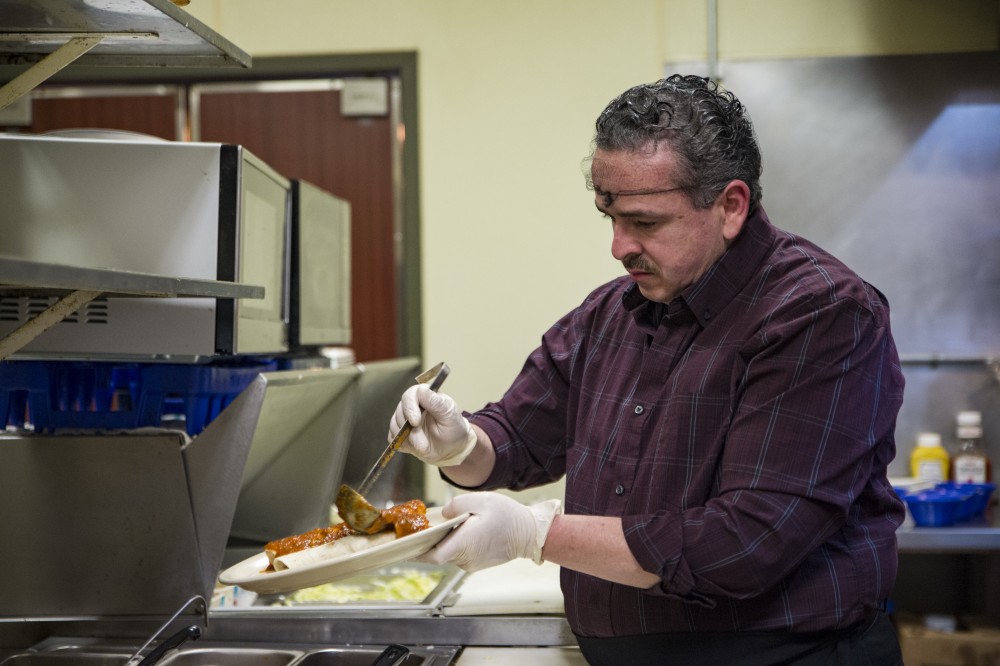 Juan Jose Lopez, the owner of El Camino, prepares a meal in the kitchen on April 5.

Lulu and Juan Jose Lopez know what it’s like to make sacrifices for their restaurant. The couple, who opened El Camino, 1017 E. State St., in 2015, work with their son, Joshua, and nephew Cesar Marquez. Lulu and Juan worked in restaurants for 26 years, including a few of their own, prior to opening El Camino. Lulu always has worked the floor as she enjoys interacting with customers, while Juan always has worked in the kitchen. It’s a lot of effort, and sometimes personal opinion can make their way into the professional workspace.

“Some days are good days, and other days there are situations,” Lulu said. “Working together is fine when we work like a team.”

Lulu and Juan hopes Joshua and Cesar will be able to learn everything about running the business and take it over one day. She loves being able to work with her son, because culturally, family is extremely important to Latinos.

“Everything we do is for our family,” Lulu said. “We want to be close to our son and daughter. … We may not be the perfect people or the perfect family or the perfect business, but we try to do the best with everything.”

Lulu added that it’s easy for them to get through rough patches because everyone at El Camino loves their jobs.

“It’s the reason I came here to the United States: the ‘work and thrive’ mentality,” Juan said. “So when I want to return to my country, my business can keep thriving with my nephew and my children.”

The commercial kitchen environment can get hectic, and the people working in those kitchens tend to develop close relationships due to the long hours and close proximities to one another. The kitchen at El Camino can sometimes feel like it’s going a thousand miles a minute — someone might be flipping two dozen tortillas and a few pounds of meat on the grill with their back to another person assembling multiple combo plates at once. It’s this close environment where Juan learned how to be a chef.

Juan and Lulu met and married in Mexico; at the time, he knew nothing about cooking. When he immigrated to the U.S. in 1991 with Lulu and got a job in a kitchen, he learned by watching the line cooks and chefs.

“I started working without knowing anything, completely nothing,” Juan said. “And six months later, I was head of the kitchen.”

The line cooks do their best to keep each dish consistent but are willing to customize meals for customers’ tastes. They have a huge menu, so it’s important for them to try to keep it all straight so the customers receive exactly what they order when their food is delivered to their table.

“In the kitchen, there has to be control,” Lulu said.

Juan’s favorite part of cooking is preparation. He is constantly mixing flavors to create something people cannot get anywhere else with authentic ingredients. Everything besides the tortillas at El Camino is made from scratch and is created in Juan’s mind through careful experimentation.

“I do not want to lose my recipes … and I like to try new things,” Juan said.

While Juan is constantly changing the menu at El Camino, sometimes every few months, the menu at Purple Chopstix has been almost the same since 1989 with a few tweaks along the way. Part of the reason why it hasn’t changed is because of how many regulars go to the restaurant.

Unlike large commercial restaurants, Purple Chopstix does all of its shopping locally and on a nearly day-to-day basis. The shelves in the surprisingly spacious kitchen are filled with Asian spices from Panda Market on East State Street and colorful jars of base ingredients bought at Kroger. The fridges are full of fresh produce, some of which is bought at the Athens Farmers Market when it’s in season.

Because those regular customers expect the same quality each time they come in, Gabe said it’s important for him to really focus on making each dish right.

“When you’ve got a bunch of tickets up and you’re in the weeds, you try to cook as fast as you can and maybe I’ll put something out and (Aysha) will let me know if it’s not right,” Gabe said. “We know our clientele. Some of them, we know what they’re going to order before they even come in.”

Jim Mason, a regular at Purple Chopstix, is one of those customers who has been going to the restaurant almost since it first opened.

“I’ve had the same thing probably 50 times,” Mason said about the Bolivian chicken. “They keep the menu so consistent that when you order, you know exactly what you’re going to get.”

Molly Gassaway has worked in many restaurants in the past, but she says none of them were like Purple Chopstix. She came into the restaurant for dinner one day, and Aysha convinced her to work for them part time. Aysha told Gassaway, who has now worked part time at the restaurant for four years, that it was different than any other restaurant, and Gassaway soon found out her friend was right.

“There’s only a few of us. We do it all. It’s a lot of organization and we have it down. … You learn by your mistakes and then you grow from it.”Aysha Fisher, owner of Purple Chopstix

“I had kids, and I stopped and I said I was never going to (work at a restaurant) again,” Gassaway said. “But then when I moved here, Aysha tricked me into working here.”

Gassaway, along with the other employees, understands the importance of multitasking. She simultaneously serves customers while prepping a dozen salads in the back during a busy dinner hour. The staff does what is necessary to make the dinners at Purple Chopstix run as smoothly as possible. No one knows that better than Aysha. Even though she doesn’t cook, she does basically everything else: scheduling, waitressing, managing, shopping, dishwashing and more. Her job is very social, and she gets to chat with customers while seating them. But when it’s needed, she and the other employees don’t shy away from rolling up their sleeves and clean pots and pans in the back.

“There’s only a few of us. We do it all,” Aysha said. “It’s a lot of organization and we have it down. … You learn by your mistakes and then you grow from it.”

Outside of the family members that operate those restaurants, there are other workers who make up the small staffs of the two businesses that end up becoming a part of the restaurant’s family.

“We end up developing bonds because it’s that small and intimate of a place,” Aysha said.

It’s the same story at El Camino. Juan feels like the people working in the kitchen are his family now because most of them have worked at his restaurant since it opened. When the workers come to El Camino, they know nothing about how to prepare the meals the restaurant serves. Juan teaches them everything about how to make the recipes correctly.

“Everyone comes together because we have so many hours and so many years together that, in the end, we are friends and we help each other and act like a family,” Juan said.

Lulu’s main focus is to make sure the customers are treated the way she wants to be treated in a restaurant. She loves being able to talk to the customers and make them feel welcome. There will never be a time that customers will walk into El Camino and won’t be greeted with a warm welcome of “hola” or “bienvenidos."

“We worry about our customers,” Lulu said. “We want to treat customers like family.”

Not only do the other workers at both these restaurants feel like family, but the customers do as well.

“Our customers are also kind of like our family at this point,” Aysha said. “There were regulars that were literally invited to our wedding.”

With the restaurant industry being so unpredictable, it’s hard to tell what will happen in the future. For El Camino, Lulu and Juan hope they can keep in the family, while Purple Chopstix wouldn’t mind expanding a bit to take a little off their plate. However, both establishments have one thing in common – their dedication to both their work and family, which often intertwine.

“We bring our daughter, Addison, in. … Last night she was even pushing a broom around — she’s only 1 1/2,” Gabe said. “Being a small family owned restaurant, I think it’s just really nice that if you work a lot, you spend a lot of time there so we get to spend a lot of time together.”