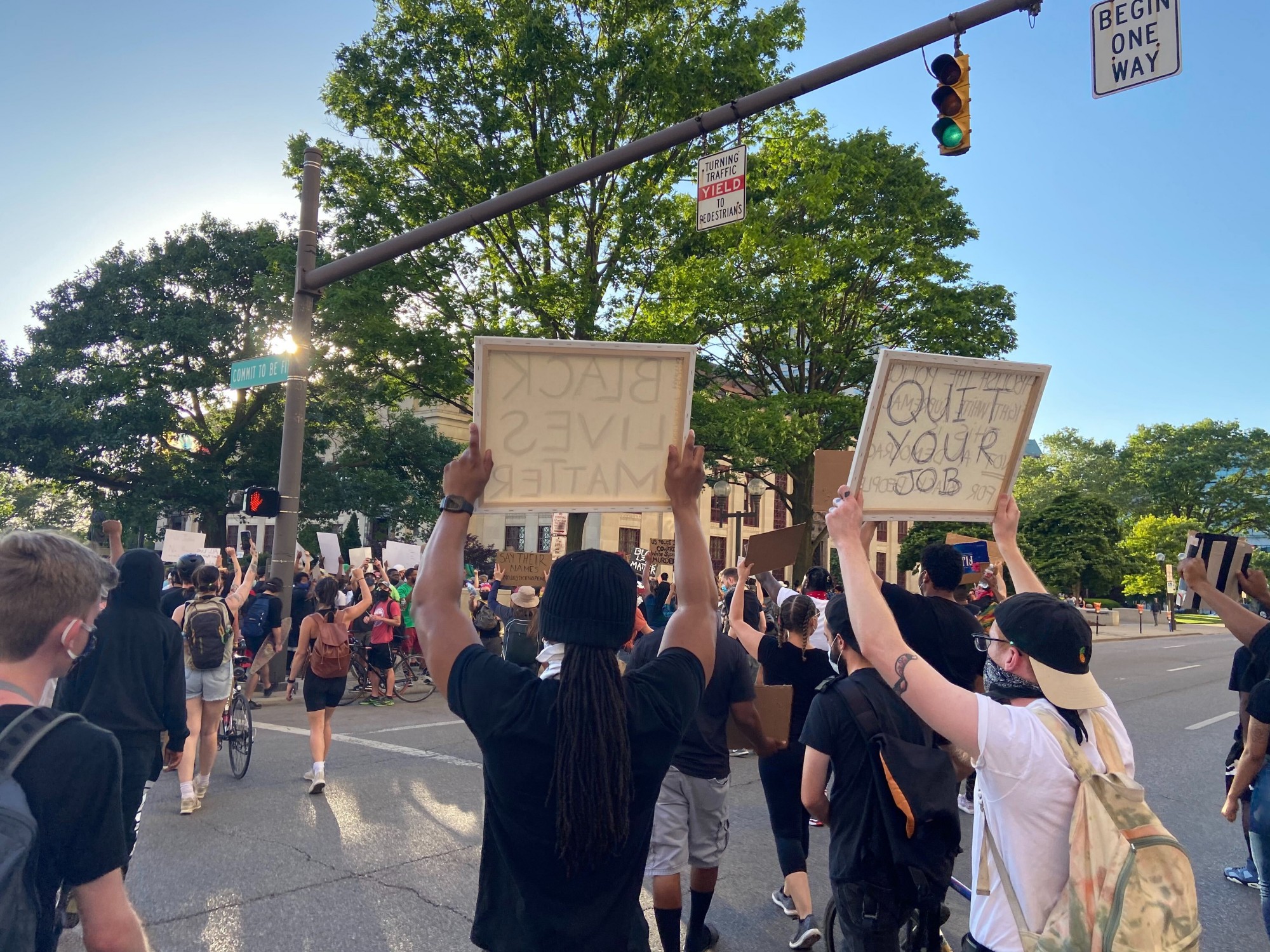 Protestors hold up signs while chanting and marching.

“I’m Tired of Being Scared”

All of the voices seemed to blend into one as individuals chanted and marched the streets of downtown Columbus in protest. The crowds consisted of people both young and old, both white and of color, a diverse convergence of different walks of life with a common goal: to demand justice for the black people killed in acts of police brutality.

The protests initially began in the Minneapolis area May 26, the day after George Floyd’s death by police, but the movement quickly spread across the country and even across the globe. On Tuesday, June 2, residents of central Ohio took to the streets for another powerful day of protests.

Protestors gathered early in the morning on the sidewalks and grass outside of the Ohio Statehouse, 1 Capitol Square, which houses the offices of both Ohio’s House of Representatives and Senate. Armed with masks and posters, protestors rallied around speakers who passionately expressed their dedication to the #BlackLivesMatter movement and the black community in general. 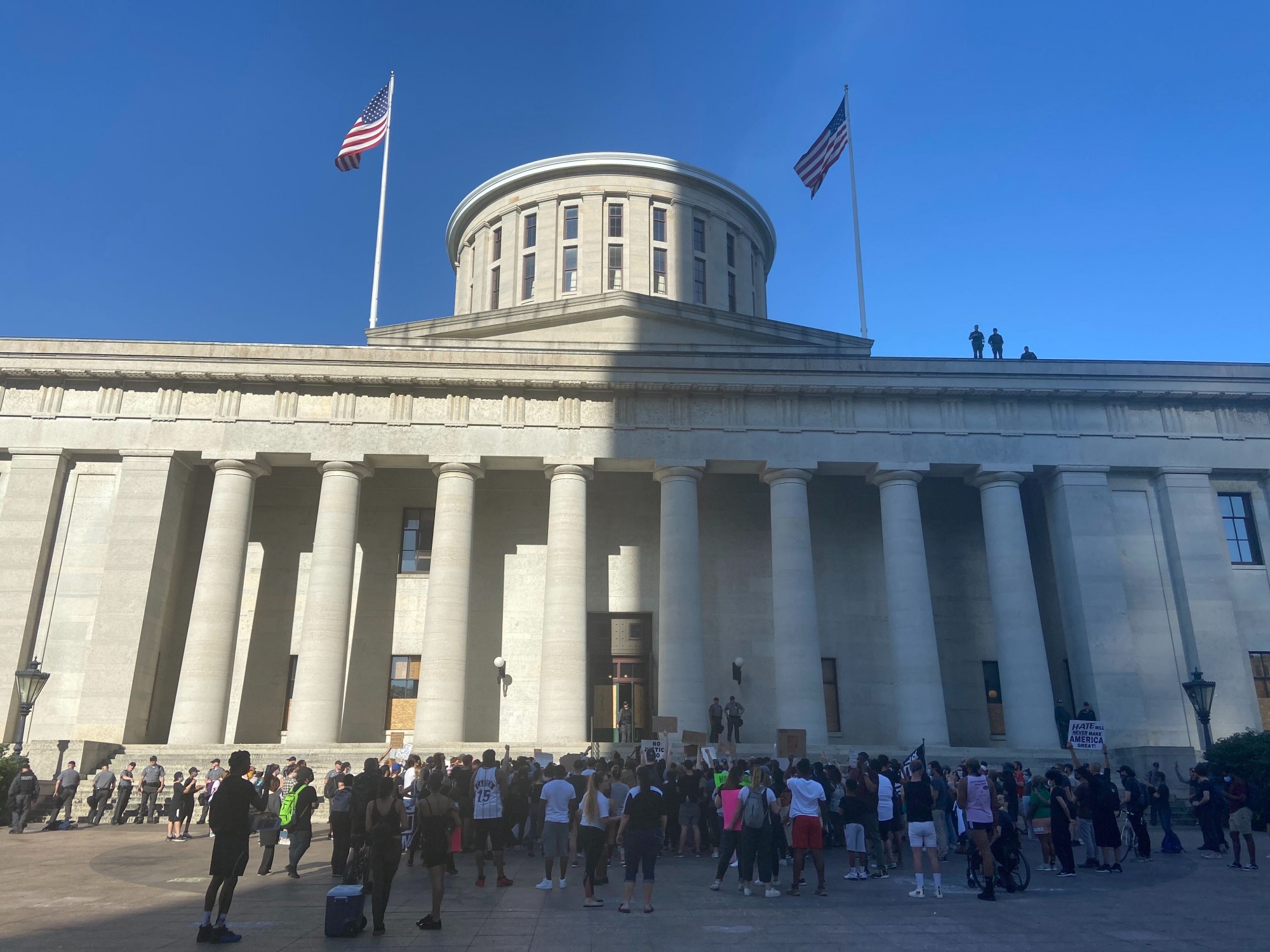 Protestors gather outside of the Ohio Statehouse.

Many told personal stories of their experiences with police brutality and white privilege, emotionally conveying how strongly racial issues have impacted their lives and the lives of those around them.

“‘He doesn’t want to get a job,’” one young man shouted into his microphone in a mocking tone as protestors roared in support. “‘He’s just lazy. He doesn’t have any aspirations.’ No! He’s afraid!”

Black men and women have been killed by the U.S. police force at a statistically higher rate for decades. 24% of those killed by police in 2019 were black, despite black people only making up 13% of the U.S. population, according to the Mapping Police Violence organization. Instances of this unfair violence against and targeting of black people, such as Floyd’s death and the recent death of Breonna Taylor, have been fiercely adding flame to the fire that is the rage against police brutality.

Tuesday was either the sixth or seventh day of protesting for countless individuals, so many returned with red medic crosses taped to their chests, backs and sleeves, toting massive bags filled with medical supplies, cases of water and food. These volunteers, like Columbus resident Joey Morris, set up shop wherever they could help protestors.

“I’ve been out here a couple hours,” Morris said as he handed out bottles of water from the 15 cases stacked behind him. “It means a lot to me. I lost a lot of friends these past few days. They’ve just been on the wrong page with all this stuff. But it’s worth it, though. I don’t like people that don’t like black people.”

Pat Costello, another person providing aid, has been on the scene since the protests began. He has been actively purchasing jugs of water to keep protestors hydrated and has given away over 30 gallons in about a week.

“There’s deep injustice rooted in this country, and we all have our own voice, and we must speak out against it,” Costello said as he hauled six jugs of water from his car to the Ohio Statehouse. “In this country, we arm every cop like a soldier … It is incredibly extreme in my opinion. They do not need to arm every cop in the way in which they have, and the majority of the time, with what I’ve seen firsthand and what I’ve seen secondhand, the police are starting the violence.” 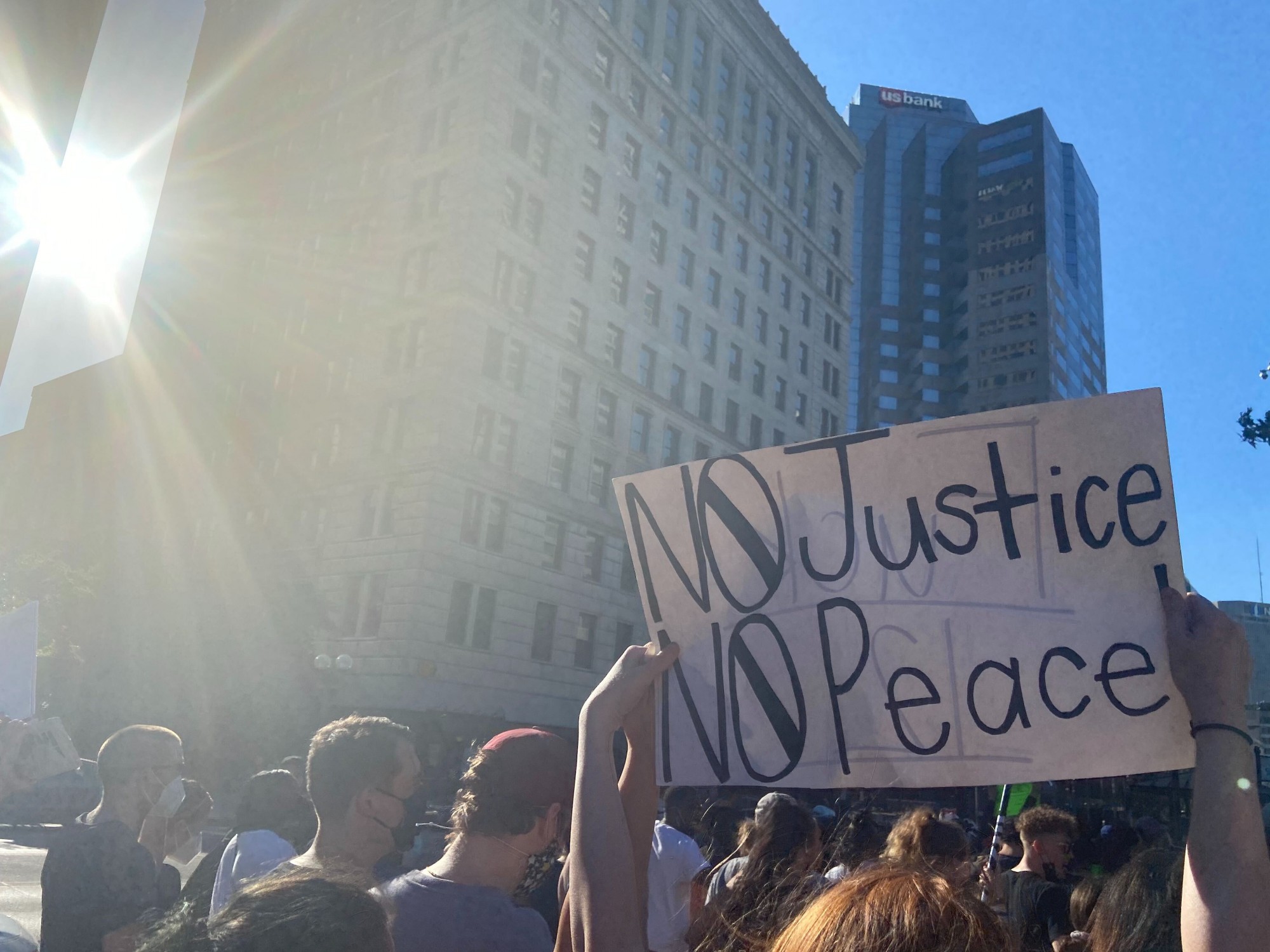 Protestors hold up a "No Justice, No Peace" sign while walking.

Costello is also one of the numerous people who have been wounded by police with tear gas and rubber bullets during the protests. He claimed that while rubber bullets are designed to be fired toward the ground so that they can ricochet up and wound ankles or legs in order to encourage the dispersing of crowds, police are instead shooting directly at targets in a point-blank range.

These increasing reports of violence against protestors, primarily caused by the police, have caused a few local businesses to open their doors to the public rather than board them up in order to prevent property damage.

The Garden, 1174 N. High St., is a female-owned adult boutique that has been converted into the largest and most visible medic and supply hub in Columbus. The Garden has been open to aid protestors since Saturday, offering bathrooms, hot food, a place to rest, water, supply bags with medical supplies and saline solution, medical aid, sunscreen and more.

Rain Musik, The Garden’s general manager, said the shop’s trained volunteer staff of paramedics and RNs has already handled close to 50 individuals for medical aid, ranging from tear gas and mace treatment to severe injuries. Musik said around 7 p.m., the air gets “staticky” as things shift and become more violent.

“Yesterday, it was so chill, all the way until actually past curfew,” Musik said, sitting out behind The Garden’s back door near their medical tent for a brief break from the organized packing and distribution of supplies inside the boutique. “People had gotten from the Statehouse all the way up to Lane (Avenue) … before there was any police interaction, and then it was unprovoked macing.”

Musik shined light on the fact that allies in the streets are extremely important to this protest not just to provide aid, but to protect black bodies with white ones. All hands must be on deck in order to make the movement effective.

Students seemed to make up a large majority of the protestors, eager to make their voices heard and push for equality between all people. Elijah Crafter, a recent Ohio State University graduate, said police pepper-sprayed students peacefully protesting at OSU on Monday night.

“It’s crazy how 2020 has been, and this is going to be written in the history books for a time to come,” Crafter said while standing on the green in front of the Ohio Statehouse. “This is the time, right now, to take a stand and to make sure that they can’t turn their backs away. We’ve got the whole world watching. The whole world is literally with us.”

Crafter has mixed feelings on the controversial looting of businesses by protestors. While it may not be a peaceful protest, he believes it is a legitimate way for others to protest because it hits companies where it hurts.

“These organizations and these corporations are out here talking about, ‘Yes, we agree black lives matter,’ but where were they before George Floyd died? Where were they before their pockets were about to get hit? They were nowhere to be seen.”-Elijah Crafter, a student protestor

The parallels between the protests going on today and the ones in the 1960s show a pattern of brutality against black bodies resulting in protests and rioting. According to the Bullock Museum, Martin Luther King Jr. was assassinated because of the movement he guided. Following his assassination, there were riots across 100 cities in America, which forced President Lyndon Johnson into putting pressure on Congress to pass more Civil Rights legislation targeting racially-based housing patterns that remained in place.

“These organizations and these corporations are out here talking about, ‘Yes, we agree black lives matter,’” Crafter said, providing an alternative perspective in support of looters. “But where were they before George Floyd died? Where were they before their pockets were about to get hit? They were nowhere to be seen.”

Laki Mahamud, Crafter’s friend and fellow protestor, also spoke up on the violence against people of color. She said she is fighting for all of the people who have intersectionalities that make them unable to speak up.

The march spread from the Ohio Statehouse to both the downtown police department and the sheriff’s office. Police officers attempted to speak to protestors outside of the sheriff’s office, but the crowd quickly rose in an uproar, chanting “Get the chief,” and booing him offstage. 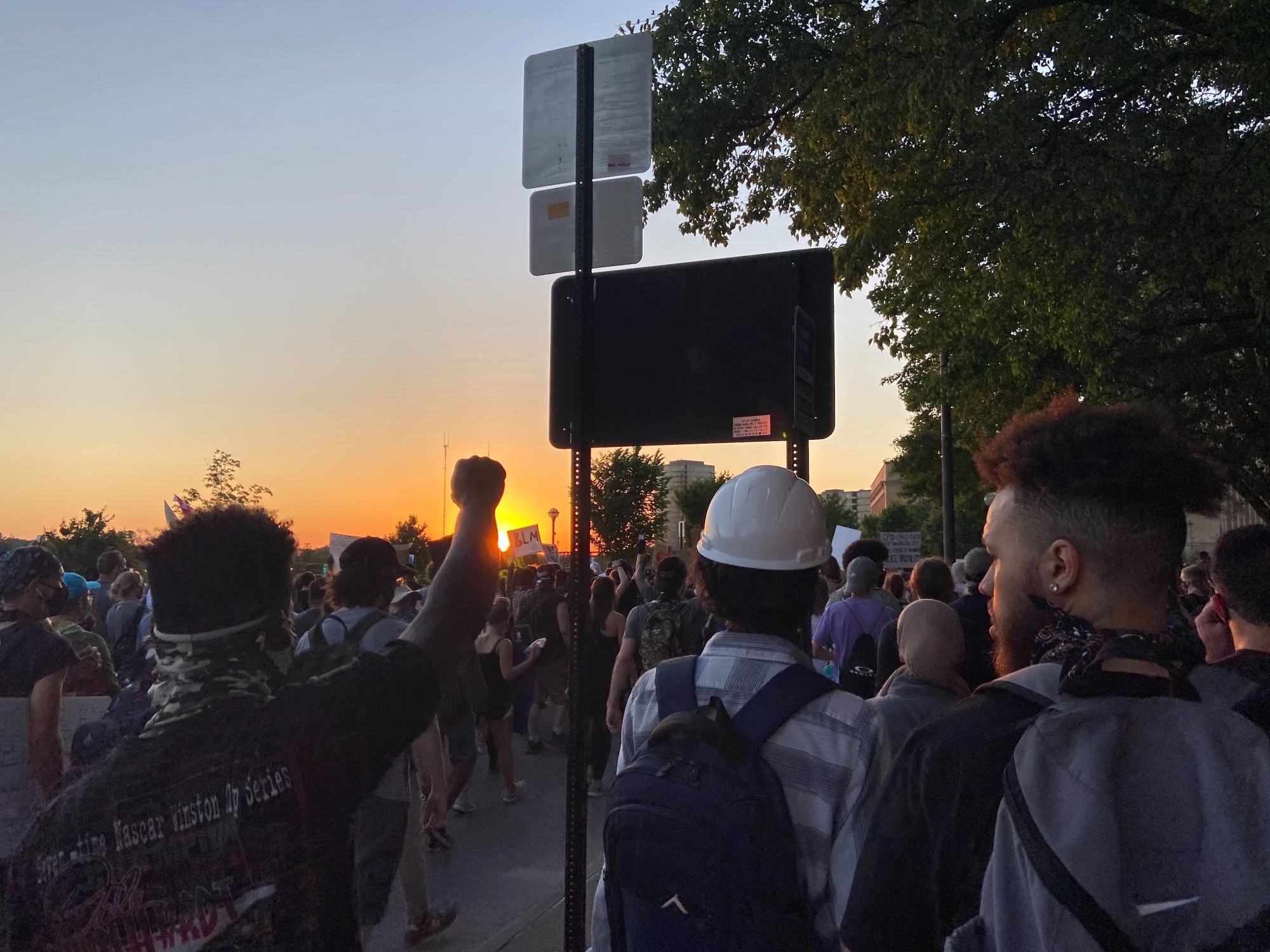 People continue to protest as the sun goes down.

By the time the sun had set, the main streets in downtown Columbus were blocked off by police cars and military vehicles as two police helicopters flew overhead to track the marchers. National guardsmen were stationed on top of buildings and in the streets while police took over a downtown parking garage to prepare their riot gear, shields and helmets.

However, most of the preparation for a riot was put to little use, as protestors maintained their goal of a peaceful protest. A number of individuals at the protest weren’t even protesting and were instead ‘legal observing’ to document everything happening at the marches, including possible brutality or racism.

Dani Howell, a Columbus resident who was protesting for a second day Tuesday, said she even has seen police attack the legal observers.

“With the legal observing, they’re not protesting,” Howell said. “They’re literally there just to write things down and kind of, like, see what’s going on. It’s an unbiased deal. They’re all marked with bright green hats, and (the police) have actually been chasing them down and pepper-spraying them.”

Ariana Ybarra, a central and southern NARAL Pro-Choice Ohio organizer, said this negative reaction to protestors has an even more drastic effect than many realize. For veterans or immigrants who have emigrated from occupied nations, seeing things like tanks rolling by their apartment windows can be incredibly triggering.

Ybarra also said this kind of police response to protestors is incredibly common and that it isn’t just a Columbus problem. One of her interns, a student at OSU, was pepper-sprayed while displaying identification of her media status to the police. She believes this is a form of censorship of the media, and she is incredibly concerned. 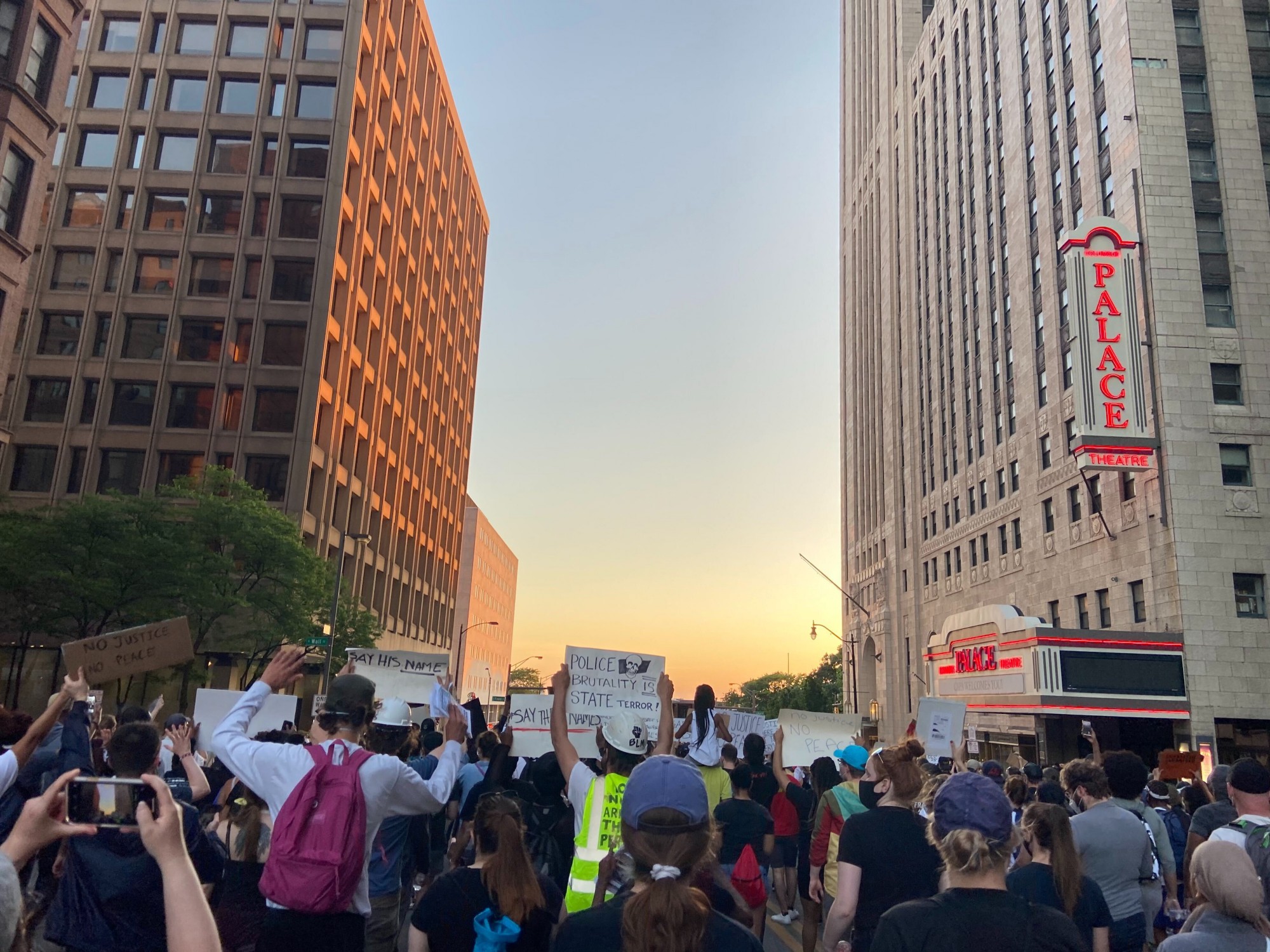 Protestors continue to walk as the curfew creeps up on them.

“I have a friend who is a trusted organizer, and she is a quadraplegic, so she is bound to a wheelchair,” Ybarra said. “She posted on her social media … (that) she got hit with rubber bullets multiple times, and a tear gas canister got stuck to her wheelchair and almost burned her leg. Another one of our friends, when the chief of police was out here yesterday, asked him why the curfew was at 10 if they were assaulting people at 8, and he said, ‘We have our reasons for what we do.’”

Protestors continued to march into the night and past the 10 p.m. curfew, heading north as far as Clintonville. Together, they chanted the names of black men and women who have been brutally killed by American law enforcement, fighting to ensure that the names were heard and never forgotten.

“We need to love each other!” a black man screamed into one of the microphones set up outside of the Statehouse, his voice shaking from the sheer emotion. “Any type of hatred –– we’re not taking it anymore! Everybody is here for the same reason. We’re here for the unnamed people that died.” 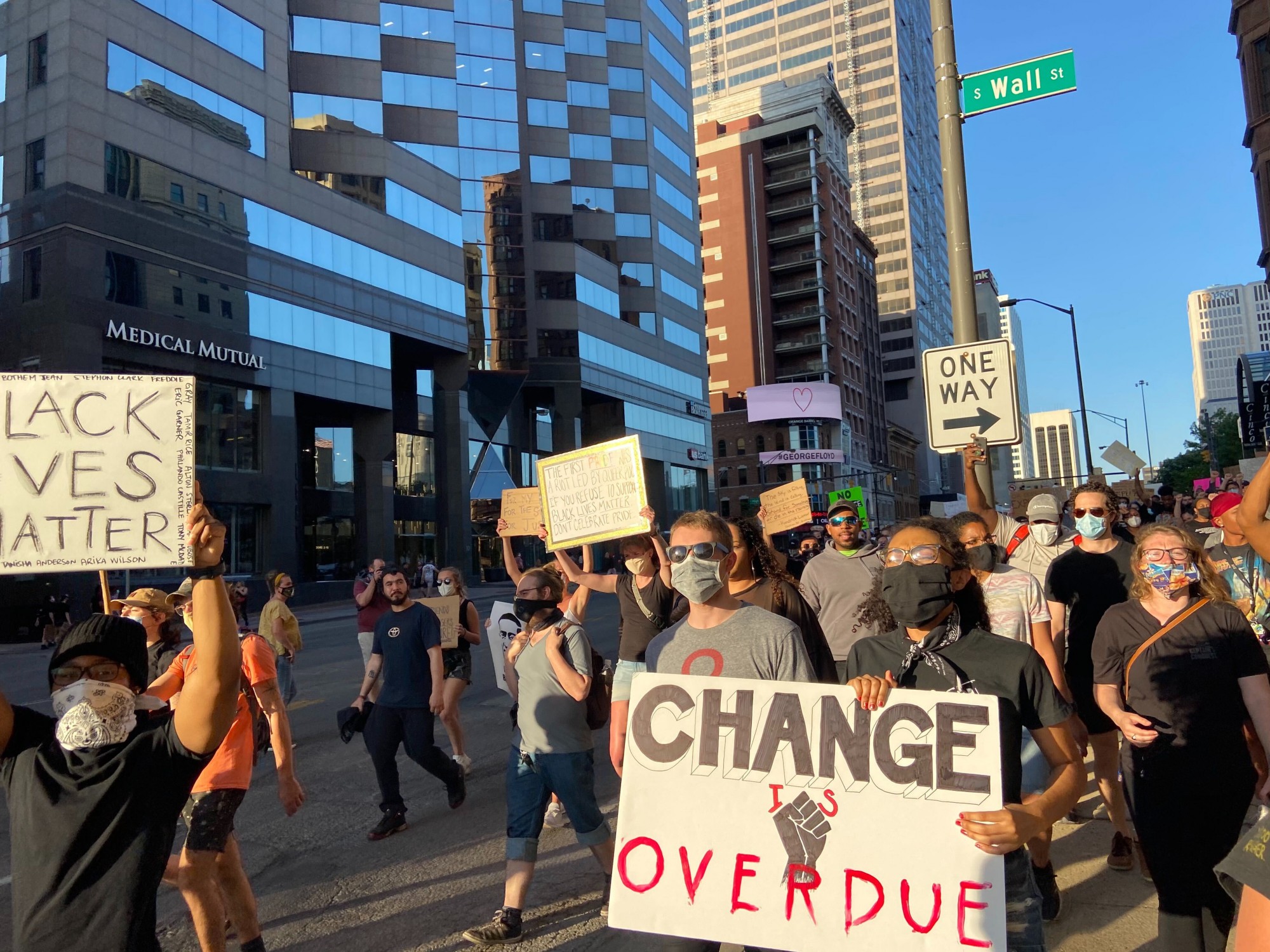