Racing For Their Roots

T he sight of the dirt in the air, the smell of the two-stroke oil and the roaring sound of the motorcycle and all-terrain vehicle engines are typical sensations for the racers.

Wildwood Lake Raceway, located a half-hour drive southeast of Athens in Little Hocking, is a home for motocross racers of all ages and all levels of skill.

Owner and racer Brent Windland opened the raceway for just a few events, and from there, it grew into a full-time center for racers with multiple events throughout each year.

“People need to come and watch this,” Windland said. “It’s one of the coolest things you could ever see.”

“It’s been like an addiction. We go out and beat our bodies so bad we can’t even walk. Monday we don’t even think about it [racing] again. Tuesday we start to feel better, and Wednesday we’re asking where the next race is.”-Brent Windland, owner of Wildwood Lake Raceway

Wildwood Lake not only has regular motocross tracks for adults and youth, but also an off-road track for racers to explore. Each year, the raceway hosts races, and its competitors travel to other races around the country.

Building the raceway to where it is now hasn’t been an easy road, Windland said, but it has been one full of support and unique opportunities for the racers.

“They’re incredible athletes, unbelievably fit,” Windland said. “People don’t know much about offroad yet, but we’re lucky to be a part of it so early on.”

From Grand Prix to Tennessee

Wildwood Lake is what’s known as an outlaw series, so racers don’t have to pay for any outside memberships to be able to participate. Anyone who owns a bike or protective gear can show up at the track and race.

The racers are split into three age groups: micro, youth and regular adult. From there, the staff split them into their particular sessions and classes.

There are different sessions based on age. In each session, there are individual classes that kids and adults sign up for based on experience or bike size.

Everyone gets two scores during the races: their class score and an overall session score. Scores are based on how they perform. 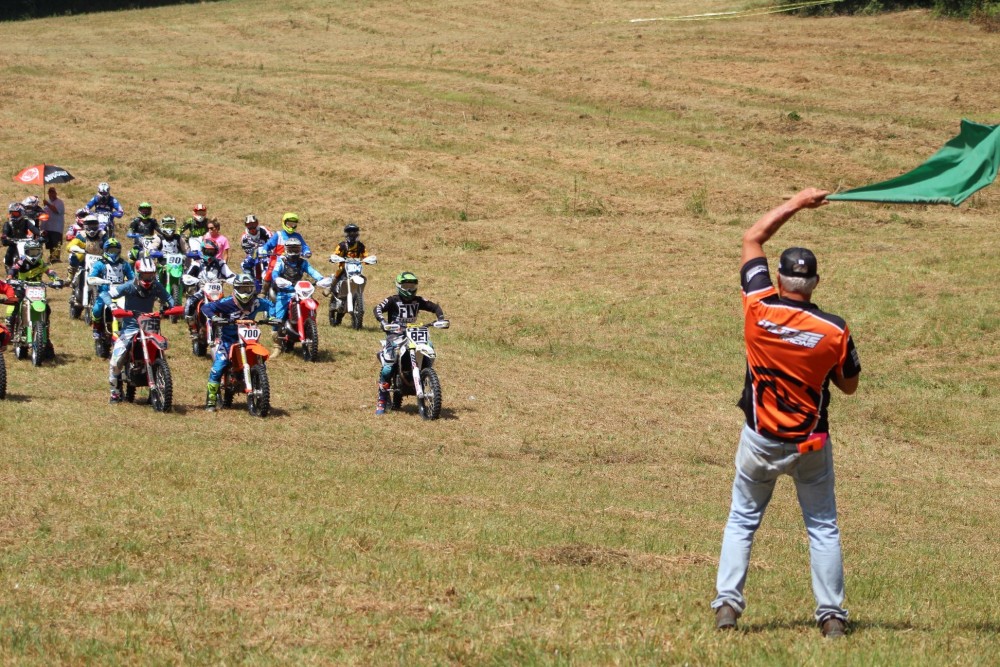 The normal registration fee is $25 for their first race and $20 for their second race in a day. The younger racers are charged $20 per class in a day.

Wildwood also offers a professional class for adults for $30. Depending on how many people sign up for the class, the staff takes the money and splits it up between the first-, second- and third-place racers in the pro class.

Paige Griffith, a staff member at Wildwood Lake, assists the raceway across the board, but she mainly focuses on social media, the scoring during the races and setting up the class system.

“We’re not a national group, so the pros coming with us and the people racing for years have great experience and skill, but with us they need their own special class to compete against each other because of their experience,” Griffith said. “Our way of helping those guys out is by giving it (money) back.”

Windland wants everyone to know racing is an extreme sport, and he makes a point to warn people when they sign up. After one race in Pennsylvania in 2002, Windland lost nine pounds in three hours and 20 minutes. Though Windland believes it is an enjoyable sport for the racers, there’s no doubt that it requires intense endurance.

“I tell the parents when they come out with new riders: this is not a sport where they’re not going to get hurt,” Windland said. “There’s no way around it. Broken bones just happen, but they heal and people get back on with the race.”

The race is in the roots

Windland moved to Florida, but he came back to his family’s farm when his parents died. He decided to build a practice course to keep his racing edge but knew the family farm could be so much more. He started hosting some racing events, and from there, it took off.

Wildwood Lake isn’t the only part of Windland’s racing story that has deep roots. His racing roots go back to when he was 8 years old. When his brother wanted to ride a motorcycle and wasn’t able to ride it after they picked the vehicle up, Windland hopped on and rode until it was out of gas.

A year later, he signed up for a race and ended up in fourth place at the ripe age of 9 years old.

Racing quickly became Windland’s whole life. He moved to Florida at the age of 20 and continued to race. Even after all of the injuries and bang-ups, he not only still races, but uses his knowledge of racing to promote through Wildwood Lake.

“It’s been like an addiction,” Windland said. “We go out and beat our bodies so bad we can’t even walk. Monday we don’t even think about it (racing) again. Tuesday we start to feel better, and Wednesday we’re asking where the next race is.”

Even Windland’s staff, who he says are wonderful and always completely involved, have been with him for a long time. Griffith grew up knowing Windland through her mom, and started helping out at the raceway and eventually became fully invested in it.

Griffith’s racing background isn’t just with Windland. Her dad and uncle introduced her to motocross and taught her how to ride. After she participated in her first race, Griffith knew she wanted to keep racing. Nearly 15 years later, she still races.

“At each event you meet more and more people and you learn about different types and different venues, and we’ve made so many friends that are more like family at the racetrack,” Griffith said. “It’s an amazing atmosphere; it’s just unreal.”

“As soon as the race is over, they’re out having fun and playing together. Then, when it’s time to race they put their gear on and get to the starting line and wish each other good luck. It’s really cool.”-Brent Windland, owner of Wildwood Lake Raceway

The racers know that with such an extreme sport comes a huge time commitment, but that’s no problem for Landon Yoak, a senior at Washington County Career Center. Yoak started drag racing with Griffith when he was young before racing on the woods course at Wildwood Lake He is now racing in the pro-class at Wildwood Lake.

What he loves about racing isn’t so much the competitive nature, but the friendships and connections created with all of the racers and spectators.

“Racing has changed my life by taking me to new places all across the U.S., helping my mental health through strategy and patience and by making me push myself in the gym and at practice,” Yoak said.

Jared Stark is another racer with deep roots, having grown up around the sport. He’s owned a motorcycle since he was young, but he didn’t start racing until he was 18. He swept the track for Windland for two years, and now he’s a race flagger and assists Griffith with scoring.

Stark loves nothing more than to help people on or off the track.

“I have always been the type that would help anyone out if I could, and be able to help kids that need it out on the track,” Stark said. “They come back to you, and give you a hug just because you helped them up a hill or help start there bike back up; it just makes my day.”

Stark also believes the camaraderie plays a crucial role in the enjoyment of the sport.

“I would have to say what I love the most about racing is how it brings everyone together as a family even though you may only see them at the track,” Stark said. “You can ask anybody at the track for any help, and they would do anything they can for you, even lending their own bike to you so that you can make the race.”

Stark and the others agree that most every aspect of their lives has heavy roots in racing, but also that fact rings true for a lot of the racers. This is why they believe racing is such a family-oriented sport.

Windland, Griffith, Yoak and Stark all agree that the best part about racing is the bonds made with the people they meet. Windland loves being around all of the people who participate, be it staff members, the professional riders or other riders. When they all get together, Windland says it’s like a homecoming. 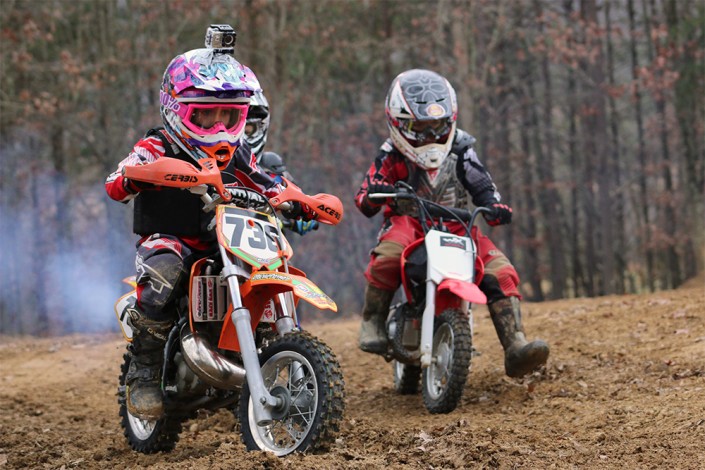 Though every sport consists of competition, Windland believes racing differs from the stereotype of rivalry. He loves how all of the racers are best friends and even act as a family.

He sees this familial bond between racers in the adults and professionals alike but added it all starts with the younger racers.

“As soon as the race is over, they’re out having fun and playing together,” Windland said. “Then, when it’s time to race, they put their gear on and get to the starting line and wish each other good luck. It’s really cool.”

More women are starting to participate in motocross, and Windland also loves to see whole families who ride together. He loves to watch his youth riders go through the class ranks, going from not knowing how to ride a bike to reaching the professional tracks.

It’s the family aspect that assures Windland he made the right choice when he pursued racing. After 52 years of racing, Windland is still just as excited as he was on day one to race and to share his knowledge with those around him.

“I’ve watched some of these children grow up racing and then come back with their kids,” Windland said. “It’s a really cool job. I get to be around a lot of happy people and people who enjoy racing as much as I do, and it’s wonderful.”