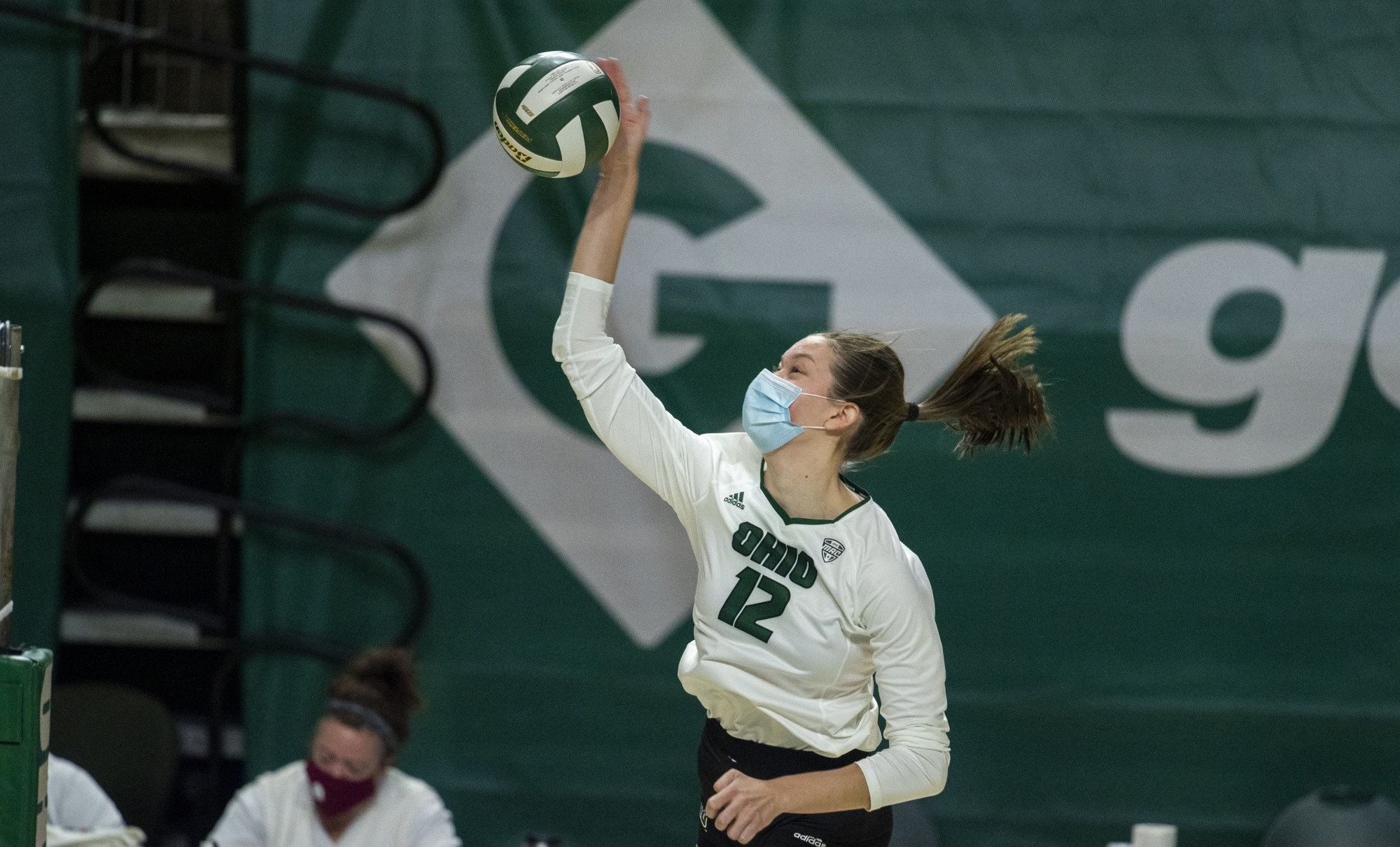 Redshirt freshman, Caitlin O'Farrell (12), hits the ball during the Bobcats first home game on Friday, Jan. 22, 2021. The game was postponed to Saturday due to a county wide blackout.

A fter an impressive but unusual season, Ohio is looking to grow and build on its success.

Despite postponements, cancelations, injuries and more, the Bobcats finished the 2020-2021 season 12-8, making their winning percentage .600 and marking their best season in the Mid-American Conference since they went 13-3 against conference opponents in 2015. The Bobcats also finished the regular season as the third best team in the MAC, securing a spot in the four-team conference tournament.

The Bobcats had to face some tough teams this past season, including Western Michigan, Miami and Bowling Green, which finished 22-2 last season and won the MAC championship. Much like this year, the competition in the MAC next season will be fierce, and the road to the MAC tournament will not be easy. In order to keep up with its MAC opponents in the upcoming season, Ohio will have to focus on a few key tactics.

Ohio’s communication on and even off the court is vital to its success. Ohio has to be able to work together and get along as a team in order to be able to match up against any adversary. Without good communication, the team could crumble. Communication is the glue that keeps it together.

Keep up the Intensity

For any team, it is almost inevitable to get behind at some point in a match. When this happens, Ohio must keep its head up and not lose its intensity. This has been proven to help it win matches. On March 16, the Bobcats fell behind 0-2 in their match against Kent State. Instead of getting down on themselves, the Bobcats only increased their energy and fought back, winning the match 3-2 and pulling off one of the greatest comebacks in program history. If Ohio can maintain its intensity throughout a difficult match and pull off more turn-around wins next season, it may make a big difference in its record, as well as its overall confidence. After beating Kent State, the Bobcats went on to achieve a three-match win streak.

Last season, Ohio dealt with a handful of injuries to its front row. Outside hitter Lauren Park missed the final seven matches of the season after sustaining a leg injury on March 16 at Kent State. Just one day later on March 17, opposite hitter Maggie Nedoma injured herself at home versus Toledo. Up until that point, Park and Nedoma had both played a big part in the Bobcats offense, combining for 296 kills. Another of Ohio’s power hitters, Tia Jimerson, sat out in a boot during Ohio’s series against Buffalo in February. Although these injuries did not hurt the Bobcats too badly in the spring as they won six of their last seven matches, there may not be such luck next season, especially if other teams are fully healthy.

Power at the Net

One of the main things that fueled Ohio in its journey to the MAC tournament during the 2020-2021 season was the amount of skill and power that it had above the 10-foot line. Ohio has many offensive stars, including All-MAC First Team middle blocker Tia Jimerson and All-MAC Second Team outside hitter Lauren Park. Jimerson led the team with 215 total kills last season. In her shortened season, Park had 189. Ohio also has rising stars Caitlin O’Farrell, Mariana Rodrigues and Elizabeth Hoerlein on its side. If Ohio can continue to grow the skill of these players plus foster the skills of its already big names, the offense could be unstoppable.

In addition, Ohio’s defense at the net also plays a big factor when competing against other MAC opponents. Teams like Western Michigan and Bowling Green have some strong hitters, and getting touches on the ball at the net slows some of those hard-to-dig kills down. While a block would be most effective, even just a hand on the ball makes it easier to be returned and the point to be earned. Every touch at the net counts.