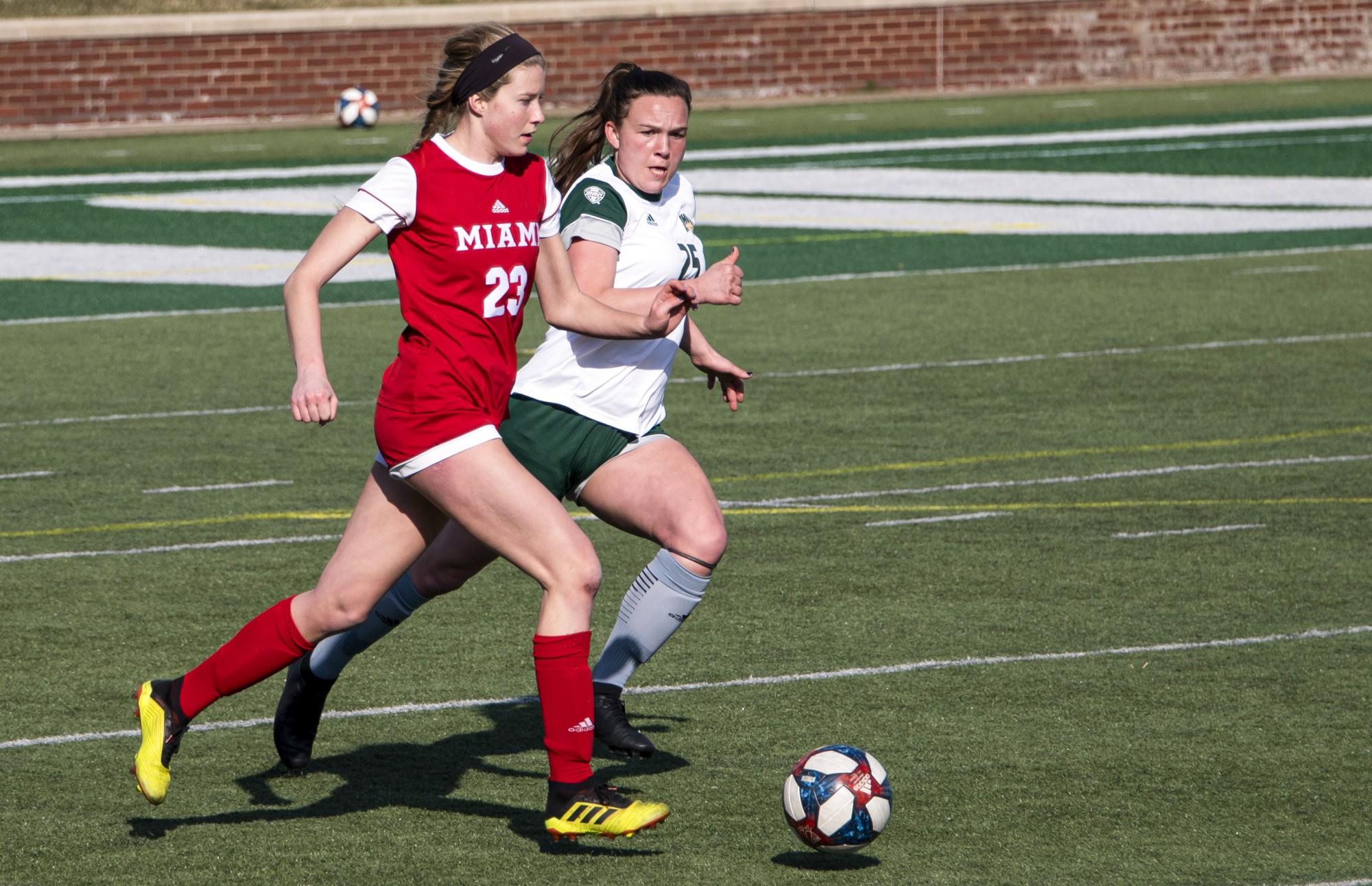 Izzi Boyd (#25) races for possession of the ball during the Ohio University home game at Peden Stadium in Athens, Ohio, on March 4, 2021. The Bobcats lost to the Redhawks 0-1. (FILE)

W omen’s soccer is one of the most consistently competitive sports at Ohio University.

Since head coach Aaron Rodgers was hired in 2012, the team has seen consistent improvement, and despite a tough 2020-21 season, that should continue next year.

Prior to this past season, which was shortened and played in the spring due to the COVID-19 pandemic, the Bobcats had qualified for the Mid-American Conference tournament in three consecutive seasons and made it the semifinals in each of the previous two.

Back in 2018, Ohio had its first winning season since 2009 and in 2019, the team won 10 or more matches for the first time in well over a decade. Rodgers has turned the program around and has made it into a program to be reckoned within the MAC.

The Bobcats went just 3-7 in the shortened 2021 season, but there are plenty of reasons for optimism as they head back into a regularly scheduled season.

Rodgers has consistently shown the ability to bring high-level talent to the program and that was no different this past season, with freshmen Isabella Ginocchi, Shae Robertson and Carsyn Prigge playing major roles in their first year with the program. Those three also were named to the All-MAC Freshman team for the 2021 season.

However, the main reason that the Bobcats should be better next season is that they have an outstanding group of seniors. Multiple players who would have left after this past season have elected to use their extra year of eligibility due to the pandemic to return for another season.

In addition, two of Ohio’s best players will be seniors next year, Abby Townsend and Olivia Sensky. With an experienced roster and plenty of young talent, Ohio is primed for another good season next year.

As fans are increasingly being allowed to attend sporting events again, there will likely be plenty of opportunities to watch sports at OU next year, but watching a soccer match should be on everyone’s to-do list.

The team does not have a large stadium, but the fans who come to the matches create a great atmosphere and there is always a good energy around the team, no matter what is happening on the field.

However, there are also some on-the-field reasons to come and see the Bobcats play. Ohio often plays exciting soccer, it is extremely fun to watch and it has some excellent players as well.

Townsend is one of the most electrifying players in the MAC, and her combination of speed and skill regularly leaves opposing defenders in the dust. Every time Ohio takes the field, Townsend is likely to do something spectacular, and that is enough a reason to watch.

The Bobcats are primed for another exciting season, and with more fans likely to be in the stands, everyone should try to come and see a soccer match next fall.