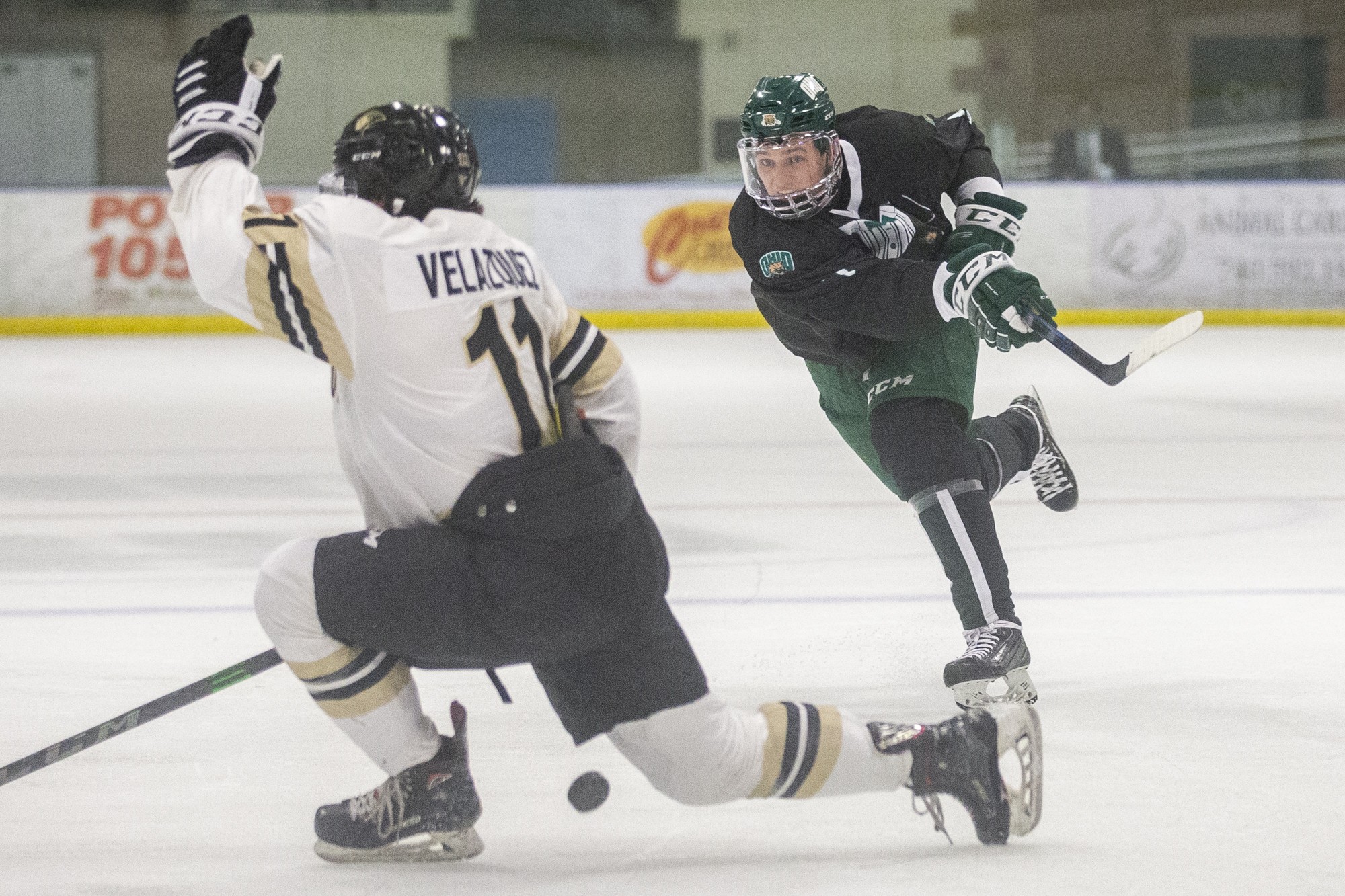 Ohio defenseman Blake Rossi (#7) fires a shot on net during the Ohio hockey game against Lindenwood on Friday, March 12, 2021, at the Bird Arena in Athens, Ohio. The Bobcats beat the Lions 3-0. (FILE)

Hockey: A reflection on 2021 and a look ahead for Ohio

2021 was a complicated season for Ohio.

It was like that before it even started when the Bobcats had to delay their 2020-21 season due to the COVID-19 pandemic. When Ohio’s season finally began in January, it would be far from smooth sailing.

Prior to impromptu scheduling changes, Ohio’s only regular season opponents were Lindenwood, Liberty and Adrian. Games against Robert Morris and Mercyhurst were added in the middle of the season. The Bobcats were fighting an uphill battle from minute one. Four of their five opponents finished in the top five of the American Collegiate Hockey Association rankings. Adrian finished the season as national champions.

Despite the rocky road and the final 5-15 record, it might be unfair to call Ohio’s season unsuccessful. Four of its five wins were against top 10 teams including the victory over Iowa State in the Central States Collegiate Hockey League tournament. The Bobcats also defeated Missouri State in the playoffs before falling to Liberty in the second round.

So, what went right and what went wrong for Ohio this season? The Post beat writers Eli Feazell and Zach Zimmerman reflect on how the season went down.

Ohio coach Cole Bell wanted his team to be challenged by the tough schedule, and the Bobcats are now well-conditioned for the future. When Ohio went up against Mercyhurst, a team less daunting than its usual opponents, the Bobcats won in crushing fashion 11-0. Ohio still needs to improve to beat the best teams in the nation on a consistent basis, but it might roll past many of its other opponents in the next season.

Bell must also be encouraged by some of his underclassmen’s performances. Ohio will lose crucial veteran players such as Kyle Craddick, Shawn Baird and Timmy Thurnau next season, but there is a wide talent pool ready to take the reins.

While Craddick won’t be there next season, Drew Magyar, Aiden Grieco and J.T. Schimizzi will be there in his stead. The three combined for 22 goals in 2021, with Magyar putting up 12 by himself. Combining them with other returning offensive talents such as Andrew Sacca and Ryan Higgins is key to Ohio’s success next year.

Ohio’s game was centered around strong defensive play and maintaining a low-scoring game. The Bobcats need to score more goals moving forward, which is entirely possible with a young, talented offensive core. There have been flashes of what they can do, such as the game against Mercyhurst. But if the Bobcats maintain their strong defensive performance, that could be instrumental in how they develop next season.

The two players arguably most deserving of credit are goalies Max Karlenzig and Matt Server. The pair were consistent throughout the season and have a bright future. The thought of both Karlenzig and Server playing four years in Athens conjures an optimistic future for Ohio.

The Bobcats’ defense is also in good hands. Players like Sam Turner and Scott Bagby led the way, and several returning freshman and sophomore skaters should help Ohio continue its strong defensive play.

This may have been more of a rebuilding year, but the potential of the Bobcats is crystal clear. Just how much they improve in one off-season has yet to be seen, but improvement is coming for certain.