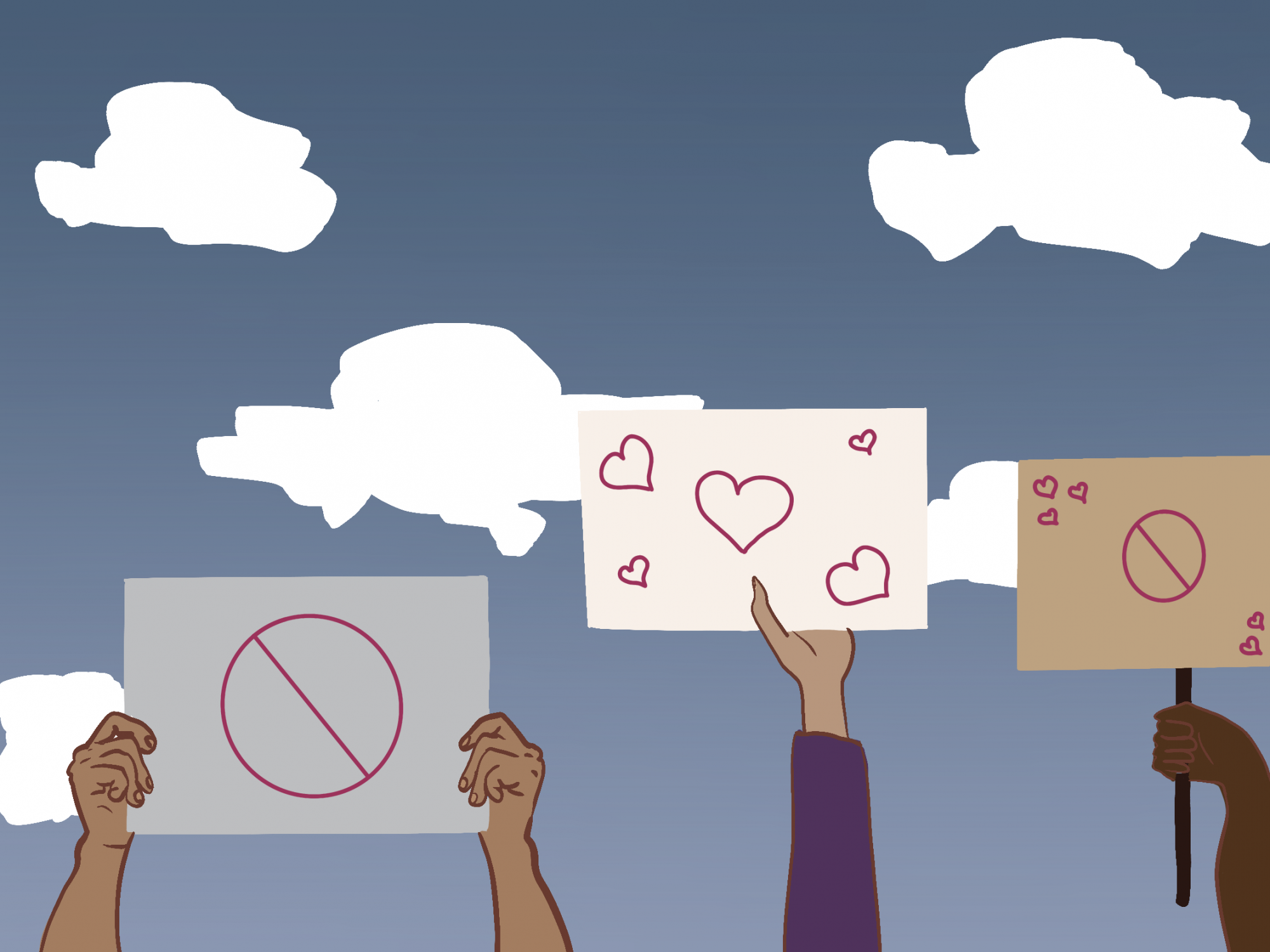 Students can engage in social justice activism on campus, in Athens

T hey exist wherever people look. The Black Lives Matter movement, the Me Too movement, the Say Her Name movement and countless other efforts at raising awareness to causes and fighting for social justice take over not only in physical spaces with protests and marches, but in media spaces with social media hashtags and informational videos.

The fight for social justice rages on. In any capacity where equity isn’t present, be it racial, sexuality, gender, socio-economic, disability or ethnic equity, there will be a group or many groups fighting to gain that equity.

At Ohio University and in the surrounding Athens area, there are a lot of opportunities to join the fight for social justice that don’t necessarily require being right on the front lines of the protests.

“Being able to pursue higher education is an immense privilege in a lot of ways, but especially in that this is a unique time for students to learn,” MaryKathyrine Tran, assistant director of the OU Women’s Center, said in an email. “Ohio University has over 500+ student organizations, a plethora of events and programs each year, and so many different unique folks that make up our Bobcat community. I encourage students to take advantage of this time and space where they are encouraged to learn, ask questions, and utilize all the resources provided for them.”

In addition to her work at the Women’s Center, Tran teaches the Intro to Diversity Studies course at OU. In this course, she addresses one of the most common misconceptions about social justice work, and that is the concept of being an ally versus being a co-conspirator.

For best understanding this concept, Tran recommends the “Ally vs. Co-Conspirator: What it means to be an Abolitionist Teacher” clip by Dr. Bettina Love. Simply put, however, an ally is someone who shows support from afar, while a co-conspirator shows support through actions.

“For many of us, we may have been taught the best way to support groups that we may not identify with is to be an ally,” Tran said in an email. “... Dr. Love urges us to switch our perspectives to being co-conspirators - folks who work actively to support others. This looks like bystander intervention, advocacy with the populations you are serving (as we don’t want to speak over or for populations we are co-conspirators for), and, as Dr. Love brilliantly states, ‘put something on the line…take a risk’ with the privilege you have. It is not enough to be an ally, to show support for a group experiencing oppression, but something active must happen.”

Tran encourages students to further their co-conspirator status by getting involved with the Women’s Center. Not only are there a lot of great speakers, interactive activities and other programming, but the Women’s Center also practices a huge emphasis on intersectionality and works to incorporate as many identities as possible. This includes the annual National Eating Disorders Association Walk, the annual Take Back the Night rally and march, the SayHerName workshops and more.

“We have three identity centers within the Division of Diversity and Inclusion (the LGBT Center, the Multicultural Center, and the Women’s Center) who offer educational programs, events, and trainings that can help folks create a solid framework of knowledge as they begin this work and get connected with campus partners and stakeholders who can help students continue the work,” Tran said in an email. “Some student organizations who have been very active in championing social justice causes on campus, while noting that this is just a small segment of organizations, include the International Student Union, ALLIES, (Black Student Cultural Programming Board), and both Undergraduate Student Senate and Graduate Student Senate.”

As Tran said, OU’s Black Student Union (BSU) is a prime example of a campus organization that works hard in social justice reform. The group works to create a cohesive bond among the African American student community at OU by promoting social, cultural and political awareness of African American issues not only on OU’s campus, but internationally as well.

Lauren Brown, president of BSU and a junior studying chemistry pre-pharmacy, said it’s important to get involved in social justice activism opportunities on campus because it shows that students care about more than just themselves and want to inspire change that will positively impact large groups of people.

Brown said though BSU is a place for Black students to connect and grow together, the organization is also extremely welcoming of co-conspirators and anyone who wants to learn or do more.

Outside of university-sanctioned centers and organizations, social justice activists can find opportunities in the Athens area. One such opportunity is Passion Works Studio, 20 E. State St., where people can volunteer with artists that have developmental differences.

Nancy Epling, artist in residence and internship coordinator with Passion Works, believes people with disabilities are often a group that are forgotten about when exploring the fight for social justice, and that Passion Works is a good place to engage in being a co-conspirator.

“I think just to get their foot in the door and be in that process of becoming that is just recognizing that people with developmental differences, or as other people say, developmental disabilities, those people exist in our community, and they're very important, and very vital people in our community and they're doing incredible things,” Epling said. “Coming into Passion Works, students specifically get the opportunity to experience really amazing people in a really safe and comfortable setting that is no pressure.”

Prior to the coronavirus pandemic, there were anywhere from 10 to 20 volunteers per day in Passion Works’ studio. They’ve eliminated any excess hands from the studio to keep up with COVID-19 guidelines, but Epling said once herd immunity is reached and the area is a little more safe, they will start allowing for volunteers again.

She encourages anyone who wants to learn more about people with disabilities or just do something to become active in social justice to get involved with Passion Works, as it’s not only a way to support a large group of people, but a way to have fun while doing so.

Tran, Brown and Epling all encourage students to explore resources like Bobcat Connect, Facebook events and more to see what they can do to be involved in social justice activism. In addition, they encourage students to learn about social justice, co-conspirators and equity through their own research, and use social media to elevate others’ voices, repost informational media and connect with others who are on the same mission.

“It is imperative that we recognize that social justice activism can look a variety of different ways depending on ability,” Tran said in an email. “Many times we associate activism with marches and protests, but activism can also look like donating money or time to causes you care about, actively educating those around you through bystander intervention, advocating for policy changes, getting involved in your local government, and more. We have so many opportunities to connect with each other that it is so important this work is not done in silos; it’s important for folks as they move toward being co-conspirators that they know who is already doing the work and what ways can we support initiatives already in motion. That way we can maximize impact, resources, and longevity of different projects.”