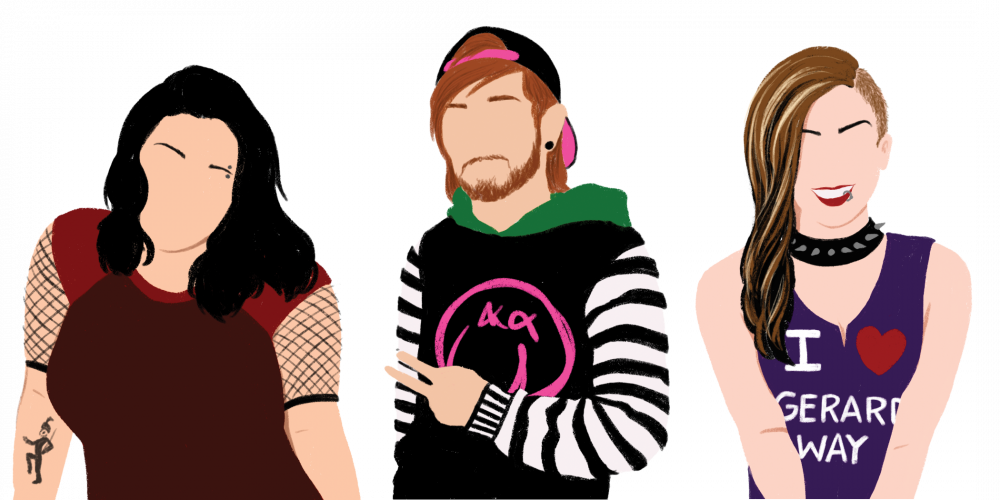 How the emo phase left its lasting mark

For some people in their 20s, reflecting on their early teenage years means remembering angsty music and bad style.

A mix of black and neon-colored clothes and studded accessories purchased at Hot Topic were physical manifestations of a taste for a range of music artists. Summers meant weekends spent at Vans Warped Tour, and the general assertion of being “different” and “misunderstood” was amplified through emotionally charged lyrics often validated by internet communities.

The classification of “emo” music can be ambiguous. There seems to be little to connect artists like Jimmy Eat World, My Chemical Romance and Never Shout Never stylistically. Nevertheless, the bands are often lumped together, along with the related unconventional style choices, as the components of the culture of “emo.”

Commentary has risen on an apparent resurgence of the musical genre, specifically, with the aging of those who loved it in their younger days. Hours-long Spotify playlists featuring bands far past their commercial primes attract thousands of monthly listeners, and it’s hardly uncommon to hear a Fall Out Boy hit circa 2005 played and enthusiastically sung along to in a college bar.

Whether it be because of trends in the music industry and the rise of internet music consumption or a more emotionally resonating nostalgia factor, it seems young adults still feel quite connected to the music that became the soundtrack of their lives during their most teen angst-filled days, leading to a rejuvenation of a genre of the recent past.

A movement is born

The rise of emo music in the early 2000s and its resurgence in recent years could be attributed to the same thing: the internet.

The advancement of streaming services and the growth of social media has led to new means for sharing music likely contributed significantly to the popularity of emo music during its formative years, Josh Antonuccio, a lecturer in the music production and the recording industry program, said.

“It was extremely popular and catered to the tastes of many people who were growing up in that generation,” he said. “I think at the same time, the growth of streaming services and opportunities to engage with that music online and create online communities around it and build festivals around it was a huge part of facilitating its growth.”

A timeless element of musical genres is the construction of a culture surrounding them by its most passionate fans. Whether it be a kind of subculture like emo music or a more mainstream pop artist, like Ariana Grande, fans incorporate fashion and other elements into their lifestyle that are relevant to their favorite artists.

“It’s like anything. A group of people feel drawn to something, feel connected to it, and then want to build a culture around it,” Antonuccio said. “Any genre or artist has a fan base that feels very passionate about what they’re putting forward, and they want to feel connected to that.”

Although the exponential growth of social media and internet use has changed the dynamic around music subcultures since emo’s peak, it’s also allowed those early-2000s artists to regain popularity a decade after their commercial prime.

“The internet and streaming services allow things to live more infinitely than ever before,” Antonuccio said. “So there is no shelf-life. You can build ongoing value on something regardless of what year it’s released.”

Nostalgia for a time gone by, of course, can also play a role in the re-emergence of a musical genre that has since fallen out of popular appeal. Reunions and remasters can allow artists another swing at the market, but emotional appeal also plays an important part.

“Resurgence really comes out of nostalgia for that era,” Antonuccio said. “With specific genres, I think if you feel attached to it in your youth, as you get older, invariably a generation’s going to want to reach back and rekindle memories and share things.”

More than a phase

Bobby Fleck’s emo phase left its impression on him. It still influences him today.

Compared to some artists associated with emo culture, he was interested in more hardcore groups. Among his favorites were Suicide Silence, Asking Alexandria and Bring Me the Horizon. He watched them perform at Warped Tour and spent his middle school days, enjoying the feeling that his tastes set him and his friends apart from others their age.

“It allowed me to be myself, I guess. Or feel like I was myself,” he said. “Around that time, you’re trying to figure everything out, and you’re very impressionable around there. I had a lot of friends who were into it too, and we went to a lot of concerts and it all just kind of stayed around and influenced me.” 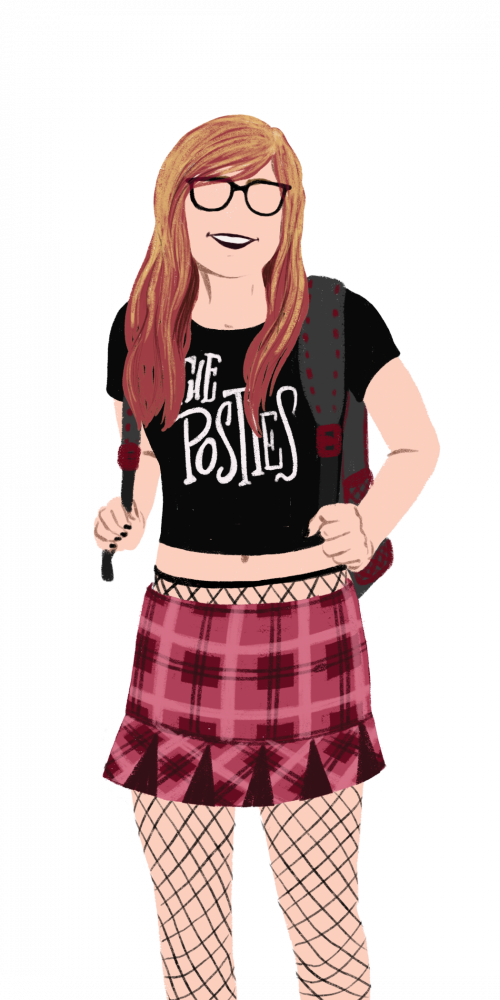 Fleck still listens to the music he loved in his early teenage years. He’ll spend a few days each month listening solely to the debut album from the band Attack Attack! called Someday Came Suddenly, and shuffling through his music library brings up similar songs he may have temporarily forgotten.

Fleck’s career pursuits were also influenced by his early passion for music. A senior studying music production and the recording industry, he remembers wanting to be in a band when he was young, eventually leading him to study music and to become a DJ.

“It definitely made me want to get more involved in music, because that was the music I wanted to play,” he said. “Just the energy the shows would have and the music at the time. … It definitely aided in it.”

During DJ gigs, Fleck will occasionally play pop-punk hits from the early 2000s. Blink-182 and Fall Out Boy remixes appeal to those whose favorite throwback jams are the songs they loved during their own emo phases.

“It’s nostalgia stuff now,” Fleck said. “We’re at the age where we’re going out, and we’re able to drink and go the bars, and it’s carrying over into our generation. And that’s our nostalgia or our throwbacks now. Every generation kinda has that.”

Fleck said his affinity for emo culture can still be seen in the way he dresses –– often all black. It’s a simple way of expressing it, he said, but the influence is clear. The culture surrounding the bands he first started to appreciate in middle school has left its impression on more than his music library.

The fashion elements of emo culture made the movement known on a surface level even to those who may not have been familiar with the music associated with it. Dark or bizarre clothing and accessories demarcated people as members of the broadly defined fandom, even if they weren’t wearing an artist’s merchandise.

Maggie Boyle, fashion director for Thread magazine, remembers going through her own emo phase at about age 13. She was one of the few people she knew who wore Doc Martens, and her favorite styles included checkered printed scarves, leggings under denim jeans and zip-up hoodies. She also dyed her hair pink.

“It’s so ugly thinking back on it,” she said.

Despite its less-appealing elements, emo-associated fashion may have had an influence beyond those who explicitly identified with the subculture. Boyle said the elements of the looks associated with emo culture could be seen in other popular trends of early 2000s, too.

“It was all kind of tied together,” she said. “I think the emo trend was kind of one of the biggest things in fashion back in the 2000s, so there were ways you could incorporate it without being, like, full-on emo.”

Just like the music of the emo era left its impression on those who embraced it, the fashion associated with it did, too. Music and style often go hand in hand, particularly with tastes that may be considered unconventional, Boyle said.

Something old and something new

Scott Kutil had a bit of a late emo phase. He listened to pop-punk when he was a teenager and had the appropriate shaggy haircut. But it wasn’t until his freshman year of college that a friend sparked a bigger interest in the genre and related artists.

Now Kutil, a senior studying music production and the recording industry, sees the resurgence of emo’s popularity as the result of a few phenomenons, one of them being the evolution of genres. The influence of punk music has not only renewed interest in hits of the past but has also brought new genre-bending sounds to fruition.

Kutil theorizes about the transformation of music historically, from ‘50s rock-n-roll, to the psychedelic sounds of the ‘70s to ‘90s hip hop to early 2000s pop-punk and beyond. To him, heavy metal’s decline and resurgence in the early 2000s makes sense in the context of pop-punk. Similarly, the influence of pop-punk on modern hip hop artists like Lil Uzi Vert and XXXTentacion is evident and could also speak to the genre’s resurgence in popularity.

“It’s super cool. And I think the culture around is going to be less, like, goths with weird hair,” Kutil said. “Once Post Malone does a collaboration with, like, Crown The Empire, then it’s going to be cool.”

The other factor in emo’s rejuvenation is, once again, nostalgia. Kutil also has DJ-ing experience. He’s played at Athens fests and regularly incorporated popular emo hits into his setlists, and he’s seen the reactions the decade-old songs can still elicit from partygoers.

“People go off, lose their s--t, if you play any old Fall Out Boy or Panic! At the Disco,” he said. “They can sing the whole thing. They know it.”

Kutil thinks the music reminds people of a simpler time. Although their emo phase may not have been the best years of someone’s life, it was a time when what mattered was spending time with friends and listening to music with an identity attached to it. Those formative years when memories and moments start leaving their mental marks a little more strongly stick with people, and the music they listened to does, too.

“That was the soundtrack of our lives back then,” Kutil said. “So whenever someone hears it, it kinds of brings you back.”