J essica Littler stood in the kitchen of her two-story recovery home on the outskirts of Athens, and prepared her lunch for the 10-hour shift that awaited her at work.

Littler avoids sugar, so she packed a lunch wrap with ingredients that the house provides for her during her stay.

“RWRP stands for Rural Women’s Recovery Program,” she said. “They really take a holistic approach to (addiction) recovery. When I was there, I was taught to avoid sugar … We also aligned our chakras and things like that.”

Littler, 40, of Wilmington, has worked at Residential Programs Inc., a call center on East State Street, since October 2018. RWRP was one of the first places she went for treatment after leaving prison.

And for a woman with two felonies, getting the job was anything but easy.

In 2015, Littler was caught with two ingredients commonly used to manufacture methamphetamine, including a box of Sudafed and a pack of batteries. She served a year in the state penal system and became one of the 1.3 million people arrested for drug related offenses across the U.S. that year, according to The Center for American Progress.

Littler’s situation isn’t uncommon, Shawn Stover, Reentry Program coordinator for Ohio Means Jobs, said. Most of the people who come to him for help struggle with drug addiction.

“I would venture to say about 80% of the people that come to us had an issue with substance abuse,” he said. “Often the (parole officer) will set them up with me, but coming (to Ohio Means Jobs) is all voluntary.”

Stover’s office in The Plains is one of the first stops that people with a felony make when returning to the area after prison. He provides them with services like transportation and helps educate them on the next steps moving forward.

He’s seen more than 500 area residents return from prison in the last five years, he said.

Although they’ve served their time, the punishment doesn’t stop once an inmate leaves prison, Stover said. A large amount of discouragement occurs when returning residents try to assimilate themselves back into society after serving time.

“They’ve lost everything and have to start from scratch,” he said. “Some people don’t even get into the system, and most banks require at least a $50 deposit to start a savings account.”

Littler's worst days came after her prison sentence. In March 2018, her long-term methamphetamine usage had caused a blood clot, and she used meth while receiving treatment in a hospital.

She was forced to leave.

The next day, Littler called her aunt in Athens.

That’s how she was introduced to Serenity Grove.

Places like Serenity Grove, the non-profit recovery house where Littler lives, provide a safe space for those recovering and are an essential step in moving forward.

In August 2018, Littler was hired by a biotech firm. She made it to the final round of hiring before the employer asked if she had any felony charges. 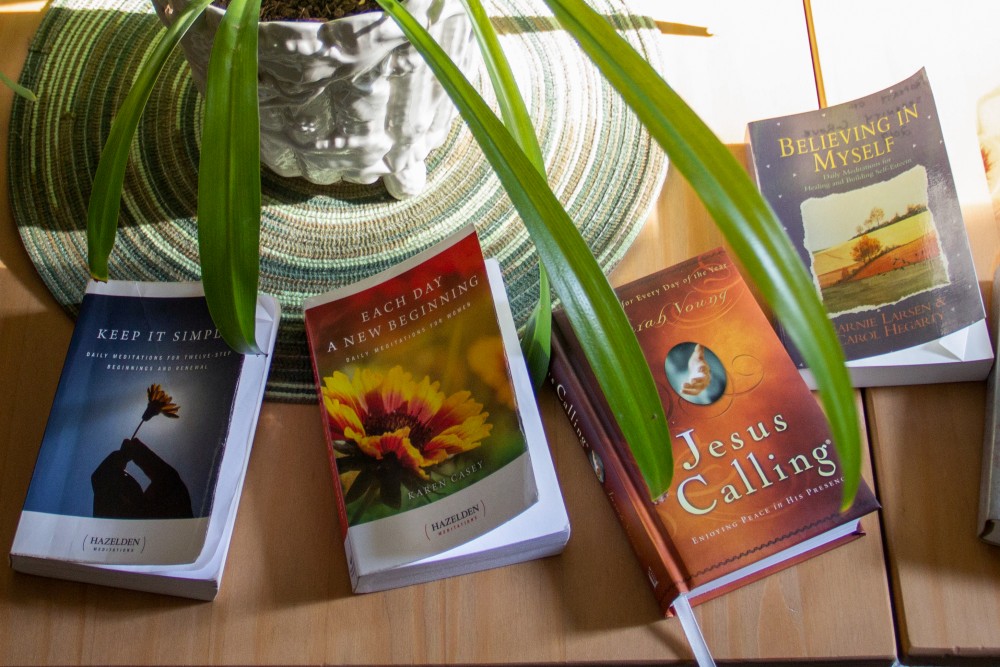 “I just figured I’d be honest and that it would be better than lying about it,” Littler said. “At first the woman was like, ‘Yeah, that shouldn’t be a problem,’ but as soon as I mentioned meth, it was over.”

After the incident, Littler said she gave up, returned to Serenity Grove and was completely discouraged. The executive director of the non-profit, Betsy Anderson, snapped Littler out of the funk.

“We as humans really need to start treating addiction like the disease it is,” Anderson said. “It’s not that simple … The ‘get a job’ part isn’t easy.”

Approximately 60% to 75% of former inmates remain unemployed up to one year after their release, according to Forbes.

Littler’s second job out of prison was at a McDonald’s. She tried to cash her first $400 check in early fall 2018. Littler was surprised by the kindness the local teller first displayed, but the kindness quickly vanished after the woman at the desk retrieved Littler’s financial history and credit score.

“The lady sat down and offered me a mint and asked me my social security number,” Littler said. “Then she said she had to go talk to a manager. When she came back, she told me I couldn’t open a savings account because I had too many addresses from different evictions.”

The teller then pulled the mints away from Littler and told her that if she paid off the fees for her prior evictions, she could open an account.

“Businesses have really grown within the last 16 years, and there’s been a lot of movement for change,”-Kristi Kinnard, general manager of Career Connections in Athens

“I was mortified,” Littler said. “I did a year for what I did. I’m not saying I wasn’t wrong, but I just don’t understand how something so long ago can still affect my life.”

After surveying 190 former inmates from 2017 to 2018, over 50% had labor-related jobs, according to data that Stover provided from Jobs Ohio. A large amount of those include under-the-table cash transactions.

An additional 25% identified as homeless upon release and stayed in shelters and various places including a friend’s when allowed, according to the same data.

Anderson said morale at Serenity Grove took a hit when the non-profit struggled with buying a house for the women to live in. This was largely due to the negative stigma associated with residents returning from prison, she said.

“We had two deals fall through,” she said, “one in Athens and one in Nelsonville.”

Despite the initial discouragement, Serenity Grove is deeply rooted in community activities. Being active in the community helps fight the stigma, Anderson said.

In the past year, women involved with Serenity Grove have participated in Boogie on the Bricks, a free community music and arts festival in Athens, the Athens County Recovery Walk and the Chili Bowl.

Kristi Kinnard, general manager of Career Connections in Athens, said to some extent that businesses in Southeast Ohio have benefitted from hiring residents returning from prison.

“Businesses have really grown within the last 16 years, and there’s been a lot of movement for change,” she said. 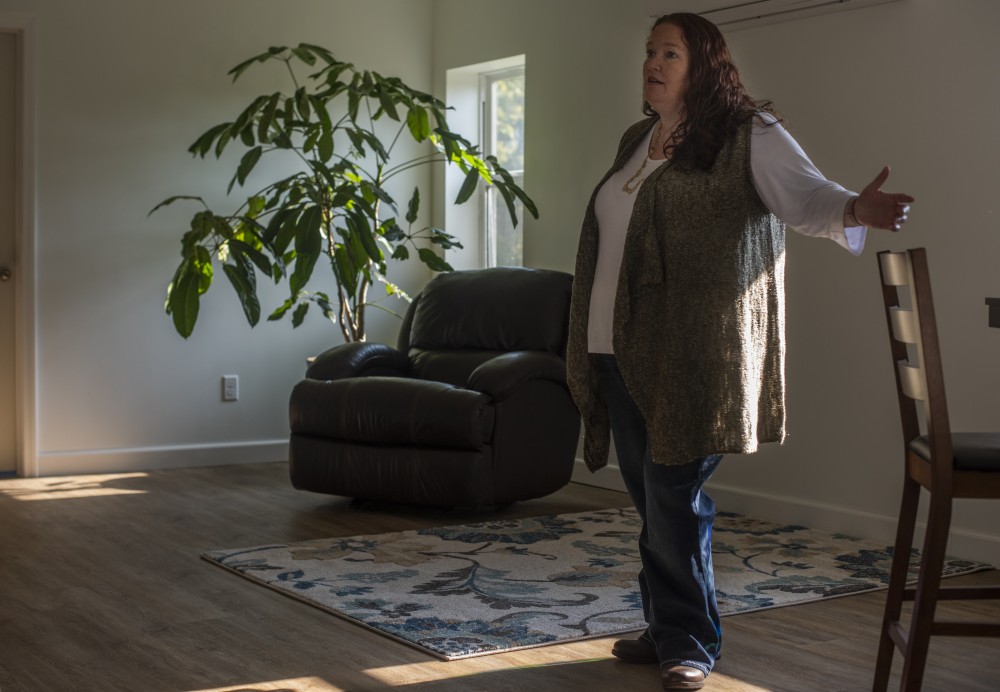 Jessica Littler stands inside of the newly renovated meeting room at Serenity Grove.

Career Connections serves five counties in Southeast Ohio and serves as a satellite human resources office for the businesses that it works with. Most businesses they serve have five to 15 employees, and Kinnard said she’s seen how businesses have been reacting to formerly incarcerated people applying for jobs.

While Athens has a large workforce, that isn't the case in other small, rural communities in Southeast Ohio, she said.

Most residents coming back to Southeast Ohio from prison choose to stay in Athens County, Stover said, but some travel to where there’s a better job market.

But returning residents who often struggled to find jobs might be getting second chances, according to a recent report by the Society for Human Resource Management. The report surveyed more than 2,000 corporate managers and HR executives nationwide on their attitudes about residents returning from prison.

“I can’t really decide if I’m saving up for a car or a place of my own,” she said.

She doesn’t see her two children often. They currently live in Wilmington with her brother, but she’s looking forward to seeing them for a three-day weekend.

For now, Littler continues to engage in service work for the community. She is also the general service representative for the Athens County Alcoholics Anonymous and Narcotics Anonymous.

The non-profit is in the middle of preparing for a Halloween Luau, an all-day sober event at Lake Snowden, nine miles southwest of Athens.

“It’s no addict left behind,” Littler said. “We try to create events where people struggling can come and have fun sober.”