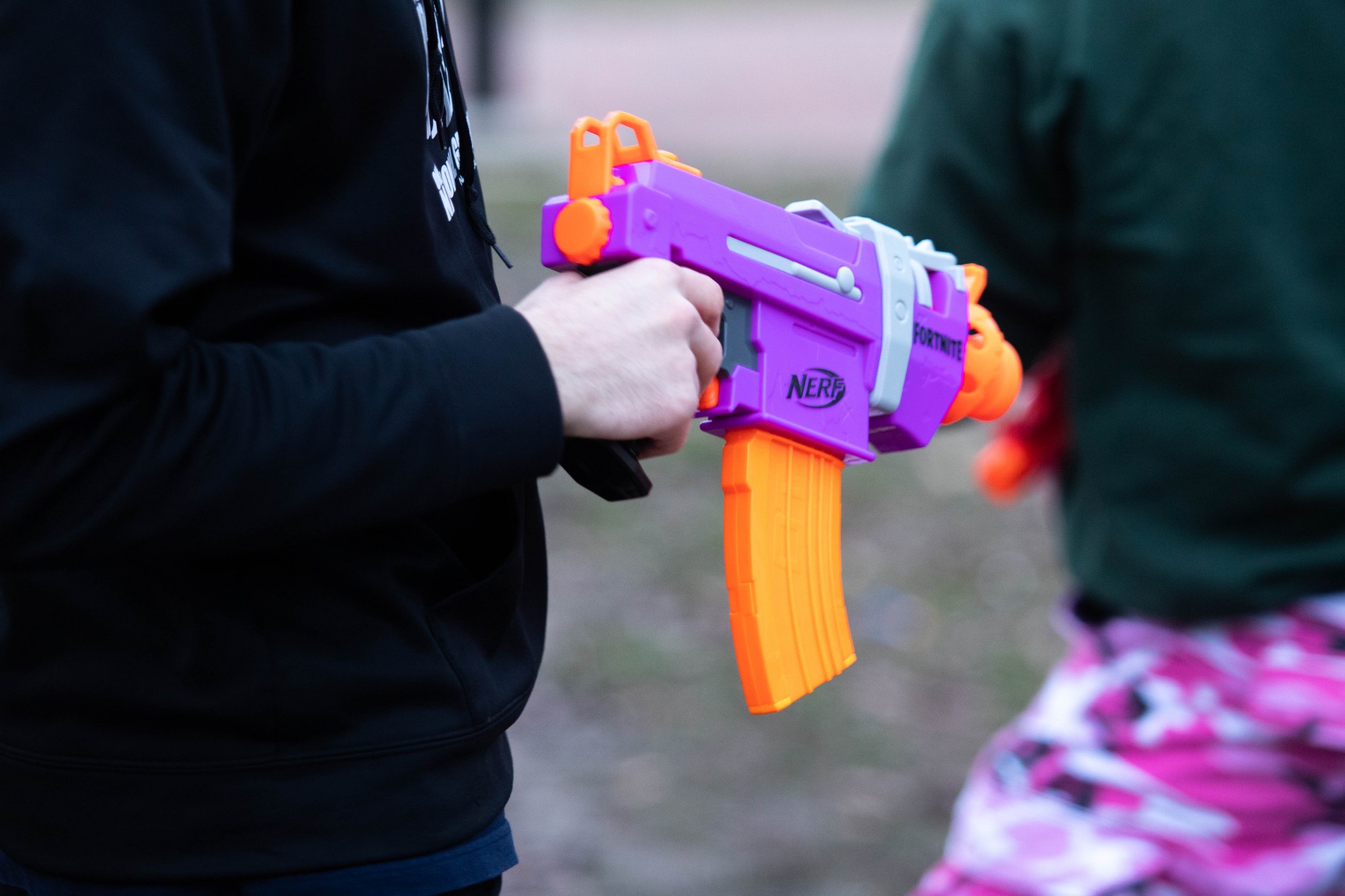 Members of the game battle it out for 14 years.

I f students ever see people running around campus with nerf guns, they shouldn’t be afraid. Those people are just hunting zombies.

Humans vs. Zombies: Athens, referred to as HvZ, is part of Ohio University’s Urban Gaming League, a group that brings students together to play in large-scale, real-life, urban settings.

HvZ is played 24/7, excluding safe zones. Games have set start dates and end dates, Zack Kolumban, an HvZ administrator, said. Games can last from one day to a week.

“We try to pace the game to last the set amount of time,” Kolumban, a senior studying media arts and studies, said. “As the turns are happening, we funnel the amount of turns to make sure the game lasts the entire time.”

HvZ employs lots of costuming. Zombies and humans are marked by simple bandanas: humans wear theirs on their bicep, zombies on their head. Players are often all geared up in army-style garments. Though sometimes realistic, costuming is usually made by the players themselves.

“(Players) have their own equipment they use personally,” Kolumban said. “The staff gear is mostly DIY.”

Though HvZ is a game started by and for students, anybody can play. Local non-students play in HvZ: Athens, Kolumban said.

It can be a little jarring to see students run around decked out in full-body army suits and holding nerf guns. But over the past decade, people usually know what’s going on, Kolumban said. Sometimes onlookers join mid-game.

“There are people who just jump in and play with us, right off the street,” Kolumban said. 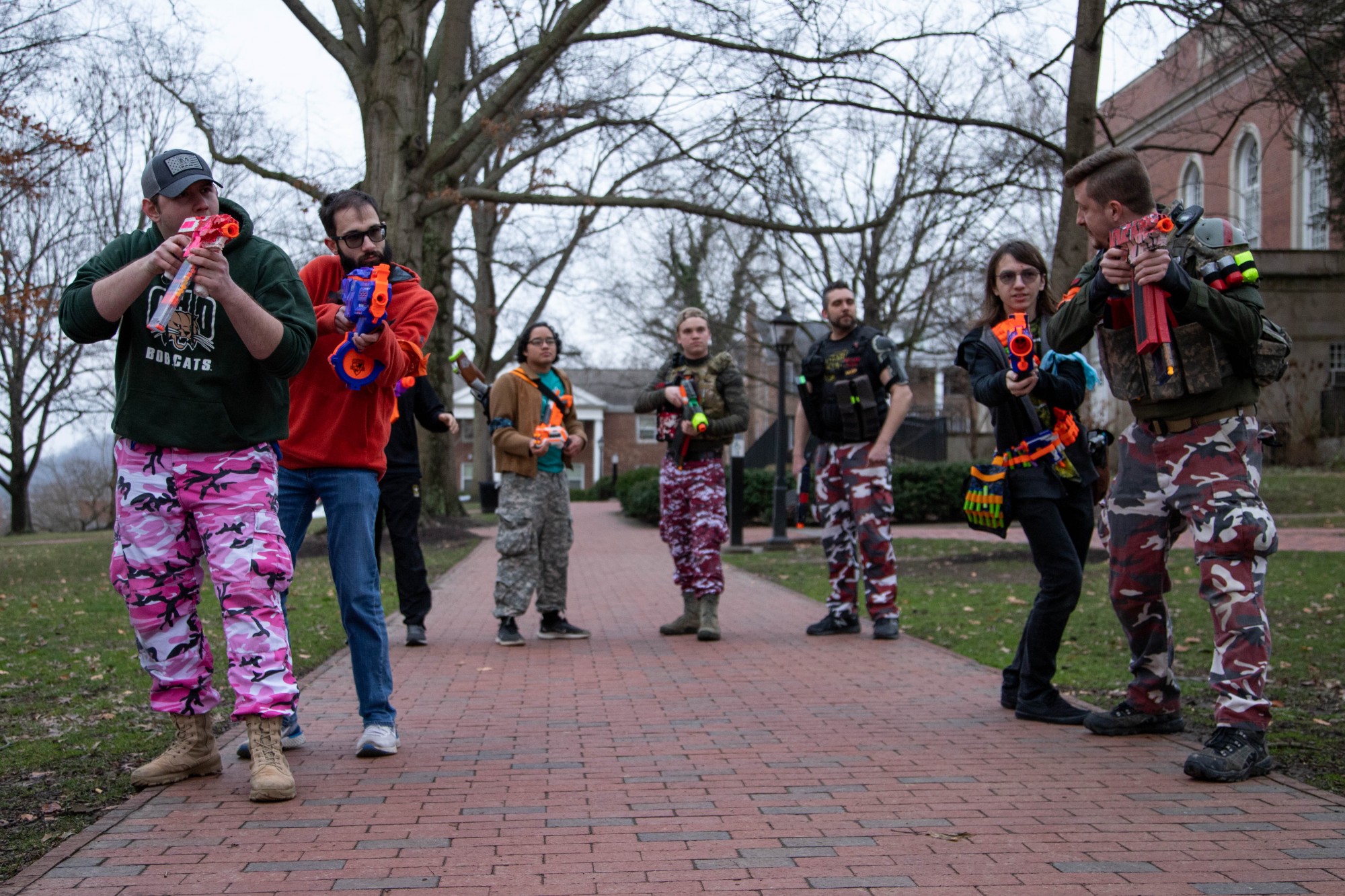 Members of Humans vs. Zombies: Athens stand in formation as they prepare to defend themselves from a "zombie" on Tuesday, Feb. 11, 2020.

“I go into APD and OUPD and give them the dates and times and contact info,” Kolumban said. “They already know the drill.”

During Sibs Weekend, HvZ was supposed to play on College Green, but an event with police officers occupied the space, calling for a quick change of plans, Kolumban said.

“We just said we’ll go to West (Green). We don’t have to go to College Green,” Kolumban said.

As an administrator, Kolumban is the go-to person for when something goes wrong. He’s there to help out in times of crisis, from last-minute change of plans to mediating conflicts.

“I monitor everything that's going on,” Kolumban said. “I’m the first response in (the) event of an emergency — the first person who’s there to figure out what's going on.”

The game has changed a lot over time, Jeremy Hayes, who has been with HvZ: Athens for about a decade, said. A combination of things have pushed evolution in the game.

When Hayes first started playing HvZ, the group consisted of 200 to 300 people. His first game had 320 participants, he said.

“Everyone was coming out,” Hayes said. “People had a lot more fun being a zombie.”

The more advanced the nerf guns have become, the easier it is to tag more people in the game.

“As blasters got better, people got disinterested,” Hayes said.

“I always have extra (supplies) if someone wants to join,” Hayes said.

HvZ is for anyone, Hayes said.

“It’s for kids and nerds alike.”

Rob McMillan was one such child. He joined HvZ: Athens when he was only 9 years old. McMillan, now a junior studying sales, has noticed changes in HvZ, too. Back then, everything was a bit more “real.”

“People got really into character,” McMillan said. “As a 9-year-old, as far as I was concerned, that was the apocalypse.”

McMillan has found some of his best friendships in HvZ. This semester, he ran past Ryan Doyle, a sophomore studying music education, as he was playing HvZ on East Green. Though it’s only been a couple weeks, they’re now best friends.

For McMillian, Athens is an extraordinary place in general, but to play HvZ here is something totally special. By just recruiting people off the street and making friends, years of playing HvZ have made it into a very big part of his life.

For those who want to get involved with HvZ, stay up to date with the group’s Facebook page. The next event will be Feb. 28-29.