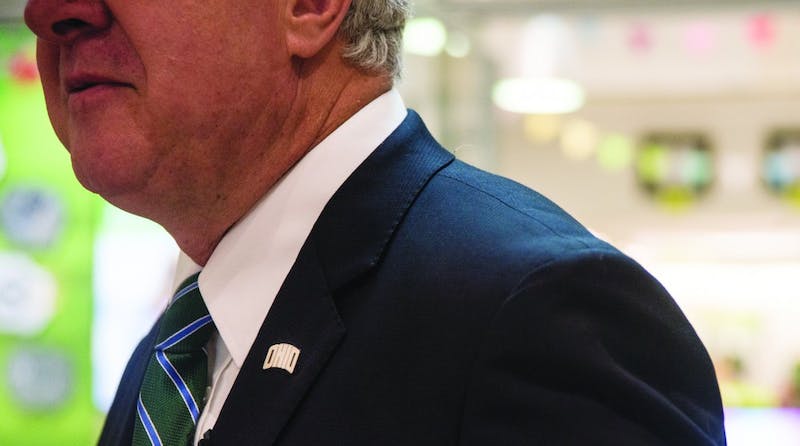 
Ohio University’s newest president will make more money in one year than many Athens County families will make in 10.

At $475,000, President Duane Nellis’ base salary dwarfs the $34,000 median household income in Athens County in 2015. His housing and vehicle stipends alone add up to $72,000 a year. But that compensation package is in line with national trends, one university official said.

“The terms of Dr. Nellis’ contract, including the housing allowance, reflect national trends in higher education executive compensation,” OU Board of Trustees Chair Janetta King told The Post in a written statement. “President Nellis’ compensation affirms the high degree of confidence the Board has in him to lead the institution into its third century.”

Matching numbers to those national trends is difficult. But it is true that among public university presidents, Nellis’ compensation package isn’t unusually large.

Data from the Chronicle of Higher Education show many university presidents make more than double what Nellis will — Ohio State’s Michael Drake’s base pay was $813,000 in 2016.

Former OU President Roderick McDavis ended his career at OU earning a base salary of $500,000.

“The Ohio University Board of Trustees unanimously selected Dr. Nellis to serve as the University’s 21st President because of his proven history in higher education leadership, having served twice previously as a university President in addition to many other high-level roles,” King said.

Whether public university presidents are in general overpaid is a complex issue, said Barmak Nassirian, Director of Federal Relations and Policy Analysis at the American Association of State Colleges and Universities.

“It’s an interesting issue, and it’s complicated, and it doesn't have the kind of easy answers that either side would propose,” Nassirian said.

Nassirian said on one hand, universities operate in a marketplace, so it is true that in order to attract top talent, their pay scales must keep up with one another.

On the other hand, he said, there are some legitimate gripes with executive compensation at public schools — some public university presidents pull in more than $1 million annually.

“I don’t see it much as a problem, but that’s because — when I look at the pay of athletic coaches — Nellis is not even the highest paid person at the university” said Zachary Woods, treasurer of OU Student Senate, about Nellis’ compensation.

Woods said it’s important to look not just at the president’s salary, but also to consider the return on investment his employment will bring. He said it’s too early to judge Nellis by his paycheck.

“I think him and Mrs. Nellis will be bringing back a great investment,” Woods said, “But right now, it’s just waiting to see if that pay is justified.”

Nassirian said that pay raises for faculty across the country have grown more slowly than those for university executives.

“There has to be some serious balance,” Nassirian said. But he emphasized that “the problems of no university can be solved by adjusting one person’s salary.”

Nellis is set to receive a stipend of $5,000 per month to spend on housing, with the only restriction being he must live within Athens County.

McDavis’ contracts didn’t contain that allowance. For most of his tenure, the school’s chief executive lived on campus in a university-owned home at 29 Park Place, near Baker Center.

That changed in 2015 when a bat infestation led McDavis and his wife to vacate the house. It was a controversial move that sparked protests and brought national media attention to OU.

The bat problem didn’t entirely drive that decision, though — the university had been exploring moving the president off campus in years prior, according to a previous Post report. Plus, the university set aside more than $125,000 per year to cover costs of operating the property.