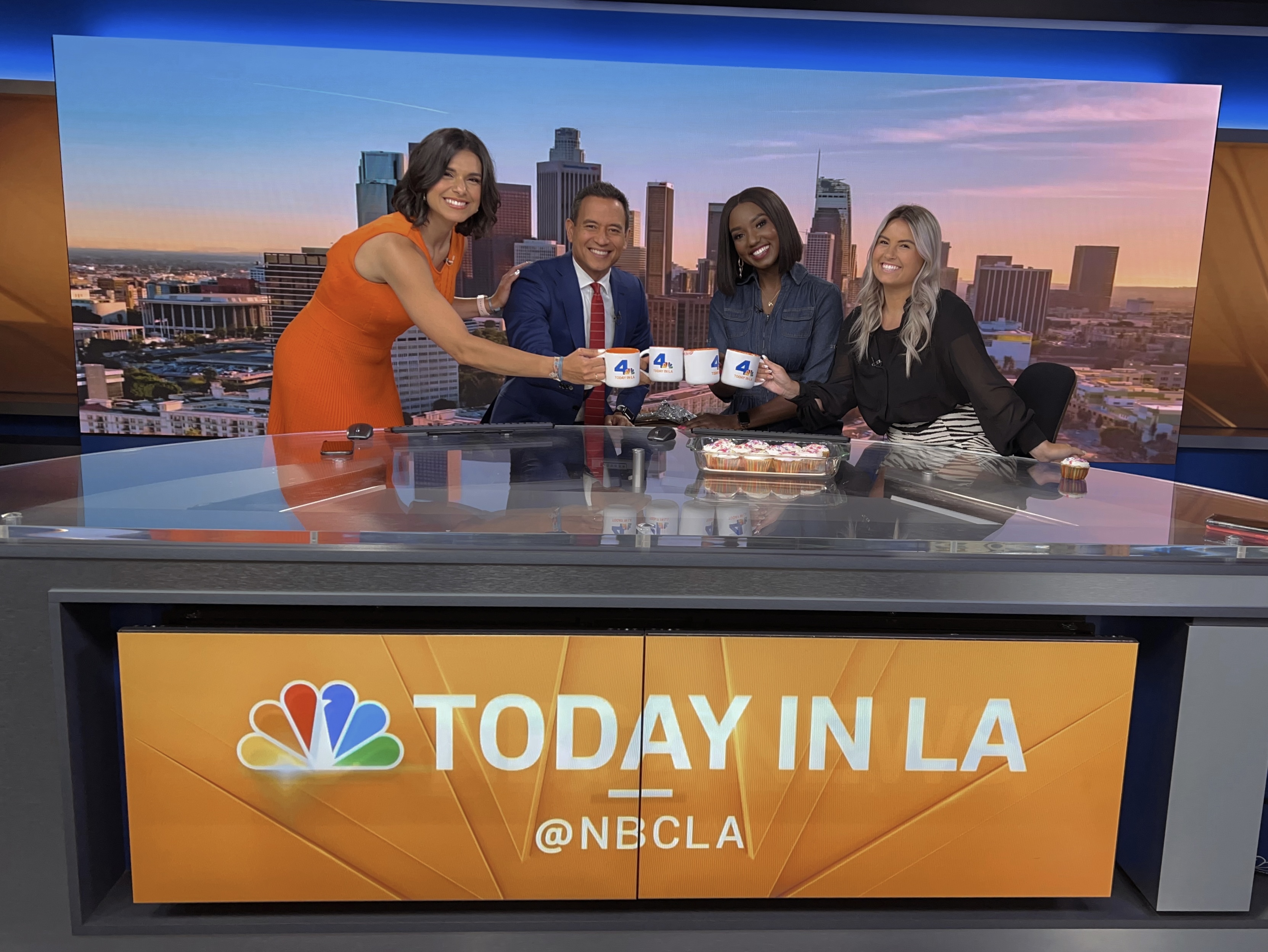 By Emma Dollenmayer | The Beat Editor

It was the first weekend of June in California. I was driving down the PCH; an adventure everyone should take at least once. It evokes a movie-esque feeling. The windy road provided the most scenic view of the Pacific Ocean and an intricate mountain landscape, only one of the four states where you can live amongst both.

I attempted to drive down the iconic street like a confident LA native and not a midwesterner at heart. I had my hair extensions in and sunglasses on. I could fit in, right? Sure enough, my passiveness on the road and excessive breaking proved otherwise.

While driving, there was an influx of distractions: Stereotypical tanned Malibu surfers, Teslas, drivers with road rage, excessive stoplights and of course, the LA basin nearing in the distance. It was overwhelming but perfect. That’s the best way I could ever try and describe my time in the golden state…overwhelming, but ridiculously perfect.

For four out of the eight months that passed in 2022, I have lived elsewhere other than Ohio, a goal I had always set out to do.

From the middle of December to the first couple of weeks in January, I studied abroad in Spain.

I then returned to Athens for the remainder of my junior year and continued my strenuous search for a summer internship. 73 applications later, I was beginning to feel less than optimistic. I wasn’t hopeless, but I started questioning myself and my ability to land a dream internship in a big city.

Come March, I received two consecutive emails, both from NBC but from different departments. I was what the kids call “geeked.” I genuinely had to pinch myself. The possibility of working for one of the top television networks in America felt unreal.

I replied to those two emails practically before the employers hit send.

Long story short, I interviewed for both positions over two days; my mind daydreamed about the rainbow-colored peacock logo.

To my surprise, I received both positions and had the opportunity to choose which I would accept. It still feels entirely unreal to say the least. I had 24 hours to choose, and I chose the one in Universal City, California, with NBC’s local station in Los Angeles, KNBC’s morning show, “Today in LA.” 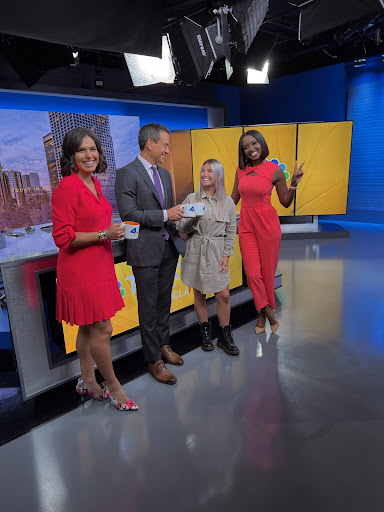 Me inside of the “Today in LA” studio with the on-air talent.

The decision to move across the country for three months was both thrilling and nerve-racking. I was working a morning show, which required working the overnight shift. I knew this meant it would be hard to make friends and meet people my age. This was undeniably a difficult concept to grasp for someone like me, who lived with six of my best friends for the majority of the year. I reassured myself it would be well worth it, though.

It was more than I could have ever imagined for both my personal and journalistic growth.

Before stepping foot on the West Coast, I had a bucket list of things I wanted to complete. And I must say, I did shockingly well at completing the majority of them.

I wanted to try different restaurants, experience various art museums, pretend to be a local, and cross off all of the touristy shenanigans, including, yes, the Hollywood sign. I did it all and more.

The moments and days that stood out to me most were not few and far between. I tried every day to romanticize my summer in Los Angeles and everything I did. I only hoped the big city would not chew me up and spit out the remnants of my old self.

If anything, it did, but it left a version of myself that I am proud to be.

After many long overnight shifts, it was easy to go home and sleep the day away, but I frequently reminded myself that I only had a short time to explore every inch of Los Angeles. Though near impossible, it got me out of bed in the mid-afternoon and would typically land me in Malibu.

Malibu became my haven while I was away. It’s a place everyone pictures being luxurious and grandeur, and I can’t stress how much more the beach town lived up to its expectations. 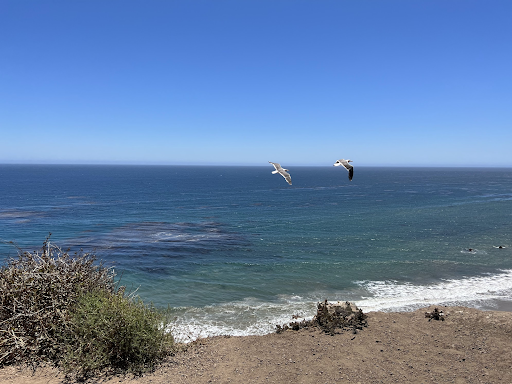 I spent a lot of alone time there, left only with my thoughts and the beautiful people of California around me, but I always appreciated the experience. I had never before valued alone time, but doing stuff like shopping or sitting at a restaurant with only the company of a waiter taught me more about independence than any advice or therapy session ever did.

The art of being alone scared me before; I always felt as if I were missing out on something better. However, before moving to California, I didn’t know my wants and needs or even myself. If anything, it was nice to get to know myself better because in the process, I discovered that I actually liked her a lot.

When I wasn’t alone, I was typically surrounded by the people who became my mentors at NBC. I thoroughly enjoyed spending time with those much more experienced than I, as their words of wisdom and life advice gave me the opportunity to learn and grow.

The same goes for when I was away from work, too.

I was fortunate enough to have a free place to stay because my aunt and uncle lived just a little north of where my office was located.

My aunt and uncle had lived in California since I was born, so I only saw them on family vacations or the few times my family visited. I was so grateful to have been granted an opportunity that also brought me closer to my extended family.

During my time there, they became my second parents. They were people I could go to when I needed career or life advice. Resultantly, they became two additional mentors I will now have forever, in addition to everyone I worked alongside.

My Aunt Lilly and Uncle Brian hiked the Hollywood sign with me, something they had somehow never done in their 25+ years of living in LA. They turned me into a wine connoisseur after going wine tasting at multiple vineyards in Santa Barbara, took me camping at Catalina Island and treated me to an incredible last meal at a trendy, upscale rooftop restaurant on the 71st floor of a commercial building. It was everything I had ever wanted. 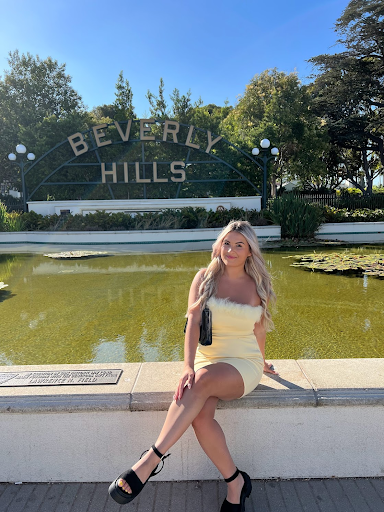 The Beverly Hills sign is located near the iconic Rodeo Drive. 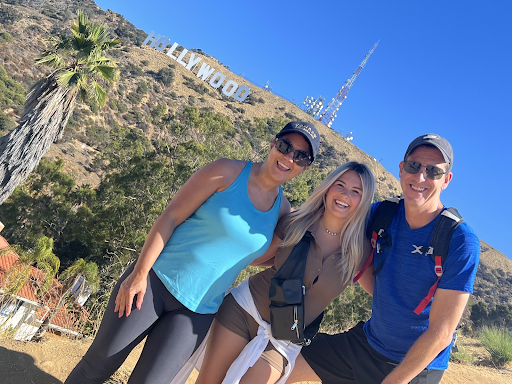 My aunt, uncle and I at the Hollywood sign.

I experienced a lot, such as the LACMA, the Getty Center, brunch at LA’s most chic spot, Catch LA, smoothie bowls in Malibu, Universal Studios, San Diego, and a walk down Rodeo Drive. Among all of the cool experiences, my most treasured part of living in LA for the summer was working every single day at KNBC, even if it meant waking up at 1 a.m. and drinking three cups of black coffee to get myself there.

I worked many jobs before, but despite my positive attitude, there were always days I couldn’t muster up the strength to go, regardless of my position. However, my internship could not have been more different.

I looked forward to returning to The Brokaw News Center the next day before my current shift ended.

My excitement was, in part, due to the work and the rewarding feeling. The other part was due to the people. Not only were these journalists some of the most talented in the industry, but they were also the kindest.

Often, because of the way the public perceives the media, many find journalists to be stern, stressed and stubborn. But again, this couldn’t be more untrue.

Prior to this summer, I worked primarily in digital and print journalism, so I was elated to finally get some broadcast television experience. The constant news cycle and civic duty to serve the public excites me and I decided there was nothing else I wanted to do for the rest of my life. I wouldn’t have come to this realization without KNBC or the people who helped me along the way.

I had never worked with people who were so willing and eager to help, from the morning producers, to the editors, the reporters (one named John Cádiz Klemack, who was even an OU alum!) and photographers I worked with out in the field, to my executive producer/lovely boss who made this all possible for me. Everyone put their full energy into my success and have now played an integral part in my career. 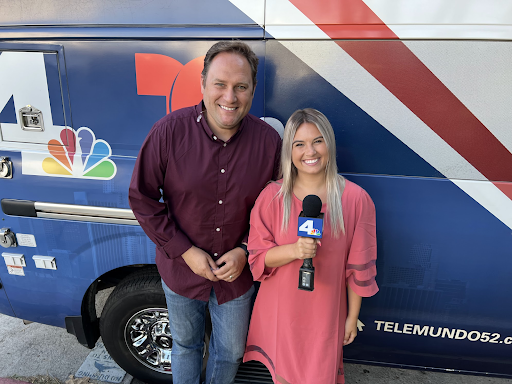 Reporter and OU alum, John Cádiz Klemack and I reporting at Echo Park.

The trust the “Today in LA” team put into me to write my own scripts, edit videos, create graphics, practice live shots and even pitch my own story idea, which then aired on live television, meant more to me than they will ever know. The feeling I left with each day after work is one I hope to feel again once I graduate and land a full-time position. 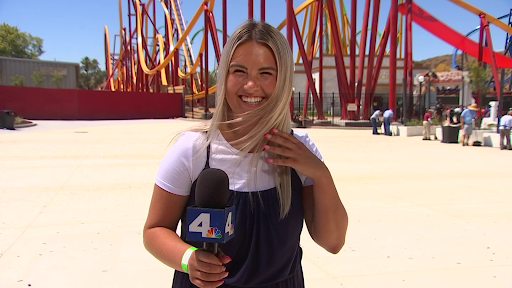 Me at the opening of a new Six Flags Coaster, Wonder Woman Flight of Courage.

They helped me find my passion, and for that I am eternally grateful. They were also the people, along with my family, who made leaving so immensely difficult.

Two and a half months simply wasn’t enough time. I finally found my place in the second largest city in America and had even mastered driving in LA traffic, then I had to leave. And that was the hardest part.

I always find it difficult to adapt to change. Yet I realized every time I did, such as when I first left for college, when I studied abroad in Spain and most recently, when I interned with KNBC in Los Angeles, was when I experienced greatness. However, I wasn’t quite ready to do it all over again. I could’ve stayed, just a little bit longer.

I could’ve had In ‘N Out and walked the coast of El Matador Beach a few more times. I could’ve watched the morning anchors live in the studio, more than just a few times.

Candidly, it was just as difficult to leave my “adult” life and “adult” job, as it was to leave my “kid” life at first.

I tried to think of all my goodbyes as see you laters. And it was a see you later because of the promise I made to myself and the city of LA.

After I received the most touching goodbye from the “Today in LA” team on live TV, while I fought back the tears, I headed to the Griffith Observatory to say goodbye to the city.

I stared at the downtown area from above and thanked it for accepting me. I thanked it for treating me well, showing me there is more in the world than just Ohio. Most importantly, I thanked it for giving me confidence in myself and my work that I didn’t have before. 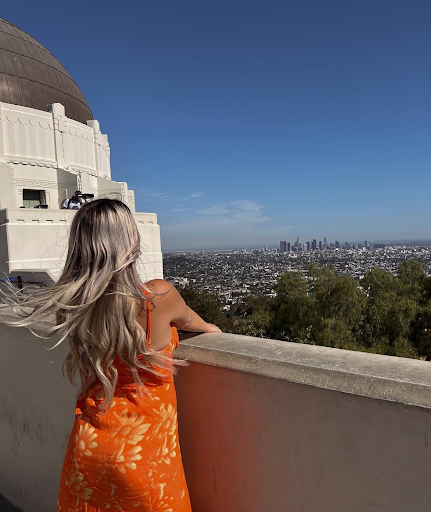 In that moment, I made it a goal to return there one day. I will do everything in my power to be a good journalist and end up in the golden state permanently.

After all, all the signs really do lead to sweet LA.