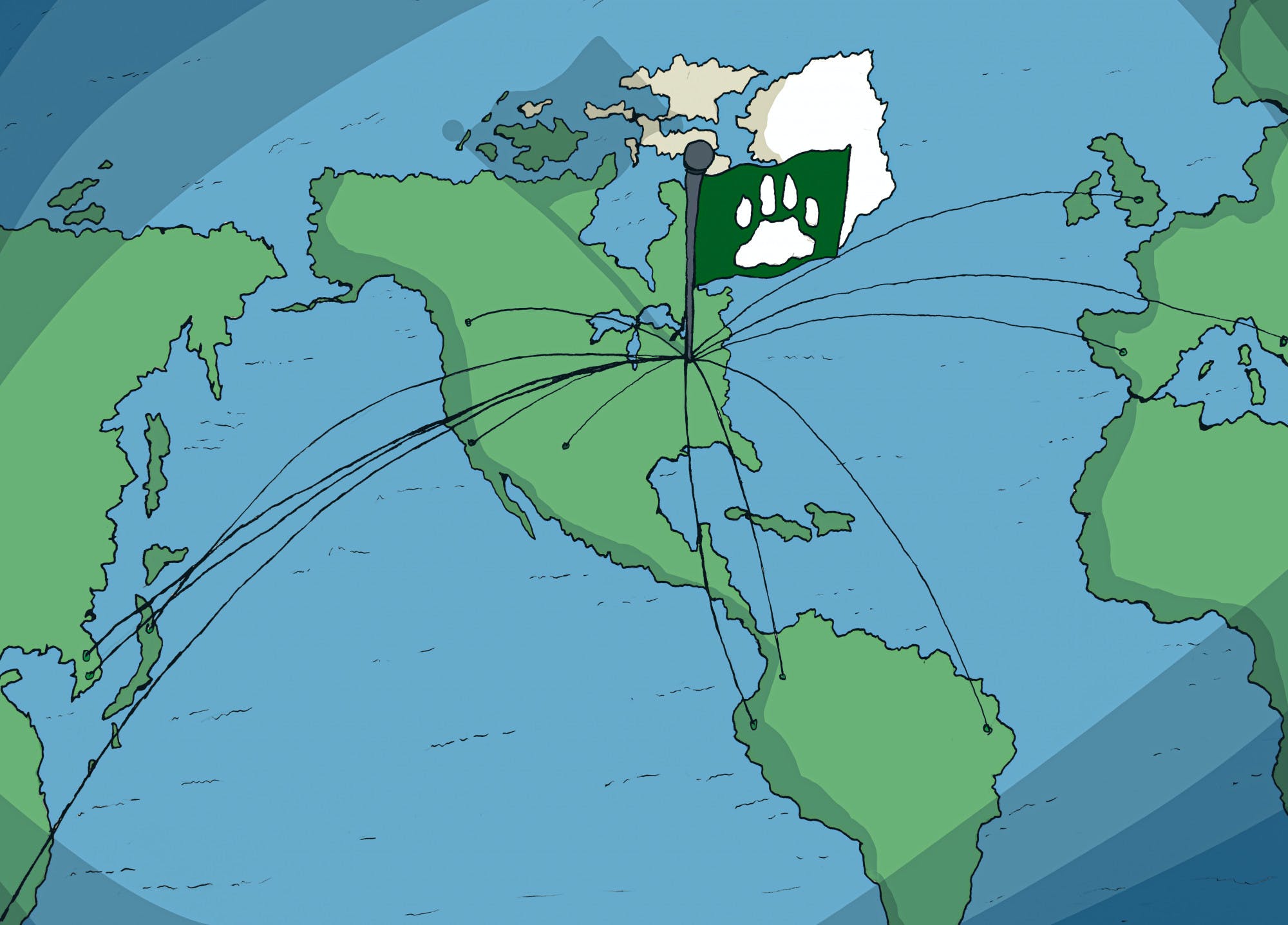 When people ask me where I’m from, I usually say Pittsburgh. But a few years ago, I would have struggled with that question.

I grew up as a Navy brat for a significant part of my life — pretty much all of elementary school. Being a “brat” means one or both of your parents were in the service. My dad was a helicopter pilot for the Navy and the best part about being a military brat is that you get to move – a lot.

I was born in Pensacola, Florida, but lived in places such as Norfolk, Virginia, San Diego, California, Guam and, finally, Japan for three-and-a-half years. Living overseas, I got the opportunity to have so much life experience at such an early age.

I crossed the world's busiest intersection. I learned origami and picked up Japanese phrases. I learned customs and visited temples. I even got to travel to other countries like Australia, China and Vietnam.

Now, I live in Athens, Ohio, as a full-time college student.

Athens is a relatively small town, with a population right around 25,000. It’s teeming with small businesses and 20-somethings as Ohio University’s campus is a major pillar of the community. But, it’s also one of the poorest counties in Ohio.

Including the student population, over 50% of Athens residents have income levels below the poverty line, according to the Athens County Economic Development Council.

It’s a stark contrast from living on a Navy base, and while I miss the “drop-everything-and-move” life I once had, it’s not because I don’t like where I currently live.

I love Athens, and I wouldn’t change any of the choices that led me here. I was thrilled when I got my acceptance letter into the E.W. Scripps School of Journalism on OU’s main campus.

And I’m not alone. Bridget “Bridge” Coffey had an ultimatum: If she wasn’t excited when she opened her acceptance letter from OU, she would join the military.

“And if I don't like it, the Navy's going to be there,” Bridge said.

Bridge, a senior double-majoring in global studies: war and peace and political science, was born in Yokosuka, Japan – the same place I had been stationed for over three years. Bridge is the oldest of four and has lived in Florida, Whidbey Island off Washington State, Hawaii, Maryland, Bahrain and finally, Columbus, Ohio.

“My parents always growing up called us the ultimate souvenirs,” she laughed.

When people ask her where she’s from, Bridge usually says her family is from Columbus. She doesn’t feel as connected to that area as some of her siblings, as she only spent two years there before coming to Athens for school.

However, deciding where to come to college wasn’t exactly easy for her either.

“Home is where the Navy sends you,” Bridge said. “I have to make a choice, and if I don’t like it, I can’t just be like, ‘Oh, well, I’m leaving … it’s a much bigger commitment.”

“It was hard and really overwhelming, just having the choice of picking where you’re going to go,” she said.

In areas like Maryland and Columbus, Bridge said she met people who had never left the area and while they were eager to hear about her international experiences, Bridge said there’s “always a flip side.”

“It’s not all sunshine and roses, you know?” she said.

For me, the flip side affected my hobbies. Since the age of three, I have been dancing. Now, many of the dancers I knew grew up doing competition dance have retained their skills even to this day. I’ve been left out of these conversations where my peers have bonded about their shared background, because this was never an option for me.

For Bridge, it happened after she established herself in travel softball. She wanted to play in college, but after moving to Bahrain, she described the experiences as just “different opportunities.”

“We moved to the Middle East, and they don’t have softball,” Bridge said. “I was the only girl on the baseball team and I picked up basketball, soccer, net ball. It was cool and I’m glad I got to do it, but coming back here, it was just too hard and too fast.”

Her younger brother, Kyle Coffey, had a similar experience. He started playing football in the fourth grade but had to give it up once they moved to Bahrain. Luckily, he started to play rugby instead, and still plays today.

Kyle, a sophomore studying communication sciences and disorders, said he always thought he would follow in his dad’s footsteps and join the military or some kind of uniformed service.

“Once we moved here to Ohio, this was the first time we’ve lived somewhere for more than four years,” Kyle said. “So, it was nice, just being in one place and knowing people and being able to grow with people.”

Kyle echoed Bridge’s sentiment about being close with her family, and said he was influenced to come to OU partially because of her. He said he misses the international foods the most, and being able to vacation in different places when living overseas. But, he likes the stability of Athens.

“When you walk through the streets … you get the sense that it’s been here for a long time, because it has,” Kyle said. “It just feels very solid and grounded. It’s not going anywhere.”

Now, he’s not in any rush to leave Athens.

“I remember, when I was thinking about coming to college, it was like, ‘I don’t want to do any more school, I want to get it done as fast as I can,’” Kyle said. “But now I’m here and I’m like, ‘OK, this is the last time in my life I really get to learn and grow.’”

Despite some of these trade-offs, though, Bridge and I agreed our backgrounds as former Navy brats shaped us into who we are today.

“It definitely honed a lot of what my personality is now, and the way I’m able to interact with people and be outgoing and extroverted,” Bridge said. “I find people easy to talk to, for the most part. And I like to think that people also find me easy to talk to. I feel like that has to do with me just having to do that, or else you’re never going to make friends.”

My experience in the Navy influenced more than just my personality, which I consider to be generally outgoing and extroverted, but my career choice too. Though English had always been my strong suit, choosing a job and major that I felt like I could travel in was important to me, because I wasn’t going to give that up from my past.

Luckily, I found that journalism was the perfect option for me, combining travel and the social skills I had worked so hard to cultivate throughout my life. Bridge said she was also considering OU for photojournalism because of her passion for photography.

“That’s all you have when you move every two years and you may never see people again, you want to remember,” Bridge said. “You take a lot of pictures.”

Both Bridge and Kyle worked with OU’s Veterans and Military Student Services Center, located on the third floor of Baker University Center.

Established in 2014, the Center aims to provide advocacy and advising on behalf of military students. For example, St. Peter said the Center has policies in place on what happens if members are activated or deployed to other countries.

“That dependent or a spouse may be impacted if they have to stop their education to take care of the family or to become the breadwinner,” St. Peter said.

St. Peter said the Center also provides resources such as raising awareness of military-affilated students on campus, memorials and a suicide awarness campaign for veterans. He estimated 3,500 students at OU are military-affiliated.

“We created a faculty and staff awareness training program to talk about some of the experiences that our dependents, spouses and veterans have had so they can harness those experiences in their classes,” St. Peter said. “They bring a wealth of knowledge, potentially of diversity (and) experiences if they’ve traveled across the country and moved across the globe.”

St. Peter, who served for over 20 years and did two tours in Germany, said it’s important to him that students are able to adjust to life in Ohio after they’ve been living overseas.

“We have students that are attending school here that have parents that are still serving overseas,” he said. “To have a network or to have a friendly face here that they can turn to … is important, and I get that.”

His daughter, Sara Coey, was born abroad in Germany and moved to Athens in the sixth grade.

“Ironically, I actually did not want to come to OU,” Coey said. “We had been in Athens for so long and I just wanted to get away for college … I really started to think about how crazy I would be to not accept free tuition because my dad works for OU.”

Coey, a 2022 graduate of OU who studied nursing, lived almost everywhere from Maine to Germany. When she first moved to Ohio, she felt like she didn’t quite fit in.

“Athens is a smaller community,” she said. “There’s really no other military families and everyone was born here, lived here and knew each other from preschool.”

She had her sights set on The Ohio State University first, but soon realized the Athens community was a better fit for her.

“I had grown up in Athens and it was just normal to me,” she said. “And then seeing how some of these other universities are — feeling like you would just be a number at a bigger university — really made me appreciate the size of OU.”

Coey said she loved the amount of student organizations there were at OU, and felt those helped her be closer to the community.

“I had never considered transferring because I found a couple organizations that I was really involved with,” she said. “I was also a learning community leader for three years. I really enjoyed showing new students OU and showing them everything OU had to offer.”

She encouraged students to not only get involved on campus, but spoke to the value of being involved with the Center.

“I met a lot of dependents who had never heard of the Veteran’s Center,” she said. “There's a lot of scholarships … They have a handful of student jobs to work in their office. I know the workers there love meeting students and actually getting to know them.”

Similar to me, Bridge doesn’t see herself living in the United States forever. He said she has tried to study abroad while in college three different times, but COVID-19 made her unable to do so. She misses the excitement and the uncertainty of being a military brat, she said, but is also focused on her passions now, including sexual and domestic violence advocacy and awareness.

She hopes to work a non-governmental organization job in the Middle East of East Africa that deals with these issues.