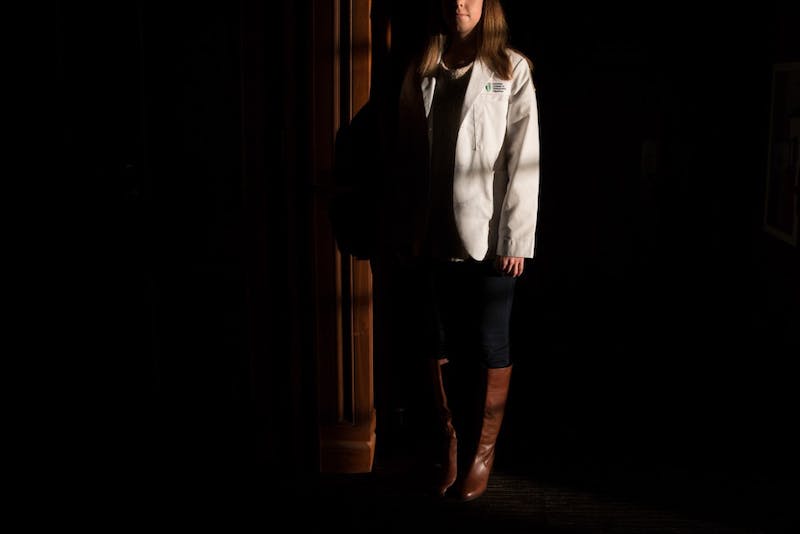 The Weight of the White Coat

Growing up in Glouster, Jennifer Gwilym dreamed of one day going to medical school to become a doctor.

She would be the first in her family to attend college; her father had once been a coal miner, and her mother worked as a billing clerk at OhioHealth O’Bleness Hospital. She prepared for years of schooling, coupled with hard work and immense studying, knowing there was not much money to send her to school. She graduated with $255,000 in student loan debt.

Dr. Gwilym, now an assistant professor of family medicine in OU’s Heritage College of Osteopathic Medicine and a voting member of the Committee on Student Progress, completed both her undergraduate and osteopathic medical degree at Ohio University and came back to Athens a little more than four years ago.

She says during her years of medical school, she internalized much of her stress — something she admits probably wasn’t the best for her. Now, in her position at OU, she wants to help students find balance in their own pursuits.

Students pursuing degrees in medicine often grapple with long hours, constant studying and high amounts of stress to accomplish their goals of becoming physicians or nurses. The pressure to be perfect — in the classroom and in the clinic — can lead to students turning a blind eye to their own health problems. 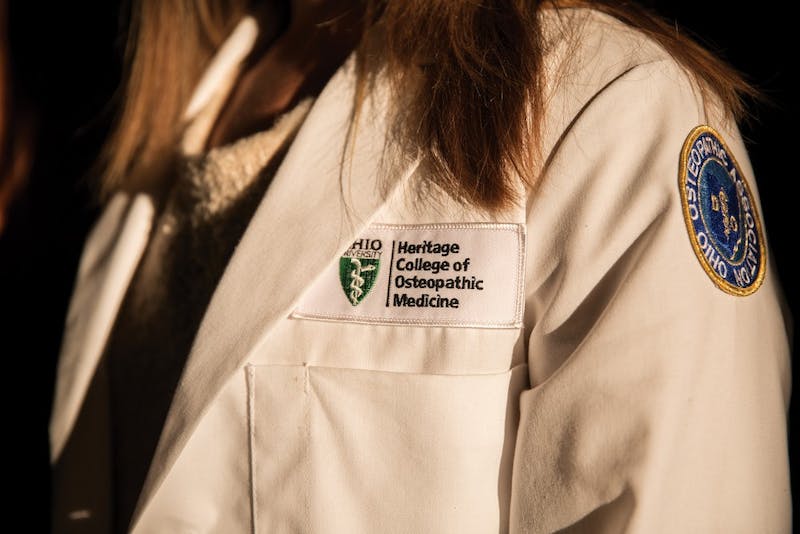 Melanie Worley, a second-year medical student, poses for a portrait inside the Heritage College of Osteopathic Medicine on Monday.

At Ohio University, medical students study within the Heritage College of Osteopathic Medicine, which is spread across three campuses: one in Athens, one in Dublin and one in Cleveland, where its program works out of Cleveland Clinic’s South Pointe Hospital in Warrensville Heights. Gwilym said there are 240 students per graduating class: 140 in Athens and 50 each at the Dublin and Cleveland campuses.

Within the program, students take an osteopathic approach to medicine, which focuses on the entire body and requires 200 additional hours of learning osteopathic manipulative medicine, focused on helping to “reduce pain, increase mobility and support the body’s natural functions and structure,” according to the school’s website

Each day for Melanie Worley, Alexandria DeFabio and Augusta Eduafo — all second-year medical students — looks relatively the same: wake up, work out if there is enough time, review course materials, learn more material, study and sleep.

Gwilym said students go through different “blocks” of study, where for a few weeks, students concentrate their time in a different body system, such as cardiovascular health, neurology and psychiatry. Worley said she has class for about four hours a day, and about 16 lectures a week. She said about every two weeks or so, she will have to take an exam.

Worley, DeFabio and Eduafo are all gearing up for the first level in their board exams. Students at OU must pass the first two levels of COMLEX-USA, or Comprehensive Osteopathic Medical Licensing Examination, to graduate, according to OU’s website. The third part of the exam is taken during a graduate’s residency. 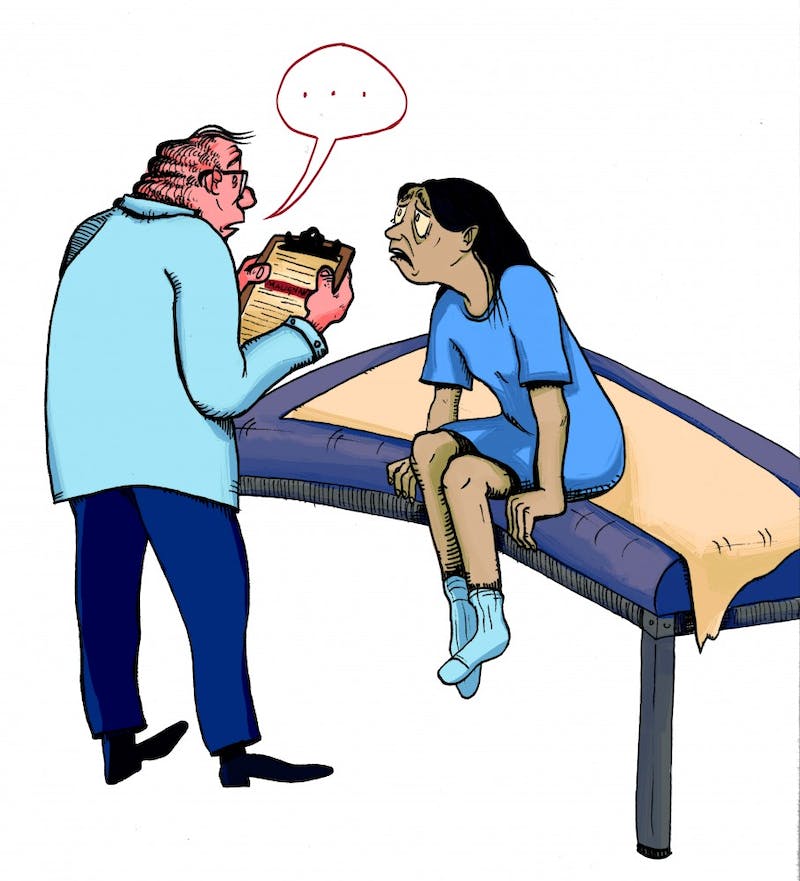 Students can also take the USMLE, or the United States Medical Licensing Examination. Worley said students are told to begin studying for board exams in January — or even sooner. They take their exams at the end of the academic year.

During their time in school, medical students are also applying for the internships that will lead to residencies and fellowships after their degrees, which adds new and difficult stressors with each step of the process, Gwilym said.

The first year for medical students is probably the most challenging, Gwilym, who is also part of the selection committee for new students, said.

“That’s the year that we see the most students come before the committee on Student Progress, and I think that’s due to the transition,” she said. “Second year, everybody starts to get stressed out again toward the middle of the year — right about now — because they’re getting ready for boards."

After passing the first level of their boards, students will spend their third and fourth year practicing medicine in a practical setting.

In a 2010 study published in the Archives of General Psychiatry, a sample of 740 medical interns about to enter residency programs across 13 U.S. hospitals saw an increase of more than 20 percent in criteria for depression and a 370 percent increase in thoughts of death.

According to a psychiatric article published in Journal of the American Medical Association in May 2015, “medical training involves numerous risk factors for mental illness, such as role transition, decreased sleep, relocation resulting in fewer available support systems, and feelings of isolation.”

Worley said she spends some weekends studying for 12 hours at a time and has seen her peers lose sleep in order to study. Gwilym said some medical students and physicians even self-medicate in order to deal with the stress and pressure of their jobs.

And, more often than not, a doctor will put a patient’s health ahead of their own.

“I’ve had patients be angry when I’ve called off sick when I’ve had the flu, and I’m vomiting and can’t get out of bed,” Gwilym said.

In the past, Gwilym said some state licensing organizations have required doctors to report any mental illness and resulting treatment. She said, thankfully, when she recently renewed her license in Ohio, it was without severe scrutiny, which can lead to less reporting or a fear of being penalized for mental illness. 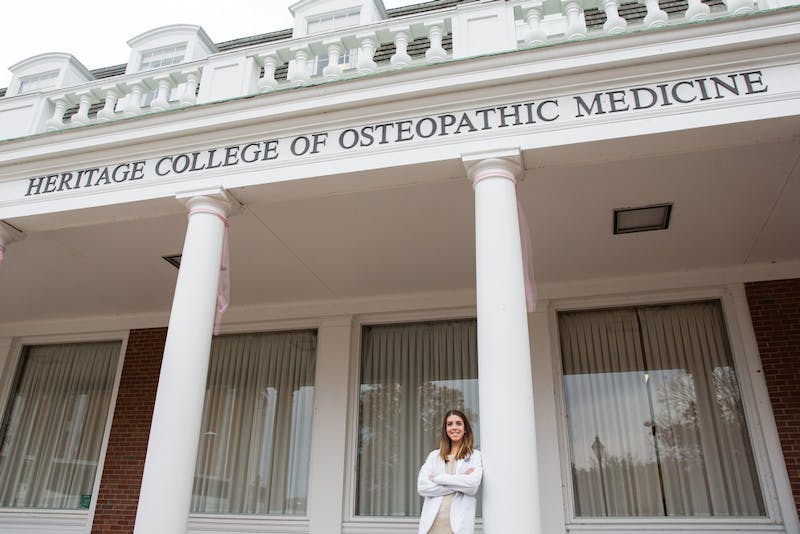 Melanie Worley, a second-year medical student, poses for a portrait outside the Heritage College of Osteopathic Medicine on Monday.

Between 300 and 400 physicians kill themselves annually in the U.S., according to the American Foundation of Suicide Prevention. The actual rate of physician suicide could be higher, though, Gwilym said.

There are a number of problems that can lead to high stress and suicide rates among students and physicians, Gwilym said, including the large financial cost associated with education, patient rotation and a demand that can feel like an “assembly line,” coupled with the constant worry of “being sued on a daily basis every time we touch a patient.”

Knowing that pressure first-hand, Gwilym organized the Athens event for the National Day of Solidarity to Prevent Physician Suicide on Aug. 20, which included a candlelight vigil and speakers who presented on mental health and suicide.

A new group on campus, Medical Student Assistance Program, “assess well-being of any student that we think might be emotionally struggling or have a substance abuse problem,” Gwilym said.

Eduafo said the university attempts to combat stress among students with programs such as “Mindfulness Tuesdays,” where students can take 45 minutes to learn about tools such as meditation. However, she said that should not be the only programming.

She said she is looking into how stress impacts medical students as a research topic for the future.

“In med school, they don’t really teach us how to deal with stress, really,” Eduafo said. “That translates into mental issues later on when you’re a physician because it’s a very high-(stress) job.”

Eduafo said what’s nice about OU’s program, though, is that all of the lectures are recorded, and students can choose to go to class or watch the lectures on their own time.

Eduafo said that allows students to study at their own pace, or skip over the work that they already have learned — something that has come in handy for her, considering she has an undergraduate degree in physical therapy from the University of Dayton, and a master’s degree in anatomy from Wright State University.

While the coursework can seem daunting, all three students said balance is immensely important in their lives. Eduafo has found that balance in fitness classes, YouTube videos and in television shows. Worley found it in running. DeFabio said she decided to work through medical school as a “house mom” at the Alpha Delta Pi sorority house while also working at Alden Library.

Worley said when she tells other people that she is studying medicine, she feels like people respect her for her choice. But, she said it’s important to remember that “med students are human, too.”

“We all have our things that we need to work on,” Worley said. “Doctors aren’t perfect. No one’s perfect, but we definitely want to do our best to help others and really make a difference in people’s lives.”