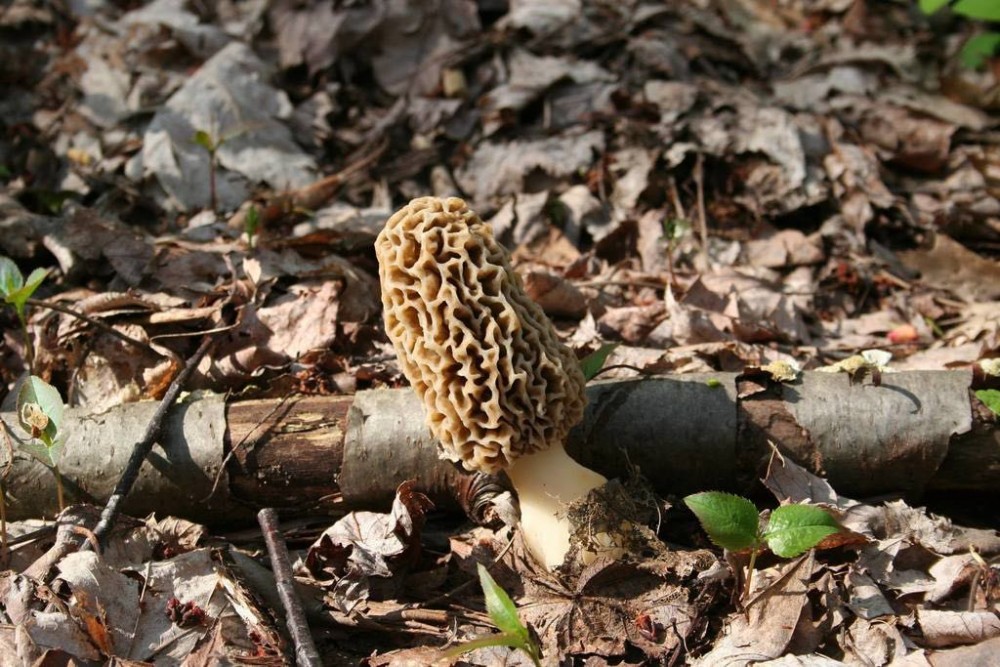 The Morals of Morels

For some people, family traditions include eating Sunday brunch or going to a state fair. For others, it will include walking through the woods in search for mushrooms.

Mike Hopkins has been hunting morel mushrooms for over 31 years. His father and grandfather hunted and took him along when he was 6 years old. He said he hunts as much as he can outside of work.

“(I carry it on) just because of all the wonderful memories I had as a child,” Hopkins, who lives in Springfield, said. “I enjoyed it myself as I grew older, and I love eating the mushrooms. Never going to quit until I can’t hunt them anymore.”

Allen Roe views mushroom hunting as a spiritual time for him.

“It’s getting in the woods and going off quietly,” Roe said. “Some people go to church to be close with God. I go to the woods. That’s where I feel closer to everything around me. In general, morel hunting is calming. It’s peaceful.”

He lives near Dresden and has been hunting mushrooms for over 35 years, beginning when he was 5 years old.

“They’re very hard to grow; therefore, wild is the main way they are found,” Roe said. “For it’s more about spending time in the woods. It’s about getting away from the crazy, hectic, everyday life. And there’s the benefit that they are delicious.”

For Troy Eden, the smell of spring brings back memories. He spent 27 years in the military and said it was nice to come back to the Athens area in the springtime.

“Wherever I was at, I’d at least try to get back this time of year for mushroom hunting because it reminds me of home,” Eden said.

Today, he lives near Beavercreek. He’s been hunting mushrooms for 42 years after his family got him into it.

“It has to be thousands of hours that I’ve spent in the woods since I was a little boy hunting mushrooms,” Eden said. “It has helped create a passion of wildlife conservation and preservation of our national and state parks. It’s great family time.”

Don King was not born into a family of mushroom hunters. He discovered it 15 years ago when he saw someone on a PBS cooking show go into the woods and gather mushrooms to cook them.

Several years later, King bought an identification book for mushrooms. He found morels that were growing by his house and soon cut them.

“It actually took me several days to work up the courage to eat them, even though I was fairly certain what they were,” King, who lives near Kent, said. “This was before it was easy to get identifications on Facebook. It was actually before Facebook even existed, and there were few online resources for mushroom identification.”

Once he worked up the courage to eat them, he said they tasted amazing, and it made him feel much more confident to look for more.

King has been able to turn his passion for mushrooms into a business. He is known as The Mushroom Hunter and has a Facebook page with more than 10,000 followers. He also takes people on hunts and does weekend hunting and camping trips.

He said he takes people to hunt for two to three hours and then will take people camping for an entire week, about four to six times per year. When he’s not teaching, he is hunting on his own, which is about five to 10 hours a week.

“There’s such an interest out there, and people are afraid to do it on their own,” King said. “For the first couple of years, it was not very successful. I had maybe half a dozen people interested at the most. And at some point, it just sort of blew up.”

Mushroom hunters often have fierce competition with each other and keep their mushroom locations extremely secret. It’s common that people will pass on the locations from family member to family member, Roe said.

It often depends on the day for how many mushrooms Roe will find. Sometimes he has found two, other times 200. It is all about where he looks.

The trick to mushroom hunting, Eden said, is that someone must “look up to find them down.”

Eden will search for certain trees.

Morels grow in two different ways: saprobic and microrisal, King said. Saprobic mushrooms decompose dead matter, which is why morels can be found by dead trees. Microrisal mushrooms grow in a symbiotic relationship with living trees. 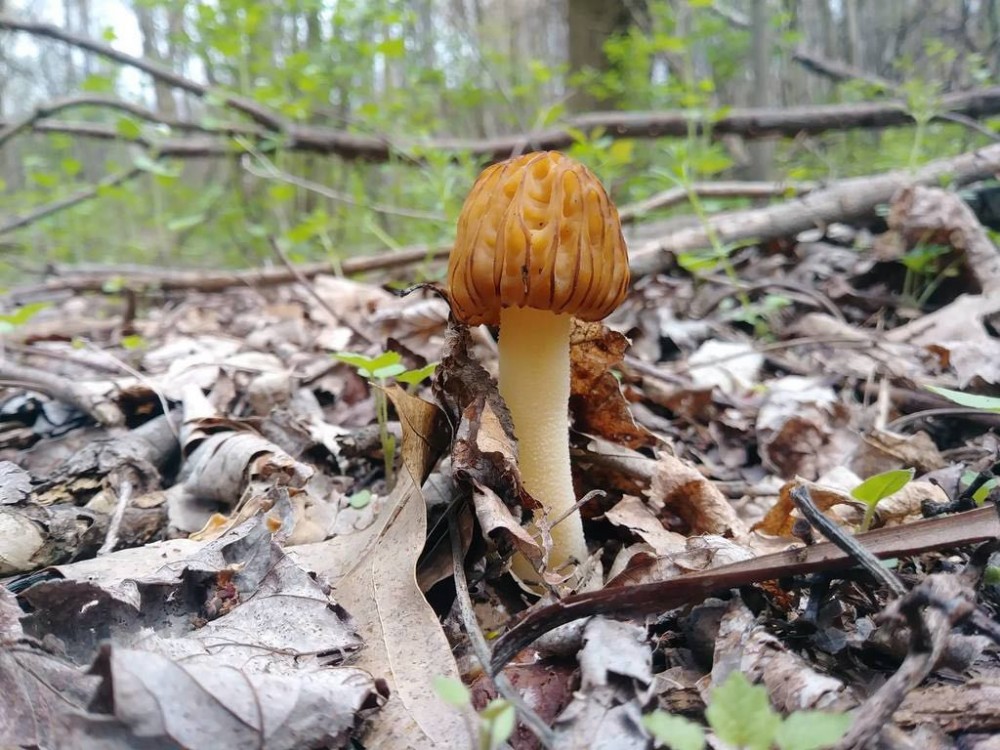 Roe said he looks at elms that are dead but still standing. When searching, he looks for the stem because they are white and will stand out more so than the brain of the morel.

“If you can find a dead elm where the bark is slipping, you have a higher chance of finding them than in just walking through the woods,” Roe said.

Tyson Bolin hunts for morels because he likes the taste. He’s from Meigs County and will hunt about three to four times per week.

He said he once found 87 morels underneath one tree, each the size of a soda can.

“Everyone has their secret spots,” Bolin said, chuckling. “What I’ve found out is that the spots die out, and they’re not consistent. They might be good one year, but then the following year they won’t be as good. You’ll have to find another spot.”

Soil temperatures are also said to be a factor for when mushrooms come out. Hopkins said that ideal temperature is around 55 degrees Fahrenheit. He said he has had his best hunting in central Ohio.

Eden said that morels typically start their season in Georgia and move north. He has a trip scheduled this season to both Tennessee and Illinois to hunt.

“I have tasted variations, and I think Southeastern Ohio mushrooms taste different than western Ohio,” Eden said. “Depending on the soil composition, you get different flavors.”

Hopkins said he also hunted oyster mushrooms. They grow on trees from late summer through the fall, and he will fry them. They can be tan to white-colored and have a fishy smell.

Eden said he not only searches for different variations of morels but also for horsetails and chicken of the woods.

“My wife and I have taken several outdoor courses, so when we go through the woods, we’ll pick all different kinds of things,” Eden said. “Nettles, like the stinging kind of nettles, we will boil them and make quesadillas out of them.”

King said he stresses to people who hunt that morels are not the only mushroom that can be found in the woods.

“When I seriously think about morels and their overall flavor and the culinary aspects, they’re not even in my top 10 favorite mushrooms,” King said. “I’ve tried over 80 different species of mushrooms here in Ohio. The more really great mushrooms I try, the lower on the list morels go.”

Once morel season ends in May, King said he looks forward to continue hunting other species.

“I’m not sad when morel mushroom season ends. I’m actually excited because I know that in summer and fall, there will be many, many more species in different varieties,” King said. “I don’t get depressed about mushrooms until the end of November.”

When he’s not hunting mushrooms, he’s involved in a lot of different Facebook pages dedicated to mushroom hunters and will do his best to debunk myths.

He said that it is common for people to believe that the mushroom should be cut from the ground, but really, it is OK to remove it.

“Mushrooms hunting, if done properly, is 100 percent sustainable,” King said. “Plucking mushrooms out of the ground does not harm the actual organism and does not affect future production of those mushrooms.”

The morel has a look-alike, called the verpa bohemica, or false morel. It looks the exact same as a morel, but it is toxic.

Hopkins said the gyromitra mushroom is another type of false morel and looks like a big, red brain.

He recommends that beginners take someone with them who can identify the different kinds.

“The big thing is that if you cut a morel down the middle, good morels will be hollow inside,” Hopkins said. “If there’s anything in the stem or cap, then there’s a false morel, and I wouldn’t eat it because it could be toxic.”

Eden said he and his wife make spore tests by putting the mushroom on a white piece of paper and counting the spores after a few hours. The spore count determines the toxicity of the mushroom.

Once Roe brings the mushrooms home, he cuts them up and soaks them in salt water.

“Anything you bring home from the wild is going to have wild on it: bugs, dirt, etc. I soak them 24 hours in salt water,” Roe said. “The salt water kills bugs.” 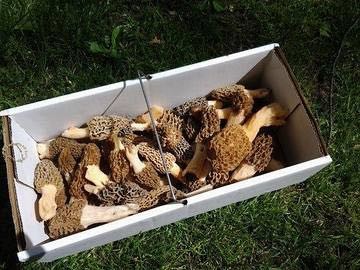 During mushroom season, his refrigerator is often filled with bowls of salt water and mushrooms.

“My wife will complain because she will go grocery shopping and not have room for the groceries,” Roe said.

“You can cook them about any way you want,” Bolin said. “We like to fry them, put them on pizza, put them in lasagna or spaghetti. It’s like a regular mushroom.”

King said that he will eat the vast majority of the mushrooms he finds himself, or he will dehydrate them to use later. He will also take extras to farmers markets and barter with them.

“Since selling wild mushrooms is technically not legal on a commercial scale in Ohio, I basically take small bags of them to my farmers market, and I’ll barter with other vendors there,” King said. “I’ll barter to get meat or veggies or eggs or things like that. But mostly I cook them for myself and friends and family.”

Roe said he absolutely will not sell his mushrooms. If he has surplus of more than he will eat, he will freeze them. He also will take some to his grandmother.

“My favorite thing to do is to wait until there’s three inches, four inches of snow on the ground and send my friends a picture of my fried mushrooms on my plate,” Roe said. “They’re always so jealous when I have mushrooms in the winter.”

Some people also have traditions when looking for morels.

Eden said he has a mushroom hunting stick that is carved like a cane. He always takes it with him into the woods.

“I’ve had this cane with me for 20 years,” Eden said. “I think it’s put as many miles in the woods as I have these last 20-something years. I guess it’s lacing up a comfortable pair of shoes and getting comfortable with it.”

Roe said most people will hunt with a photo of a mushroom.

“Every mushroom hunter has a picture of a mushroom that they have found,” Roe said. “They have it on their phone, and when they’re in the woods, they’ll look at that picture to refresh that image in their mind, and then they’ll go looking for it.”

Bolin said he puts his mushrooms in a mesh bag, or an onion sack. It is to help the spores fall off and replant new mushrooms while he is walking through the woods.

Hopkins said his dad looks at the moon, but he himself doesn’t because he considers himself not superstitious.

“My favorite thing to do in my life is to go mushroom hunting,” Hopkins said. “It’s because I love being out in nature. It’s the time to be with yourself and also you get to enjoy the fruits of your labor with my most favorite delicacy. As far as food goes, it’s the morel mushroom.”