Athens does the ‘Time Warp’ again

T he familiar sounds of “Hot Patootie” and “Time Warp” mixed with the sight of fishnet tights and red lipstick can only mean one thing: The Rocky Horror Picture Show is back in Athens and ready to rock again.

For years, the Lost Flamingo Company, or LFC, has hosted a shadow performance of The Rocky Horror Picture Show, featuring a full cast of Ohio University students with the original 1975 cult classic film playing in the background.

Raven McClintock, a senior studying psychology, is the director of fundraising for LFC and is directing Rocky Horror this year.

“It’s hard to pin down what the story is about, but I think when you come to this show, you can create your own meaning as an audience member,” McClintock said. “I’ve never seen a show like this before.”

Rocky Horror’s rich history and traditional elements create an immersive experience for the actors and the audience.

To fully understand what LFC members call the “unforgettable experience” that is Rocky Horror, it’s important to dive into the show’s history, meaning and the “superheroes” that went into creating the Athens version of the production.

Rocky Horror is a comedy and horror musical film that quickly became a cult-classic. It follows a couple who gets a flat tire during a storm and seek shelter in the nearest house they can find. It just so happens to be the residence of Dr. Frank-N-Furter, a “sweet transvestite” scientist set on creating a gorgeous man and his strange associates.

Nathan Stanley, a sophomore studying music education, is the public relations director for LFC and is portraying Dr. Scott in Rocky Horror.

“Being a part of the show has really taught me a lot about myself and others and about vulnerability, which is amazing,” Stanley said. “It makes you feel really good about yourself in a way that you never thought you could because you’re in such a vulnerable environment.” 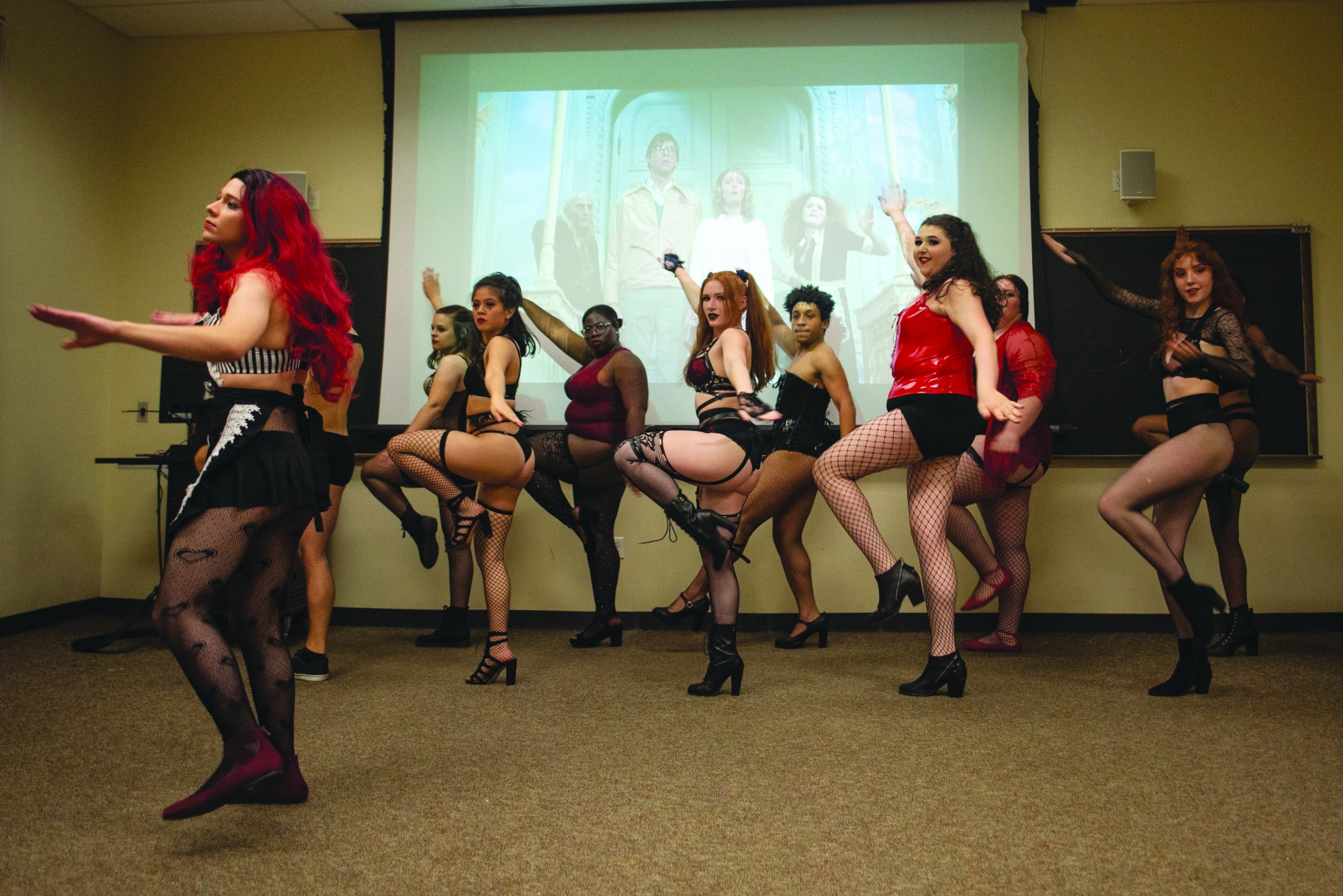 The Lost Flamingo Theatre Company rehearses for it's production of The Rocky Horror Picture Show on Tuesday, October 29, 2019, in Bentley Hall. 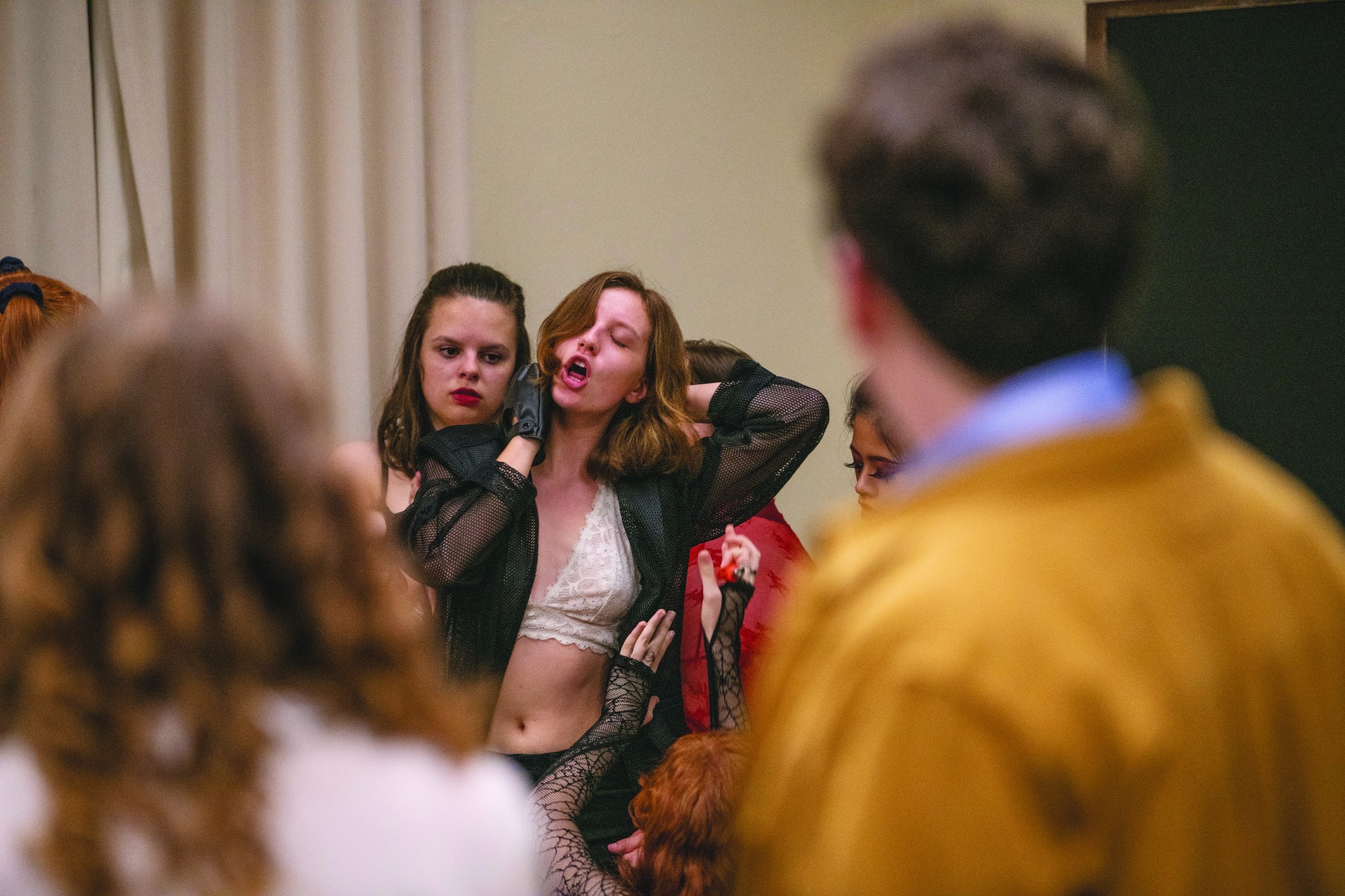 Emily Kraushar rehearses with other members of the Lost Flamingo Theatre Company for the production of The Rocky Horror Picture Show on Tuesday, October 29, 2019, in Bentley Hall. 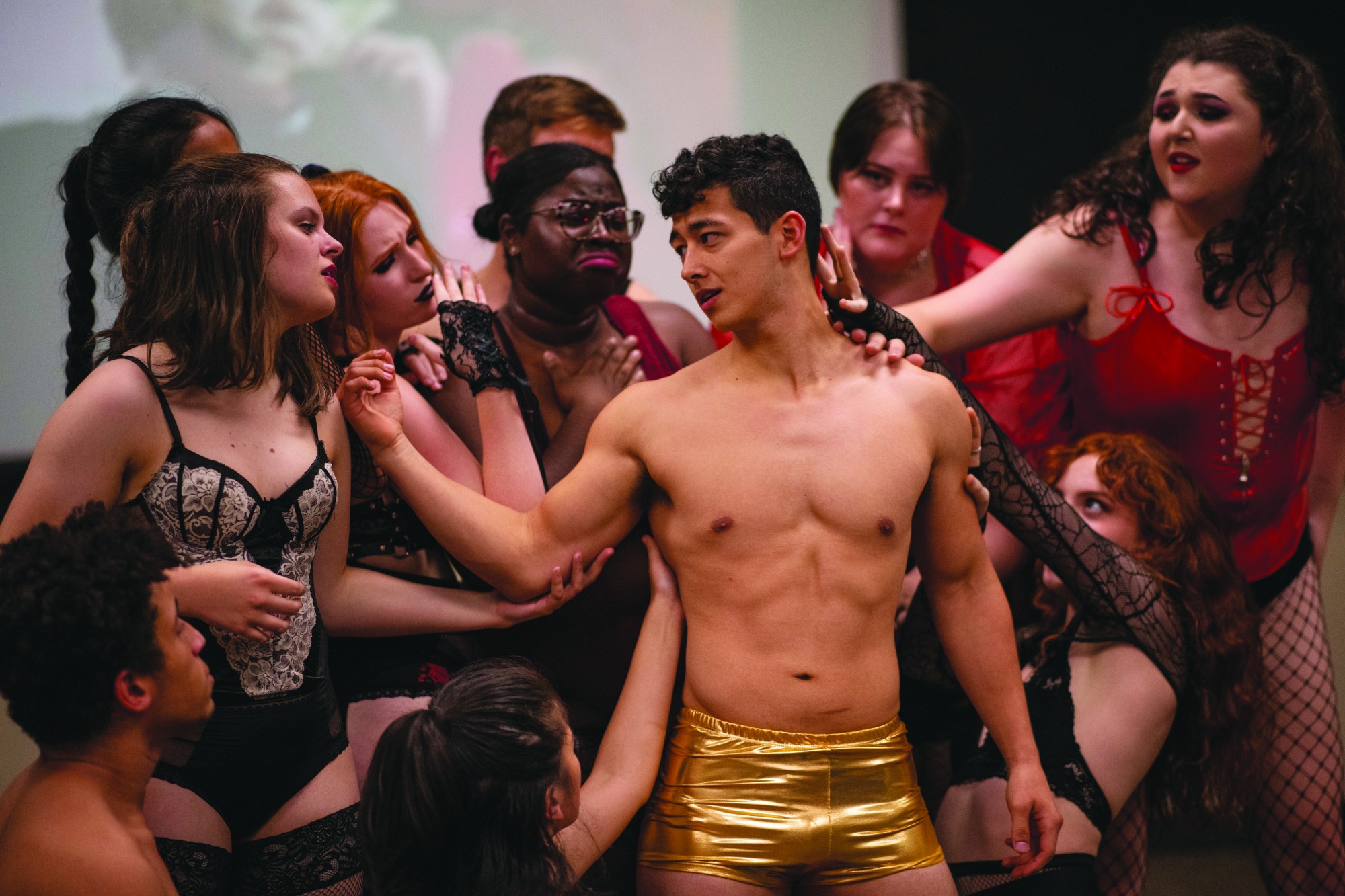 Members of the Lost Flamingo Theatre Company rehearse for their production of The Rocky Horror Picture Show on Tuesday, October 29, 2019, in Bentley Hall. 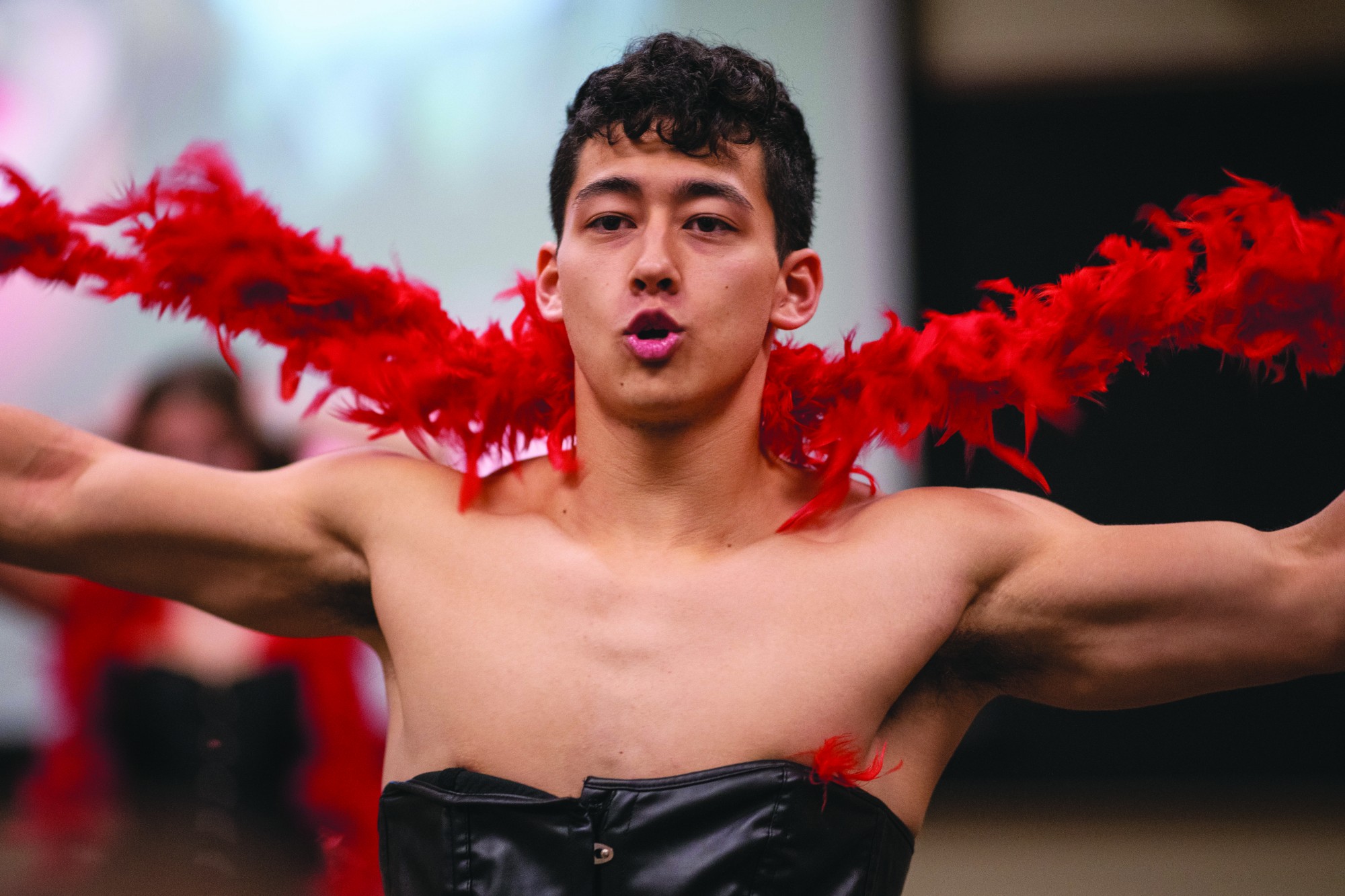 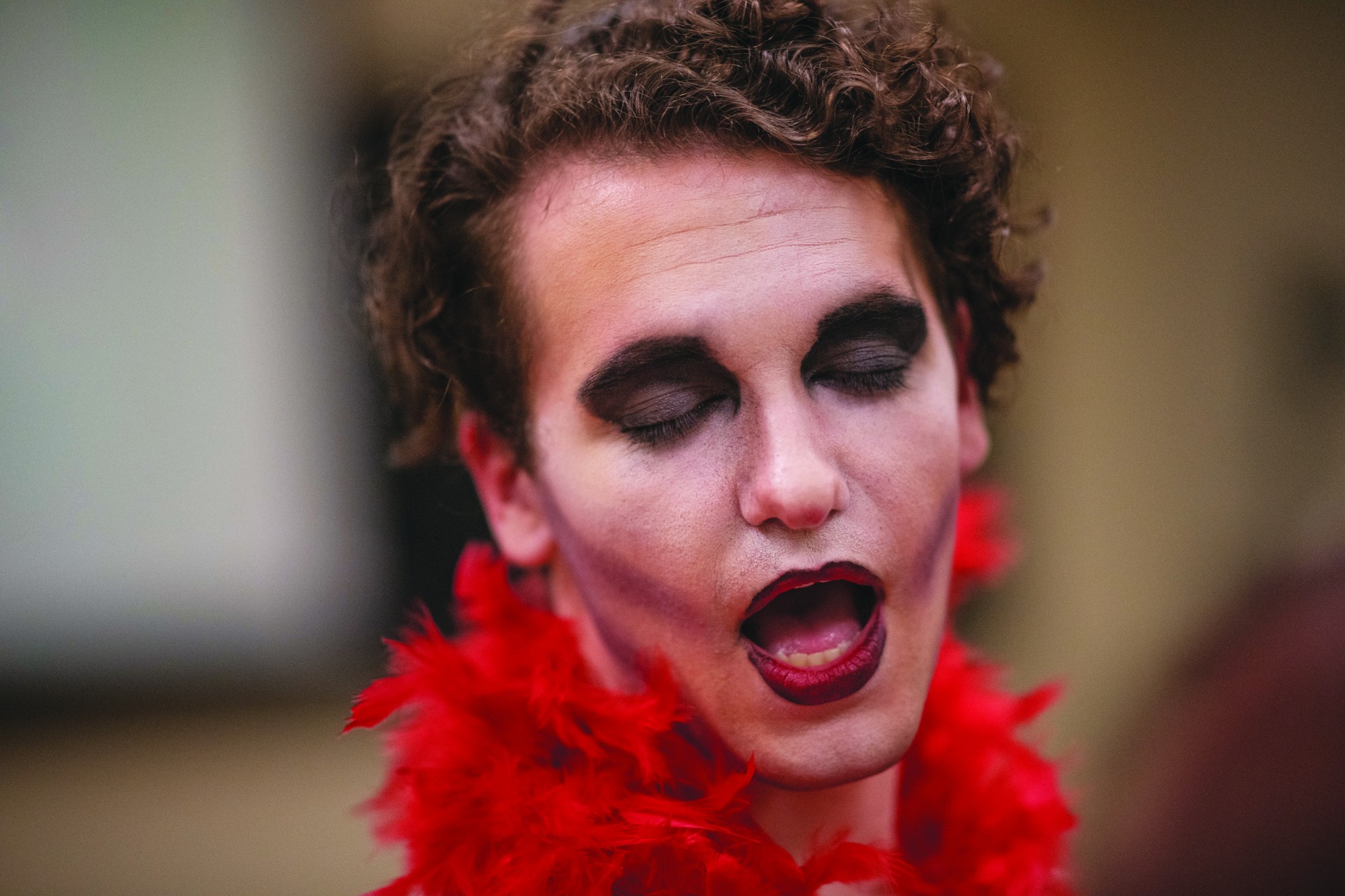 Instead of the iconic “Double Feature,” LFC has three dates for Rocky Horror. The show will open Thursday, Oct. 31, at The Union, 18 W. Union St., and run Friday, Nov. 1, and Saturday Nov. 2. Doors open at 9 p.m., and the show begins at 10 p.m., but audiences should line up around 7:30 p.m. to secure a ticket before the venue reaches the 300-person maximum capacity.

LFC’s production of Rocky Horror is different than most stage productions in that it’s in shadow format. The film version plays in the background while the actors mimic most of the actions in a live performance. LFC’s version also practices gender-blind casting, casting some women in male roles and vice versa. Members of the production highly encourage the audience to utilize the show’s callouts, where audiences can participate by responding to specific lines or characters in the production.

Marrin Eighinger, a junior studying restaurant, hotel and tourism, is the assistant director for Rocky Horror. She loves watching the cast bond together and experiencing the “come as you are” environment of the show.

“I think the shadow cast performance is such a unique concept, and the performing space adds to the energy of the show,” Eighinger said. “I also like how welcoming of an environment it is. it’s very come as you are, nothing to be ashamed about who you are.”

Though Rocky Horror serves its purpose as entertaining, the production also carries a deeper message of self-love and acceptance, preaching the mantra “Don’t dream it. Be it.”

“I saw it my freshman year when I was involved with another show, and this show opened me up to being a lot more confident in who I am as a person and also body confidence because I’ve always struggled with my body image,” McClintock said.

Though Athens residents and OU students may know about the long-standing tradition of Rocky Horror, not everyone knows about the brains behind the operation: LFC.

“Over at the Frankenstein Place”

LFC began in the early 2000s and is OU’s only student-run theater group. The group was founded on the pillar of creating a home for all of the misfits, or “lost flamingos,” on campus. Normally, the group has 80 to 90 members each semester, but as of the fall of 2019, they have over 100.

Each semester, the group puts on four productions. Typically, the four productions consist of three plays and one musical, but every fall, the musical slot is occupied by the group’s most popular production, Rocky Horror.

Aside from Rocky Horror, LFC will show Hand To God, Too Much Light Makes The Baby Go Blind and 12 Angry Jurors.

Michaela Chilenski, a senior studying media arts and studies, is LFC’s president, having been involved with the group since her freshman year, and is directing Hand To God.

“We try to make everyone feel comfortable and welcome, and especially this year, that’s our biggest goal,” Chilenski said.

“The little things we do to improve the company slowly make it more welcoming to people and just make it feel like a home for people who want to find a little corner here-- We want to take all of the lost flamingos and give them a home.”-Michaela Chilenski, president of LFC

The group votes on shows together after the scripts are approved by a script reading committee. Each semester’s production lineup is meant to find a balance between comedy, drama and historical genres.

Because the group is student-run, the students are solely responsible for planning every aspect of their productions. Students have to balance being in and directing the shows along with finding a space to perform and fundraising. Everything falls on their shoulders.

A lot of the fundraising for the club comes from the Student Activities Commission, but LFC members also hold their own fundraisers, like bake sales. In preparation for Rocky Horror, LFC is stationed at the top of Baker Center, selling stickers and T-shirts.

They also have a “Flamingo Friends” program, similar to a sponsorship program, where family and friends can donate and receive different benefits for pledging certain amounts. The other main fundraiser comes from their ticket sales, where students or Athens residents can pay $5 per show or pay $10 at the beginning of each semester to go to all of the shows. Rocky Horror is no exception, with a $5 ticket price and a $2 cover charge for people under 21.

Riley Perone, a senior studying commercial photography, is LFC’s vice president and has been involved since the first semester of her freshman year.

“Most of my close friends are in LFC,” Perone said. “It also allows people that wouldn’t be able to do theater a chance to perform, since it’s the only student-run theater company at OU. It’s just a good time and a fun little community to be a part of.”

Chilenski and Perone have loved watching LFC grow during their time at OU and believe everyone should get involved in some way.

“The little things we do to improve the company slowly make it more welcoming to people and just make it feel like a home for people who want to find a little corner here,” Chilenski said. “We want to take all of the lost flamingos and give them a home.”

More than just the “Time Warp”

Everyone involved in the club can agree that LFC is more than just its productions: it’s a place full of individuality, acceptance, friendship and love.

“Theater is one of those arts that only lasts for a moment, so it makes it so special when it happens,” Perone said. “You can’t get that with other forms of art, so I think theater in general really unites people, and especially for those who did theater in high school, being able to continue with it in college is really rewarding.”

McClintock, Eighinger, Stanley, Chilenski and Perone all agree that the most rewarding part of being involved with LFC is forming those special connections with other people and being a part of a club that allows non-theater majors to express themselves artistically. They agree that the best way to express self-love in every aspect is through Rocky Horror.

“The biggest thing is that it’s super body-positive; it’s a safe space for people to be in, and I think that aspect is super cool,” Chilenski said. “Everyone is there just being confident: every body shape and sexual orientation. Everyone is super open and accepting, and I thought that was an amazing feeling just to feel so empowered.”

McClintock will pass the Rocky Horror director’s torch down to Eighinger, who will take over the position next year. Eighinger loves seeing the show’s roots come alive in new and exciting ways year after year.

“It’s important to bridge the two together because I think sometimes we can get lost in what OU is doing, and it makes us lose the sense of community with Athens,” McClintock said. “This production does bridge the two physically but also bridges them in regards to acceptance and love.”

Just as Rocky Horror is an LFC tradition that never gets old, the show’s message of individualism and acceptance also refuses to age.

“Rocky is very special in the fact that it’s a lot of people in a very vulnerable environment,” Stanley said. “But I think what is so special about this show is that people can be who they want to be. You can present yourself how you want: modest or sexy, and however you want to come, Rocky will accept you, and Rocky will make you feel good about yourself.”