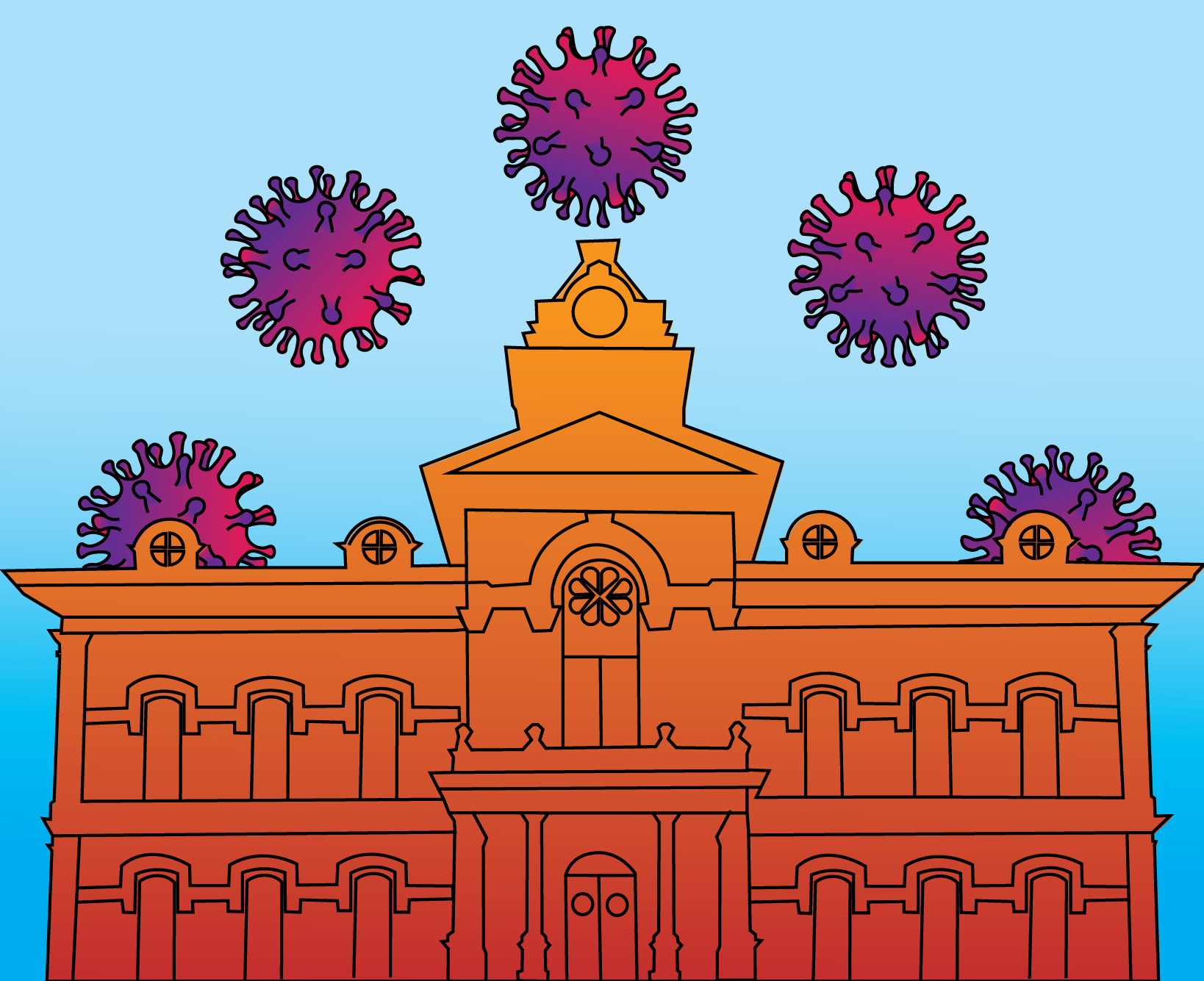 How local law enforcement is adjusting to the coronavirus pandemic

Captain Ralph Harvey has lived in Athens his entire life and has worked for the Athens Police Department for 23 years. Since the start of the coronavirus pandemic, he has never seen Athens quite like this.

There has not been a lot of activity in Athens since most students have moved out of their off-campus housing and plans for fests and other city events have been canceled.

“We've never dealt with something exactly like this,” Harvey said. “We've dealt with a number of different crises, but they're generally short. Even blizzards don't last weeks.”

He said it reminds him of when Ohio University was on the quarters system. During the summer, there was an intercession where the level of activity in the city went down since students would leave campus, and permanent residents would go on vacation.

There is still work for all law enforcement departments, even with less activity in Athens, and changes have been made to ensure the health and safety of residents.

Some of the APD administrative staff have been doing their work from home and only coming into the department when necessary. Harvey and APD Chief Tom Pyle each work half the week from home so they are not in the office at the same time and limit contact with patrol officers to avoid any spread of COVID-19. This way, Harvey and Pyle can work as patrol officers if current officers get sick, Harvey said.

Pyle is also working as the acting safety service director while remaining as the APD chief. Director Andrew Stone was called to service for the National Guard prior to the pandemic and is now assisting at the state level in response to COVID-19. The department had plans for Pyle to fill the position before the pandemic so it would not disrupt the service for the city.

APD has not scaled back on patrol in Athens but has added additional precautions. The number of officers on patrol have remained the same with the exception of less overtime since large weekends, parades and fests are canceled.

The Ohio University Police Department is still on patrol every day but is carefully coordinating office duties to social distance when possible, OUPD Lieutenant Tim Ryan said in an email. Staff, such as administrative employees and investigation personnel, are working from home when they can.

Officers take turns and coordinate times when they are in the office to eat lunch and to write reports to practice social distancing as much as possible. Access has been restricted to the OUPD’s communication center, and appropriate cleaning supplies are available to be used before and after working at each computer station and cruiser.

The Athens County Sheriff’s Office has divided officers into Team A and Team B so there will still be officers to work in case some officers have to be quarantined. Officers are also provided with masks, gloves and a lot of hand sanitizer.

Detectives remain on standby, and the administrative staff has been only working four hours a day in the office and the rest at home. People can still report to the sheriff’s office and are able to do CCW background checks and sheriff sales, which are administrative things required by law to get done, Sheriff Rodney Smith said.

Next week, the sheriff’s office is going back to eight hours a day of work in the office but will still use lots of precautions and follow the guidelines set by Gov. Mike DeWine.

The prosecutor’s office has also reduced the amount of in-person work since the suspension of the grand jury has put the office at a standstill. Since March 23, only 20% of the staff has been working in the office, Athens County Prosecutor Keller Blackburn said.

Next week, the staffing will begin to increase in the office since the backlog of work has been increasing. Blackburn said changes will have to be made to the way things were done in the past in order to ensure the safety of everyone. Contact in courtrooms will be limited, and more time in between hearings will have to be longer so cleaning can be maintained.

“We want to keep our community safe,” Blackburn said. “We won't be able to set courtroom hearings every 15 minutes.”

Protecting the people of Athens

Harvey said APD has made changes to protocols both internally and externally to ensure the safety of workers and residents.

“We don't have the volume of calls that we've had in the past, but we still have serious calls. We're still handling things we're doing as much as we can to mitigate contact with lots of people, including each other,” Harvey said.

The front doors of the department are locked. People have to ring the buzzer if they need assistance, and an officer will be sent outside to speak with them. The department is still taking calls for reports and will respond to calls for assistance. People can even submit a report through email if that’s what they are most comfortable with, Harvey said.

“We're trying to use those options, a lot more than we have in the past,” Harvey said. “We don't want you in the perception of we're trying to ignore things or do not do the due diligence that we should for reports.”

OUPD is still continuing to work even though campus buildings are closed and only about 150 students remain living on campus in residence halls. OUPD is also taking reports both over the phone and in-person. Ryan said officers are shifting their attention toward the protection of property since there are fewer people around to report suspicious activity.

“For most minor crimes a phone call is sufficient and preferred,” Ryan said in an email. “When reports need to be taken in person, officers will do their best to maintain at least six feet of distance from the reporting party(ies).”

“We're just trying to mitigate as much of a risk as we can, but at the end of the day, you know we just want to reassure people that we're out there."-Sheriff Rodney Smith

The sheriff’s office still has officers and first responders out in full force, Smith said. The officers respond to emergency calls and maintain social distancing when possible. If fewer people are needed to handle a situation, only one or two officers are sent to control the situation.

“We're just trying to mitigate as much of a risk as we can, but at the end of the day, you know we just want to reassure people that we're out there,” Smith said.

The work of the prosecutor’s office may be limited, but they have found other ways to work to keep moving forward. There has been limited hearings for people who are incarcerated for things like bond hearings and arraignments. Blackburn said they have also used this time as an opportunity to negotiate deals with the defense council.

Blackburn said the office is still expected to have the same number of case totals as last month.

Blackburn said groups and programs have had to make changes in order to say in touch with the people in them. Groups, such as the support group for families of addicts, have been moved to telephone meetings. People in the diversion program can complete their community service hours through a program that started to beautify neighborhoods in Athens. Many people have to do at least 60 hours of community service so they are picking up trash in their neighborhood.

People who are incarcerated for nonviolent offenses in the Southeastern Ohio Regional Jail have been moved into a treatment program instead. Other people have been released because their sentences were completed. The jail can hold up to 70 inmates, and there are currently only 28 inmates.

Coming together for the city

Law enforcement want to ensure that the safety of the people and the city are still a top priority during a time of change.

Blackburn said it is a difficult time for everyone since so many things are abnormal, but the prosecutor’s office will continue to serve Athens.

“We are ready to move forward and keep doing what we are doing,” Blackburn said.

“I just want to reassure people again that we're out in force, and our main goal is for the safety and well-being of the citizens of Athens County. We're going to make sure that happens,” Smith said.

Harvey said he thinks the city has responded well and has seen people and business come together to help one another.

“I think the Athens community has always been and always will be very community oriented,” Harvey said. “We'll do everything we can to be part of that as a police department.”