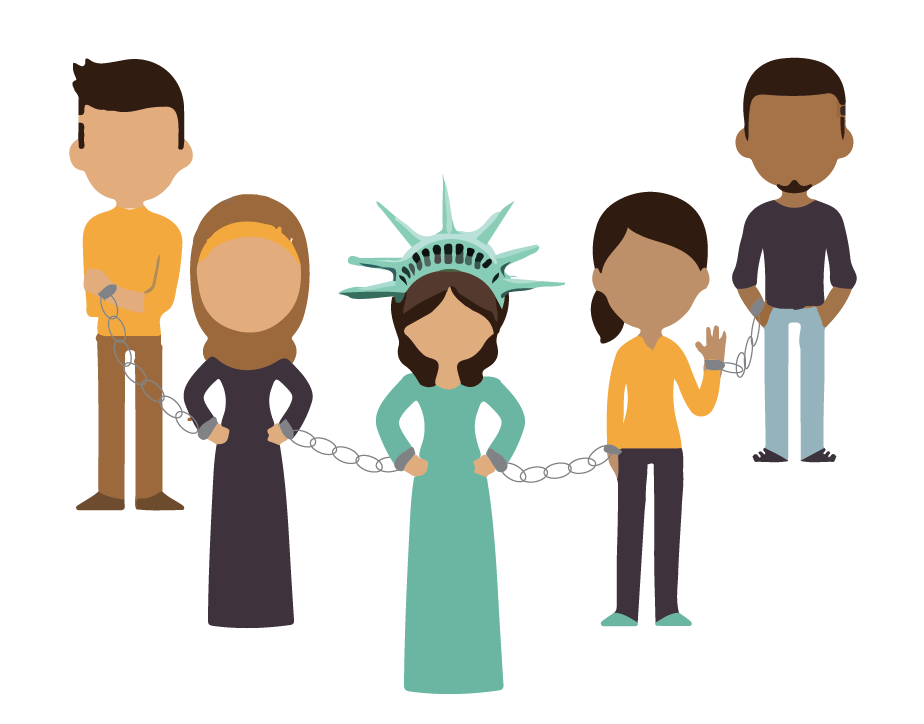 
Eight coat-clad Iranian students, boots cracking against the salted pavement, stood outside Baker Center on a bitter January afternoon. They held up paper signs and were chained together at the wrists — symbolic, one said, of their inability to re-enter the U.S.

“America is already great,” read one sign. “I have not seen my family in three years,” read another.

The students — most, if not all of them, enrolled in graduate school — were protesting the first of three iterations of a travel ban signed into effect by President Donald Trump in January.

A few passersby offered cookies and cups of coffee. Some scribbled their own messages on notebooks and joined the demonstration.

One man driving by honked his horn, flashed a thumbs-up and shouted “Vote for Trump” at the demonstrators.

The January ban, which limited immigration from several predominantly Muslim countries, was met with disapproval by many OU students, culminating in a Baker Center demonstration during which 70 students were arrested for criminal trespassing. 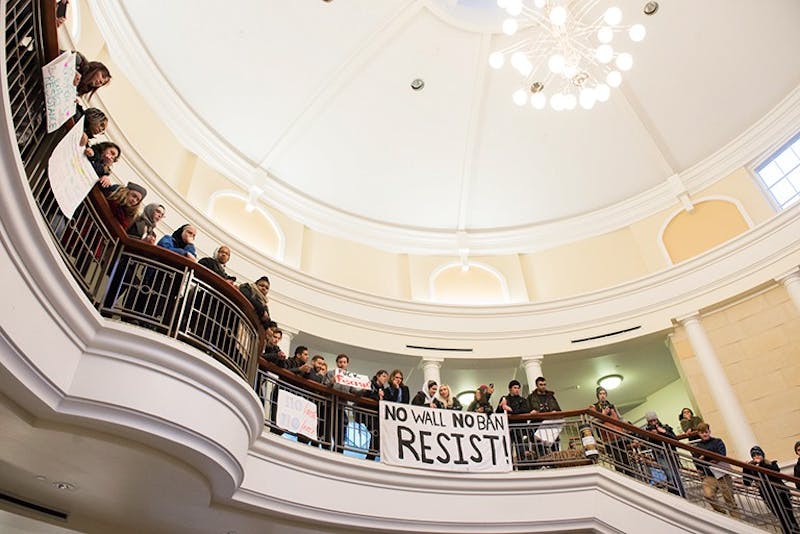 Protesters stage a sit-in in Baker Center on February 1, 2017.

For many of OU’s international students, such as Graduate Student Senate senator Bahman Shahri, the restrictions have presented challenges beyond those they already faced.

“International students naturally face different kinds of challenges when they go to universities, from the national visas to having working limits. But this one is different,” Shahri said in a previous Post report. “There’s this anxiety amongst them. Not just members coming from these eight countries, but other international students.”

Shahri isn’t alone in those challenges. Dozens of international students are and have been affected by the travel ban since the beginning of the school year. A number of students were invited to share how impactful the ban has been on themselves, their friends and family, but all declined to be interviewed, citing concerns for their personal safety.

Trump’s election has corresponded with a “near historic” rise in anti-Muslim hate groups, according to the Southern Poverty Law Center, with an increase of about 197 percent since 2015.

One student, who said he was previously “pretty active” in protesting the ban, declined an interview for personal safety reasons. The situation, he said, “just got worse.”

The most recent travel restrictions, which affect citizens of Chad, Iran, Libya, North Korea, Somalia, Syria, Venezuela and Yemen. In addition, some Venezuelan government officials and their families are barred from entering the country. The latest ban was scheduled to go into effect Wednesday.

Stipulations in the newest executive order are broad and largely vary by country. For most countries affected, both immigrant and nonimmigrant visa holders will be barred from entry and re-entry into the U.S.

Iranians will be barred from obtaining immigrant, tourism and business visas, but will be eligible for student and cultural exchange visas if they undergo “advanced screening” and vetting requirements, according to the proclamation.

A statement issued by the White House outlines restrictions on several countries out of the nearly 200 evaluated that were determined to be “deficient” in respect to their national security standards and protocols. In some cases, the executive order referenced “significant terrorist” presences within countries under the restrictions.

According to OU’s Office of Institutional Research, as of 2016, there were 97 students who would be affected under the current travel restrictions. Of those, three were from Venezuela, two were from Somalia, 72 were from Iran, 16 were from Iraq and four were from Yemen. There were no students from Libya, Chad or Syria enrolled at OU during the 2016-17 academic year.

University Spokeswoman Carly Leatherwood said in an email that data for 2017 was not available.

On Oct. 9, the U.S. and Turkey mutually suspended all nonimmigrant visa services following the arrest of a U.S. consulate employee in Istanbul. As of fall 2016, there were 27 Turkish students attending OU.

The saga began in January 2017, when Trump unveiled an executive order suspending the U.S. Refugee Admissions Program, blocking Syrian refugees indefinitely and suspending the entry of nationals from Iran, Iraq, Libya, Somalia, Sudan, Syria and Yemen for 90 days from the date the order was signed.

As thousands flooded airports across the country in protest of the ban in late January, then-OU President Roderick McDavis signed a letter to U.S. Department of Homeland Security Secretary John Kelly through the American Council on Education, expressing concern with the executive order.

About a week later after the original ban was announced, a district court in Seattle issued a temporary restraining order blocking the enforcement of significant parts of the order.

Following a March legal battle, the original ban was revoked and replaced by a new executive order suspending the entry of citizens of Iran, Iraq, Libya, Somalia, Sudan, Syria and Yemen for 90 days. The order was less restrictive than the previous ban and did not apply to permanent residents or those holding valid visas.

In June, the U.S. Supreme Court announced it would allow a limited version of the most recent ban to take effect. Although the court was set to hear full arguments about the ban this month, the appeals ruling was thrown out, as the previous temporary order had since expired.

On Tuesday — just as the newest ban was to go into effect — a judge from the Federal District Court in Honolulu, issued a nationwide order temporarily blocking the president’s third order.

As the newest executive order would affect around 100 of OU’s international students, Dean of Students Jenny Hall-Jones hopes to see a day in which all students are accepted, regardless of immigration status or home country.

“My hope for them moving forward is that they can go home and come back freely,” Hall-Jones said. “That would be my hope. That they are respected as guests of our country and as people who are studying here, and can go home when they want to go home and then come back and complete their studies.”

In the meantime, Hall-Jones said, International Student and Faculty Services has done “a great job” with one-on-one counseling and outreach to international students who may need “a little extra support.”

University senates and administrators have been floating the idea of hiring an attorney to represent international, immigrant and undocumented students, according to a previous Post report.

“There’s this anxiety amongst them. Not just members coming from these eight countries, but other international students.” Graduate Student Senate senator Bahman Shahri

For Vice Provost for Global Affairs Lorna Jean Edmonds, international students are “ambassadors for the university,” sporting OU T-shirts and walking across the stage at commencement like every other student.

“I think we start to realize that we all, in many ways, are the same. Our worries are the same and our hope and dreams are the same, at the end of the day,” Edmonds said. “I don't think it's about nation building anymore. I think those days are over. We only have one planet. We better make the most of it, and having international students allows us to do that.”