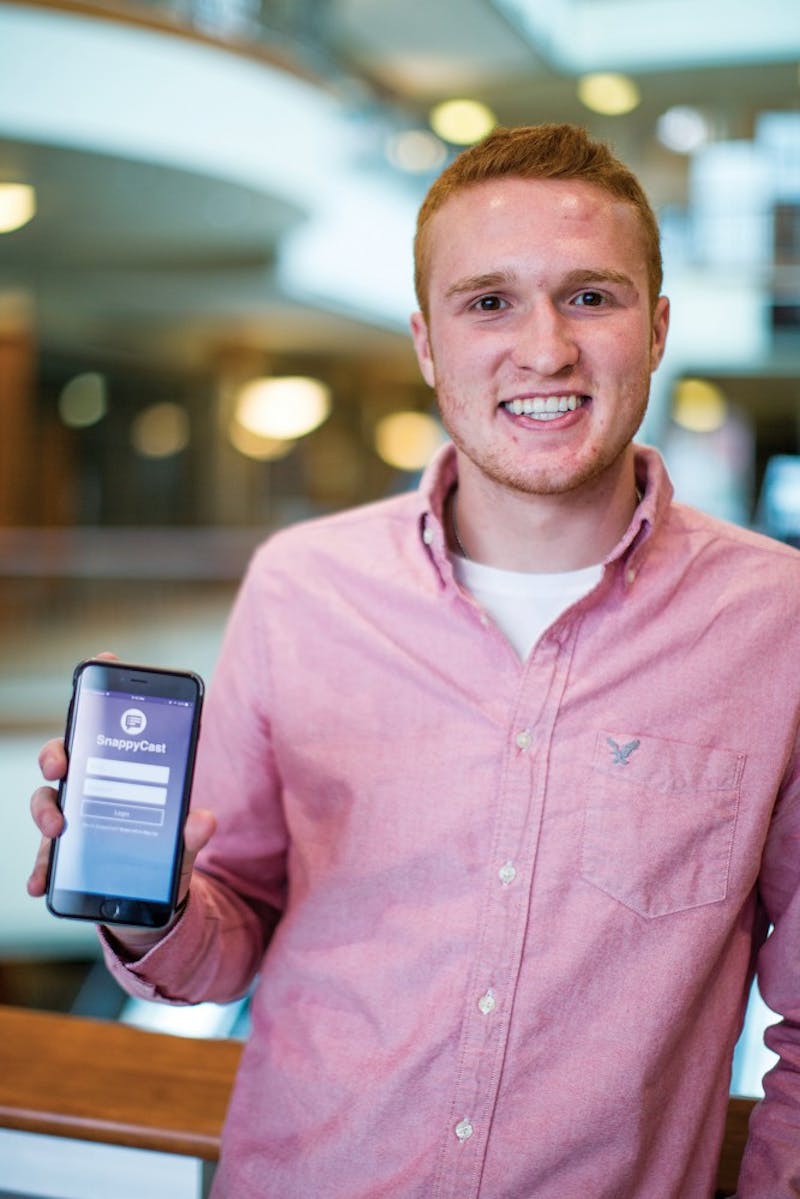 Not many 19-year-olds can call themselves a CEO, but Matt Benson can.

In high school, he recorded and sold DVDs of events. At the same time, he purchased glow sticks in bulk and resold them for a dollar.

But Benson’s latest business venture, a school communication software called SnappyCast, is both his most developed and his most successful — and he hasn’t made a single dollar yet.

Benson had always wanted to be an entrepreneur. A freshman studying business, he could never see himself working for someone else. However, he never knew exactly what his next business move would be — until he met Gage Hickman.

For three years in high school, Benson served as the student liaison for the Chillicothe City School Board of Education. He was responsible for attending meetings, traveling throughout the district to meet with students and staff to discuss issues and reporting said issues to the remainder of the board.

Benson and Hickman met at Boys State, an American Legion-sponsored summer leadership program. Hickman was a participant and Benson, who had participated the prior year, was a counselor.

Hickman mentioned to Benson his idea to create an application that would allow schools to quickly and easily share school delay and closing information with parents.

A lightbulb went off in Benson’s head.

As student liaison, he directly witnessed the problems that were annoying students and teachers; he understood that technology, communication and affordability were hot topics amongst them.

Benson knew Hickman had a fantastic idea, and from there, the two created SnappyCast.

Dr. Jeffrey Fisher hit a roadblock when a newly-passed federal law hamstrung his school’s ability to contact students’ parents regarding school emergencies. Fisher, the principal of Chillicothe High School, would be unable to alert parents to weather delays, school closings or emergencies unless they opted in. Fisher knew he would have to change services to stay within the confines of the law.

Then Matt Benson came calling, asking his former principal if he would be willing to beta test his new software that would fit Fisher’s needs.

“Matt’s capabilities to present the app and this technology … would be, if you didn’t know him, a real calling card,” Fisher, a three-time graduate of Ohio University, said.

Fisher, impressed by both Benson’s pitch and the software’s potential capabilities, was eager to try out the application. He quickly discovered that Benson and his team had expanded SnappyCast to be far more holistic than a simple notification system.

In addition to SnappyCast’s original school-to-parent notification system, the system has developed into a comprehensive safety and communication application.

The software also allows the school to send notifications to emergency responders and media outlets to confirm emergencies, such as school closings or active shooters. In the case of an active shooter, the mobile application would allow a teacher to push a button on their phone to trigger a silent alarm that would notify the school and police.

“Instead of having to call 911 and frantically trying to get the information out, you press four buttons and it’s done; everyone’s notified,” Benson said.

Having undergone testing at Chillicothe High School and nine other Ohio schools, SnappyCast is wrapping up its beta stage and moving to full sales. Soon, Benson will be profiting off the software he and his team have been working on for months — but that’s not what’s most important to him.