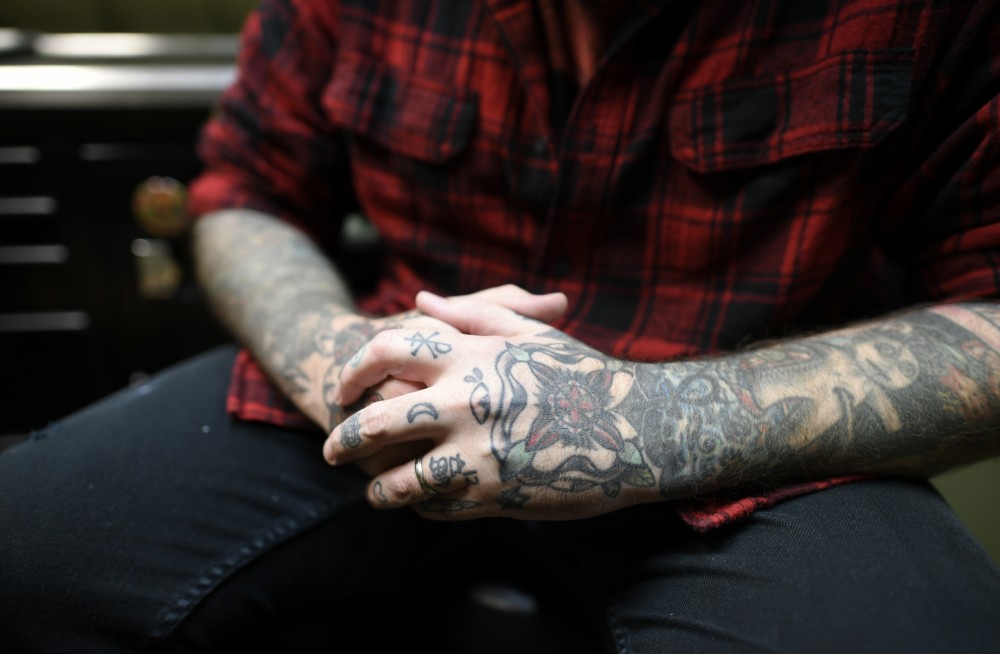 How the Athens’ tattoo industry has changed over time

Jim Kisor often sits bent over a stool, tattooing three to five tattoos a day. After 20 years, he said it’s taken a toll on him.

Kisor is the owner of Decorative Injections, 44 N. Court St. He began his career as an apprentice at Art Apocalypse in 1996, a shop that used to be next to The Union Bar and Grill, 18 W. Union St. He cleaned a lot of the equipment and helped the other artists design tattoos.

“After a couple of years, it had gone under different ownership and the original piercer there opened (Decorative Injections) in 1999,” Kisor said. “(the original owner) sold the shop to me and my wife, and we have had it ever since.”

He said the art of tattooing has changed immensely. He said it used to be like a cookie cutter mold, with the cost of tattoos set by color. As the internet became popular, he said people are capable of looking up their own designs and make them more personal.

“It opens the world of what you can draw and create for someone,” Kisor said. “It’s a lot more accepted to be tattooed.”

Kisor enjoys superhero portraits and the Americana style of traditional tattooing. Since his shop is Uptown with constant foot traffic, he began his career believing he would need to be able to tattoo a lot of different styles.

“I started out thinking that I needed to try to be good at everything I could be good at,” Kisor said. “We are right here as a street shop and because there are so many people coming in, if you stuck to one particular style, you’re going to start alienating a certain crowd of people that want tattoos. I try to be as fluent with everything that I can.”

Next October, Decorative Injections will have been open for 20 years. Kisor said when he took over the shop, he did it to perfect his artwork, have it look the way he wants and have freedom in his work.

“Now I raise a family with the income I make here and I do get to create art everyday and I feel extremely fortunate,” Kisor said.

Eric Pierce tattoos a lion in a headdress onto Holly Satterfield on Nov. 26, 2018. (Meagan Hall | DIRECTOR OF PHOTOGRAPHY)

At the start of each semester, Kisor said he sees an influx of students wanting to be tattooed. He used to do a lot of big projects, but now does smaller stuff because that is what people request.

Like Kisor, Shawn Hawks sees the effects of having an Uptown location.

Hawks opened Skin Hooked Tattoo and Body Piercing, 8 N. Court St., five years ago. He’s been tattooing on and off for 25 years, and it is his second shop that he’s opened after scouring Athens for the right location and rent.

He got his start when he was in the United States Marine Corps and used to draw tattoos for his friends. Hawks made a rapport with a tattoo artist who offered him an apprenticeship and then the rest fell into place. He’s also a semi-professional fisherman, which is how Skin Hooked got its name.

Hawks said he does a lot of small tattoos, likely because of the location on Court Street. His style consists of black and gray realism, portraits and cover-ups.

He enjoys working in a college town where students are always on top of the latest tattoo trends and know what is popular, Hawks said. Lately, he’s been doing a lot of water-colored flowers. Being in Athens also means a demand for same-day tattoos, as students will go elsewhere if they cannot get a tattoo immediately.

Thunder Bunny Tattoo Parlor, 26 W. Stimson Ave., is a tattoo shop out of the foot traffic of Uptown.

Alex Andrews, the owner, has 13 years of tattooing experience. He drew tattoos for upperclassmen in high school and made it a side business. When Andrews was 18, his instructor in the fine arts program said she saw very promising tattoo capabilities and suggested he do an apprenticeship. It worked for him.

“My mom said I could color in the lines of a coloring book before I could walk,” Andrews said. “I was naturally inclined to line art in particular. I was a poor kid growing up, and art was how I passed a lot of my time.”

After five years of tattoo experience, Andrews decided he wanted to be under his own jurisdiction and rules. He bought the studio for $5,000 and said it was a blessing in disguise. In February, Thunder Bunny will celebrate six years.

“I just didn’t realize that was going to happen when I was 25 years old,” Andrews said. “I was young and kind of impressionable. I thought it would be a good change for me to have so much discipline.”

Andrews said his style is a lot of everything — color portraits, neo-traditional, new school and vibrant color work.

“I respect skin so much that I can’t by any means look at someone and give them a lick and stick,” Andrews said. “If it’s something that is done a million times we will try to redraw it and make it original and make it unique.”

Thomas Green got into tattooing by being tattooed. He said he used to hang out at a shop all the time and then decided he wanted to become an artist. He worked with Kisor and Andrews at Art Apocalypse during the start of his career. Now he’s been tattooing for 20 years and has been at Thunder Bunny for a year and a half.

“I couldn’t make my way playing guitar so here I am,” Green said. “I would be drawing anyway, so I might as well make some money out of it.”

He said he also sees a lot of fads in tattooing, especially if a celebrity posts something on social media. In a span of two days, he recently did three separate tattoos of a snake eating themselves.

During graduation, he does a lot of pawprints and latitude and longitude coordinates of Athens. He even did a couple of The JBar tattoos.

Brad Clabaugh, another artist at Thunder Bunny, said the amount of tattoos the shop does depends on the time of year.

“We could be having a special and have upwards of 100 people trying to come in through the door or we could have tumbleweeds blowing by because it’s Thanksgiving break,” Clabaugh said. “It slows down this time of the year and then picks right back up in February and then trickles down again for the summer.”

Tattooing is also a challenge to create a stable income if you do not have a steady client base, Green said. During Friday the 13th, Thunder Bunny will offer $31 tattoos, where customers can pick a pre-drawn design. It’s one of their most popular days.

“It’s a real hit or miss and that’s the nature of the business,” Green said. “You’re not making a salary, you’re not making an hourly wage. That’s one of the trickiest parts of being a tattoo artist. You have to make a living and figure out how to keep making a living.”

When Hawks started tattooing, sailors and bikers mostly came into his shop. Now he said his client base is 80 percent women, as tattoos have gradually become more acceptable.

Andrews said he began his apprenticeship in the era when tattoos had a negative stigma and people focused on the quantity of tattoos over quality.

“Bikers still have that same mentality. They’re like hippies with motorcycles,” Andrews said.

Now, tattoos have become more acceptable because of social media. Tattooing used to be like a “tight knit group with a lot of secrets,” Green said.

“It’s weird for me to think of myself as an old timer, but I kind of am now,” Green said.

“The nature of the beast is pain and damage to the body in order to beautify it.”Alex Andrews

TV shows and social media have lessened the negative stigma, Andrews said, for better and for worse. He said someone may see someone tattooing on TV and think, ’oh that looks easy’ and then try to tattoo, having no knowledge about the art or skin and how the process works.

“They don’t know nothing about the skin and the pressure that the tattoo machine is applying to the skin to know if it’s damaging the skin,” Andrews said. “It’s hard to tell that it’s a cut when it has black ink in it. The nature of the beast is pain and damage to the body in order to beautify it.”

He said the positive sides are that people now see what tattoo artists do and understand the craft and the respect that comes along with it.

“There’s a lot of respect being built around it,” Andrews said. “We all have hair, we all have eyes. Then we self reflect on what we think we should look like from the moment we were born through body modification. It’s kinda cool.”