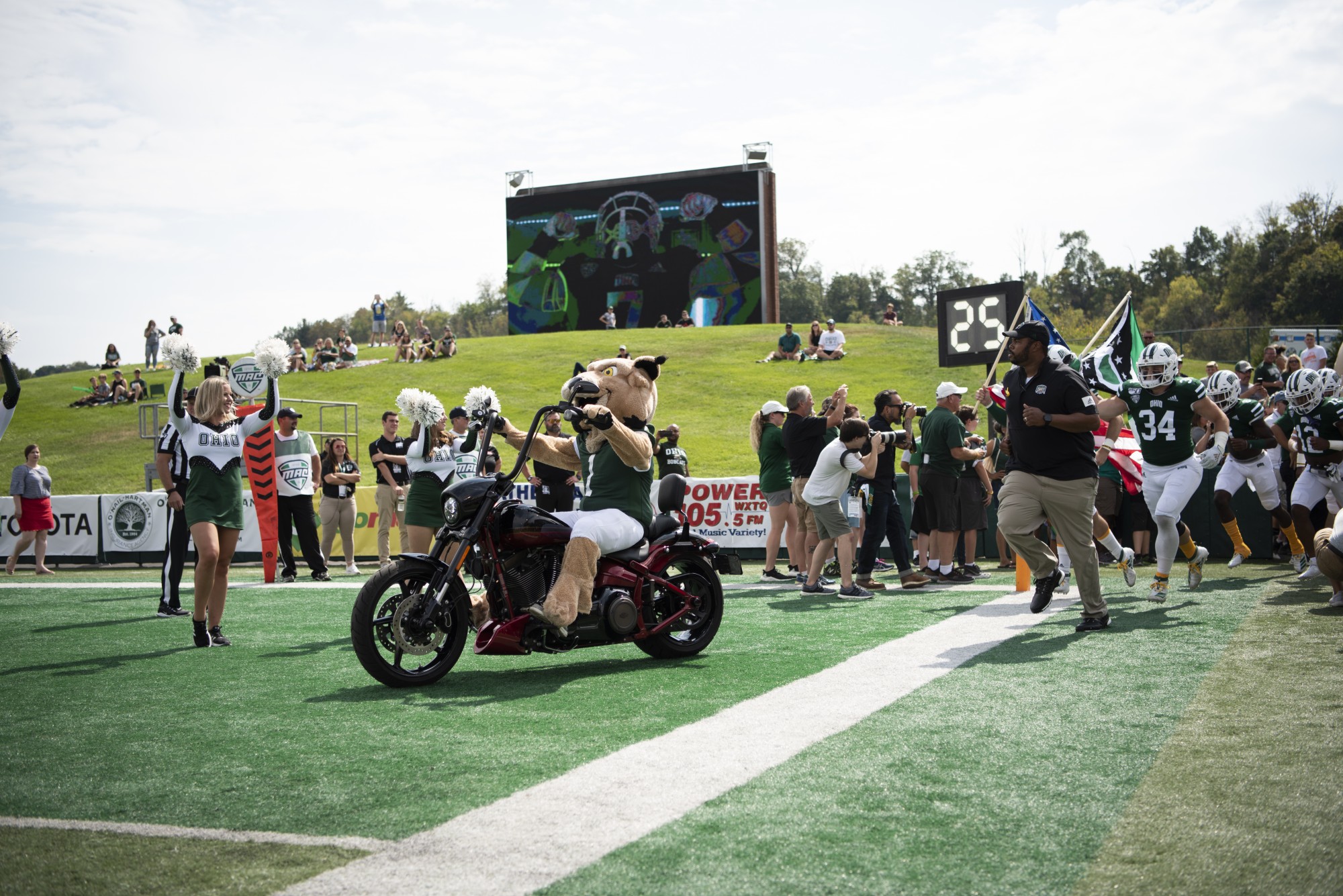 Rufus leads Ohio football players at the start of the Ohio University versus Lousiana-Layfette game on Sept. 21, 2019. (FILE)

T he Bobcat has been a relevant face of Ohio University for a long time. Visible on flags, signs and posters everywhere, OU’s mascot, Rufus the Bobcat, can be compared to the likes of a local celebrity.

Many students believe Rufus has been the face of OU for decades, but that is far from the truth. In fact, Rufus wasn’t created until 2006. The history behind Rufus and the Bobcat mascot is rather complex and something many students don’t know.

Alyssa Goodenow, an undecided sophomore, is an example of a student who had no idea of the history behind OU’s beloved mascot.

“Honestly, I don’t really know much about the history or really any information about our school’s mascots at all,” Goodenow said.

Although Rufus himself may be pretty modern, the iconic Bobcat dates back to 1925. It was a campus-wide contest initiated to help decide on a nickname for OU’s athletic teams that resulted in the introduction of the Bobcat mascot.

Before the start of the Bobcat era, there were multiple names used to refer to OU’s sports teams. The introduction of the Bobcat was a big deal as it finally allowed all sports teams to have the same nickname, bringing a sense of unification to the school.

“Often if it was the football team it would be a generic reference to ‘the Ohio University eleven,’ or, ‘the Ohio football men,’ or ‘the grid men’ or ‘grid team’ or even ‘the O men,’” Bill Kimok, archivist and records manager at OU, said in an email. “For baseball similarly the references would be to ‘the Ohio nine.’ Sometimes they were referred to by school colors.”

The Bobcat wasn’t just chosen to represent the school simply because it was popular; it was chosen for its reputation as a sly, wily and scrappy animal.

Although the university finally had a mascot, it didn’t acquire a name until decades later. For decades the mascot was simply the Bobcat, and in 1960, “Mr. Bobcat” was created by the men of Lincoln Hall.

Unveiled during OU’s Homecoming of 1960, Mr. Bobcat became the university’s first living mascot. In a vibrant green and white suit, the Campus Affairs Committee made Mr. Bobcat a permanent member of the cheerleader squad, cheering at all football and basketball games.

In the early 2000s, it became evident that the current version of the Bobcat mascot, and its suit, were becoming very outdated. The university decided it was time to initiate a refresher on its mascot.

Although preliminary sketches were completed by the university, a contest to choose the new mascot’s name ran from the end of the spring quarter to the first week of the fall quarter in 2006.

OU’s current mascot, Rufus, was officially unveiled at Peden Stadium in 2006. The name Rufus was selected for two significant reasons: the tie to the bobcat species name, Lynx Rufus, and the tie to Rufus Putnam, a former member on OU’s first board of trustees.

It is very true the history of OU’s mascot and beloved Bobcat icon is rather lengthy, but even with such a rich past, most students know very little about this history.

Some students believe that knowing mascot history is not essential to them. Sam Mader, a freshman studying music production, believes the knowledge of OU’s mascots isn’t needed.

“I mean, it just seems more of like a school spirit thing,” Mader said. “I don’t think it really affects student life.”

However, mascots can play a lot of important roles despite some students saying otherwise. Mascots can give a student body a common reference, especially for all the interscholastic athletic teams that represent their school.

“It brings students, staff and alumni together in a common bond,” Kimok said in an email.

Overall, it can’t be denied that both Rufus and the Bobcat’s image is very well recognized. Although the university's mascot history is not known by many, it certainly plays a big role in OU’s history.