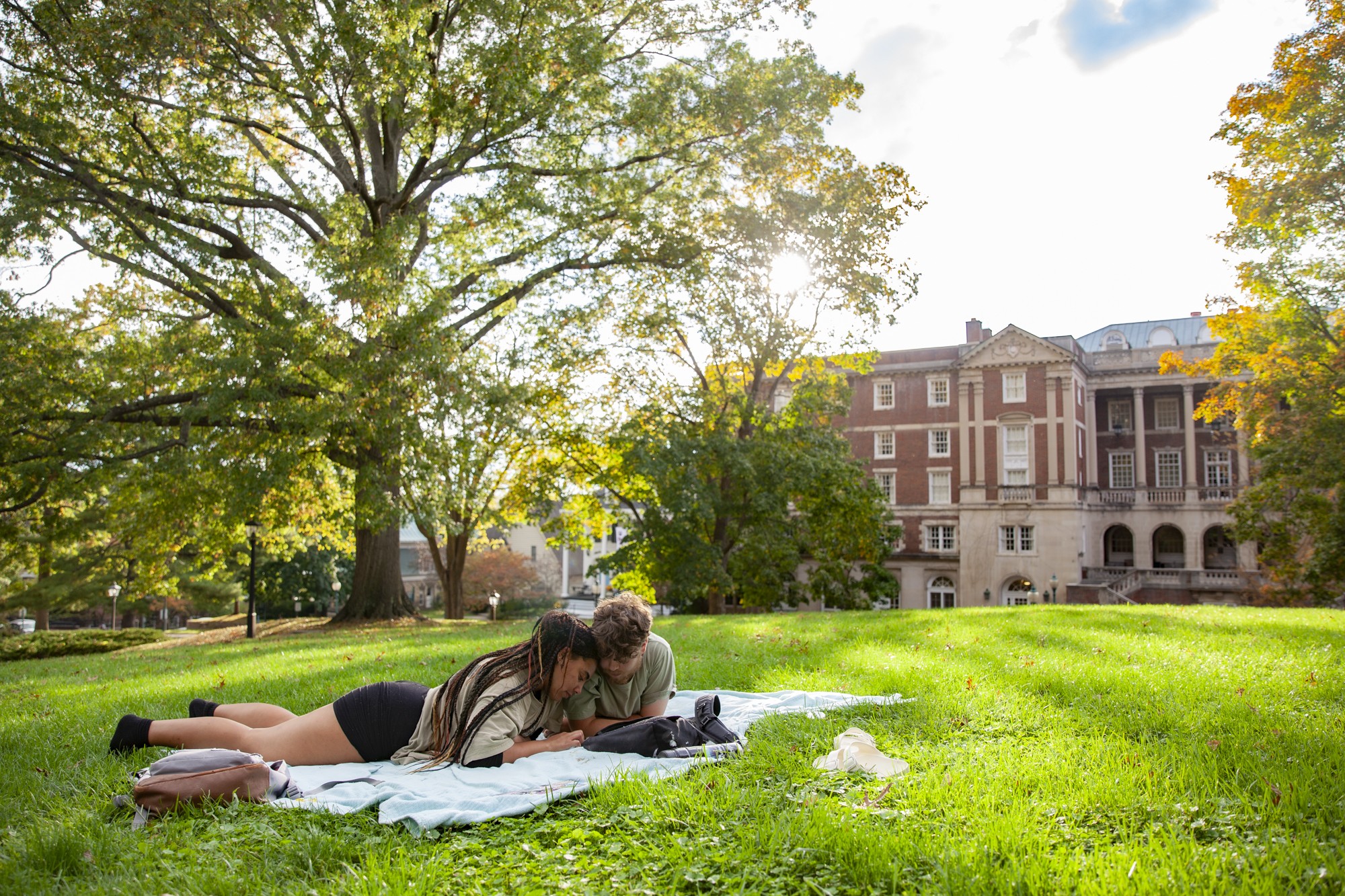 Jada Mitchell, left, and Corey Mullenix, right, watch Squid Game on a blanket on College Green outside of Scripps Hall on Wednesday, Oct. 6, 2021. The nursing major and plant biology major respectively enjoy hammocking usually, but decided to give their hammocks a break and lay out in the sunlight breaking through the clouds and trees just before sunset.

Why They Call Athens Home

T he excitement of Ohio University’s Homecoming is here and so are all the proud alumni. There are many aspects of OU that keep alumni and their families coming back, but the multiple-generation connection to OU is a prominent one in many proud Bobcat families.

With the long-awaited festivities finally here, there is much reminiscing in store, especially for returning alumni. For many, this week is a time to remember the good old days, like walking from class to class through College Green or going out with friends on Court Street.

For Eli Burris, an alumnus who graduated in 2016 and OU’s social media specialist, Homecoming is a time for people to gather and enjoy the familiar sights. Whatever it is, there are stories behind everything for many OU alumnus.

Burris was the 20th person in his family to become a Bobcat, and he couldn’t be more proud. He’s had many family members in the Marching 110, so he always has to watch their performances along with the football game.

“It's just so different, like you have four years of homecoming in high school, and that's really geared towards current students like alumni aren't super involved with high school homecomings,” Burris said. “But Homecoming at OU is all about the alumni.”

Burris said when he was a freshman he didn’t understand the significance of Homecoming. That was before he saw how many young adults, grandparents and grandchildren were lined up along the streets during the parade all to celebrate OU. Burris said his level of involvement in the university also pushed him to enjoy Homecoming more as a student and alumnus.

“I still get emotional when I go and take photos of it now because it's so cool to see so many generations of people all there for the same reason: celebrating OU together,” Burris said.

For some, coming back to Athens is more than a celebration; it’s a reminder of the love they didn’t know they’d find. Jeff Dickson, an alumnus who graduated in 1992, met his wife during his time at OU, and now, three out of his five kids became Bobcats.

For Dickson and for many other alumni, one of the most notable facets of OU is the campus.

“We've always just loved the campus, it's so beautiful,” Dickson said. “If a family comes up toward the campus, just enjoy this time of year especially. It's such a beautiful place when the leaves turn.

Dickson said every time he visits OU, it’s no less of a homecoming. He was thankful for the opportunity to go back and visit his kids when they were all there at the same time.

“When I go back up there, there's always alumni there,” Dickson said. “I just feel like I haven't left.”

As for the week of Homecoming, Dickson, like Burris, always enjoyed going to the football games and watching the Marching 110. Along with the current Marching 110, the Alumni Band also provides a performance, giving a refreshing energy to the parade.

Burris said watching the Alumni Band gives him chills every time and that it can never grow old.

Ellen Boll, an alumna who finished her undergrad in 1988 and graduated with her master’s degree in 1990, agrees with Burris that watching the Alumni Band is a highlight of Homecoming.

Boll said she loves campus in the fall and will take any opportunity to go back, which she often does because her son is a current Bobcat.

“I just always love going back to Athens, Athens is comfort,” Boll said. “It just doesn't exist anywhere else.”

Boll said she hopes students will learn what it means to “come home” after experiencing Homecoming. Burris, Dickson and Boll all believe a new appreciation for Homecoming comes with graduation.

After the absence of Homecoming last year due to the pandemic, it is only hoped the energy and excitement for Homecoming will be doubled.

“It's such a different energy around Homecoming weekend, and in Athens, there's an electric charge in the air,” Burris said. “Even with some other events that have happened, like Welcome Week, I felt an energy that I hadn't felt in a long time.”

For many, this will be their first Homecoming experience, and Burris, Dickson and Boll hope students are able to enjoy the week and fall in love with Athens.

“It really feels like you're coming home,” Burris said.