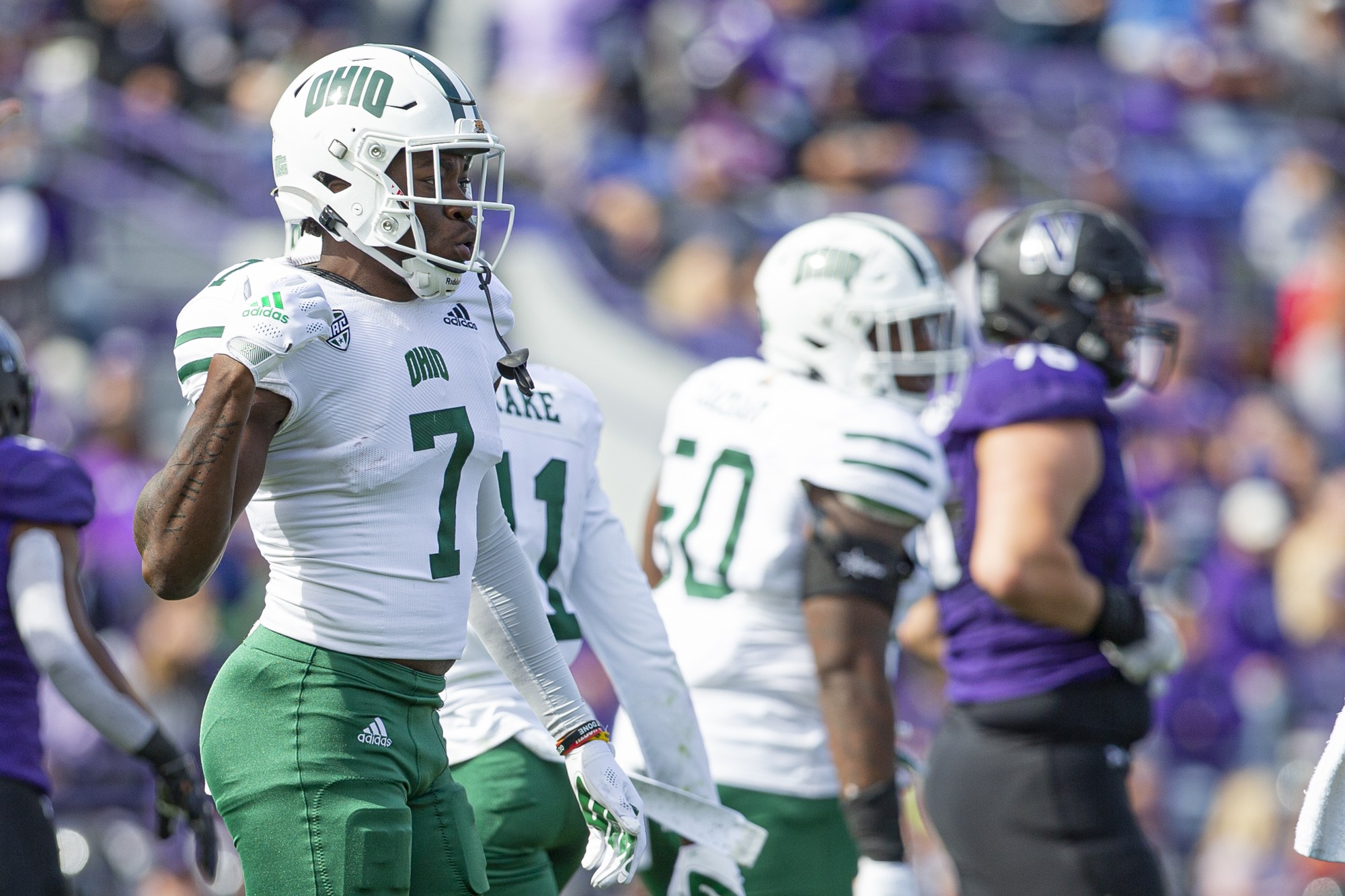 Pierre Kemeni (7) prepares to reset after Northwestern runs the football during the game at Ryan Field on Saturday, Sept. 25, 2021.

Pierre Kemeni has learned a lesson from his parents’ home country

The cornerback finds appreciation in everything Ohio has given him, from its coaching staff down to the training facilities.

Now in the second season of his college career, Kemeni is making a small impact on Ohio’s defense. He’s appeared in every game this season and has recorded six tackles. The numbers are low, but Kemeni doesn't mind. He knows as a redshirt freshman that he still has plenty of room to grow.

In fact, he’s grateful that he’s playing at all.

That passion to hone his craft hasn’t always been there, but he had an epiphany at the right age for it to take shape.

The Milton, Ontario, native is the son of Cameroonian immigrants. His father, Pierre Sr., routinely goes on business trips to Africa, and he owns a cottage back in Cameroon. These two factors often gave the family good reason to make several visits to see relatives.

One of the first things Kemeni recalls about one of his trips to Cameroon is the hills.

Kemeni said the closest approximation to the countryside of the central African country is the stretch of U.S. Route 33 between Athens and Columbus. The foothills of Cameroon sprawled out for miles, and he remembers staying in his father’s cottage in the hills and staring out over a countryside dotted with vast treelines and wide-open fields.

But the scenery isn’t what Kemeni took away from his trips. It was the people he met.

“The main thing was going over there and seeing how people work with less, you know?” Kemeni said. “If people are over there working with nothing, and I'm over here working with a lot, I have no excuse. And that's really what it was for me, like, ‘Wow, I'm seeing everybody bust their ass. I'm seeing everybody grind, and they barely even have an office.’”

Cameroon is not as economically prosperous as the U.S. and Canada. The GDP per capita of the country was just $1,499.37 in 2020 according to the World Bank, compared to the United States’ GDP per capita of $63,543.58. Despite the economic challenges faced by Cameroonians, Kemeni says some of the hardest working people were the ones he met while on his family’s trips.

“You go over there, they don't have Mercedes, they don't have iPhones, but they're happy because that's what they love to do,” Kemeni said. “I can't wake up and be mad because a lot of people don't have this opportunity, and my cousins and families that are over there that are waking up the same time as me, doing things even harder, are smiling harder than I am.”

The family trips stuck with Kemeni. He kept those images in his mind as he began playing high school football for Clarkson Football North, a football prep program based less than 20 miles from Milton. The memories stuck with him when he committed to Ohio in 2019, and he still hangs on to them today.

Kemeni still visits Africa on occasion. In fact, he and his father returned from a trip to the Democratic Republic of Congo before Kemeni was set to report to Athens for Ohio’s fall camp. Now that he’s older, the trips hold more meaning for Kemeni.

“I’ve been to Africa a few times, but me as a 19-year-old is different than me going as a 12-year-old,” Kemeni said. “I was able to experience a lot of things and understand a lot of things I didn't understand younger. So the Africa trip was amazing, and then heading into camp, it was perfect.”

Now, Kemeni reminds himself to be grateful for what he has. He’s a redshirt freshman, and he’s got years of football ahead of him. When Ohio’s fall camp began, he’d sometimes grunt and groan over the 6 a.m. wakeups and the practices in the summer heat.

But then he’d remember the people he met on his trips to Cameroon, and the complaints wash away.