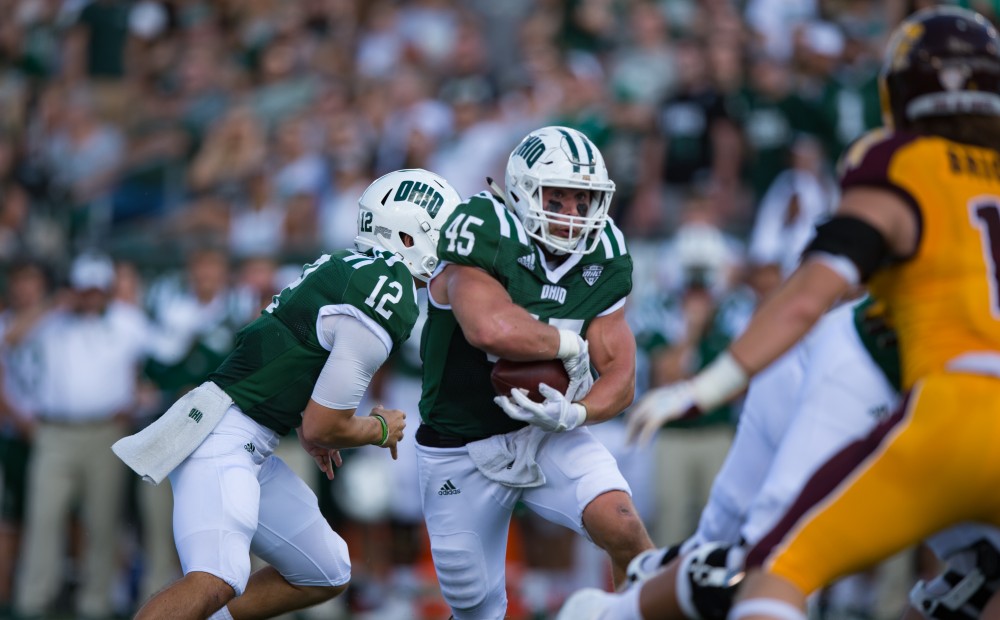 Football: A look at Ohio’s history with Central Michigan

That’s not to say there haven’t been notable moments since the two programs first faced off in 1972. The teams have faced each other in the Mid-American Conference Championship Game twice, and Ohio rang in Homecoming weekend in 2000 by blowing out Central Michigan 52-3.

Here are some of the notable games from Ohio’s all-time series with Central Michigan:

The first time they played

The Bobcats began their 15th season under coach Bill Hess with a 26-21 win over the Chippewas in Peden Stadium. Central Michigan — a Division II program at the time — was still three years out from joining the Mid-American Conference, and Ohio was coming off a less than stellar 5-5 record from the season prior.

Though Ohio started 1972 with a win, it ended the season with a six-game losing streak and finished in the basement of the MAC standings.

The last time they played

Ohio’s first foray into the dual-quarterback system of Kurtis Rourke and Armani Rogers fell short in its 2020 season opener against Central Michigan. The Bobcats kept pace with the Chippewas through the first half, thanks to touchdowns from wide receivers Shane Hooks and Isiah Cox and running back De’Montre Tuggle, and entered the break tied 20-20.

Tuggle took off on a 93-yard kick return to start Ohio’s second half, but the offensive production ended there. Tuggle fumbled the ball on the next drive, kicker Tristian Vandenberg missed a 45-yard field goal attempt and back-to-back punts sealed the Bobcats’ fate. A final turnover on downs handed the ball to the Chippewas, who ran out the final 28 seconds and secured the win.

In their first Homecoming game of the 21st century, the Bobcats buried the Chippewas in front of a crowd of 20,836 people.

Sure, Central Michigan got on the board first when kicker Paul Savich plunked in a 28-yard field goal on its opening drive. But those three points were all Central Michigan would score. It recorded just 290 total yards and turned the ball over twice.

Ohio, on the other hand, stuck to the ground game and let its running backs take the reins. It racked up 444 total rushing yards that day — the third-most in program history. Four different running backs scored a collective six touchdowns, including three from Chad Brinker.

Even quarterback Dontrell Jackson got to stretch his legs. Jackson rushed for 141 yards on 10 carries and ran in a touchdown of his own in the second quarter.

The victory stands as the last time Ohio has beaten Central Michigan at Peden Stadium.

21 years to the day after Ohio was shellacked by Central Michigan 52-7 at Peden Stadium — its largest margin of defeat in series history — it returned the favor.

Led by quarterback Tyler Tettleton’s 230 passing yards on 13 completions and running back Beau Blankenship’s 129 rushing yards, the Bobcats whipped the Chippewas at Kelly/Shorts Stadium. The Bobcats opened the game with touchdowns on their first two drives and entered halftime with a slim 17-14 lead.

But Ohio wasn’t done. It outscored Central Michigan 26-14 in the second half, highlighted by Blankenship’s two rushing touchdowns in the fourth quarter. Central Michigan was forced into three consecutive three-and-outs and was intercepted by cornerback T.J. Carrie in its final drive of the third quarter.

The Bobcats and Chippewas have faced each other twice in the MAC Championship Game. In their first meeting in 2006, the Chippewas snuffed out the Bobcats’ hopes for a MAC title with a 31-10 rout led by quarterback Dan LeFevour’s 314 passing yards and three touchdowns.

In 2009, Ohio didn’t fare much better. It rotated between three quarterbacks — Theo Scott, Tettleton and Taylor Price — and scored its only touchdown of the game after wide receiver Terrence McCrae hauled in a 29-yard reception from Price.

Ohio went out quietly. Its final three drives of the game ended with a missed field goal attempt, a punt and a turnover on downs. Central Michigan ran out the clock, and Ohio was cut down at Ford Field once again.