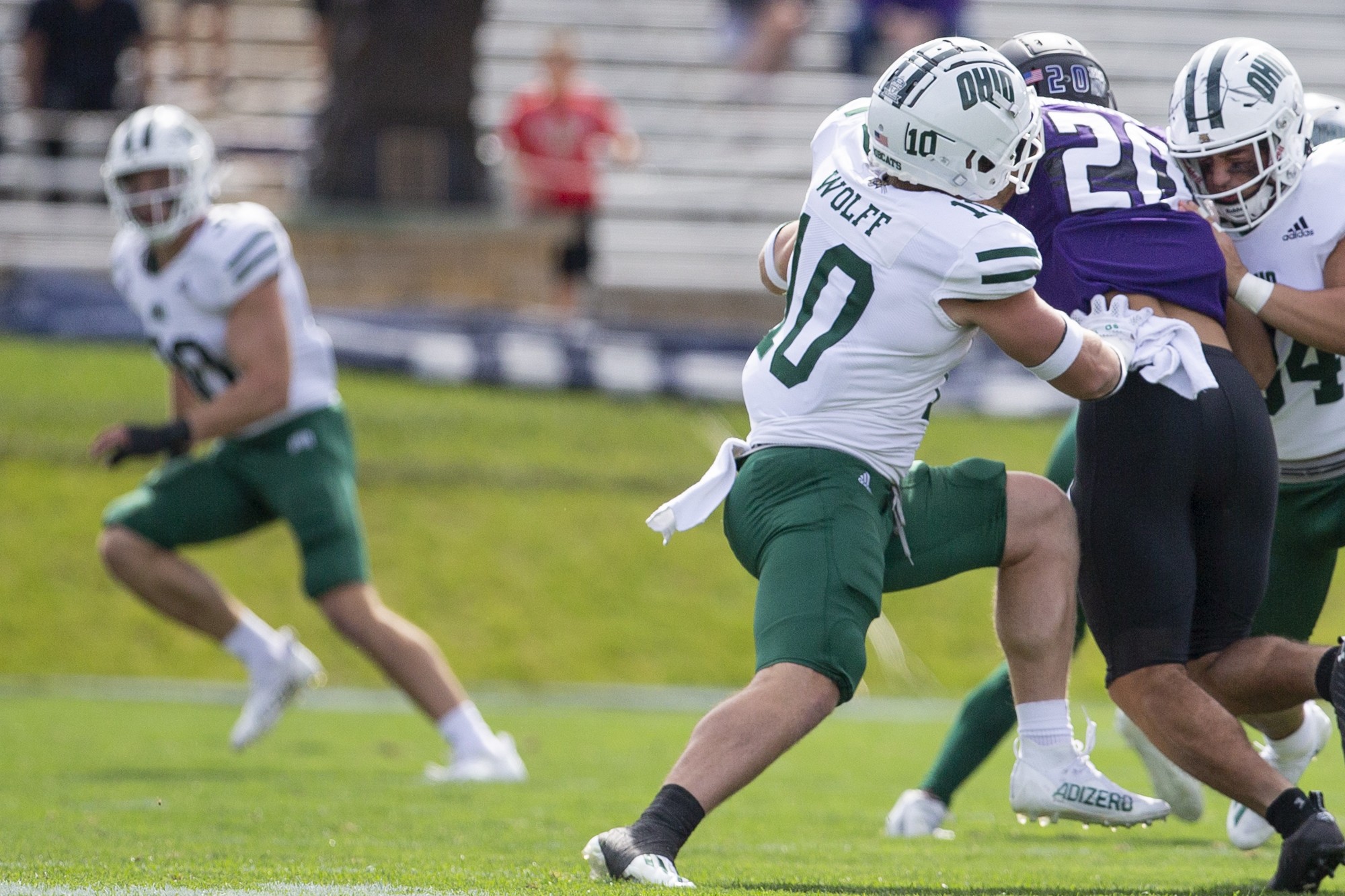 From the sidelines to the field

A lex Wolff didn’t expect his career with Ohio to extend beyond the equipment room — at least, not initially.

The redshirt fifth year has carved himself a spot on Ohio’s roster as a dependable safety for the past four seasons. His stats never top the sheets, but he’s hung with the Bobcats since 2018 and pulled his weight along the way.

But before Wolff was a safety for the Bobcats, he was off to the sidelines. Until his sophomore year, Wolff had been one of Ohio’s equipment managers.

Before college, Wolff played football for Zane Trace High School, a school just north of Chillicothe with a body of around 400 students. His school wasn’t a hotbed for college recruitment, and he only recalled a handful of his friends that went off to play sports at the collegiate level. He’d never received any offers himself, so he joined Ohio’s equipment staff soon after arriving in Athens as a way to stay close to football.

Wolff was content in his role for the first year and a half. He still got to be around the sport he loved, he got along with the Bobcats and he made quick friends with his fellow equipment managers. However, part of him wanted to be on the field again.

So, he figured he’d take a chance.

During winter break of his sophomore year, Wolff mulled over whether or not to walk on to Ohio before spring practices began. He still enjoyed the equipment staff, but he missed being on the field. He asked the Director of Equipment at the time, Matt Morton, if he would be able to come back to work if tryouts didn’t go well.

But Morton offered Wolff help and soon got him into contact with Chris Rodgers, Ohio’s then-Director of Football Operations. Before long, Wolff had joined the Bobcats for winter workouts.

The adjustments weren’t easy. Wolff hadn’t suited up in two years, and he was put on a separate conditioning regimen to get him eased into the workouts other Ohio players were doing. He even had to catch up on his knowledge of the game. Wolff never delved deep into Ohio’s playbook beforehand, so he had to learn quickly to catch up.

“I was equipment, so I didn't get to see all the X's and O's that was going on,” Wolff said. “I just remember it being a little challenging at first to really understand a college playbook and see how things work. But everyone treated me the same, I didn’t have any special treatment.”

Was it difficult? Sure, but Wolff’s a quick study. As spring practices came and went, the safety adjusted quickly to college play. Come summer, he got a call. There was a roster spot with his name on it for the 2018 season.

His first season was mostly quiet. The safety appeared in six games for Ohio in 2018, making his debut in its 58-42 win over UMass.

He still remembers the excitement.

“I remember probably kickoff I was a little nervous,” Wolff said. “Since I hadn’t played in, what was it, almost three years since I had played? I wouldn't say anything too crazy. Like not too much nerves, but I was looking forward to it.”

But the first big moment of his college career came just over a month later, when Ohio blasted Western Michigan 59-14 on Nov. 1, 2018.

The fumble recovery may not seem significant, especially in the context of the game itself. Wolff’s recovery was just one of four made by Ohio in that game. It wasn’t a flashy moment, but Ohio defensive coordinator and safeties coach Ron Collins recalled Wolff’s fumble recovery as the redshirt fifth year’s “big break.”

“Well he came down the field, and I believe he got blocked,” Collins said. “And he dove over, the ball was on the ground, did a forward roll, grabbed the ball as he was rolling and recovered that fumble. It was awesome. And you're just like going ‘Man, that is a seriously athletic move.’”

That was the moment Wolff was on Ohio’s roster to stay. He’s played in at least three games every year since and recorded a career-high four tackles against Louisiana this season. He’s a far cry from his days as an equipment manager, and he wouldn’t trade the experience he’s had for anything.

“I’ve really just enjoyed it,” Wolff said. “Like I said, things I missed was hanging out with the players and being a part of a football team. Everyone pretty much welcomed me with open arms. I have some long-lasting relationships, and I’ve just been grateful and happy that I tried to do it and made the team.”