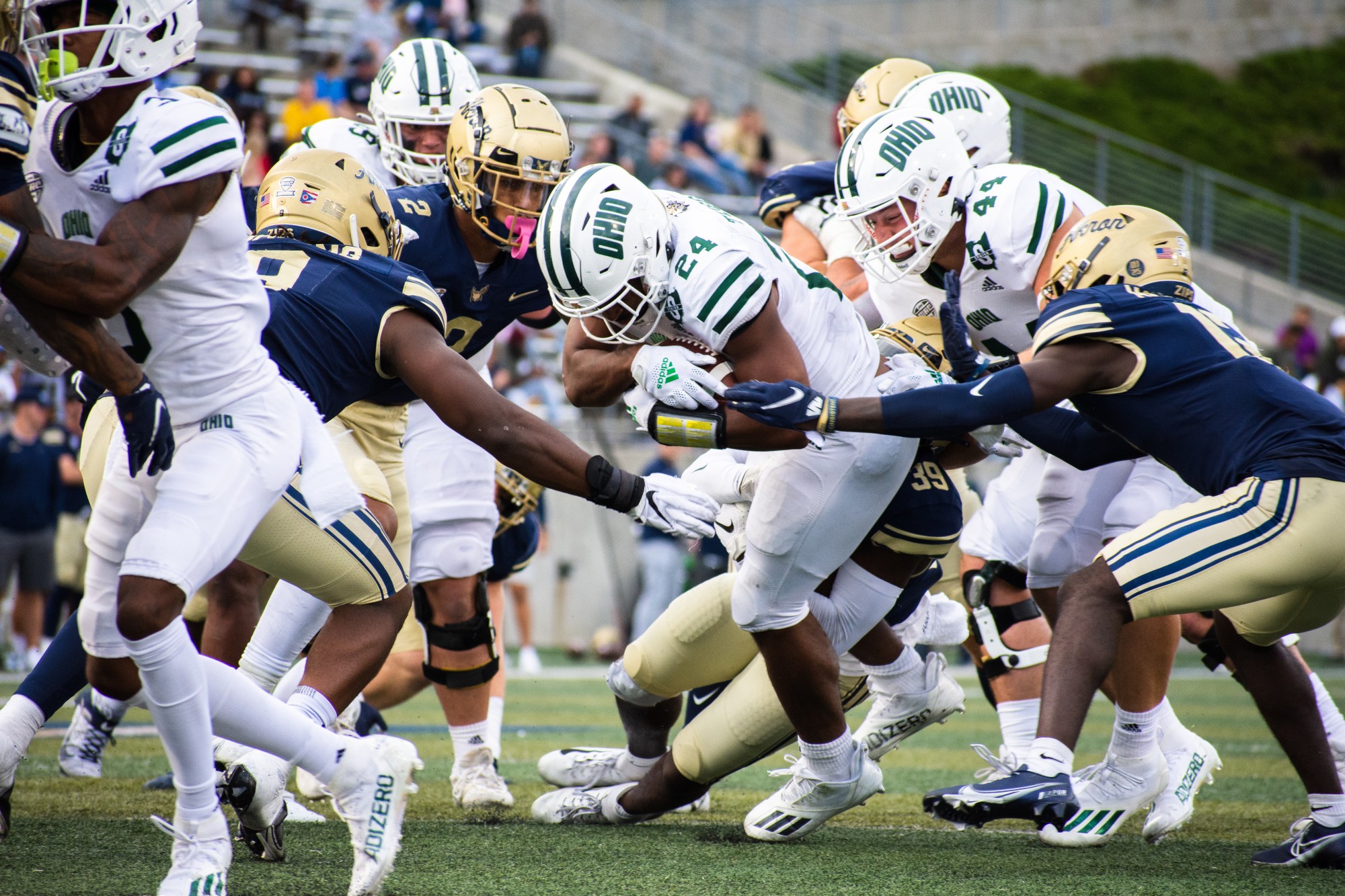 De'montre Tuggle (#24) fighting for the first down during todays game at InfoCision Stadium on Oct. 2, 2021.

Football: Evaluating Ohio’s numbers after its win over Akron

After four weeks of struggling during its nonconference schedule, Ohio earned its first win of the season, 34-17, over Akron on Saturday.

The Bobcats put up a much more complete and organized performance against the Zips than they did against their first four opponents. They drove down the field and scored consistently, contained weapons on the opposing offense and cleaned up many of the avoidable mistakes that originally set them on a four-game losing streak. Ohio is 1-0 in the Mid-American Conference, which is arguably the most important stat it has right now.

Here were some of the biggest improvements made by Ohio on Saturday, and how they gave it its first win of the season:

In Ohio’s first four games, it averaged 141 rushing yards per game on an average of 28.75 carries. Those numbers aren’t low, but when paired with a passing attack that also struggled to get downfield, Ohio wasn’t finding the end zone.

Against the Zips, the Bobcats got off to a quick start with their run game and further embraced it as the game went on. After picking up 163 rushing yards on 20 carries in the first half, Ohio’s run game was pushed to the forefront in the final two quarters.

Ohio had only one passing attempt in the second half next to its 27 rushes and 235 yards. De’Montre Tuggle, Armani Rogers and O’Shaan Allison picked up the majority of Ohio’s yards, with Tuggle leading on a career-high 201 yards and a touchdown. Rogers picked up two rushing touchdowns of his own after taking over as quarterback for the entire second half.

The Bobcats went all in on their run game, and it paid off.

Ohio not only found a groove in its run game, but the defense also found a way to stop opposing rushers.

Prior to their game against the Zips, the Bobcats allowed an average of 283.5 rushing yards per game.

Against Akron, Ohio allowed just 112 yards on the ground, a 56-yard improvement from its second-best performance of the season against Duquesne. Thanks to improved tackling by Ohio’s defense and the shutdown of dual-threat quarterback DJ Irons, Akron didn’t get much done on the ground. Ohio’s defense helped the offense to build a steady lead late in the game.

The MAC has plenty of dangerous rushers, including Central Michigan’s Lew Nichols. If Ohio wants to start a win streak in conference play, it will help if its run defense continues to look like it did against Akron.

Strong drives were capitalized on

Ohio had trouble scoring for most of its first four games. While much of that came from issues with driving downfield, it didn’t help that Ohio struggled to finish when just shy of the end zone.

The Bobcats had just three red-zone touchdowns prior to their matchup against the Zips, and all three came in their game against Duquesne. Other than those, Ohio made three field goals, missed three other field goal attempts and fumbled while in the red zone prior to Saturday. Turnovers and missed field goals weren’t sufficient when going against a nonconference slate that included Syracuse, Louisiana and Northwestern.

Against Akron, Ohio cleaned up its act. It reached the red zone four times on Saturday and scored every single time, with two of those scores being touchdowns. It wasn’t perfect, as Ohio was inside the opposing 10-yard line twice and was forced to kick field goals. Even still, it’s promising that the Bobcats have found more consistency in their kicking game, avoided turnovers and managed to run up the score.