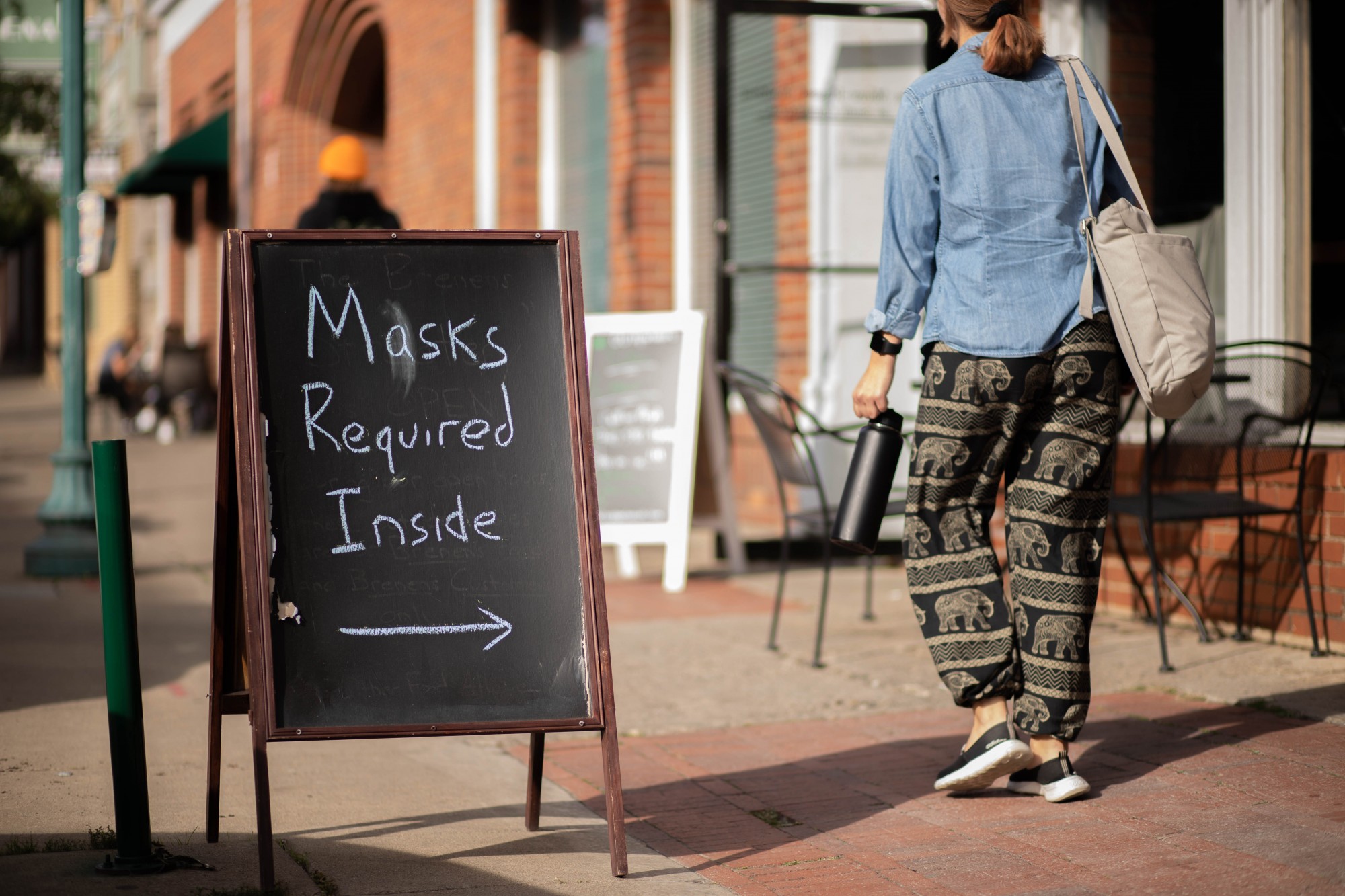 A sign that reads "Masks Required Inside" outside of Brenen's Coffee Cafe on Court Street.

Athens businesses do not expect masking issues, hope for high sales during Homecoming

A thens businesses are not expecting increased issues regarding masking inside their buildings and feel generally prepared for the festivities as Ohio University’s annual Homecoming approaches.

According to a previous Post report, Athens business owners have been required to enforce masking within their stores in accordance with the stipulations outlined in the universal mask mandate that was reinstated in August.

Eateries such as Brenen’s Coffee Cafe, located at 38 S. Court St., Bagel Street Deli located at 27 S. Court St. and Union Street Diner at 70 W. Union St. are currently requiring masking inside and will continue to do so throughout Homecoming weekend.

Brenen’s policy requires customers to be masked when entering the building, moving around the dining room and when ordering. However, customers are allowed to remove their masks when sitting at tables and eating, Josh Thomas, co-owner of Brenen’s, said.

“I would say, maybe 20% of customers come in without one (a mask),” Corbin said. “We do address it, ask them to put one on, we provide them if they don't have them.”

Tim Carman, an owner of Union Street Diner, said he has not seen many issues involving customers being unmasked. However, occasionally employees remove their masks in the kitchen due to high heat, Carman said.

Carman does not expect Homecoming weekend to increase patronage, due to weekends already putting Union Street Diner at peak patronage throughout the day. The “busy” time of day may last a little longer, he said, but he feels prepared because the business has already experienced Parents Weekend this semester.

Brenen’s is preparing for increased patronage by potentially rearranging and removing some tables in order to create more space between customers, Thomas said. Echoing Carman’s expectations, Thomas does not expect a large uptick in customers, having already experienced Parents’ Weekend as well this fall.

However, Thomas does expect to see a few more customers who do not want to follow Brenen’s masking policy, as he has dealt with a few people previously.

“Those (unmasked) people just left, when we said, ‘Listen, when you come in the door, you got to have a mask, if you don't have one, we can provide one,’” Thomas said. “We did have a couple of people that just you could tell they just kind of shrugged their shoulders and said, ‘No thanks,’ and then they just left and went somewhere else.”

Corbin said although she does occasionally see customers come in without a mask on, she simply asks them to put a mask on and has yet to have a customer refuse. Given relatively few issues with masking, she is not concerned about an uptick in sickness due to larger crowds.

Carman and Thomas are not particularly concerned either. All Brenen’s employees are vaccinated, Thomas said, so he does not anticipate employees being out due to COVID-19.

“I'm personally excited that they're having the parade again and I do plan to watch it from a safe distance from others,” Corbin said. “As a business, I would say we’re excited to have a big Homecoming crowd. As weird as it is during these COVID times that we're still experiencing, I think we're going to be happy to have a nice weekend of high sales.”