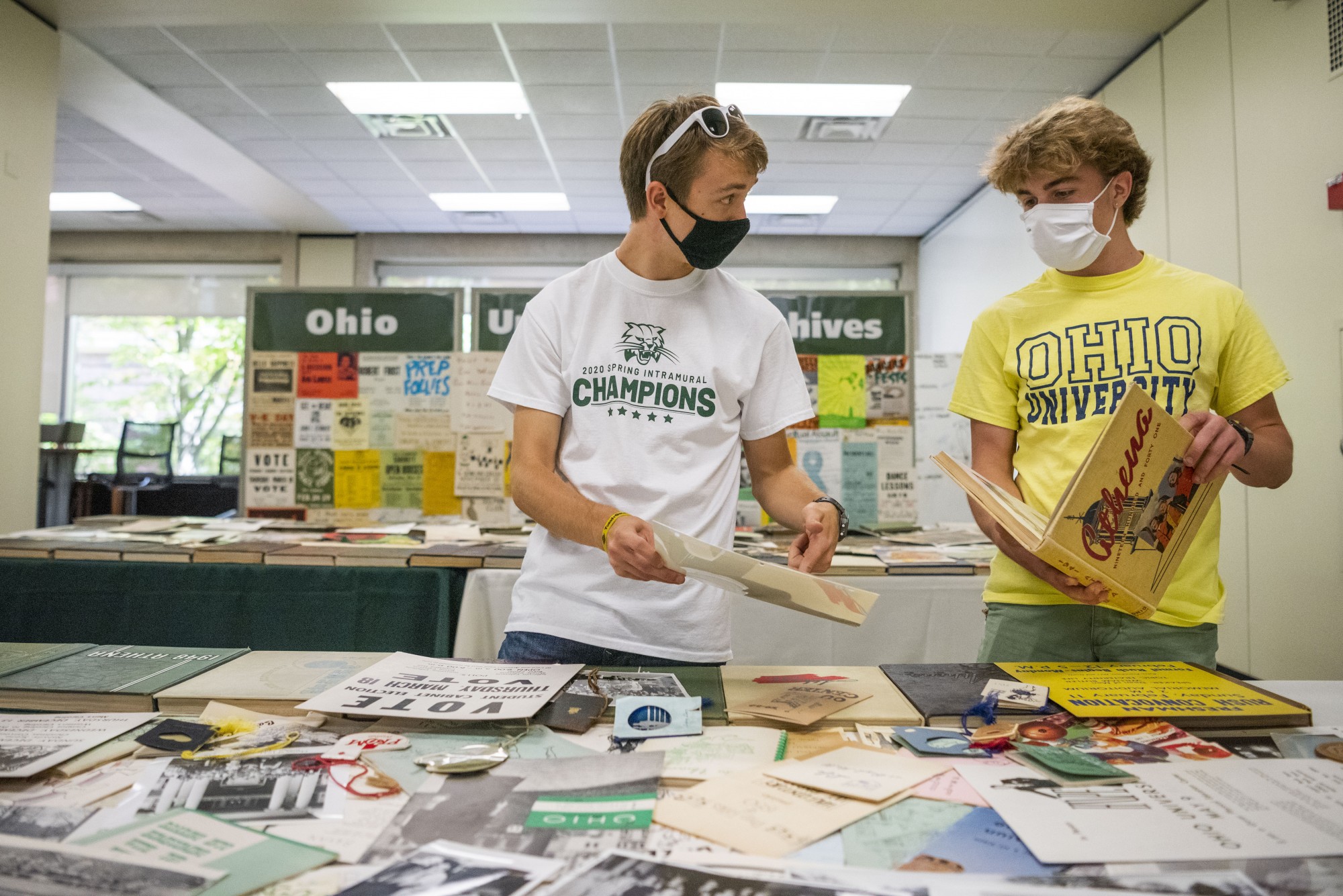 Boozeman Koonce and his friend, Chase Deering, look at past Athena Yearbooks and Ohio University Photos in Alden Libary for the "It’s All Coming Back" exhibit running Oct. 4-9 on the fourth floor of Alden.

‘It’s All Coming Back’

T he history of Ohio University is all coming back for Homecoming 2021. OU Libraries is hosting a digital and in-person event dedicated to exploring archived materials from yearbooks, newspapers, photographs and more.

For over a week now, the virtual version of the exhibit has been accessible and will remain so indefinitely. The in-person version began Oct. 4, and is located on the fourth floor of Alden Library until Oct. 9.

The in-person exhibit explores OU’s history in a broader sense, while the virtual exhibit delves specifically into the history of homecoming at OU. The theme for both of this year’s exhibits is “It’s All Coming Back,” which Bill Kimok, OU’s archivists and records manager, conceived as one with many layers.

“First of all, when people say, ‘It’s all coming back to me now,’ they are usually remembering something from their past, or at least from the past,” Kimok said in an email. “Both the physical exhibit, with its photographs, posters, handbooks, scrapbooks, yearbooks and student newspapers, and the virtual exhibit, with its narrative and illustrations of Homecoming's past, are intended to evoke that kind of memory, especially from OHIO alum. Second, since alum will be returning to campus for Homecoming this year after their absence last year, and, since students came back in August, the ‘It’s All Coming Back’ applies to that situation, as well. So the title has a double meaning.”

Miriam Nelson, director of the Mahn Center for Archives and Special Collections, assisted in the illustrative and constructive components of the exhibits. Nelson said the archives help to evoke a certain emotion from the students and alumni that may view them, adding meaning to the overall theme.

“The collections in the University Archives all have this sense of memory to them,” Nelson said in an email. “They are not just impersonal documents, but rather objects that can represent the lived memory of the people who have made Ohio University the amazing place it is.”

For several years now, Alden Library has held an in-person display of historical materials that are specifically highlighted during homecoming week. Last year, however, was the first year that a virtual component was added due to the coronavirus pandemic.

Kimok described the process for creating the virtual exhibit and reinstating it for this year as well.

“We had some really positive feedback for providing that virtual opportunity (last year),” Kimok said in an email. “So, knowing that there would still be people who would be reluctant to return to campus this year, we decided to offer another opportunity for them to reminisce about their own Homecoming memories on campus; this time by telling the stories and showing images of OHIO Homecomings through the decades since the first one in 1919. By doing this, and letting students and alum know that all of the research for the narrative and all of the images used for illustrations came directly from our sources that are already digitized and online for their own use, whether that be academic research or just for taking a trip down memory lane.”

Erin Wilson, the digital imaging specialist and lab manager at OU Libraries, was responsible for compiling images digitally for the online exhibit. Wilson said the transition to virtual is widely accepted and will likely become the norm for future exhibits like this one, where a virtual component is available in conjunction with an in-person one.

“Since this pandemic, much more emphasis has been placed on virtual engagement opportunities,” Wilson said. “This is a trend that I expect to continue even as in-person events and exhibits return. I think that supplementing them with some kind of virtual presence is a great way to reach a wider audience and create a more lasting product, whereas physical exhibits are only available during a brief window of time. The library's 2021 Homecoming exhibit will continue to be available for students and alumni to view indefinitely. So I think that's how we're starting to think of exhibits in general, even if they are in person, ideally they would have some kind of virtual component as well.”

“It will consist of a dozen six-foot tables filled and piled with items ... (such as) photographs, handbooks, scrapbooks, yearbooks, student newspapers and other historical items and memorabilia,” Kimok said in an email. “As background, I will erect standing boards that will be full of posters with lots of colors and textures and campus events going as far back as the 1920s representing student activities. The cool thing about the posters is that some are slick and professionally created, and others are magic markers on construction paper — sort of like what one might see on bulletin boards in some of the campus buildings.”

During her time creating the exhibit, Wilson said she recognized the true importance of these exhibits is to make observations about the past and how they can influence the present.

“It's a very entertaining read,” Wilson said. “When compiling the images, I was really struck by the fact that while some things never change, and there is a legacy of tradition here, every year and every student body is different, and the university's Homecoming history is an expression of those unique circumstances.”

Nelson said the exhibit’s primary purpose is to allow students to realize the impact they will ultimately have on the history of the university.

“My hope echoes what Bill always says about his work with our students — the exhibit is an opportunity for current and former students to see that they are a part of history as it is being created,” Nelson said in an email.

For both versions of the exhibits, Kimok said the significance of viewing these archived materials is to learn about prior generations and continue the traditions that the university has consistently built.

“It has been obvious from my research of the history of OHIO Homecoming that right from its origins Homecoming has had at least two major purposes: one, to keep the alumni in touch with — and coming back to — their Alma Mater,” Kimok said in an email. “Continuing alumni interest, enthusiasm and support has always been an important part of the event; two, Homecoming has also always been intended to allow present-day students to learn more about the history that they now will share in common with those alums. We hope that our exhibits will help to keep those important traditions going.”