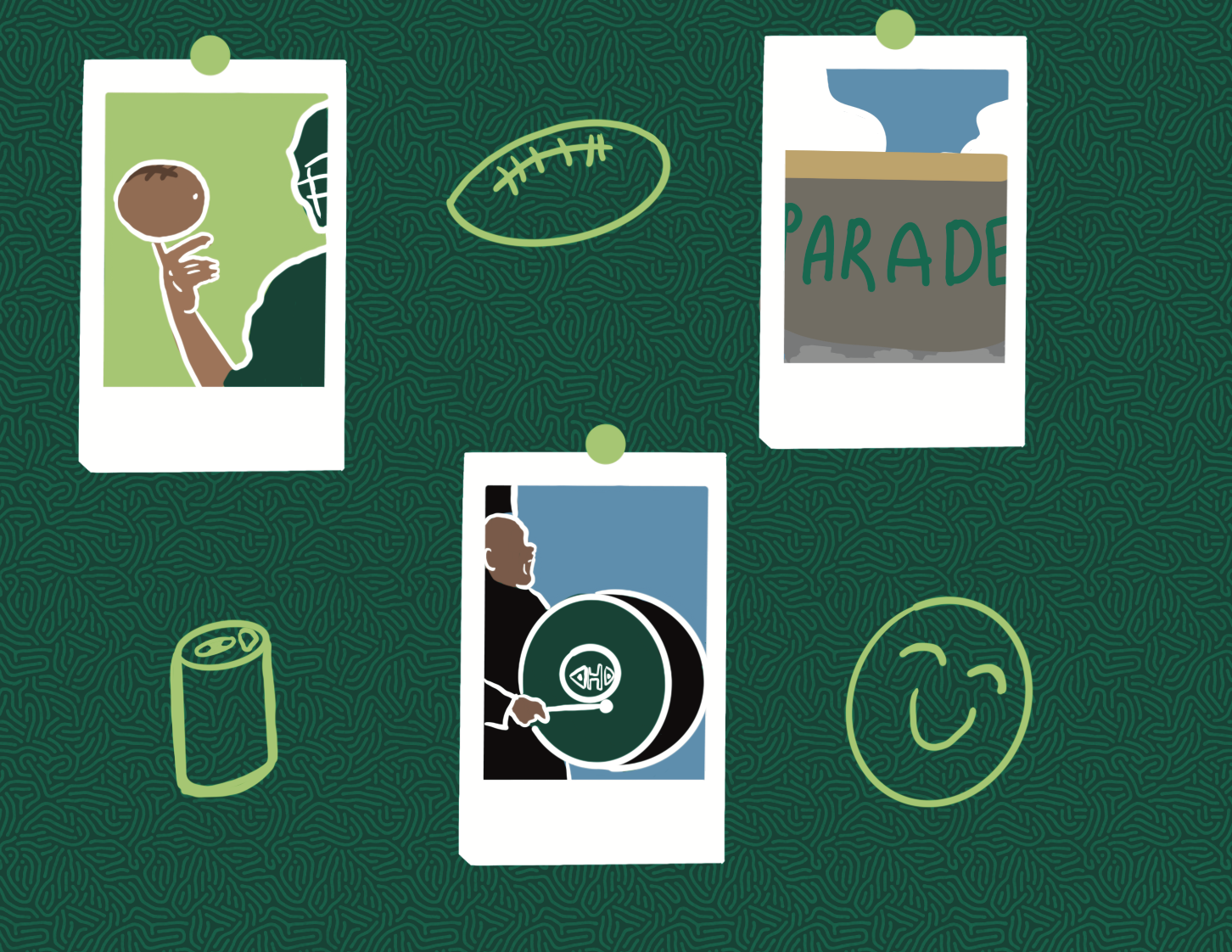 Students, alumni prepare to take part in the staples of Homecoming weekend

C ourt Street erupts with excitement as students, alumni and Athens families fill the sidewalk. The sounds of the Marching 110 play over groups of people laughing and planning the rest of their action-packed weekend. This is the exhilarating image of the Homecoming parade, just one of the many highly anticipated traditions of Ohio University’s Homecoming week that will return to campus this semester.

The week is packed full of events such as the Yell Like Hell Pep Rally, the Homecoming Parade, the Bobcat Bash, the football game and more. Rebecca Prater, director of alumni engagement said all Homecoming events are displayed on OU’s website.

Prater said many Homecoming events, including the parade, will have online and live-stream options available, allowing alumni to participate in classic Homecoming traditions regardless of where they are.

“One of the alumni favorites, of course, is the Homecoming Parade, so we wanted to make sure we could bring it to them,” Prater said.

Erin Essak Kopp, assistant vice president of Alumni Relations and executive director of OU’s Alumni Association, said the online option also serves as a safe way for viewers to watch the parade in accordance with existing COVID-19 protocols on campus. Similarly, the parade will follow an extended route in order to disperse the in-person crowds.

“We take everyone’s health and safety very seriously,” Essak Kopp said. “We have worked very hard to plan opportunities that do that.”

Greg Sheets II, a senior studying electrical engineering and the field commander of the Marching 110, said the performances the 110 puts on, specifically the football game performance, have a goal of creating a sense of normalcy and comfort for the audience. After more than a year of the pandemic and a year without Homecoming, Sheets II explained a lot of people have reason to still feel uneasy in daily life, but the band hopes to relieve that.

“(We hope) for at least the eight minutes that we’re on the field, (we can) have them forget about their daily lives and just enjoy the performance, that’s the biggest thing” Sheets II said.

Sheets II said Homecoming is very busy for the band. With rehearsals, concerts and performances multiple times a day, Sheets II said the 110 is suited up nearly all weekend.

“These big figures throughout the band’s history show up at the end of practice sometimes to talk to you,” Sheets II said. “It’s interesting hearing the history and knowing that you’re a part of something so much bigger than yourself.”

He said the Homecoming parade and football game will include both the current Marching 110 and the Alumni Band. He said this is another great way for the band to connect with former members as they get the chance to perform together.

Having the 110 alumni back to perform for the Homecoming game is a favorite aspect of Homecoming weekend for Ashley Saylor, a senior studying nursing. She explained that it is impactful to see the current 110 playing with all of the alumni, and she loves the atmosphere it creates.

Saylor said her favorite event from Homecoming weekend has been tailgating and watching the football game with her friends.

Saylor said, like past years, she will carry on the OU tradition of getting up early Saturday morning to prepare for the long day of events ahead.

“I love just getting ready with everyone and then just going out,” Saylor said. “When else can you be out at 5 a.m.?"

Aside from celebrating, Homecoming has allowed her to meet a lot of new people and alumni as well as be a part of a staple of OU culture.

“You can’t really describe it, it’s just the energy,” Saylor said. “Everyone is so happy to be there and so excited to get away from life, just to come back to the little Athens bubble for a weekend. I really think the alumni is what brings it together.”

Sheets II said the band has a lot of pressure to achieve a high-energy crowd any time they perform over Homecoming. He said each member of the 110 has a responsibility to do this while also ensuring a high quality performance.

“There’s a lot of personal accountability and emphasis on the history we (the 110) have placed,” Sheets II said. “This is obviously the biggest show of the year.”

As a senior, Saylor said she is excited to participate in one last Homecoming Week, but she wishes she could have had the experience last year.

“Homecoming is one of those weekends you look forward to the whole year,” Saylor said. “You only get four of them … it was just really sad to miss it and not get to see everyone.”

However, seeing the energy the alumni have when they return to campus has given Saylor a bright future to look ahead to.

As an alumna herself, Prater emphasized the significance that Homecoming weekend has for alumni returning to campus.