In the early hours of Jan. 15, 2017, Maleek Irons was arrested and charged with resisting arrest, obstructing official business and driving under the influence after the Athens Police Department found him driving his car into other vehicles.

He was 20, fresh off a season that saw him rush for five touchdowns and help Ohio reach the Mid-American Conference Championship Game.

That night, the first phone call he made was to his mother, Jolene. Instead of making the trek from Chilliwack, British Columbia, she told him that he’d gotten himself in this mess, he could get himself out.

It was time to be a man.

So, he matured. Almost two years later, Maleek is now a semester away from graduation. He’s back to working for the MAC Championship that eluded him two seasons ago.

“I felt like the coaching staff and Maleek were handling it,” Jolene said. “At some point, he’s an adult. At some point, all of us are going to have to handle things on our own.” 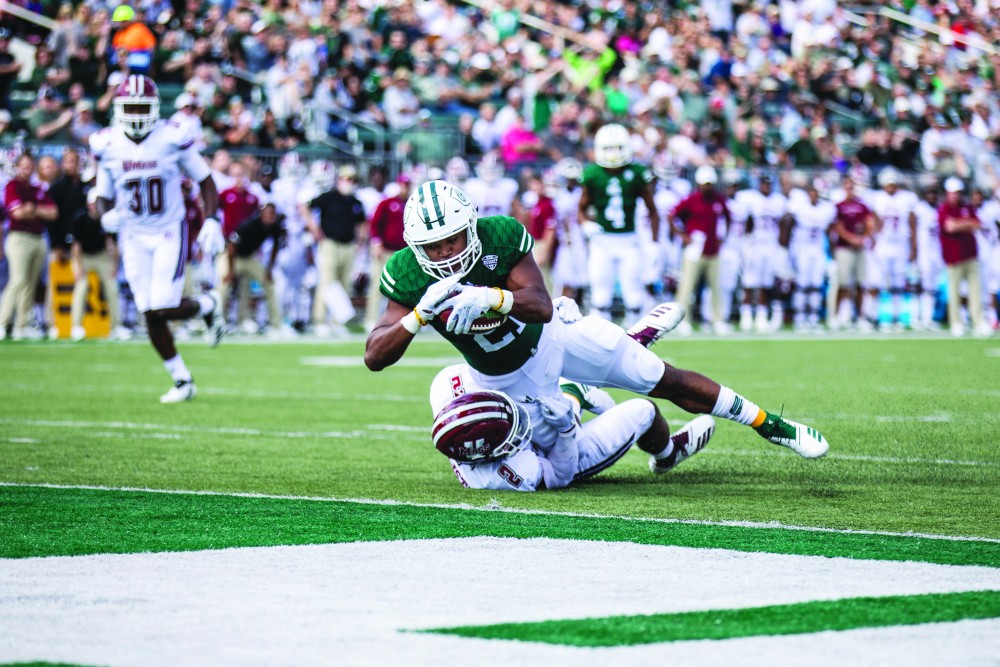 Malleek Irons dives for the end zone while on a run against the UMass defense. Malik would have two touchdowns on the day, as the Bobcats would go on to win 58-42 agasint the Minutemen.

That night was the lowest point of his life, he says. He lost a year of his eligibility. He was not allowed to play for a season, except with the practice squad. He didn’t travel with the team, and he wasn’t always watching films with his teammates.

To put it bluntly, Maleek Irons was isolated for the first time in his life. He was forced to have some tough conversations but one specifically stands out.

Maleek was called into coach Frank Solich’s office a few days after his arrest. In the room was Solich, offensive coordinator Tim Albin and director of operations Chris Rodgers.

He was embarrassed, and they had to talk about some tough things, most notably his future. Jolene believes she became closer with the coaching staff after the arrest. She knows it isn’t for the best reason, but she appreciates all the help Solich and Albin have provided her son and the constant contact they shared.

For a time, there was a chance that Irons would transfer out or be expelled from Ohio.

“They supported me, stood behind me and believed in me,” Maleek said. “I’ll be forever grateful.”

Jolene was disappointed in him and his actions. She was shocked that her only son would do such a thing. She thought back to the Maleek she knew as a kid who loved to play football.

Growing up in Chilliwack, he couldn’t play football as a kid, so he played rugby starting at the age of 7. Finally, when he was 9, his football team had enough kids to form a team in his age group. He always knew he wanted to be a football player, Jolene says.

In 2012 as a junior in high school, he rushed for 3,200 yards, averaging 10.5 yards per carry. He finished with 45 touchdowns. That summer, he started to attend a lot of football camps in the U.S. He played on Team British Columbia in the 2012 and 2013 International Bowl in Texas and played on Team Canada.

He initially started to receive a few offers from both sides of the border. Then, one day out of the blue, Maleek received a letter, offering a full scholarship to play football at Ohio. It was the first time anybody from Athens had made contact with him throughout the recruiting process.

Former graduate assistant Vince Luciani first contacted Irons, but from there, Albin took over most of the recruiting process. He liked what he saw from the Canadian running back.

Maleek fell in love with the campus, and the thought of playing Division I football was enough to convince him to commit to being a Bobcat.

“I did want to come here. I like the players and coaches that I met here,” he said. “It only took me a few hours to know I wanted to play here.”

Maleek went home for four months after the arrest, spent time with his family and reevaluated his life. He trained and changed his lifestyle.

One of the biggest focuses for him was to be level-headed. He felt that during the 2016 season, he wasn’t focused on or off the field. One of the reasons he was arrested was because he didn’t truly have a focus.

Since then, he’s made his future the focus. He understands that this will probably be the last season he will ever play football, and he hopes to be a firefighter after graduation.

Maleek and Jolene both say the reasons he wants to become a firefighter stems from his grandfather, who was a career fireman and was a fire chief for 30 years. Maleek was close with him as a child, and he’s always known that he wants to follow in his footsteps.

“I want to start a family, be a firefighter and support my family,” he said. “I’m not saying this is my last season. But it is what it is, I have to move on at some point. Life moves on.”

Most of that came from the loss in Detroit just a few months before the arrest. Being forced to sit out for a season didn’t help his want for a championship. He was forced to watch the Bobcats squander success in 2017 by finishing their last two regular season games with losses.

It’s been almost two full years since the loss to Western Michigan in the MAC Championship Game. He feels that with a stronger running attack that night, Ohio could’ve won. He puts some of that on himself, and that’s why the training was so crucial.

Halfway through the season, it has seemed to pay off. He’s second on the team in total rushing and reached the 100-yard mark against UMass for the first time in his career. He has also scored four touchdowns, just one short of his mark in 2016.

“The exact play I can think about from the MAC Championship (Game) is when Greg (Windham) threw the interception (on Ohio’s final drive),” Maleek said. “I kind of went down in a squat position, not a good feeling. I didn’t cry, but I was very, very disappointed.

I have never won a championship. That would’ve been it. I would’ve gotten a big pinky ring. Hopefully we can get one this year.”

“At the end of the day he is the one that needs to decide what he will learn from any given situation. He’s a good kid who made some wrong choices, it’s how you handle them that really shows what type of person you are”Jolene Irons

Jolene makes the trek into Washington every Saturday to watch her son play football, a dream he chased down and achieved. ESPN isn’t available for her to watch his games in Canada.

She takes some family friends with her to the same restaurant, where Maleek says they usually eat Mexican food. He always knows that no matter what, his “momma” will be his biggest supporter.

The game will be on the TV, as she’s become a regular. The game will also be pulled up on her phone, so she can get a closer look at the game.

She could’ve told her son to drop out of college and come home after his arrest, but she didn’t. She wanted her son to keep chasing his dream. That’s what he did when he opted to play rugby when football wasn’t available.

“He will always have our support to get him through things,” Jolene said. “At the end of the day, he is the one that needs to decide what he will learn from any given situation. He’s a good kid who made some wrong choices. It’s how you handle them that really shows what type of person you are.”

She isn’t able to make the trip to many games, only a couple per season. The trek involves flying to Columbus, which may include a layover. She always makes sure that she can get a few days to see him, especially because the travel is so long.

This Saturday, Maleek will play in the Homecoming game against Bowling Green. It will be the first time in two seasons since he played in front of a Homecoming crowd.

He’s excited. He’s learned from his mistakes. He’s never felt better about himself on or off the field. Now, he’s ready to show his “momma” how much he’s improved.

On Saturday, Jolene will see Maleek play in-person for the first time since 2016.