Marching 110 performances are a tradition that continues to live on and be celebrated, especially during Homecoming festivities.

The “most exciting band in the land” has quite the reputation to uphold. With its halftime shows being a beloved tradition of Ohio University and its students, the Marching 110 is a prestigious group, and a talented one to be sure, with a legacy many alumni can feel tremendous pride for.

It all began in 1923 when the first OU band was founded by a student at the time named Homer Baird. He felt the school needed a marching band, so he organized a group of musicians and pitched the idea to them.

From that group of 40 or so musicians blossomed a group of 110 marching Bobcats. Contrary to popular belief, the program does not only admit 110 members. Today, the group has grown to 219 members but they are still referred to as the Marching 110 to keep the tradition going, and because the group now uses the “110” to describe the amount of effort the members give all the time, both on and off the field. 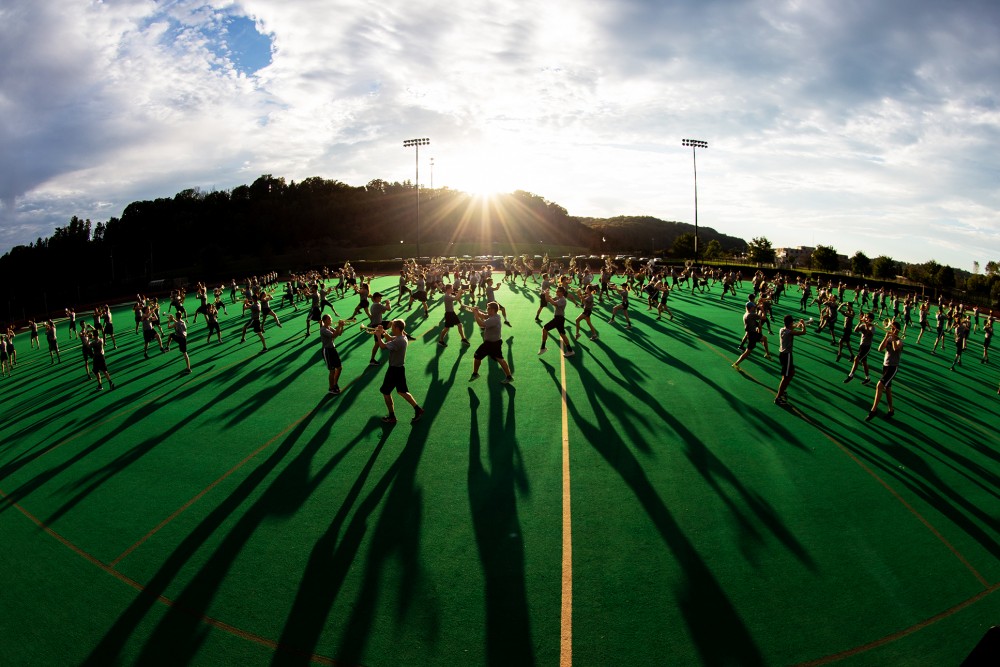 The Marching 110 goes over formations during practice at Pruitt Field.

Becoming a member of the band is serious business. The audition process can be intimidating, especially for incoming freshmen. The auditions are initially done through electronic recording, and if accepted at that point, then prospective members come in.

“The initial audition is 100 percent based on music skills,” Josh Boyer, assistant director of the Marching 110, said.

After new members are admitted, there is a second audition of sorts that evaluates marching ability. They’re in the band, but whether or not they march is dependent on both marching and musical skills.

“I didn’t make it my freshman year, and it was soul-crushing,” Shannon MacLeod, a senior studying integrated science education, said. “My second year, I auditioned again, and when I opened the email and saw that I was in, I couldn’t believe it. It was completely euphoric.”

The 110 is a highly celebrated band, and there are high school students who dream of being part of something so special.

“It was something I had been working for since my freshman year of high school,” Megan Pesicek, a junior studying microbiology, said. “I was just full of excitement when I found out I made it.”

Getting in shape for the 110 experience is no easy feat, though. Once new members are admitted to the band, they have to get used to both the physical activity and the natural elements they may face during the season.

“It’s very hard to get in shape for the 110,” Pesicek said. “The directors really emphasize getting acclimated to the heat and humidity and performing in those conditions. It’s exhausting, but really rewarding.”

“You can see the energy and excitement all around. They’re reacting to the crowd and reacting to each other, and all the hard work really paid off.”Josh Boyer

It is not an easy task to become a member, and the schedule for admitted members is a huge commitment. The 110 consumes several hours of the members’ weeks with rehearsals every day and extra rehearsals some days. There are rehearsal commitments, performance commitments and other events the members are required to attend throughout the season.

It’s a full-time job, but all of the struggles and hard work become worth it on game days.

“My favorite part is right after the performances, when they come off the field,” Boyer said. “You can see the energy and excitement all around. They’re reacting to the crowd and reacting to each other, and all the hard work really paid off.”

All the practicing and perfecting during rehearsals doesn’t compare to the energy they get from performing and being so celebrated by the crowd.

The 110 is the essence of fun and OU celebrity all the time for the members, but there is something about Homecoming weekend that kicks it up a notch. The energy, the confidence and the enjoyment of band members, alumni and everyone watching is beyond words.

“The best part of Homecoming has to be the postgame show,” Boyer said. “The alumni and the current members are intermixed, and it’s really relaxed. And the sound of 600 to 800 people playing together, it’s so loud and just amazing.”

Current members have the chance to meet people who played in the 110 years before them. Their experiences are obviously different, but parallels can certainly be found even though time has passed.

“Alumni can only come back once a year, so it’s really special,” MacLeod said. “Last year was the 50th year, and I was marching with someone who had went to the Macy’s parade when they were here, and I was going that year. It was just a grand ol’ time.”

The alumni coming back to campus offers a chance to see old friends and make new. The 110 is truly a family that transcends generation after generation.

“It’s one big party on the field,” Pesicek said. “Current members see their old friends and meet their new family members. The sense of tradition that’s felt is really special.”

There is a joint cause for celebration after the performance, as all the stressful parts are over for the weekend. Everyone can enjoy what it means to be Bobcats, and Marching 110 Bobcats at that.

“Dedication, passion and family,” Boyer said. “The whole experience and the bond of 50-plus years, it never goes away.”

The theme for the 110’s Homecoming program for this year has the theme of “Boston,“ but the overall Homecoming theme is “Athens State of Mind” and the idea that the experiences had here, stay with alumni forever. That’s what Homecoming is all about, and for 110 members, no matter the age, they always have a spot with that family.